If you’ve ever heard of a flying fox and thought it sounds like a scary and improbable creature, we’ve got some good news and some bad news for you.

The good news is that flying foxes aren’t foxes at all. In fact, there are 199 species, and a fox ain’t one.

The bad news is that they’re actually a family of megabats measuring over 1.5m (5 feet)! They have heads that resemble a fox, with small ears and large eyes. 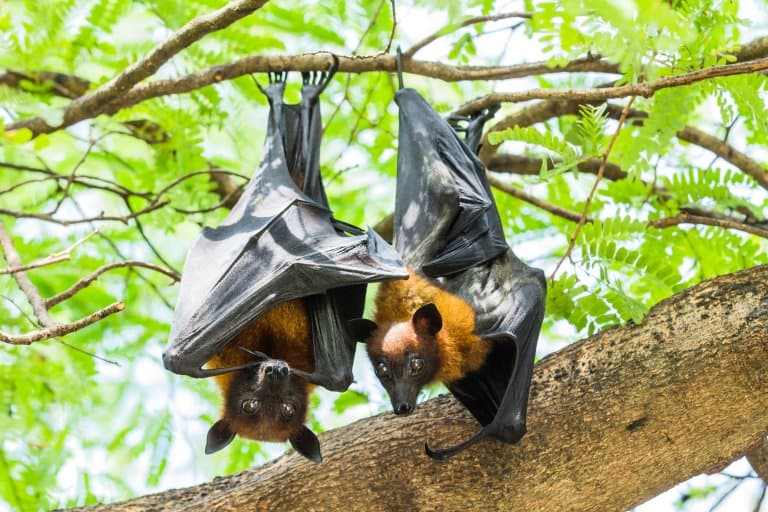 The flying foxes are enormous bats, with the largest wingspan of any bat. The name refers primarily to bats in the Pteropus and Acerodon genera, but with numerous other big bats being referred to as ‘flying foxes’, it’s better to group them under their family name: Pteropodidae.

The majority of flying fox species are nocturnal and forage at night.

They are also referred to as ‘fruit bats’ (although not all fruit bags are flying foxes), due to their diet of fruit, but they will also eat flowers, nectar and occassionally insects as well. While they may look quite scary at first, they don’t drink blood, like vampire bats.

These are the largest bats in the world, and they’re surrounded by myths, legends and mysteries. They are also, unfortunately, hunted to dangerous lows, with some species facing extinction.

Scientific names are usually either Latin or Ancient Greek. In the case of flying foxes, they’re the latter.

The affix “-ptera” or “-ptero” refers to wings; which is why, if you’re into prehistoric animals, you’ve probably seen it in pterosaur (winged lizard) or archeopteryx (old wing). It’s a good word to learn because it’s used a lot in biology -even in plants; it can also mean petal, as in the little sunflower B. macroptera. (long petal).

Put them together and you get Pteropus: winged feet. It’s also where the family name Pteropodidae comes from. 1

2. Their wings are actually skin stretched between ‘fingers’

These delicate bones provide the frame for the flexible membrane. Only their thumb is left free, which has a large claw, which is used for climbing and grooming. 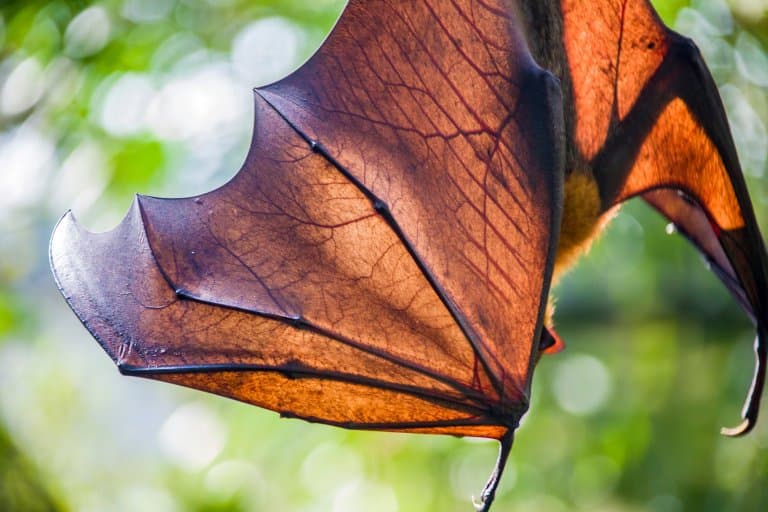 3. Their lineage is a bit of a mystery

While there are enormous populations of these amazing animals dotted about over the tropic and subtropic regions of the planet, very little is known about where they came from. It’s thought that at least 61% of their fossil record is missing, and this makes them hard to understand, from an ancient, taxonomic perspective.

With advancements in DNA sequencing and molecular taxonomy, however, these mysteries may be lessened a little. Still, ancestry and evolution are hard to establish without good fossil records that can be accurately dated. 2

4. Almost 8% of species are not yet measured

Even among the living, there’s a worrying lack of information. Nearly 8% of species of flying fox have too little available data on them to be classified in terms of the threat of extinction.

This means that they could be at risk without us knowing.

They wrap them around their body, and help conserve body heat when hanging upside down to rest. 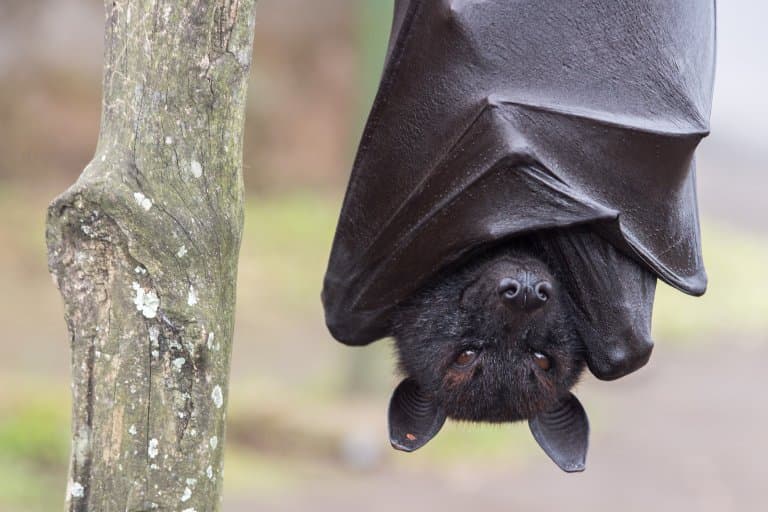 6. The world’s largest bat is a near-threatened “Wingfoot vampire”

Pteropus vampyrus, the enormous flying fox from Asia, is not nearly as scary as it sounds. It feeds on both fruit and nectar from flowers and therefore is an important pollinator and distributor in the forest.

Sadly, however, it’s being hunted for food and is currently listed as ‘neat threatened’ by the ICUN. 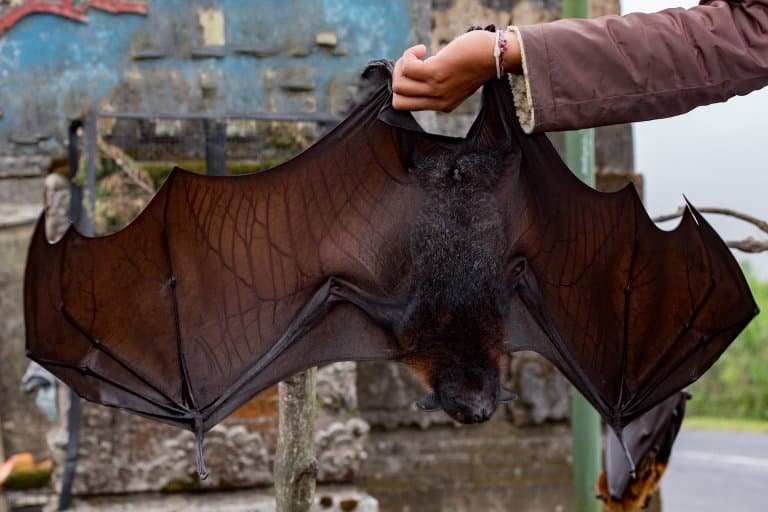 When bats feed on flowers, they pick up and distribute pollen between plants. As such, they’re significant pollinators in the forest.

When studied, one population was seen to visit over half of the tree species in the forest, with 79% of the canopy trees visited. This huge diversity makes them a powerful contributor to the forest ecosystem, and not just because of the way they eat.

When these animals eat fruits, many of the seeds from the fruits pass through them unharmed. Which makes their poop, or “guano”, another valuable resource for distributing seeds.

Finally, this guano is high in nutrients for plants too, so it acts as a fertiliser for the nutrient-poor rainforest soils. 3

Some colonies have tens of thousands of individuals in them. The grey-headed flying fox has an average colony size of 20,000 individuals.

This is an impressive number of bats, and enough to block out the sunset when they all come out at once, but nothing compared to the largest bat colony in the world: around 15-20 Million free-tailed bats (regular, boring bats – not flying foxes) in Texas. 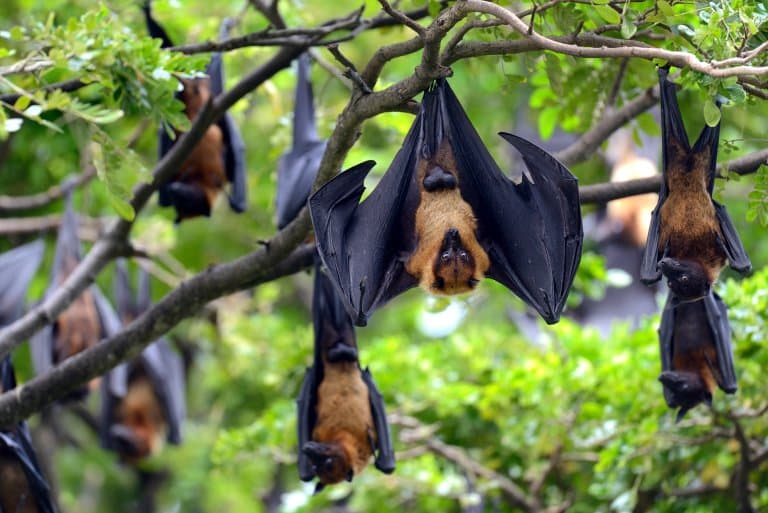 Unlike most bats, flying foxes have lost the ability to use sound to find their way around. This skill is mostly used in bats who hunt moving objects such as insects and frogs but since flying foxes eat things that don’t run away, and since evolution functions on a “use it or lose it” basis, these bats lost it.

In its place though, they developed a much more advanced sense of smell and their eyes work pretty well, so they didn’t totally lose out. Flying foxes are challenging the old adage “as blind as a bat”. 4

10. Some embark on epic migrations

In Australia, a species of flying fox has been recorded flying 2000km up and back, stopping at different locations for feeding and resting along the way.

11. They partake in belly ‘dipping’

Bats often try and cool down by fanning themselves while they rest.

However, when this doesn’t help, they fly low across a river and dip their belly into it, just skimming the waters surface to help cool down – and drink the water from their own fur!

12. They have slow reproductive cycles

Megabats in the Pteropus genus, with the largest number of flying fox species, have all pretty much got the same reproductive pattern. Females give birth to one batlet (called a pup) per year, and can take almost 200 days to gestate.

On top of this, weaning continues for up to six more months, and dependency lasts around a year. Sexual maturity can take yet another year.

Any animal or plant that is slow to reproduce is vulnerable to threats of extinction. If the rate of death outpaces the rate of reproduction, populations go into decline, and flying foxes are, in many cases, suffering from this effect.

Not only are flying foxes hunted for their meat, but in many places, they’re culled in their thousands to keep them away from crops. In some countries, licences are given out to hunt them in their tens of thousands for this purpose but there is a lot of evidence that the culls don’t have the desired effect and can lead to devastating losses of biodiversity.

Habitat destruction is another serious threat to fruit bats, and multiple species have already disappeared since the 1800s.

As the world population grows, and the demand for animals and other high-value foodstuffs increases, more land is being cleared to produce it. With the two-pronged attack of habitat destruction and the hunting of these animals for their meat and teeth, many species will be soon extinct without careful intervention. 5 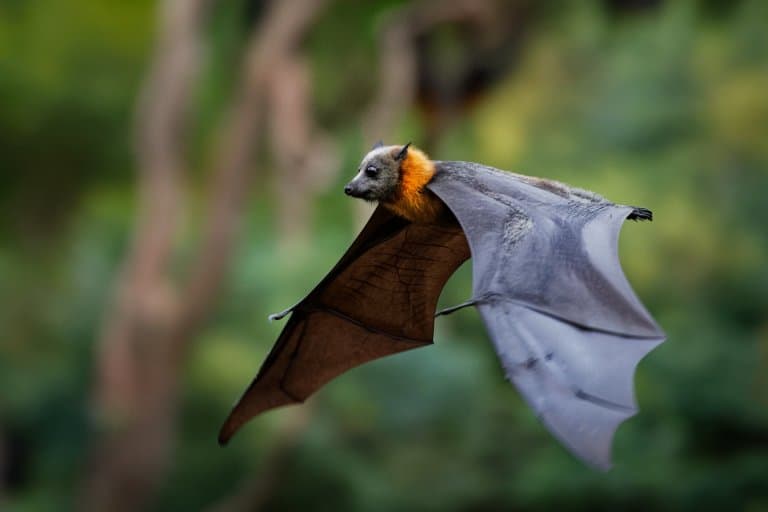 14. Some species are making a dramatic comeback!

However, it’s not all doom and gloom. With a concerted effort, these species are more than happy to bounce back, as demonstrated by the Pemba flying foxes off the East coast of Africa.

Once considered a local delicacy, there are now well over 22,000 (number recorded in 2008) enjoying their time in Tanzania. This remarkable comeback demonstrates the positive effect of education and conservation efforts to protect these essential pollinators over the globe. 6

Flying foxes carry several viruses which can be transmitted to humans, which can cause rabies and other fatal illnesses. 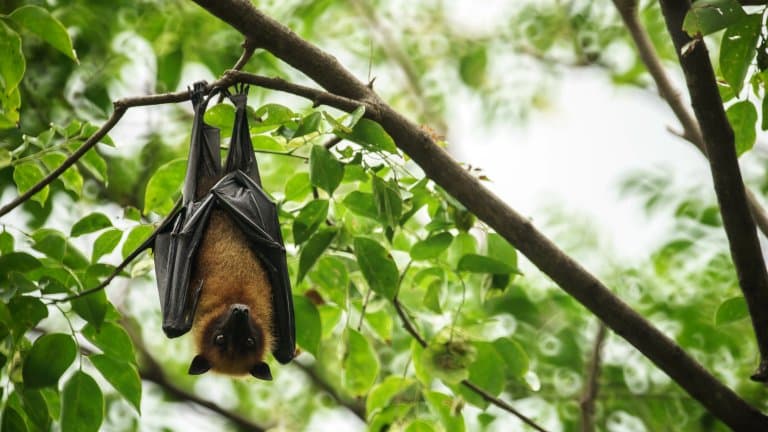 Other bats such as the incredible hammer-headed bat are currently being investigated as a resevoir for the Ebola virus.