You’d think the largest animal in the Coleopteran order would be a focus of interest in zoology, but it seems to be that there’s an elusive animal with this description in the Amazon rainforest that is very good at guarding its secrets.

The titan beetle may be the heaviest beetle, and a top contender for the largest in the world, yet it’s shrouded in mystery. 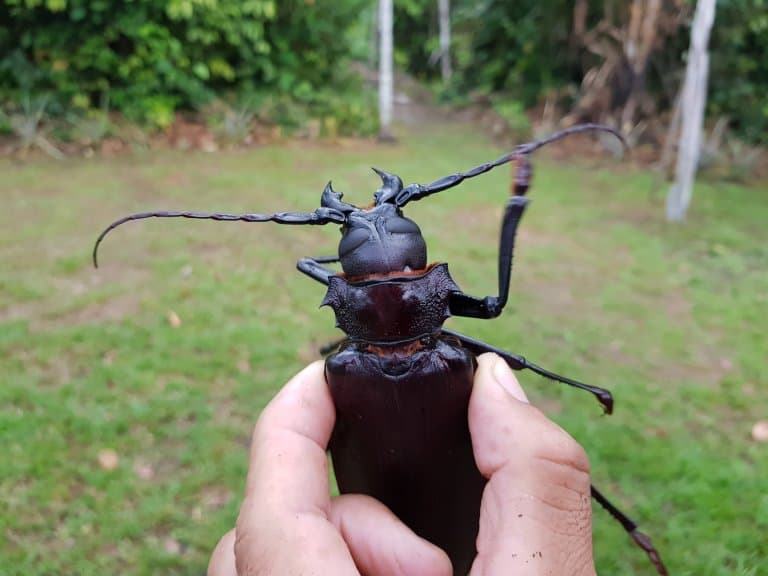 Titan beetles are awesome. They’re one of the largest insects on earth, and even for beetles, who represent one of the most diverse and widespread orders in the animal kingdom, they’re pretty outstanding.

While they look a little like a cockroach, they’re a type of longhorn beetle; beetles known to have frightening defence mechanisms and clever reproductive strategies. They spend most of their time as larvae in the ground, but incredibly nobody has ever scientifically documented one.

Still, and despite being huge and widely prevalent in many countries, this animal has somehow slipped through the cracks in terms of biological research. What do they eat? Do they eat? What do their babies look like? We have yet to find out much about all of this.

In the meantime, here’s what we do know about this fascinating beetle.

Way back in the Carboniferous period when bugs ruled the earth there were some serious giants that would put today’s arthropods to shame. They were able to get so large because the atmosphere had more oxygen in it, and since arthropods breathe through their skin, the atmosphere limits how big they can get because the larger they become, the less skin they have relative to their body mass.

Nowadays, oxygen levels are much lower, and this puts a lower physical limit on how big skin breathers can become. The Titan beetle is thought to be pushing this very limit!

As such, the body of the titan beetle is considerably larger than the Hercules beetle, and it is believed to be the heaviest (in non-larvae stage of life). 1

Despite their phenomenal size, we don’t even know what their babies look like.

Titanus larvae are still unknown to science, which is just silly, really, since we expect them to be enormous. This means we don’t know the breeding cycle, the development period or what kind of stories they tell their children at night.

One thing that’s hypothesised about their larvae is that they must be larger than the beetle itself, which, in the case of a 7-inch beetle could mean there’s a foot-long grub out there somewhere.

Boreholes in trees have been found that are believed to have had titan beetle larvae, and using those measurements – it’s estimated that they could be 30cm long and 5cm wide.

From the little we can gather, it looks like these beetles don’t feed into maturity.

There are some gut contents found in adult samples, but these may be relics from their infancy (more on that in a minute). As adults, it seems like they’re no longer interested in taking food or water, and may simply be set up for mating – and subsequently dying soon afterwards. 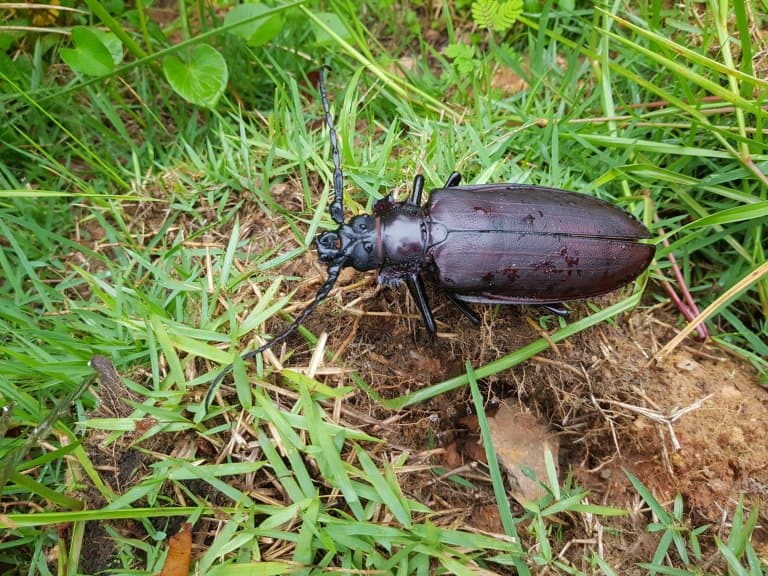 Titan beetles might be thought of as gentle giants. They’re enormous, as we covered, they don’t predate on anything at all, and they have quite small brains, relative to the size of their bodies.

These brains have very large optic and antennal lobes to handle a wide range of sensory inputs, but there isn’t much left after that.

Since there isn’t much information available about these beetles yet, some things we can infer from looking closely at them, and others we just have to infer from other members of their family.

5. Males can fly, but not from the ground

They are just too heavy to fly directly from the ground. They have to climb trees, and launch themselves into the air to be able to fly.

Like many large adult insects, titan beetles find their mates by flight and sensing air chemicals (pheromones). Females have wings, but can’t fly.

6. They can reproduce parthenogenetically

This is, of course, one of those inferences. Since we’ve never seen them in action, we don’t know much about their breeding at all, but other, similar beetles can reproduce without sperm.

If this is the case with Titans, it’s probably a recent adaptation, since the females still possess the spermathecal receptacle for housing male sperm. 2

Like many insects, Titan beetles make use of composite eyes, but in these beetles, the eyes take up around a third of the head. They’re made up of hundreds, maybe thousands, of hexagonal facets that protect individual lenses beneath, attached to retinal cells under each one.

What’s quite interesting is that on the edges of these eyes, the hexagonal shapes appear to get less and less well-defined as they get further from the centre of the eye. They sort of devolve in shape until they’re almost square.

This suggests that these beetles have a wide field of view, with higher resolution towards the centre of their vision, decaying in quality in the periphery. These patterns are typical of diurnal insects, and that the weaker, irregular facets are responsible for orienting the animal in relation to sources of light.

8. As larvae they eat dead wood, we think!

Adult beetles might not feed, but they were once larvae, and while most of their outside looks very different, there are similarities on the inside, including the original larval gut. Inside this gut researchers can poke around and investigate the contents to figure out what the larvae ate.

If there’s no food, all is not lost! The enzymes in a digestive system can tell us a lot about what it’s designed for, and it appears as though these beetles can break down cellulose and have very little ability to digest proteins. That suggests that the primary diet of these beetles, at least in their larval state, is rotting wood.

If you’re ever lucky enough to find this out first-hand, you’ll never forget it.

The hissing screech of many longhorn beetles is a remarkable deterrent to an unsuspecting predator (or biologist), and at least in the latter case, results in the insect being released with a sense of immediate urgency.

10. Their mandibles that can cut straight through a twig, or finger!

If the screeching doesn’t get you, the biting might. These animals have exceptionally robust mandibles and can give a very nasty nip if they feel threatened.

It’s said that their powerful jaws can cut through a pencil. You’d think there would be higher priorities in beetle research than this, considering what we don’t know about the animal but at least researchers are trying. 3