If you were to set up a nice white sheet at the edge of the forest in South America at around 3 am, and you put a nice bright light behind it, and you were to sit some nice big buckets under that sheet, in front of the light, you’d have set yourself up a light trap.

And in this trap, you’re soon likely to see any number of weird and wonderful creatures drawn to the light. Bugs, beetles, mantids, flies, and everything in between.

One of these animals, if you’re really lucky, will be the longest animal that you’re likely to catch, and also one of the largest flying insects in the world: the hercules beetle. 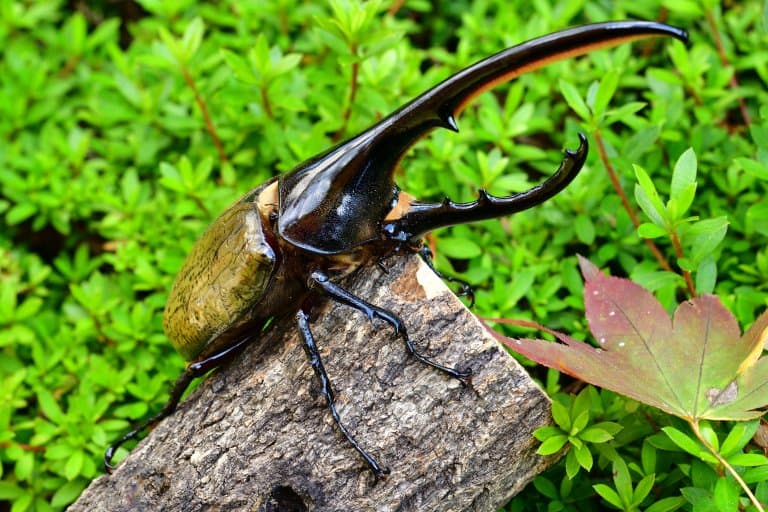 The hercules beetle is a species of rhinoceros beetle, which contains over 1.5k species that include unicorn beetles and horn beetles – and are known for their unique shapes and sizes.

They are nocturnal animals and not much is known about their life cycle in the wild; much has been observed through captive research. From eggs, they hatch as larvae and they can remain in that stage for a couple of years – where it will go through 3 metamorphosis stages and grow up to 4.5 inches (11cms), before it transitions into an adult beetle.

Hercules beetles are, perhaps unsurprisingly, strong and why they are named after the hero of classical mythology. Their true strength is a matter of contention, however, and it’s likely overblown.

Male hercules beetles can grow up to 7 inches long, if you include their horn – which makes them the longest beetle in the world. If you were to measure by body alone, then the titan beetle is likely the largest and heaviest in the world. Still, they’re huge, they have powerful horns, and they are certainly strong enough to suplex one another off of their battle logs.

As larvae the hercules beetle diet on rotting wood. As fully formed adults, they hang around in the leaf litter on the forest floor and feed on fruit and tree sap by carving bark using their mandibles.

They also have some other weird abilities, like being able to reversibly change colour, and… well… zizzing. Check out all these cool things about Hercules beetles.

1. They are the longest beetle in the world

The Hercules beetle is one of the largest flying insects there is. The males have an extended rostrum (nose, or beak) that makes them the longest beetle on record.

This rostrum is called a horn and it’s used the way males of many species use large objects: to fight other males. During these battles, each rival aims to secure the other and lift it up over their head; ultimately throwing them down triumphantly.

In most cases of animals carrying large appendages, it’s a sign for females that the male has so much health and vitality they can afford to waste a bunch of it on some glamourous ornament.

This demonstrates good genes and therefore makes him a good choice for mating with. However, in these beetles, females don’t seem to care about the size of the horn, as long as it gets the job done. 1

2. They have herculean strength?

This beetle is apparently named after its incredible strength, which, according to an article in Science Daily, is said to allow it to carry up to 850 times its own weight.

This article took the fact from the Guinness Book of World Records, which as far as scientific journalism is concerned, is one of the weaker sources.

This claim isn’t backed up by any sources, and an experiment from 1995 where evil researchers put a beetle on a treadmill and loaded it with weights found that they could carry ‘only’ up to around 100 times their weight, with anything above thirty times causing them to struggle with motion.

In contrast, the dung beetle Onthophagus Taurus has been logged pulling 1141 times its own weight, which certainly puts a question mark on the title of “World’s Strongest Insect” for the Hercules beetle. 2

3. They change colour in humid environments

A very strange feature of this beetle (or perhaps a bug?) is that it changes colour quickly from a greenish or yellow in a dry state to a black when it’s humid in the air.

This occurs due to a really cool microscopic porous layer of cuticle that backscatters light when it’s dry and gets clogged up with moisture when it’s wet, giving the beetle its different colour. This effect is immediately reversed when the humidity drops.

Why this occurs remains a mystery, but it could have something to do with predation or mating. 3

4. The horn can be longer than the body

This beetle’s significant facial feature is commonly as long as its body, and in many cases even extends 1.5x the length of the body, giving it a very unbalanced look.

Yet, from the experiments on how it carries weights, scientists were able to determine that it has some mysterious mechanisms of efficiency when it comes to distributing what it’s carrying. 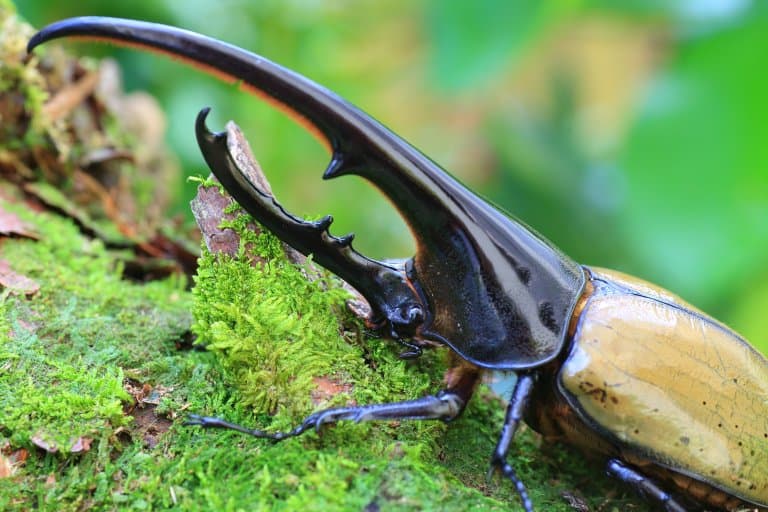 5. Only males have horns

Female hercules beetles are darker in color and do not have horns. They don’t fight each other, like the male of the species!

Sometimes, there’s no better way to describe an animal’s behaviour than to simply quote a passage from the old-timey literature.

This time, from a 1947 paper published in Zoologica: New York Zoological Society:

“Encounters between male Hercules beetles are usually rather brief and are dependent on the willingness of each to fight. One may be feeding or resting quietly when a second male approaches.

Before any actual contact, when still several inches apart, the beetle which is eager for the engagement moves the thorax up and down, producing a rhythmic series of zizzing squeaks.

There is not the slightest doubt that this is heard and understood.

Even if mouth and head are buried deep in mushy banana pulp, the eater gives a jerk on hearing the sound and assumes for a moment what may well be an audient immobility. He may keep on guzzling or may back away practically into the waiting grip of the squeaker.”

These squeaks are produced by rubbing a roughened plate in their abdomen against their stiff wing cases and are also described as a “huff” in a more recent paper.

Regardless, if huffing and squeaking don’t work, these beetles can open their jaws up to 4cm wide, closing them around their opponents and squeezing hard.

Battles don’t usually last long, with the loser being quickly and forcibly removed from the venue.

8. Their pupae are really weird

When metamorphosing between a larva and an adult, the Hercules beetle will form a casing out of faeces and solidify itself into a beetle-shaped cocoon complete with a mould for the horn and a segmented abdominal area that allows it to wriggle unpleasantly as it pupates.

The larvae are enormous, weighing more than 100g, and will go through three stages of metamorphosis to reach their final form.

They spend most of their lives in the larvae stage, which can be around 2 years. The adult stage of their life as a fully formed flying beetle only lasts 3-6 months.

During this time they seek to mate to reproduce and re-start the life cycle!

While their long horns may look dangerous, they are not aggressive and completely harmless to humans as they don’t really bite or sting.

However, if you pick one up, it may scratch you with its strong, spiny legs.

They are sometimes kept as pets and depending on the size and subspecies, an adult beetle can cost you up to $500. They are actually quite fragile and need to be held with care. 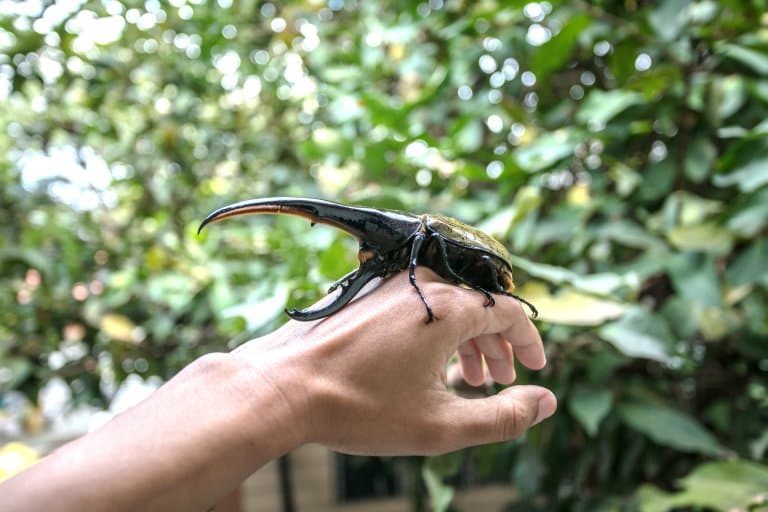