Molluscs are a strange bunch. From the docile herbivorous garden slug to the intelligent and Colossal deep-water squid, they come in a range of shapes and sizes and various levels of lethality.

Most of the dangerous ones are cephalopods, like the blue-ringed octopus, or the devil squid, but conus textile, or the textile cone snail may have the most potent venom known to science.

The textile cone snail is one of the most toxic animals alive, and named after the beautifully ornate shell it possesses.

They inhabit coraf reefs, mostly in the Indian Ocean, as well as East Africa, The Red Sea and around Australia and New Zealand.

Previously known as Gold Cloth snails, these are covered in pretty golden feather patterns that gave rise to their nickname “Partridges”. Yet these are not to be taken lightly. They’re armed with a dextrous harpoon containing a fascinating combination of venoms, than can, and has killed people.

They normally hunt snails, but they’re more than capable of defending themselves against much larger animals, and this venom is so curious that it may even pose a national security threat.

1. It’s one of the most venomous creatures on earth

Textile cone snails have been known to kill people, and as members of the cone snail family Conidae, are one of the most toxic after Conus geographus.

It’s possible that the venom inside a single snail is enough to kill 700 people. 1 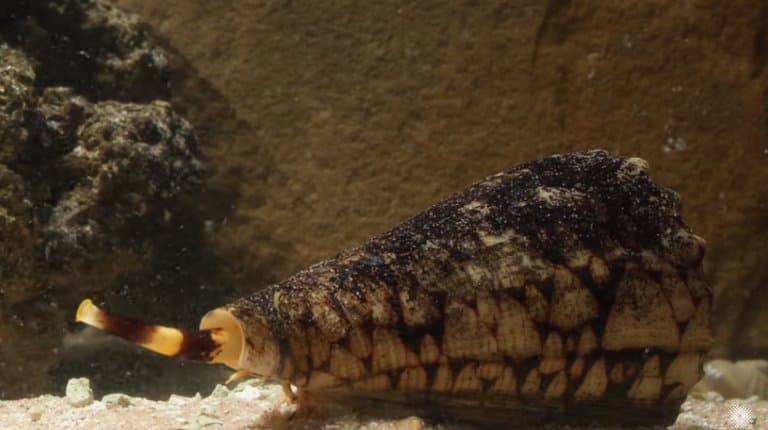 2. They can be frighteningly dangerous

This venom is no joke! The earliest account of human death from a cone snail (though possibly C. geographus) comes from 1705, in a report of a slave woman who –

“Only held this little Whelk in her hand… And while she was walking to the beach, she felt a slight itching in her hand, which gradually crept up her arm and through her entire body; and so she died from it instantaneously”.

Many sources attribute this record to C. textile, though it might have been the more potent fish hunter, C. geographus. Regardless, it does go to show how powerful a cone snail’s venom can be, and there are deaths attributed to the textile cone snail too.

These snails are quick to sting, and their harpoon-like stingers can pierce wetsuits. The sting is sometimes almost painless and quickly followed by paralysis. Sometimes it’s painful and comes with multiple other local and systemic symptoms. However, the painless nature of many of the stings has led to a curious discovery. 2

3. In some contexts, their venom can have the opposite effect

There’s often a gruesome and horrific element to scientific discoveries, particularly in the study of venoms. Commonly, to study the potential effects of a toxin, scientists will inject other animals with it.

This is ethically questionable at the very least, but much like the unforgivable barbarism conducted by Nazi scientists, there is valuable medical information that we use today as a result.

As it happens, there’s a significant analgesic (pain-killing) component to Conus textile venom, and this has shown promising potential as an acute pain treatment for people who don’t respond to, or can’t receive, opiates. It’s suggested that venom has similar effects to morphine but without the risk of addiction.

Sadly, accounts of how this conclusion was reached, and the effects on the mice who ‘helped’ with the research do bring up questions as to whether it was a worthwhile endeavour. 3 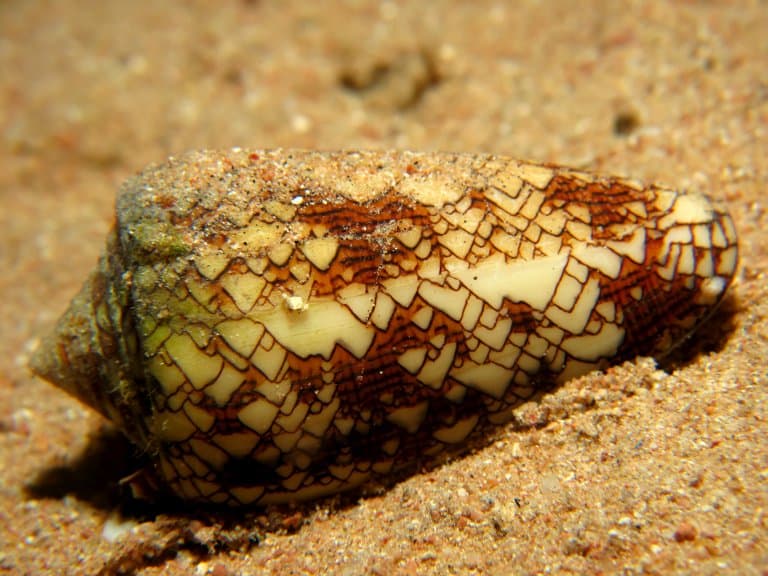 The dangerous part of this snail is the adapted radula, which is basically what a snail uses to eat. In your typical garden snail, this is a toothy plate-like tongue, that’s used to scrape across the surface of a leaf, tearing off tiny, edible pieces. In the cone snails, this has morphed into a terrifying venomous proboscis that can reach almost all across its body.

It uses this to kill and eat snails, which, being smaller than fish, means it doesn’t need quite as powerful venom as its fish-eating cousins. Still, there are some curious discoveries about the diversity of cone snail venom that might suggest this isn’t as reassuring as it sounds…

5. They hunt primarily by scent

Even though they have eye stalks either side which can peer outside of their shell, they hide within the sea bed sediment with just their siphon sticking out which acts as a breathing tube. They use this to hunt by scent.

6. It uses a different venom for prey and defence

The fish-eating cousin C. geographus has been studied in great detail and is providing science with some fascinating discoveries. Venom is essentially a cocktail of small proteins that affect different things in different ways. In this case, the venom used for hunting seems to be a specific blend of these proteins, specialized for affecting the species of fish it prefers, and seemingly inactive in humans.

Yet this snail has a backup venom, and when threatened, releases this much more lethal blend of toxins that can quickly result in human death. This strategy applies across all cone snails, and it’s thought that they evolved a defensive array of toxins to protect against predation, something which then enabled them to hunt much larger prey.

This remarkable ability to switch back and forth between these conotoxin venoms is an incredible adaptation that is shown to be continually evolving and seems to be present only in these snails. However, some are concerned with its potential. 4

7. Scientists are worried they could be used for bioweapons

Venoms contain mostly proteins, and proteins are chains of amino acids. These chains vary in length from simple to complex; the simplest being things like hormones and enzymes, and more complex being structural proteins like keratin. For example, the protein in your fingernails has over 550 amino acids linked together. Insulin has 51, and snail venom ‘conotoxins’ have fewer than 30.

The composition of these tiny toxins also seems relatively simple, and all of this has led to concerns that they could be quite easily replicated. Hypothetically, someone with access to a lab and some seriously bad intentions could piece them together in large quantities and their potency makes them easy to distribute with devastating consequences. 5 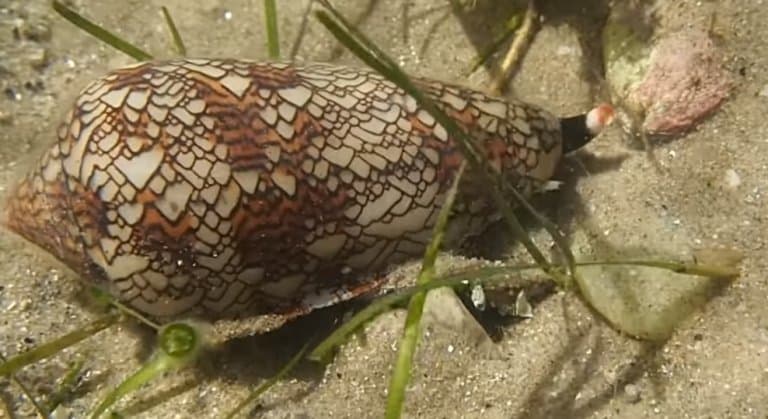 8. 30 human deaths have been attributed to cone snails

A 2004 Nature.com report indicates there has been around 30 recorded instances of people dying after being stung by cone snails.

In reality it’s thought that there are many more deaths than those recorded.

The latest incident was in 2021, where a teenager picked up a textile cone snail unknowingly and nearly died. If you see one of them, don’t pick it up!