Stick insects are an extraordinarily diverse order of critters who feed on and resemble either sticks or leafs across several continents.

Although they resemble and are somewhat closely related to mantids (such as the praying mantis), they have some unusual and unexpected relationships with other insects. 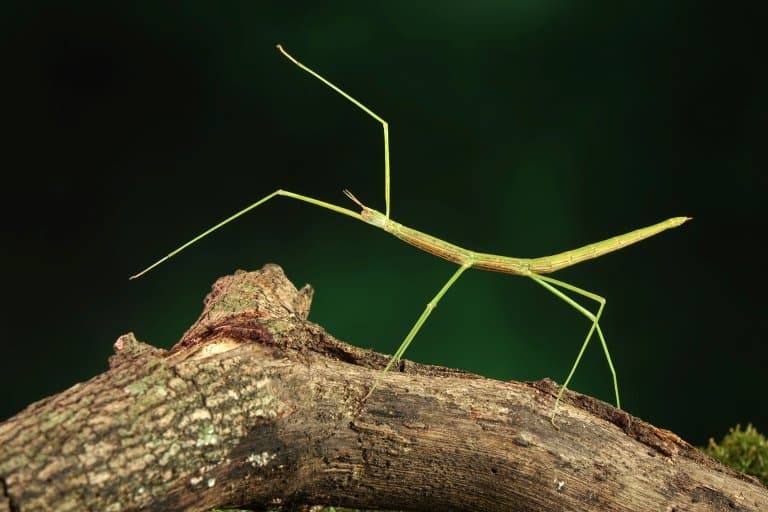 Stick insects are very diverse. So much so that nobody has done a very good job of classifying them yet. In this piece, we won’t go much into the taxonomy because the chances are by next week it’ll be out of date.

Suffice it to say that they’re a large order of twig-like insects that may or may not be related to cockroaches and termites.

Think of them like herbivorous mantids, supremely camouflaged against the foliage they live amongst, hiding in shrubs and forests, on almost every continent on Earth. They’re harmless, but if they wanted to, they could totally sneak up on you.

They are also sometimes called stick-bugs and walking sticks as they mimic the natural environment they live in. While they mostly look like sticks or leafs, they can also look like bark and moss to further blend into the background in the tropics.

1. They can grow up to two-feet long

Most stick insects are somewhere comfortably between half an inch (1.75cm) and 4 inches (10cm) long. There is one species, the Bornean stick insect Phobaeticus kirbyi, however, that reach an enormous 13 inches (33cm) long, making it the third-longest insect in the world!

But, there’s more! The second-longest insect in the world is also a stick insect. In fact, it’s one in the same genus, Phobaeticus chani, known as Chan’s Megastick. This monster from Malaysia reaches 22.3 inches (57cm) with its legs outstretched; its body alone measures over 14 inches (36cm)!

You must be wondering right now what the longest insect in the world is. It may come as no surprise that this is also a stick insect. Discovered very recently, in 2016, and not yet identified to the species level, the record for longest stick insect belongs to an unclassified member of the Phryganistria genus.

This phenomenal stick has been documented as having reached 25.2inches (64cm) long – or nearly 2 feet in length!. So far, this is the longest insect known. 1 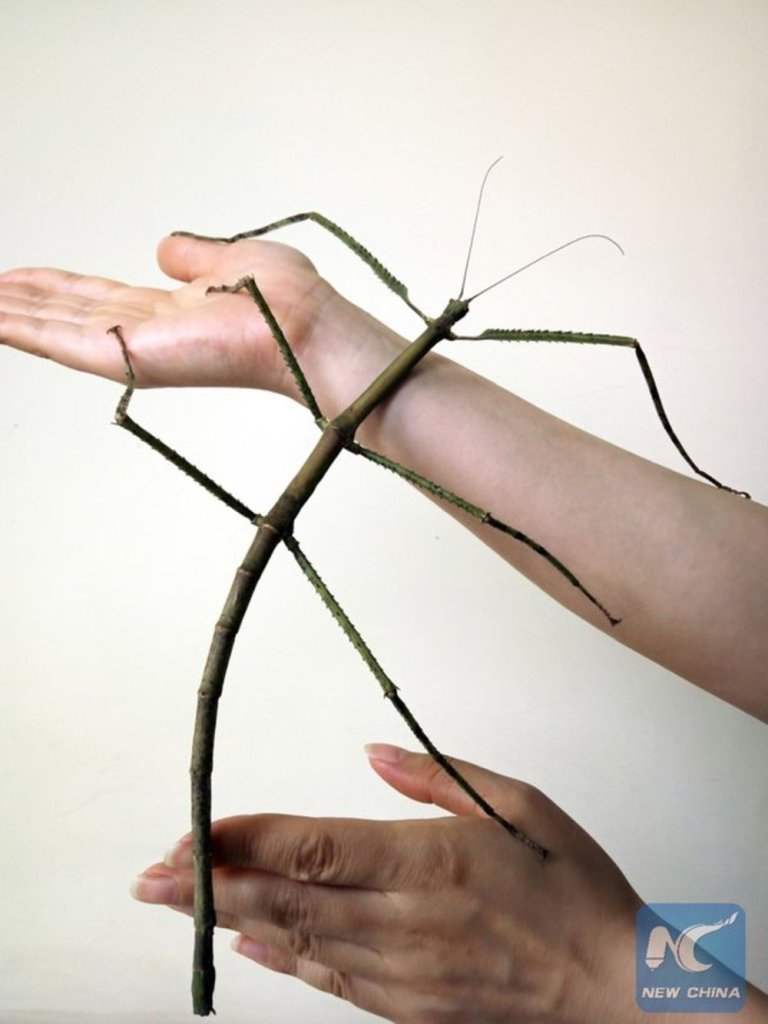 2. Their taxonomy is really complicated

As mentioned in the intro, scientists are still trying to sort all these twigs. While they look like mantids, stick insects are turning out to have a range of connections we didn’t expect.

It was recently discovered that termites are a form of eusocial cockroach, rather than being (as they appear) related to ants, and that really shook the boat. Now mantids and stick insects might be part of that extended relationship, but it’s unclear yet whether that’s the case.

As of now, stick insects have been moved out of the Orthoptera order containing grasshoppers and crickets and designated their own distinct order of Phasmatodea. But even that’s being challenged as people want to rename it to something easier to pronounce, like Phasmida.

The issue arises when animals look pretty much the same. How do you tell one stick from the other?

The order of stick insects contains remarkable convergence in its evolution, meaning totally different lineages look alike. This makes it very tricky to categorise them. 2

3. They have a range of defence mechanisms

They can play dead, known as ‘thanatosis’, where they are completely motionless.

If that doesn’t work, they can also use ‘startle displays’, which means quite the opposite from playing dead, where they display bright colours and make loud noises to scare off predators!

They can also perform a startle display where they show their bright colours, before dropping to the forest floor and hide their colours again.

Some species also have spines on their legs, which can be used to attack predators. 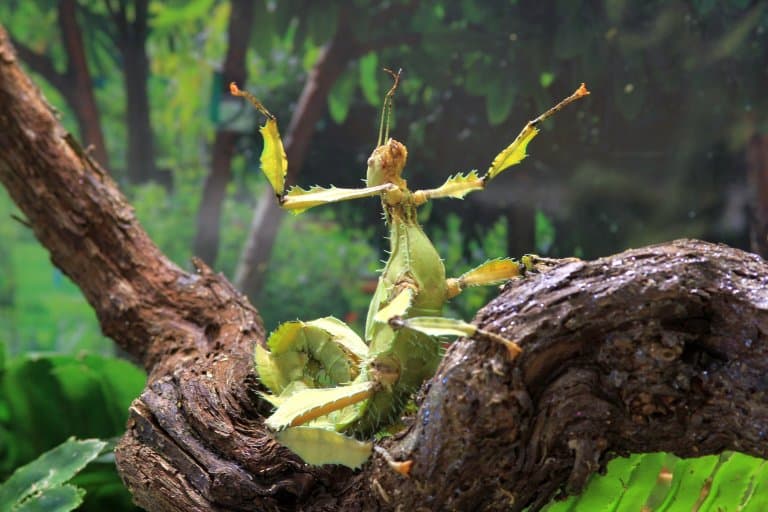 4. They can release stinky goo when threatened

Camouflage goes a really long way towards keeping stick insects safe. If an animal can’t see it, it’s less likely to eat it. But if that stops working, some stick insects have a pretty gross way of defending themselves.

When threatened, many species of stick insects have an arsenal of chemical defences.

These chemicals can be oozed or sprayed or secreted in various ways, but all serve to make the animal quite unpleasant to eat. Gross. 3

5. Some species have wings

Around 40% of the 3,000 species of phasmids are fully winged. Often it’s only males that have wings, but some female species do as well.

In general they are fairly clumsy flyers, and often use their wings as parachutes – or as a desperate way to escape a predator.

Some smaller winged stick insects have bright wings, to help with startle displays. 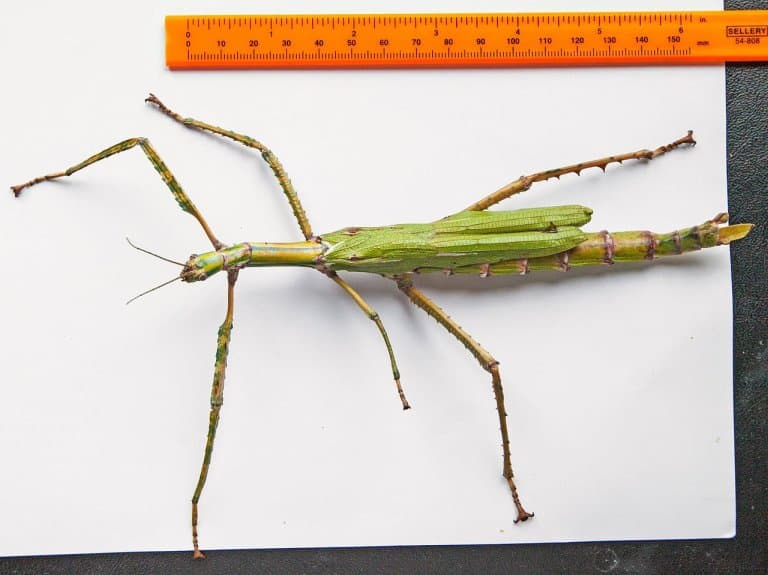 6. There are even Phasmatids in Europe!

Although primarily associated with tropical and subtropical forest regions, stick insects have a dizzying range of habitats. In Europe there are so far 17 native species recorded, split among four genera.

Even sunny old England has a few species, but they are thought to have been brought over from New Zealand. The Iberian Peninsula has around 13 species.

7. They mimic the breeze

If you’re ever lucky enough to spot a stick insect in the wild, you might notice that it’s rocking.

These insects make side-to-side motions on the branches they’re attached to, and it’s thought that this creates a more convincing effect of camouflage by pretending to be a leaf or a trig moving in the air currents.

Other hypotheses around this behaviour include a way to get an angle on what they’re looking at. Moving from side to side lets them distinguish what’s close and what’s far away. 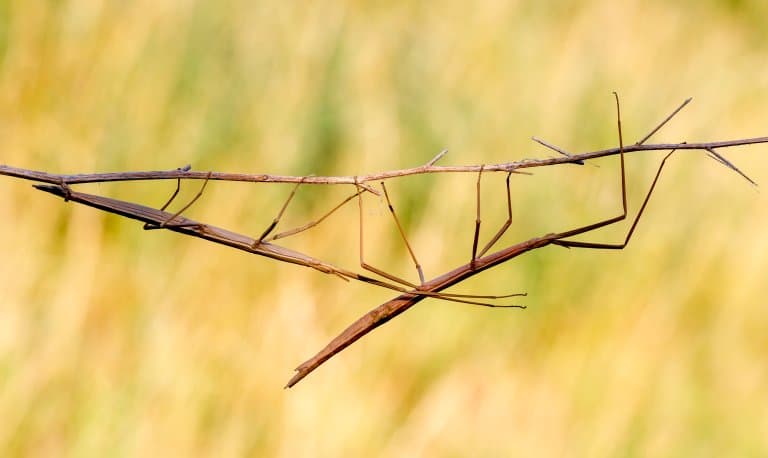 For some apparent reason, stick insect sex takes a long time. Usually, when mating, it’s in the interests of fitness to get in and out as quickly as possible.

Sex can be a vulnerable situation for animals; it makes a bigger target, draws the attention of predators and competitors, sometimes the male is eaten by the female (as in mantids), and in some cases, it can cause you to fall off your log.

Stick insects mate for a long time. These marathon sessions have been documented to last 79 days!

So why do stick insects take their time? It might actually be in the interests of the female to have a sort of human (stick insect) shield during mating. Not only does this create a physical barrier between her and predators, but now she has two sets of chemical defences lined up to retaliate.

9. They have been used as fish hooks

In the D’Entrecasteaux Islands, just off the coast of New Guinea, native islanders have been witnessed using the legs of stick insects as fish hooks.

This suggests that they’re pretty durable as an insect, and have played a role in human development, at least in some places.

Other human uses for stick insects include keeping them in birdcages in ancient China. They were considered good luck. Not such good luck for the stick insect, unfortunately. 4

10. They can reproduce without mating

One of the reasons for long mating sessions may be to demand a higher fitness in the male genes. Female sick insects can afford to be fussy – they don’t need sperm at all to reproduce.

They are capable of producing offspring through parthenogenesis meaning that when no eligible bachelors are available, they can simply sort themselves out. 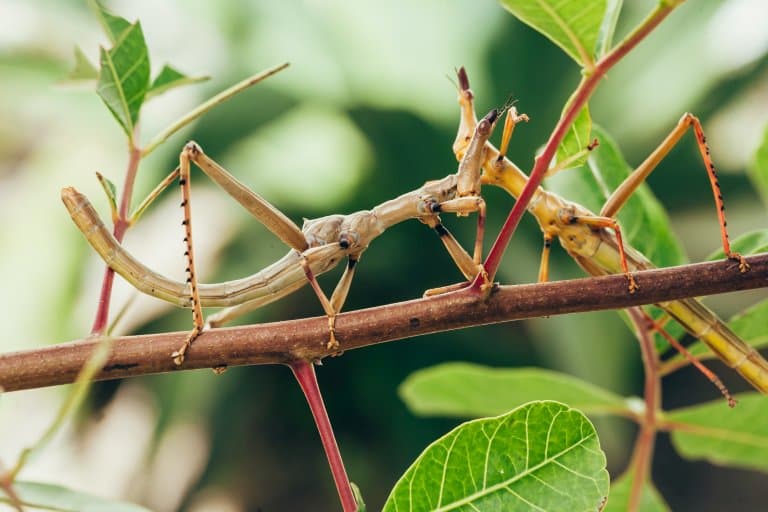 Not only are stick insects the masters of camouflage, but their eggs even blend into the natural environment by looking like seeds.

Female stick insects will often scatter their eggs across the forest floor. This is not as risky as you might think!

Rather strangely, ants are attracted to the eggs, as the end contains a fatty material called capitulum at their tip, which they like to eat.

Ants will carry the eggs back to their nest, feed on the end, and then leave it to one side while the stick insect continues to incubate, before hatching safely inside the ants nest.

12. They can regenerate lost legs

Stick insects routinely shed legs to help escape a predator, which they are able to re-grow.

Some scientists speculate that this leads stick insects to have smaller wings, which in turn makes them pretty bad flyers. 5

13. They can walk up vertical surfaces

Stick insects share the same skill as geckos, tree frogs and spiders – the ability to walk up vertical surfaces, and walk upside down without falling!

It’s long been assummed that the wet fluid on stick insects feet helps them stick to surfaces, however that’s now thought to help them ‘unstick’ from surfaces when needed. They actually have adhesive type pads on their toes, which help glue them to surfaces.

They also have ‘heel pads’ which are not sticky, but hairy – and help them walk along horizontal surfaces, providing grip without being stuck to them!

14. 40% of stick insects are classified as vulnerable or worse

Sadly this is due to human encroachment, pesticides, and habitat destruction.

Some species, such as the Lord Howe Island stick-insect are critically endangered. Bristol Zoo in the UK is the first zoo outside of Australia to successfully breed the species as part of a global conservation programme.

Other species of stick insect are less fortunate, but there are various conservation efforts across various countries.