The Praying Mantis, officially called the European mantis (Mantis religiosa), is one of over 2,400 types of Mantis.

Their common name comes from how they hold their front legs in what looks like a prayer position. However, these legs are actually highly adapted for hunting. 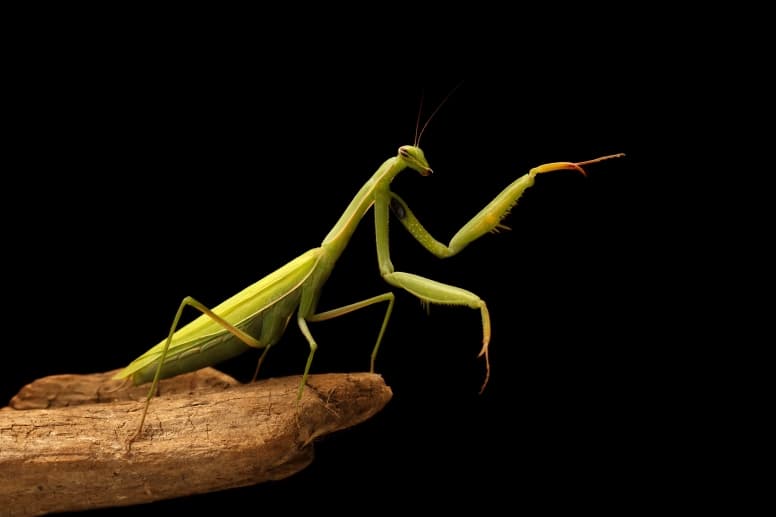 They are native to Europe, along with parts of Asia and Africa, but have been introduced to the US and Canada.

They are well known as phenomenally successful predators, preying on insects such as beetles and moths. They wait in silence for their prey to get close, then lash out and catch them with their strong front arms.

They are solitary, only coming together to mate. Their lifespan is around a year for females and slightly less for males.

1. Mantises are a group of insects containing over 2,400 species.

Species in this group are found all over the world.

2. Their name comes from their posture.

When resting their front pair of legs is raised in front of them, making them look like they’re praying. 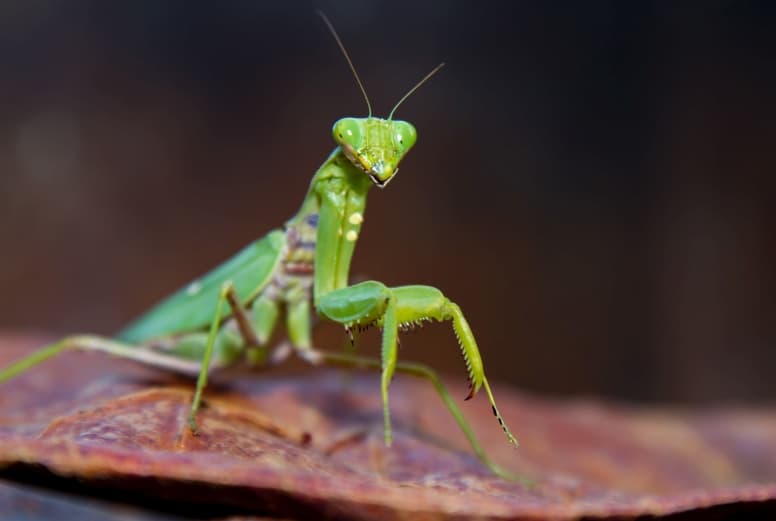 This gives them a great range of vision for hunting. 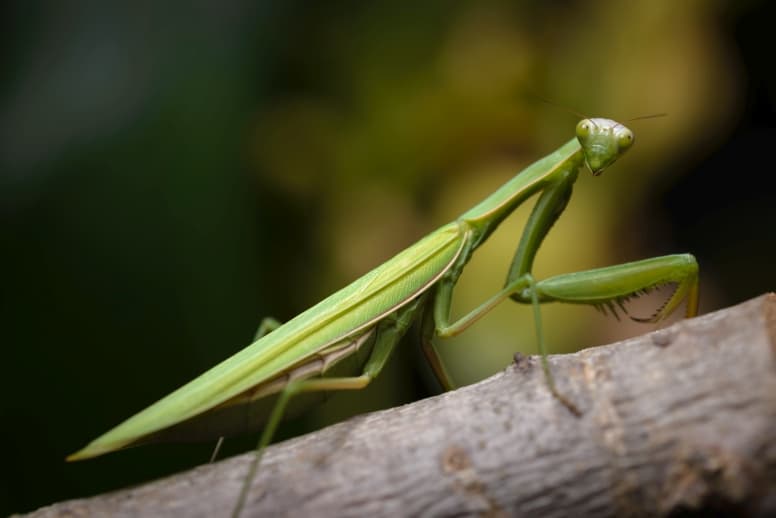 4. Females are bigger than males.

Females are larger at 7-9cm, while males are only 6-7cm. Females also live longer!

5. They are solitary and cannibalistic.

The only time mantises come together is to mate, and when they do come across other mantises, they will likely try to eat them.

6. They have 3 stages of development.

7. They have one ear and it’s on their stomach.

This ear is on the underside of their stomach.

8. Their ear can hear ultrasound, helping them escape bats.

When mantises hear a bat coming, they will dive down to the ground to avoid them. Researchers say they manoeuvre like fighter pilots! 1

9. They are famously good at hunting.

They will camouflage with their surroundings, staying perfectly still, until an insect comes near enough. When one does, they catch them with lightning speed. Larger species of mantis have even been seen hunting small mammals or birds! 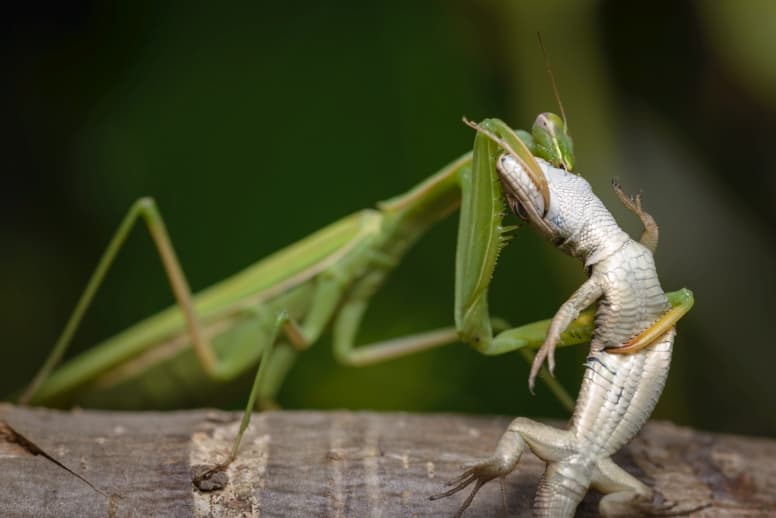 10. Their front legs are super strong and fast.

Their front legs can reach out and grab prey in as little as 50 milliseconds. These legs then clasp the prey tight as the mantis eats them.

11. The praying mantis will eat their prey alive.

Usually, they hold their prey tight with their front arms and then slowly eat them with their strong mandibles. 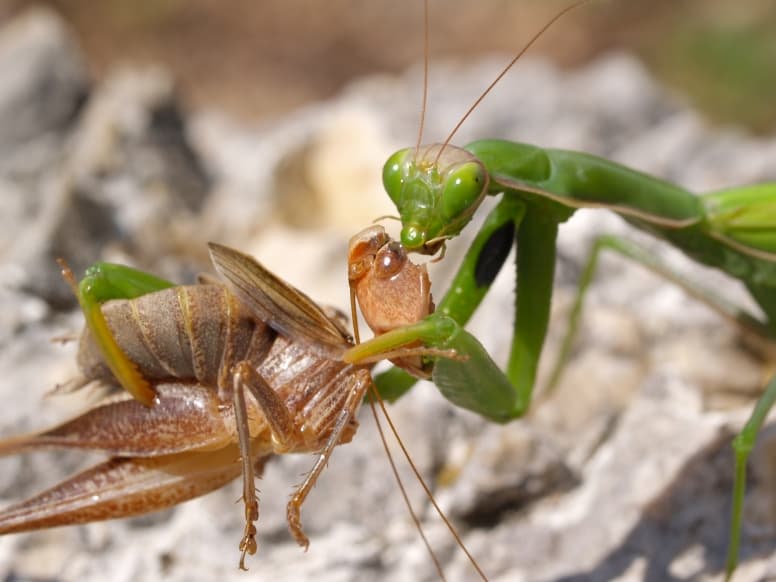 12. Females will often eat the males after (or during) mating.

This is one of the things that mantises are most well known for. If the female can catch the male, she’ll most likely eat him, either during or after mating. It’s thought this benefits the female as it gives her an easy source of nutrients for her eggs. 2

13. When threatened they rear up on their back legs.

They will also hold out their front arms and beat their wings to make themselves look bigger.

14. They are not native to the US or Canada.

Although they are widespread there, they are not native. They were introduced by accident in New York over a century ago.

15. They are Connecticut’s State Insect.

Even though they aren’t native, they have been the state insect since 1977! They are helpful to farmers there as they eat insects that are harmful to crops. 3 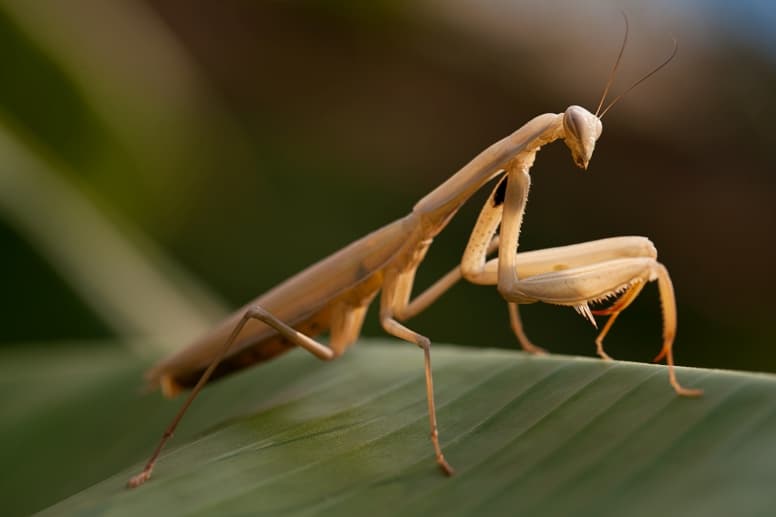