The sperm whale is a carnivorous marine mammal and the only living member of the Physeter genus. They are sometimes called the ‘Cachalot’, and are the worlds largest predator.

They are characterized by a series of recognizable bumps on its dorsal surface, thick flukes, and an extremely large head.

Their name is based on spermaceti, a wax-like substance that is found inside their heads, which can be used in lamps and candles (that scientists first believed to be sperm). 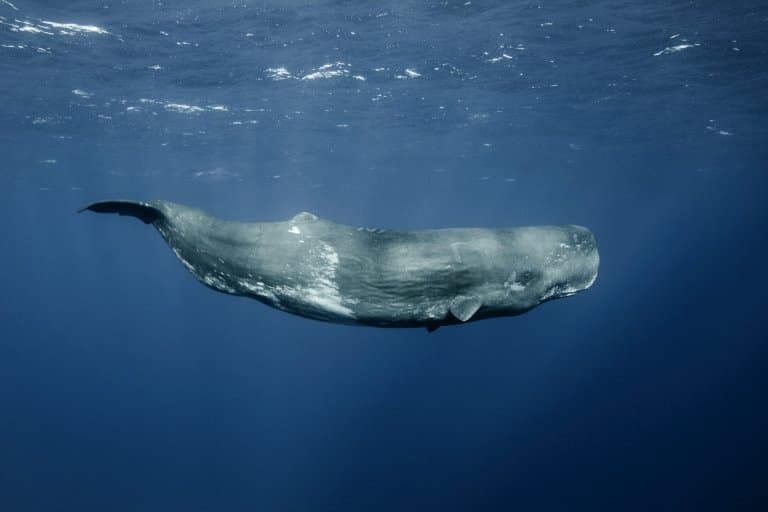 Sperm whales are a species in the sperm whale family, which includes the pygmy sperm whale, and the dwarf sperm whale – both of which are from a different genus, Kogia.

They are the largest of 73 species that make up toothed whales, growing up to nearly 21m (69 feet) in length and weighing up to 80 tonnes.

These magnificent animals can be found all around the globe in marine waters deeper than 3,000 feet below the surface. They can dive for more than an hour at a time, and diet on giant squid, colossal squid, octopus, and sharks.

They migrate seasonally for feeding and breeding and live in matriarchal groups called pods, with mothers and calves. Males are usually solitary, but do return to groups to socialize and breed.

In the 1800s and 1900s, sperm whales were hunted for their meat, oil, and other parts, causing their numbers to drop drastically.

Now, hunting is banned in most places; however, populations have yet to bounce back fully, and they remain a vulnerable species.

1. They have the largest brain of any animal to have ever lived on Earth

Sperm whales have a distinctive shape, with a large block-shaped head, which can make up one third of the whales entire length.1 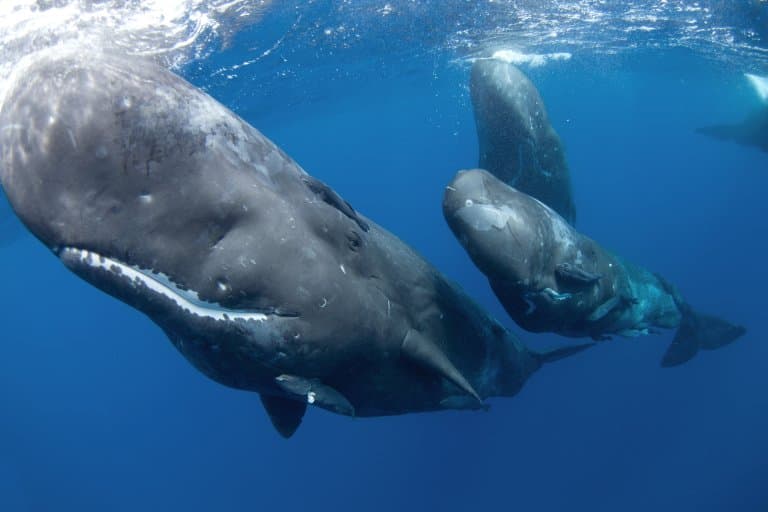 2. They are the largest of the toothed whales

Adult males can weigh up to 80 tonnes, which is the equivalent of 800 people.

On their lower jaw, sperm whales have between 36 to 50 teeth. Conical in shape, these teeth are perfect for puncturing and tearing apart prey.

On their upper jaw, they have vestigial teeth that remain embedded within the whale’s gums. Other toothed whales include oceanic dolphins, beaked whales, killer whales, and beluga whales.

3. There are legends about their battles with giant squid

As deep divers, sperm whale are limited to prey that can thrive at these remarkable depths.

They have often been found with scars, injuries, and “sucker marks” indicating some gruesome encounters with giant squid.

Giant squid can be the same size or bigger than sperm whales and will fight viciously with them. Adult whales can be seen with scars on their heads from the beaks of giant squid. 2

4. They are frequent breachers

Almost all whales have the ability to breach (breaking the surface and jumping almost completely out of the water); however, some do so more than others.

Sperm whales have been frequently observed breaching. It is suspected that whales engage in this behavior as a form of communicating.

5. They have exceptionally large lung capacities

Sperm whales can stay under water for up to 90 minutes at a time.

Their unique respiratory systems allow them to effectively store oxygen in their lungs.

6. Sperm whales are one of the deepest diving mammals on earth

The deepest dive completed by a sperm whale reached depths of approximately 3,000 metres—that is almost 3 kilometers below the surface!

Only the southern elephant seal and Cuvier’s beaked whale are thought to have dived deeper. 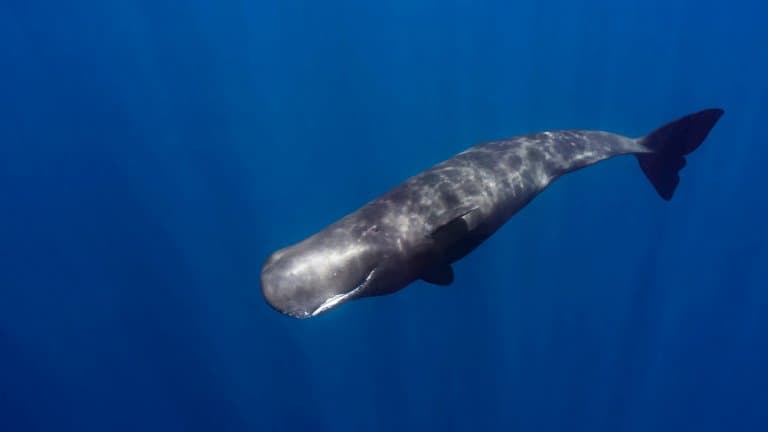 7. They are the loudest animals on the planet

Beneath water, sperm whales can produce echolocations and clicks measuring approximately 200 decibels. This far surpasses the volume required to burst a human’s eardrum.

Like dolphins, sperm whales use echolocation to navigate the oceans and detect other objects.

8. When they sleep, they float in a vertical position with their heads facing the surface

Over the course of a day, sperm whales only spend less than 10% of their time sleeping. To sleep, they will dive down and position themselves into a vertical orientation with their heads directed towards the water’s surface.

They take 15-minute naps as they gradually float back up. 3

9. Calves are enormous at birth

After a gestation period of over a year, females give birth to one calf which can be over 4 metres in length. In general, whales will reach sexual maturity between the ages of 7 to 13 years.

During this time, they will stay under the protection of their pods.

It follows Ishmael, a sailor in search of a giant sperm whale named Moby Dick so that he can get his revenge. 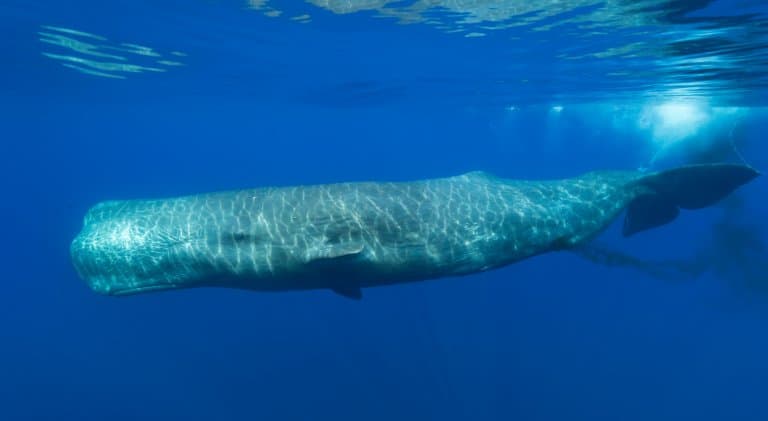 11. They are very adaptable and can live almost anywhere in the ocean

Among marine mammals, sperm whales have one of the widest distributions across the globe.

They have been found in waters from the Arctic all the way to the Antarctic.

12. A substance found in their intestines is used for medicinal purposes

Ambergris is a substance found in the intestines of sperm whales that is used for medicinal purposes, as well as a spice.

It has washed up on the coasts of China, Japan, and Africa. In the sun, it will harden up and give off a fragrance that has been said to be pleasing to the nose.

13. Mothers help to take care of calves that are not their own

Sperm whales form social groups called pods that are comprised of between 15 to 20 whales . After birthing, pods tend to stay in warm waters where females will, together, raise the group of calves.

Some mothers have even been observed nursing the young of other females. 4 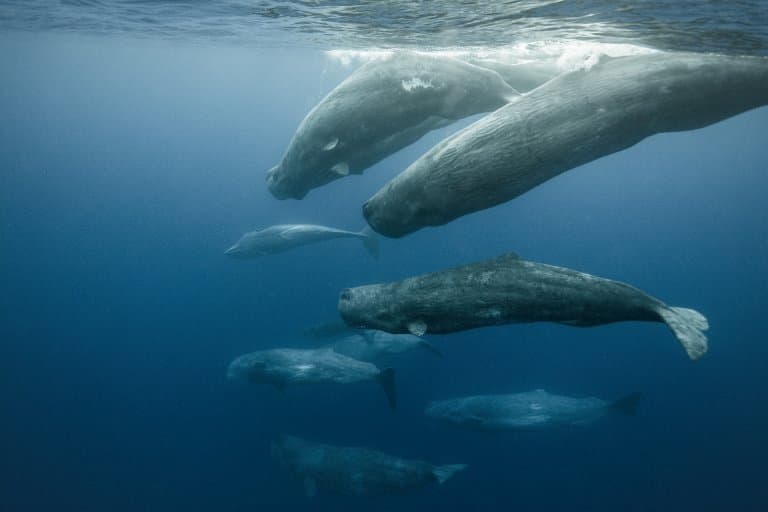 14. Males will wander off after mating and form their own social groups

Female sperm whales are responsible for the vast majority of offspring rearing.

Males will depart shortly after mating and form “bachelor pods” with other males. In these groups, they hunt and protect each other against predators.

15. Sperm whales were hunted to near extinction

Spermaceti and sperm oil from the blubber of whales was used in candles, soap, cosmetics, oils and other commerical products. This hunting led to near-extinction of sperm whales and other large whales, until bans on whale oil use were introduced in 1972.

Historically the worldwide population is thought to have been over 1m sperm whales before commerical whaling. While their population number is unknown now, it’s estimated to be in the hundreds of thousands.

16. They are a protected species almost worldwide from whaling

Both the Endangered Species Act and the Marine Mammal Protection Act protect sperm whales from being hunted or traded.

While they are protected from whaling, they are still classed as vulernable by the ICUN. Their biggest threats are entanglement in fishing nets and collisions with ships. 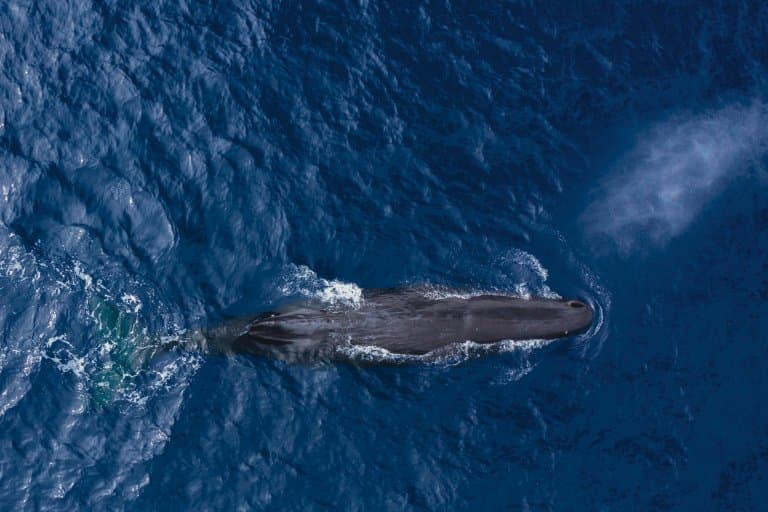