Most people know that around 65 or 66 million years ago, a big asteroid crashed into the Yucatan peninsula, wiping out around 75% of all animal species and ending the reign of the dinosaurs. Fewer people know that while this did represent a power shuffle in which mammals took over as the dominant class, dinosaurs weren’t entirely removed.

While some of the survivors evolved to be small, tree-dwelling songbirds, others maintained a Cretaceous defiance, carrying their high speed, large size and powerful talons with them through the epochs, to arrive, 80 million years later, at the present day just as fearsome and prehistoric as they were when the sky fell at the start of the Paleogene. 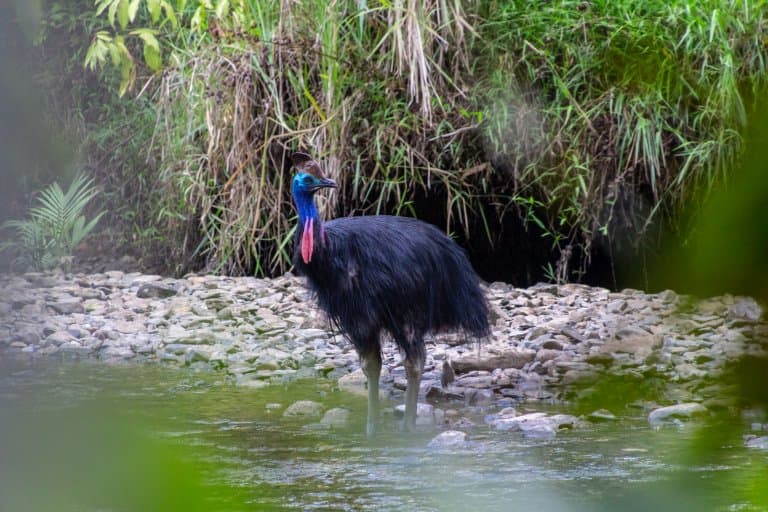 Cassowaries are large, powerful, and potentially dangerous animals who can run fast and jump high. They’re not afraid to follow you into water, either.

Thankfully, though, if you leave them alone, they tend to reciprocate; and leave them alone you should! As these are keystone species with powerful roles in unique ecosystems.

They also hold some of the secrets of ancient animals, including dinosaurs, and how they got their appendages. Let’s take a look.

1. They’re the world’s most dangerous bird

Attached to each foot of this dinosaur is a 12cm (4.7 inches) claw. This claw is attached to long, muscular legs, and being a flightless bird, the bodyweight and bone structure of a terrestrial animal.

Combining all this weight and musculature it can kick forward with a powerful, rasping motion, designed to tear into whatever it’s attacking.

Though it’s normally a pretty chilled-out and shy bird, it will attack when threatened, and it’ll follow through, too. There are confirmed cases of cassowaries killing people, as well as their pet dogs and cats. There are even cases of them attacking small horses, though tales of the fatality of these attacks are unconfirmed.

Many believe this to be the most dangerous bird in the world, simply due to its ability to strike like a velociraptor. They can also run about as fast as a police dog, jump two meters into the air, and can weigh more than the average European.

Most attacks on humans have either been cases of the cassowary defending itself or its nest or cases where people had habituated the animal by feeding it and giving it a false sense of entitlement. 1
2

Oh yeah, and they can swim, too. Cassowaries are the perfect all-terrain vehicle, comfortable in the water, and fast going uphill. There’s really not much you could do to avoid one if you got on its bad side.

Their feathers are not waterproof like those of many birds, instead, they’re more like fur, and cassowaries dry themselves much like dogs do, by shaking the water all over your jeans after they get out of the river.

Their head and neck are blue, and incredibly under their black feathers, the entire body of the bird is also blue.

Their feathers which cover their blue skin are not regular feathers, and almost feel like horse hair.

‘Cassowary’ originates from the two Papuan words ‘kasu’ meaning ‘horned’, referring to their casque on their head –  and ‘wari’ (meaning ‘head’).

Their horn is made of keratin, the same material as human nails. 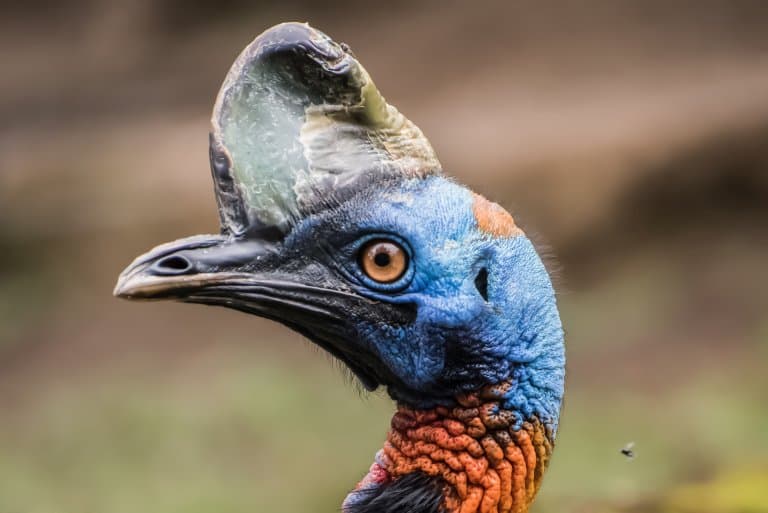 5. Their poop is important

Cassowaries can eat food that not many animals can eat. They eat mostly fruit, and some of these fruits are toxic to other animals. They play a significant role in seed dispersal throughout the forest, as the seeds of the fruit they eat pass through undamaged.

In fact, it’s thought that their digestive system even helps improve the chances of germination in some seeds.

This role makes them a keystone species in their habitat, with multiple other species relying on their existence to survive.

One team found over 78 species of seed in the droppings of cassowaries, and another showed that passing seeds through their gut boosted germination rates of some seeds from 4% to 92%, demonstrating just how many plants might be using their services. 3

6. The males sit on the eggs

When all this fruit is kicking about and there’s plenty to eat, cassowaries begin to tolerate one another a little more. Females will allow the male to perform his mating dance, and he’ll circle and call out to her with a series of guttural booms.

The male will stick around after mating, and once the female lays, about two weeks later, she’ll leave him with three to five, vivid, green eggs to look after. While he’s busy with that, she can find another mate and go for a second round before the season ends.

The male will sit on the eggs for about two months and then look after the hatchlings for up to another year and a half. Male only parenting occurs in only 1% of bird species.

Around this time, they’ll be big and scary enough to take care of themselves, never having known the warmth of their mothers’ love.

7. Their eggs are green

The green colour of southern cassowary eggs comes from ‘biliverdin’, a common pigment found in bird eggshells and also responsible for the color of bruises.

This color is perfect to act as camouflage away from predators that try to eat their eggs.

8. Their feathers have two shafts

We know that feathers evolved before flight, but in cassowaries, it’s thought that their lineage once evolved to fly and then lost that ability, rather than following an unbroken lineage of flightless birds.

Flight puts certain restrictions on the design of feathers since they need to have particular qualities that make them aerodynamic.

Losing these restrictions then opens up a whole new set of options for the evolution of feathers, and by studying a combination of derived and novel traits, palaeontologists are starting to draw conclusions about the different ways in which colour and other features of feathers might have presented in prehistoric dinosaurs, and where they originated in modern birds. 4

9. They have a mysterious casque

One of the key features of a Southern cassowary is that big old horn on its head. This horn, known as a casque, is a bit of a mystery.

What we know about animal headgear is that it can usually be considered either defensive, decorative, for producing sound or for thermal regulation. Sometimes it’s a mix of two or more roles.

The complex vascularity of the cassowary suggests either a display or thermoregulation role, as flushing the casque with blood can be a way of transferring heat away from the animal and may change its colour.

This hypothesis was tested with thermal imaging cameras and found to be supported. It seems that the casque also heats up at the back first, and then the front, suggesting two separate vascular systems are in play. The ins and outs of this discovery are still to be discovered, but it’s a step closer to understanding the fossilised ancestors of these birds too. 5 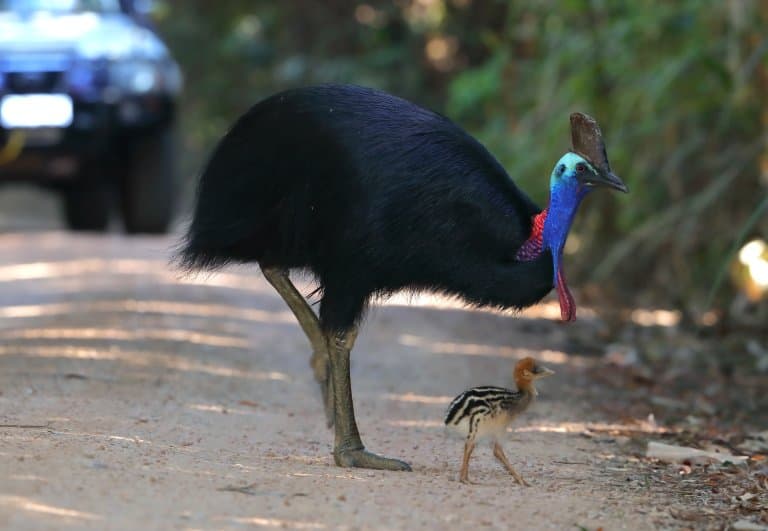 10. They are the second largest bird species on the planet

They are the largest species of cassowary and are the third heaviest bird in the world, after the Somali ostrich and the common ostrich.

Female cassowaries are dominant and larger than males.

11. They are endangered in Australia

While the IUCN has evaluated and classified the southern cassowary as ‘least concern’, the Australian population has been listed as endangered by the Australian government.

There are an estimated 1,500 – 2,500 birds in Australia, and the main threats are habitat loss due to logging, feral animals, hunting and roads.

In particular roads and becoming roadkill and feral animals eating their eggs are the biggest dangers to the southern cassowary.