The ostrich is known for its towering height, small head, and lightning speed. Their muscular thighs and ability to sprint at almost 70 km/hour make them the world’s fastest animal on two legs.

Ostrich belong to a family of fightless birds, and are part of the ratite group that includes kiwis, emus, and rheas. They are found natively in the wild in Africa only. 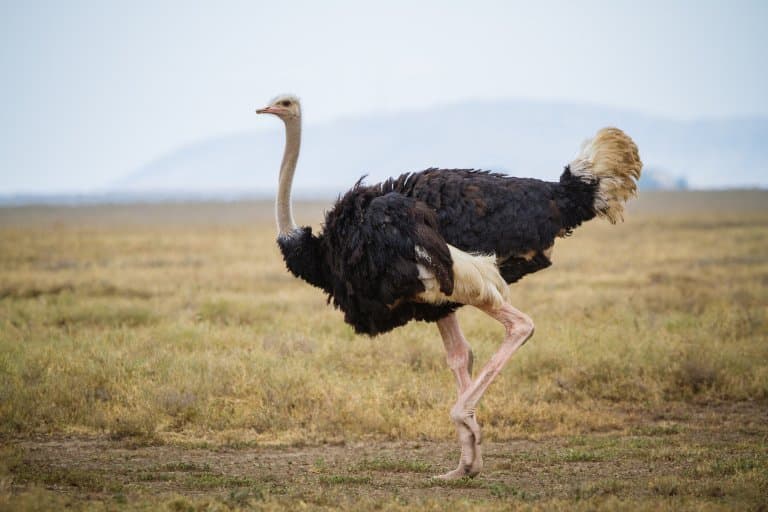 Their are 4 additional subspecies of ostrich, with varying skin color from grey, to pinkish.

Ostriches display sexual dimorphism, so males and females look quite different. Males have the characteristic black and white feathers ostriches are usually recognized by, while females are generally more brown and gray in color. On their petite heads, ostriches have huge eyes, that give them exceptional eyesight, and ears hidden by tiny feathers.

Ostrich diet on grass, shrubs, fruit and flowers, although they will also eat insects, and small reptiles. They eat sand and pebbles, to help grind up their food inside their gizzard.

While they are currently classified by the IUCN as a species of least concern, wild ostrich numbers are dropping. This is largely due to habitat loss and hunting practices.

In short bursts, which makes them the fastest animal on two legs. They can also run for up to 2km on a flat surface at speeds of around 55kph (34mph).

Their long legs allow them to cover up to 15-feet in a single stride! 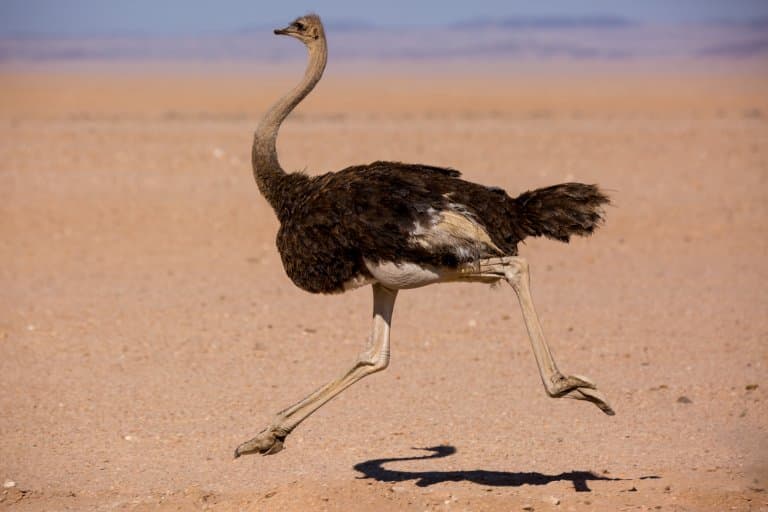 2. They are the worlds largest bird

3. Ostrich have only two toes

Most birds have four toes, and this dinosaur-like adaptation appears to aid the ostrich running at great speed away from predators. One toe has a very sharp claw. 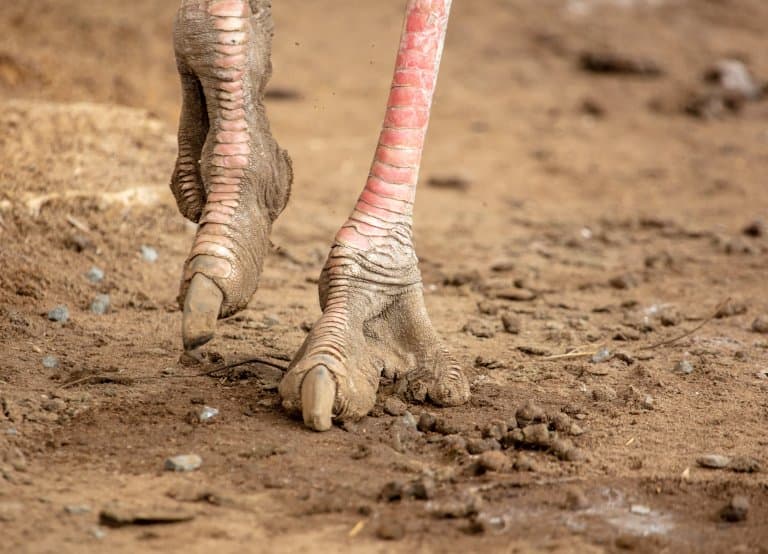 4. They can’t fly due to the structure of their breastbones

Flying birds have curved sternums that allow them to take flight. Ostriches are heavy, with small wings and and their sternums are flat, which means they stay grounded.

5. They make the largest eggs in the world

They can weigh up to 3 pounds and measure half a foot long. Historically, only dinosaurs were capable of producing larger eggs. 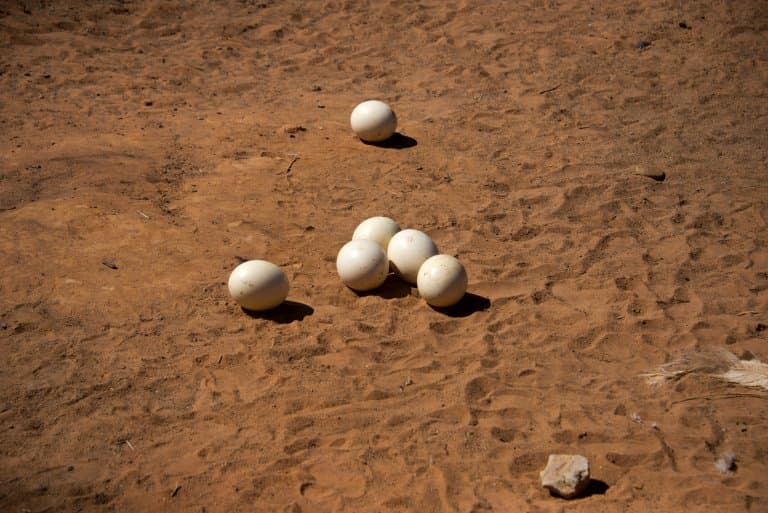 6. Their kick is strong enough to kill a lion

In addition to helping them traverse long stretches of savannah, ostriches use their legs as deadly weapons. Each foot is armed with two toes that act like claws.

Animals often end up running away from the large bird. 1

Often found in units of 10-12, ostriches form groups called herds. They can live in groups of up to 100 nomadic birds.

Like lions, males will compete for control and dominance over their own herd. 2

In an intricate courtship display, males will dance and flap their wings to try and attract a female he is interested in.

They have been observed jumping, sashaying, and stepping from side to side.

9. They are resilient to environmental changes

The weather and temperature in savannas can vary drastically between the night and the day. Ostriches can regulate their temperatures based on how much of their legs are covered.

In cooler weather, they will conceal more of their legs to trap heat. 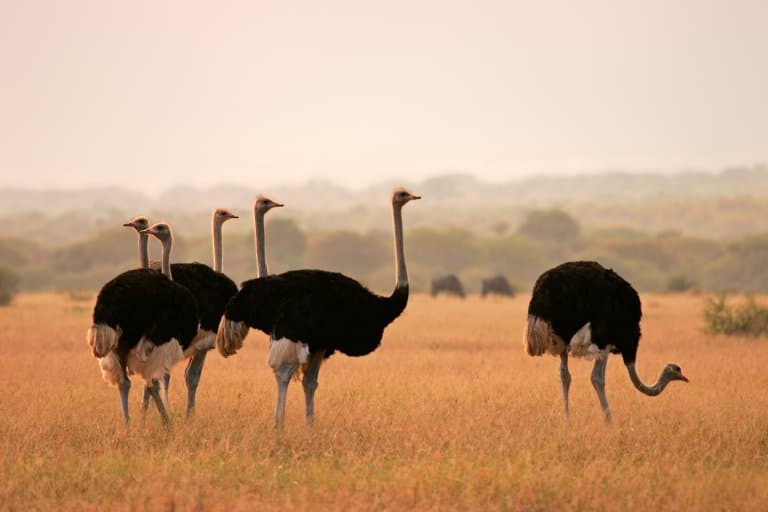 10. They have long thick eyelashes

While beautiful to look at, they do have a purpose – they help protect their eyes from sand and dust storms in the semi-arid environment they live in.

Each herd is ruled by a dominant male and female. Main females lay about a dozen eggs while other females lay two to six eggs.

12. Chicks grow at an alarming rate and become independent quickly

Eggs incubate for a month and a half. After hatching, chicks grow at a rate of a foot per month and leave the nest in just a few days.

By six months, they are adult-size and have mature feathers on display. 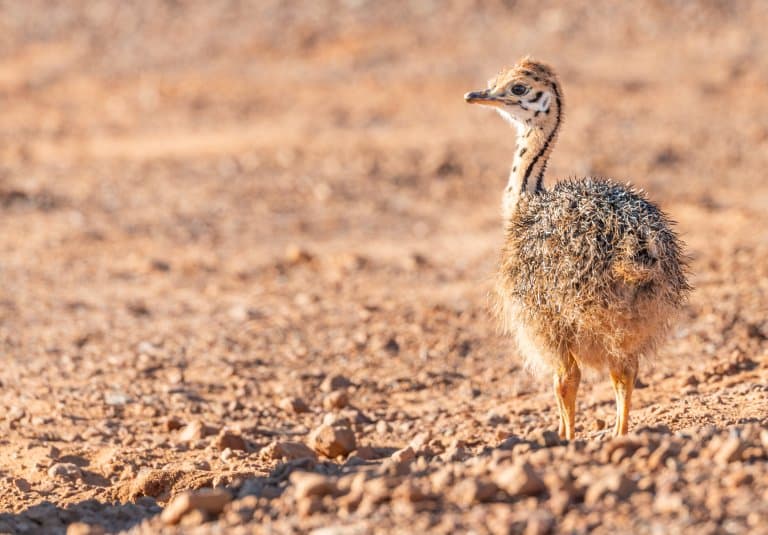 While grow rapidly and adult ostrich are avoided by many predators due to their speed and and dangerous kicks, the very young are preyed upon heavily by big cats, wild dogs and other animals.

Up to 90% of infant deaths can be down to predatation in the wild.

14. Unlike other birds, ostriches are quite promiscuous

To diversify their DNA and maximize reproductive success, ostriches tend to seek multiple sexual partners, even within a single breeding season.

Both males and females will engage in interactions with multiple partners.

15. Females change their appearance to indicate their readiness to mate

Females on the search for an appropriate male change color. Their feathers take on a silvery tone and shiny sheen when they are ready to mate. 3

16. They are bred in captivity all over the world

Across the globe, ostriches are bred and farmed for their meat, skin, feathers, and eggs. Ostrich leather is considered a luxury material that is often used to make purses. 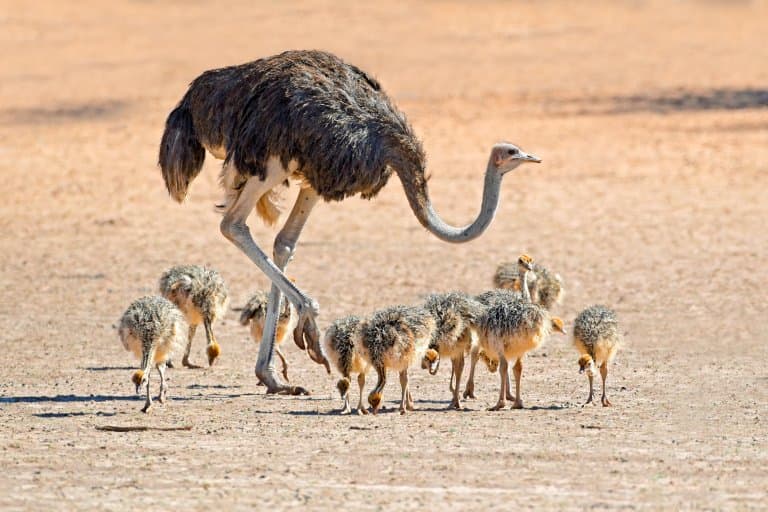 Ostriches can very effectively extract water from their diet. They will drink from water sources when presented with them, but their hydration demands can be met by foods (predominantly plants) alone.

18. They do not bury their heads in the sand

There is a well-known myth describing ostriches hiding their heads in the desert sand.

In reality, ostriches lower their heads to the ground to better blend in with their surroundings and occassionally stick their head into their nests to rotate their eggs so they are evenly heated. 4

19. They are used for racing

The practice is fairly common place in Africa, where people will race each other on the back of an ostrich, like a horse!

They even have saddles and reins, but are much harder to control than a horse.