Out in the open ocean, there’s a sleek and powerful hunter that uses its speed, agility and ferocity to slash and stab at its prey with an elongated jaw.

But this is no ordinary swordfish or marlin; on its back is a glorious sail, used to stabilise itself when moving at speed, as well as to communicate with and dazzle its neighbours. This is the sailfish, and it’s reportedly the fastest animal in the ocean, but is it truly worthy of this title? 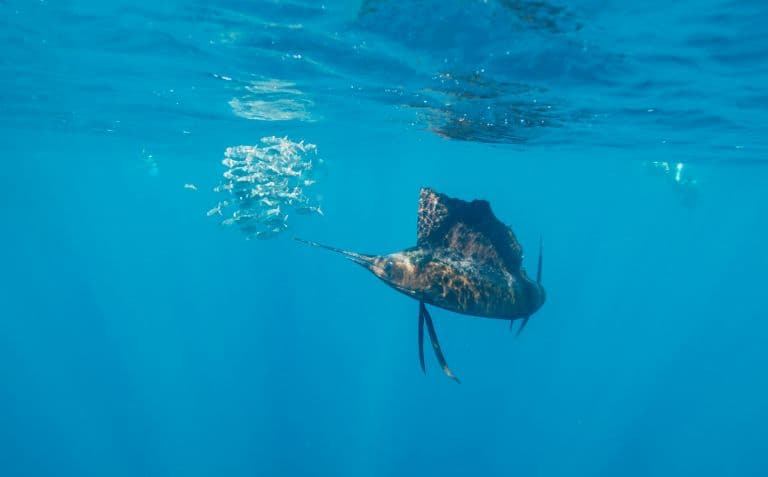 The sailfish is a beautiful, fast-moving and muscular predator that’s always on the move. It can accelerate at tremendous rates, hunts in large groups and covers incredible distances.

They habitat temperate waters of the Pacific, Indian and Atlantic oceans near coastal regions and reefs, where its main food source live. They diet on smaller fish, crustaceans and squid. In particular they like to feed on sardines and anchovies.

Sailfish are a billfish, which are a group of fish with pointed bills, and includes the swordfish and the marlin. Sailfish have a sword-like upper jaw twice as long as its similarly pointed lower jaw.

The sailfish is a species from the same family as the marlin, which it can be mistaken for to the untrained observer. Sailfish are blue and gray in colour and have a large dorsal fin which stretches across their back, known as a sail. The spectacular fin is where they get their name – as it’s like a boats sail. The marlin dorsal fin in comparison is high at the front and dips downward to the back.

While two sailfish subspecies have been recognised (the Atlantic sailfish and the Indo-Pacific sailfish), there’s been very little difference found between them, and most authorities now class them both as a single species.

Sadly, they are popular targets for sport fishermen but can sometimes give almost as good as they get! Fortunately their populations are stable and least concern, and there is no current protections placed upon them around the world.

1. They’re apparently the fastest animal in the ocean

Early estimates of the speed of sailfish from the ‘40s suggested it could swim at bursts of up to 67mph, making it significantly faster than pretty much everything in the ocean.

From this, somewhat less-diligent wildlife bloggers have been spotted making claims of upwards of 70mph for the top speed of these fish. Some even convert that to km/h and forget to change the unit, so the internet is riddled with exaggerated and inaccurate claims about just how fast this fish can swim.

More recent assessments, however, have offered much more conservative estimates of around 15.7mph, or 25.2 km/h, with a physical limit on top speed, suggested to be up to 35km/h. This is substantially lower than the previous estimates, but is still incredibly fast for a fish, and comes from the most accurate measurements available so far.

What stands out even more is that the same researchers discovered a potential acceleration of the sailfish’s bill of up to 131.6 m s−2 – an incredible feat and a brilliant way to take prey by surprise.

So, these fish are fast. But perhaps not quite as fast as reported. However, they are acceleration machines, and this alone makes them one of the top predators in the ocean. 1 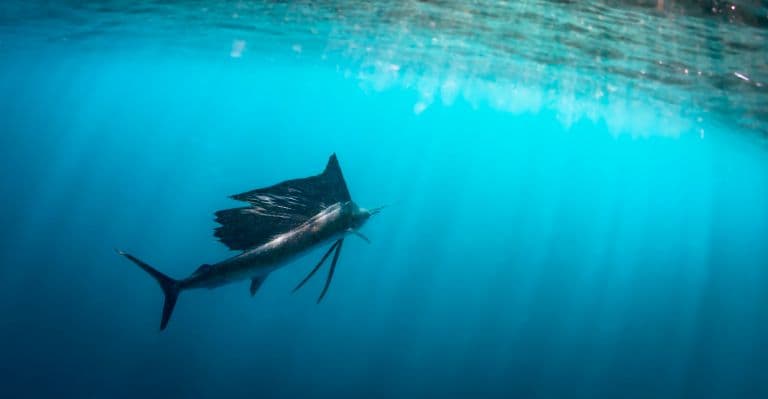 2. Though, they are probably slower than Mako sharks

There are certain physical properties of scales that create an expected upper bound to how fast they can move through the water. One of the reasons researchers expect a sailfin can’t swim much faster than the 35km/h recorded is due to these physical limitations.

Sailfin fish, like all of the class of bony fishes, have very different scales to sharks, and the mako, a very fast, open-water shark has scales that are basically a very strange form of teeth called dermal denticles.

These denticles aren’t fully understood, but it’s thought that their arrangement significantly boosts the hydrodynamic properties of sharks, reducing what’s called ‘cavitation’ and thus it stands to reason that a shark with the same muscular properties as a bony fish could swim faster.

The internet is riddled with claims about the mako’s speed, none of which are well-cited, but if even the lower estimates are true, this would suggest that the sailfish has lost its title as the fastest fish in the ocean. 2

Within the first year, sailfish have already reached up to 5’ (1.5m). Eggs hatch within 36h of being laid, making this fish one that really does put all its character points on acceleration. 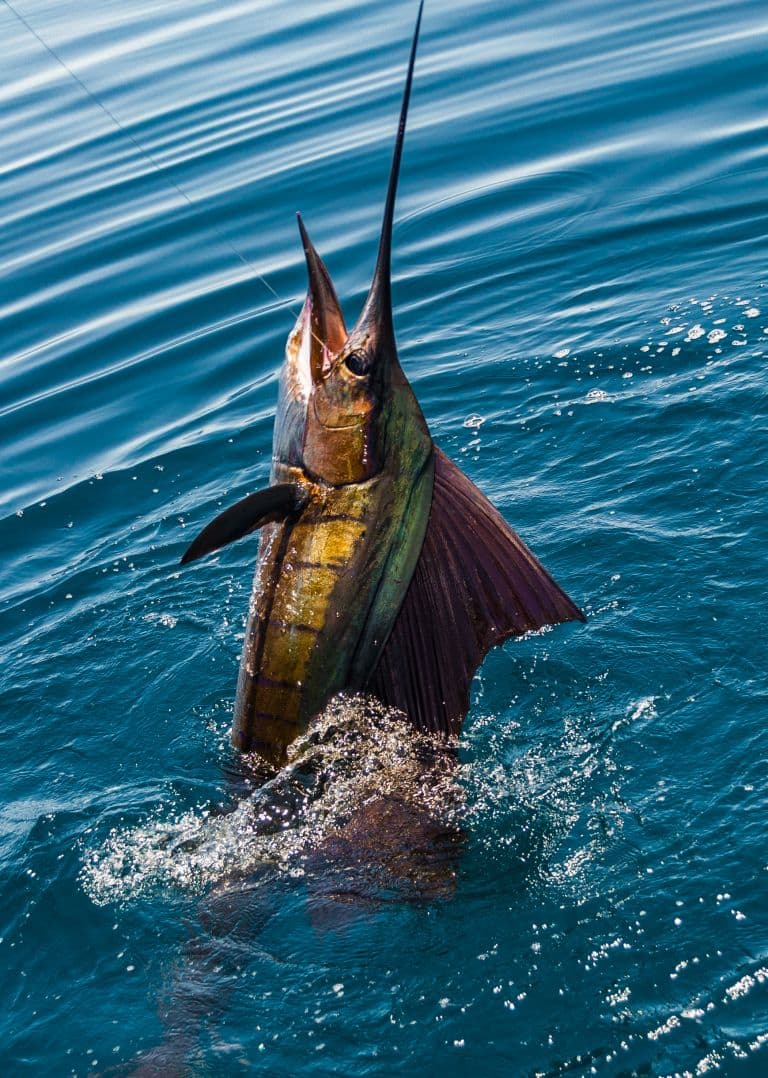 4. They use their sail for balance

Among other uses, the sail on the back of this fish can be used to stabilise its long bill.

This is perhaps a way of the sailfish approaching prey items without telegraphing that it’s heading over to spear them.

5. Their sail can be a taller than the length of their bodies

They don’t always swim with it fully open though, they sometimes keep it folded to help swim faster!

6. They hunt in packs

Over 100 sailfish can gang up on schools of baitfish during epic herding and hunting events. During these hunts, the sail-like dorsal fins are used to herd the fish into a ball. Individual hunters will change colour to indicate when they’re going in for a kill, helping to prevent unwanted injuries between conspecifics.

The benefit of having so many sailfish on the same ball comes from not only being able to control the direction and density of the shoal, but that one sailfin can benefit from a failed kill of another, picking off injured fish from attacks that weren’t wholly successful.

7. They change color based upon their mood and behaviour

Sailfish broadcast their moods through changes in skin color, and not just when they are hunting food where they have been witnessed darkening up as they prepare to attack prey.

They can also change to a copper/bronze, neon blue and purplish tints on their skin when they’re tired or excited – which is controlled by their nervous system.

Exactly why they change color is still debated by the experts, but most agree it’s a physiological change, similar to how humans can go pink when embarrassed.

Because sailfish need to eat every day, they have to keep moving. These epipelagic fish occupy the upper layer of the open ocean and travel vast distances to find food.

Their rigid and muscular frame allows them to conserve and transfer as much energy as possible for long journeys, getting every ounce of thrust out of their powerful tails.

This is a tremendous amount of caviar, most of which will be eaten by plankton feeders.

Those who do hatch will still have to fight through their lifecycle to reach maturity, but these are species of least concern, so it looks like enough of them are getting through!

10. Sailfish can fight back

Because of their immense power and elegance, there’s a certain subsection of humanity that strives to hunt these fish for sport. When caught on a line, the sailfish instinctively leaps out of the water, commonly landing itself on fishing boats, and sometimes impaling or slashing the fisherman or crew in the process.

Marlin, Sailfish and Swordfish have all been known to do this, and unfortunately, if they’re not soon killed after landing in the boat, they often die when returned to the water anyway, when the exhaustion from the event. Even when sampled for marine biology purposes, the rate of post-release mortality of fish like this is often much higher than reported. 3 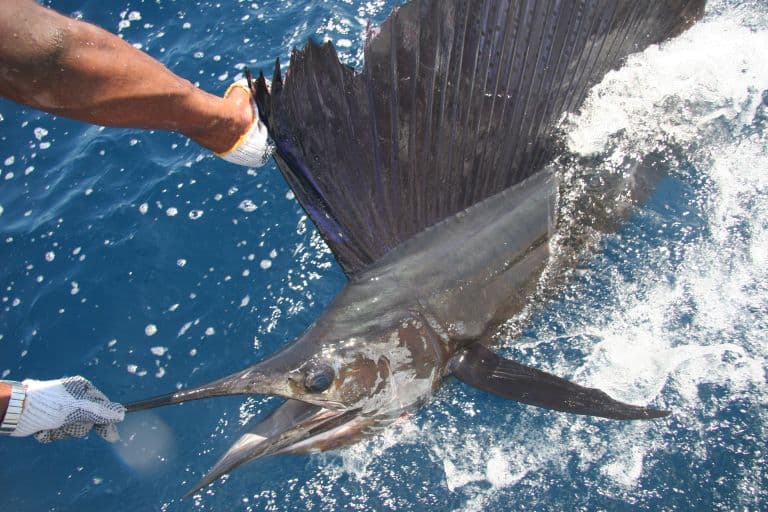