The iconic little bandit mask and human-like fingers give this animal its name and notoriety.

This is a troublemaker in urban environments, but a smart and agile survivor who can thrive under a wide range of conditions.

This is the raccoon, a generalist omnivore from the Americas, with an ability to fit in almost everywhere. 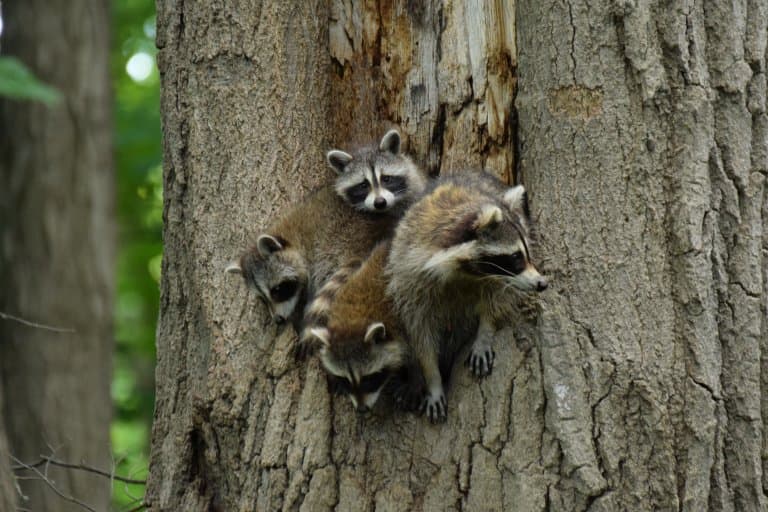 Raccoons are the largest of the procyonid family, which includes ringtails, cacomistles, coatis, kinkajous and other small animals with long tails. They can reach up to 70cms in length, and weigh as much as 26kg.

They originally inhabited forests, but due to their impressive adaptability and intelligence, they now live in a variety of areas including coastal, mountains or even built-up urban.

Raccoons are nocturnal and omnivorous, dieting on insects, worms, fruit and nuts. They will on occassion eat larger animals, such as birds, or reptiles.

Raccoons are cute, smart and cheeky. It’s no wonder so many people want to keep them as pets. However, these are not an animal that does well in captivity; growing to be aggressive and uncontrollable as they mature.

Once they survive their first few winters, these animals are almost unstoppable; able to scale tall objects, cross water and navigate in low light. They also talk a lot!

Unfortunately this ability to fit in has caused some trouble and invasive populations are now being necessarily eradicated in many parts of the world.

1. Their bandit mask may reduce glare and help with night vision

The black contrasts with the white fur around the rest of a raccoons face, which help them see clearly. This is similar to how some athletes wear black stickers under their eyes to absorb light and reduce glare than could obstruct vision.

Although that’s just one theory, another is that the subtle differences help them identify each other.

One thing is for sure, their famous mask play into their reptuation for mischief! 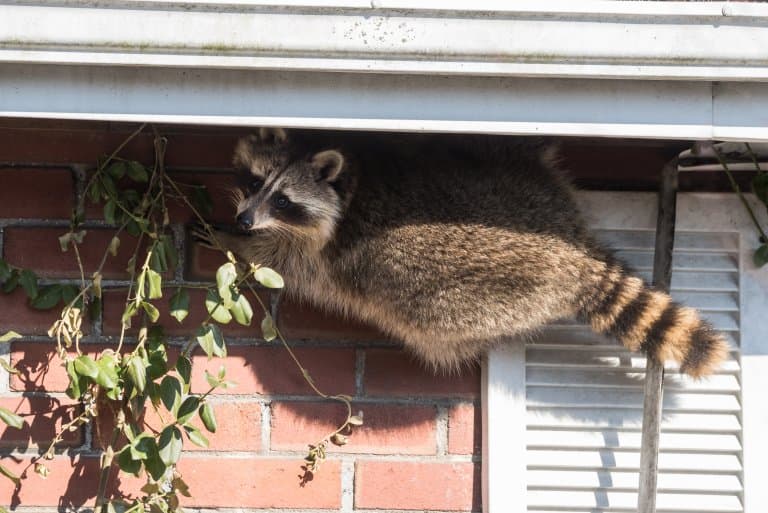 2. Many raccoon babies starve in the winter

Unlike many mammals in their habitats, raccoons don’t hibernate. They instead spend extended periods of time in their dens during cold weather.

Young raccoons, with very little body fat, are very vulnerable during these periods, and many don’t make it through the winter.

Raccoons have cool hands (more on that later) and their strength and agility make them very good at getting up trees. Or houses, or barns, or the walls of a Toronto office building. 1

Despite being land animals, raccoons are deft swimmers.

They’re even competent hunters in the water, chasing down amphibians and even fish. 2 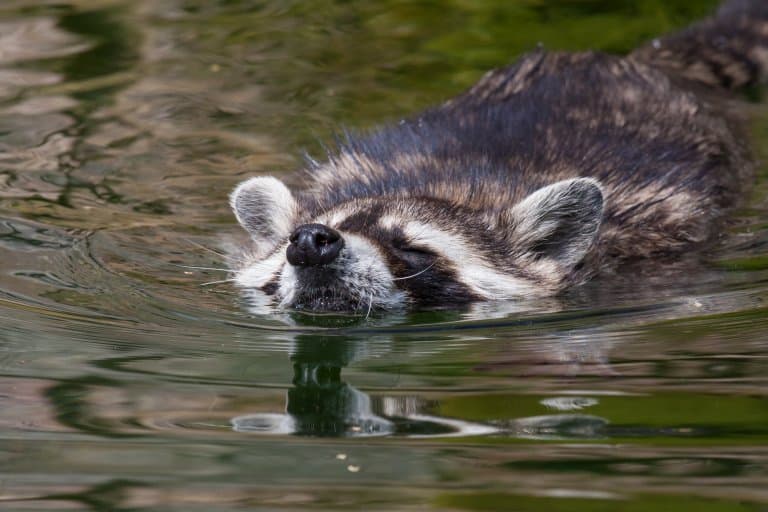 5. Raccoons are solitary, but tolerant

As raccoons age, they tend to drift off from their mothers, but there are some accounts of long-term bonding that remains.

When there’s plenty of food available, they will happily share, and generally seem to have little trouble around one another outside of some territorial behaviours.

6. Raccoons have a wide range of vocalisations

For a solitary animal, they’re remarkably communicative. Raccoon noises include chittering, purring, barks, snorts and snarls, all able to get the message across with clarity.

The full range of calls listed in one research paper was as follows:

It wasn’t mentioned in the paper, but it’s assumed that each one was expressed very cutely.

They don’t just poo anywhere, raccoons pick latrine sites and stick with a few of them.

Unfortunately, often times these latrines are the roofs, decks and unsealed attics of local human populations. 3 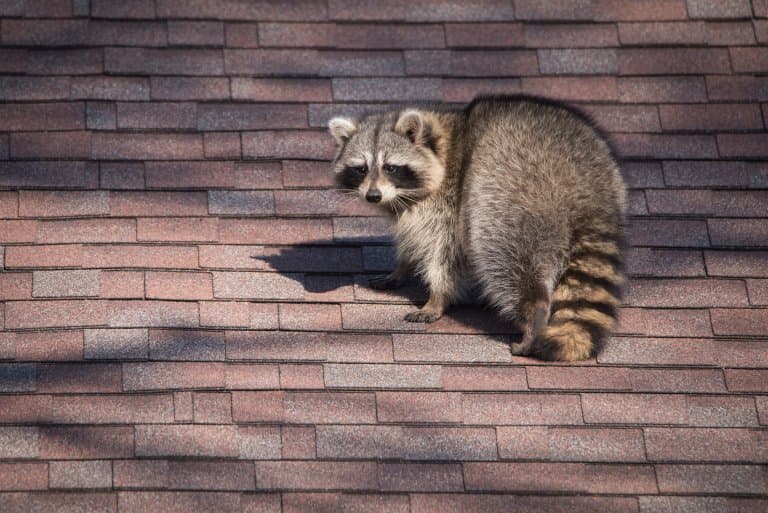 8. There’s a crab eater and a pygmy version

While the most common and well-known species of raccoon is what most people refer to as “the raccoon” (also known as the ‘common raccoon’) there are in fact two other species. Procyon lotor is the best-known, but there is also P. cancrivorus and P. pygmaeus whose names translate to “crab eater” and “pygmy” respectively.

If their names weren’t already clues enough, crab-eater raccoons hunt for crabs and other crustaceans in the marshy and jungle areas of South America, and the pygmy raccoon is a smaller island version of the other two, endemic to Cozumel Island in the Mexican Caribbean.

With raccoons, their size is inversely proportional to their cuteness, so it’s particularly tragic that the smallest of all the Procyons is critically endangered.

The destruction of their mangrove habitat by human intervention is mostly responsible for their decline, but the introduction of house cats has further decimated their populations.

These dangerous effects have also affected their close cousin the Dwarf Cyoti, a member of the same family. 4 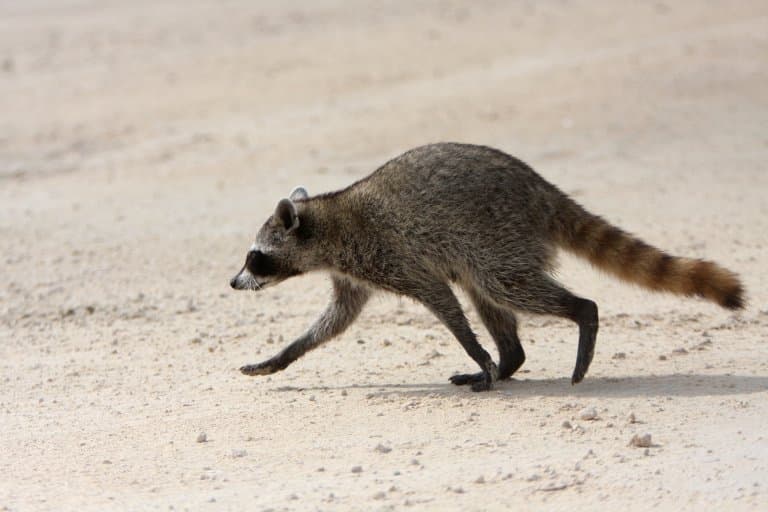 While baby racoons are sweet and adorable, when kept among humans past sexual maturity they almost always become hard to handle.

An adult raccoon is a much more aggressive, territorial and troublesome animal, so they don’t make good pets.

In fact, in some places, escaped pet raccoons have led to their rise as an invasive species, and is consequently responsible for the need to trap and kill countless individuals in eradication programs.

10. They’re named after their hands

Both the Quebeqi and the Spanish-speaking colonists who named raccoons independently referred to the hands of the animal. The word aroughcoune roughly translates to “the one that scratches with his hands”, and mapachtli in Spanish refers to “the animal with the hands”.

This is because the hands of a raccoon are distinctly human-like.

‘Lotor’ from their scientific name ‘Procyon lotor’  is Latin for ‘washer’.

This comes from their behaviour of dabbling for food underwater along shore-lines, where they pick up food, and appear to examine it and remove unwanted parts.

This gives them the appearance of ‘washing their food’.

The success of most mammals in adapting to new environments is commonly a by-product of a small set of useful adaptations: aggression, language, fingers, intelligence and an omnivorous diet.

Raccoons, like people, have most of these things. Animals who can eat anything, frighten anything, communicate clearly, and manipulate the world with dexterous appendages tend to do quite well in almost any setting.

Raccoons are a great example of this, which is why they’re currently taking over the world. 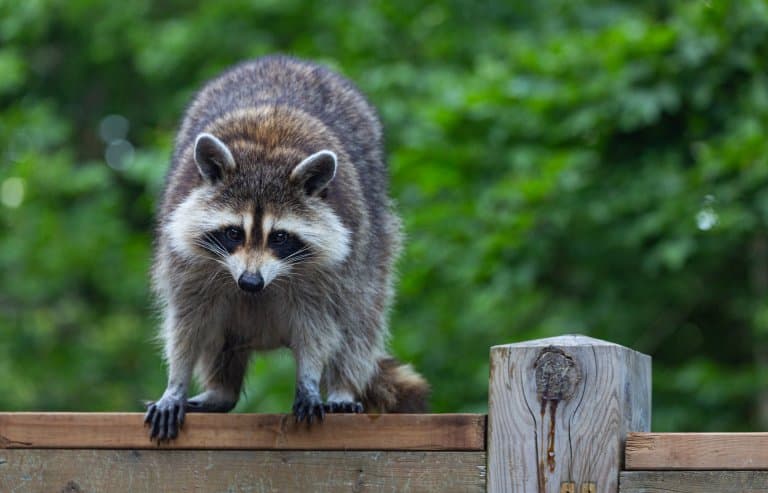 At least, some are. In Europe, there has been a recent boom in raccoon populations, and they’re not at all welcome. Unfortunately, as cute as they are, they eat pretty much everything, and present a legitimate threat to various small vertebrates and plant species wherever they set up shop.

Sadly, there are now EU-mandated eradication programs in place to get rid of them, which is a necessary evil, and one which conservationists really don’t like. 5