Coatis look like a strange cross between a racoon, lemur and monkey, with long tails that they hold aloft while moving.

These adaptations have gained them undisputed internet fame in recent years, because when footage of them running is played in reverse they look just like little dinosaurs.

Native to South and Central America and the southern USA, coatis are highly mobile omnivores that are able to take advantage of everything their habitat has to offer. 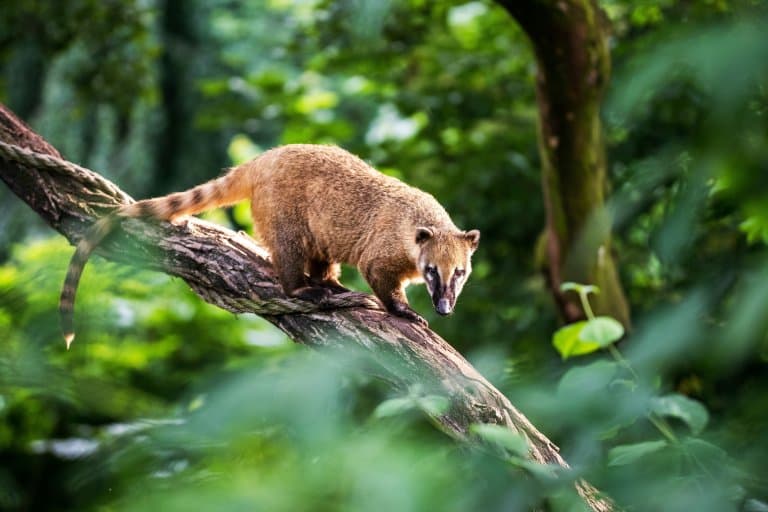 Coatis are sometimes reffered to as coatimundis, or occassionally even ‘brazilian aardvark’ on the internet. Coati are of course not aardvark, so this is misleading.

There are four species of coati, separated into two genera. They belong to the family Procyonidae, a diverse group of mammals placed within the order Carnivora.

Procyonids are only found in the Americas, and include the world-famous raccoon as well as lesser known kinkajous, olingos, olinguitos, ringtails and cacomistles. They are all generalist omnivores, well adapted for climbing, and apart from the coatis they tend to be largely solitary animals.

Coatis live in a variety of areas and adapt well to the climate, from hot and arid areas like rainforests as well as cold mountain ranges, and grasslands.

They are social animals that travel in groups called ‘bands’, containing females and younger males before they reach maturity at around 2 years old and live alone, only re-joining the group to mate.

Coati will eat leaves, plants, fruit and animals such as lizards, rodents, small birds and more. They’ll use their excellent sense of smell and paws to find food.

1. Their name is derived from their nose

The name coatimundi is thought to come from Tupian language which is indigenous in South America.

The word ‘kua’ti’ is a mixture of ‘cua’ which translates to ‘belt’ and ‘tim’, which means ‘nose’, which references the way coati sleep with their nose tucked into their belly. 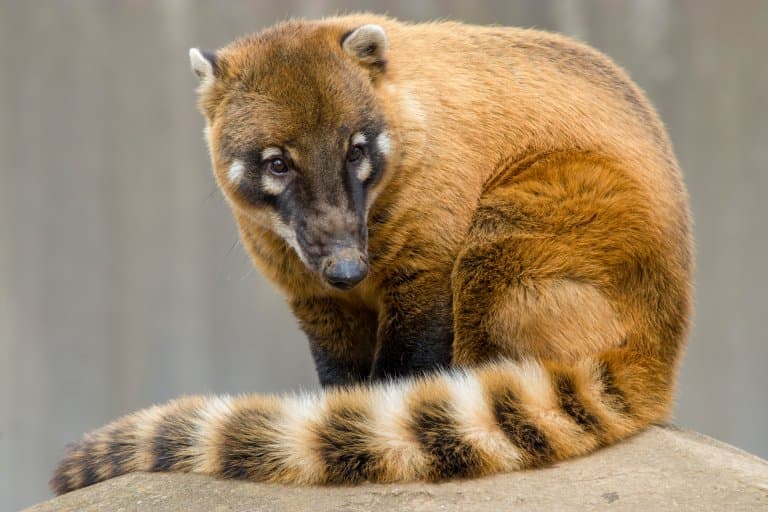 Equipped with powerful claws, swivelling ankles and a long tail for balance, coatis are adept climbers.

They are equally at home searching for food on the ground, in the treetops or on cliff faces, allowing them to access a huge variety of resources throughout the year. They are also able to survive high altitutes of over 2,500 metres (8k feet). 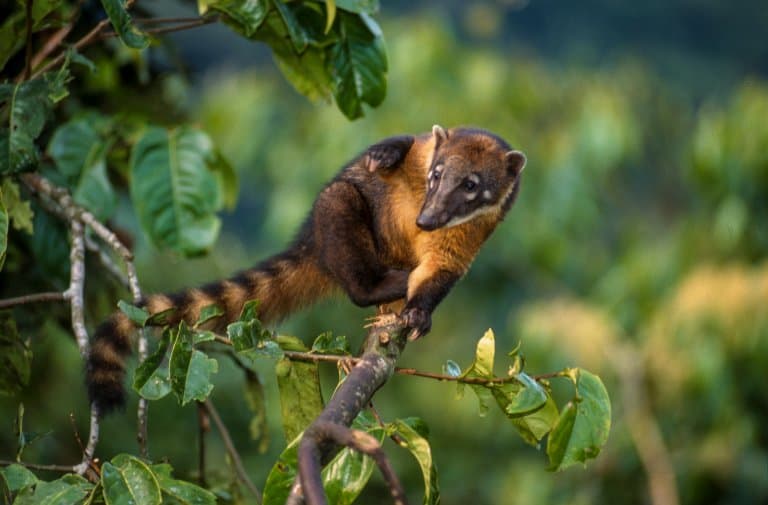 3. There’s nowhere to hide from a hungry coati

Coatis have an excellent sense of smell, and have highly flexible, elongated noses that allow them to locate prey hidden well out of sight.

Their strong forelimbs allow them to dig into crocodile nests, rip apart decaying logs and overturn large stones in search of food.

4. They can stand bipedally

While they walk quadrupedally, they often stand on their two hind legs for short periods, this helps them reach food, or get a better look at something (similar to a meerkat). 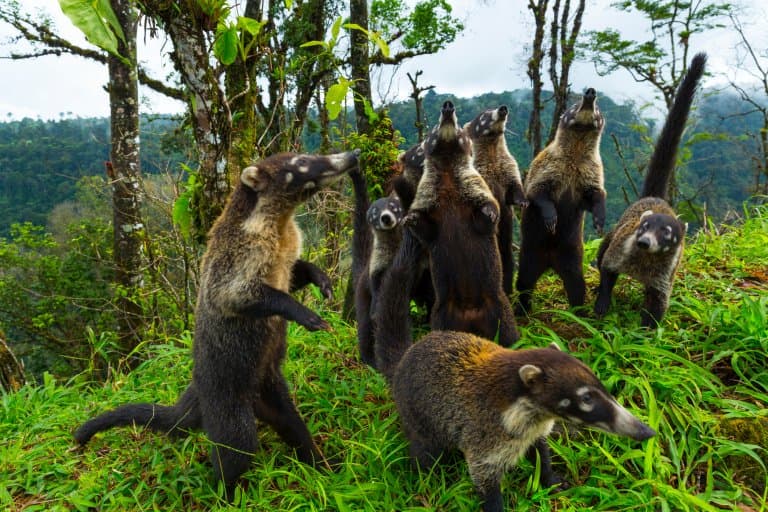 Like many of their close cousins within Procyonidae, coatis have evolved the brainpower to solve complex problems and remember sequences of actions in order to obtain food.

Intelligence is a common trait found among generalist species, allowing them to take swift advantage of novel feeding opportunities.

6. Their adaptations allow them to survive in some surprising places

Armed with their omnivorous palate, quick wits, sensitive noses and impressive mobility, coatis are able to thrive in a wide variety of contrasting habitats.

A small population of ring-tailed coatis has even been discovered in Cumbria, UK; it is thought that this group was founded by escapees from the exotic pet trade. 1 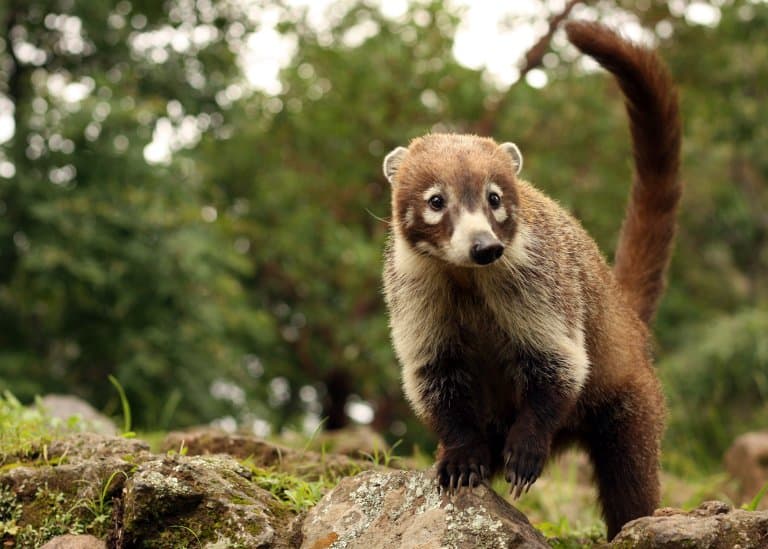 7. They have complex social structures

They are able to ‘keep score’ on other coatis with which they have had positive or negative interactions, and come to the aid of their friends if they find themselves in aggressive confrontations with other group members. 2

Once they have reached maturity, male coatis leave their group and adopt a largely solitary lifestyle.

Much larger than females and equipped with impressive canines for fighting with other males, they only join large bands for a few weeks each year, during the breeding season.

9. Coatis rely on each other to avoid predators

Each coati within a band keeps its eye out for potential predators, and uses alarm calls to alert the entire group to danger.

If a predator is spotted, they will rally together to drive away their attacker.

They also habitually forage with juveniles at the centre of the group for safety, and larger group sizes have been found to result in significantly lower mortality for both adults and juveniles.

10. They give birth in trees

They are excellent climbers, and female coati will build a tree nest to give birth.

They have between 2-7 babies, and they will stay there until they are old enough to climb down from the tree between 6-10 weeks old.

There is a degree of plasticity to their social structure, with large groups occasionally diverging and small groups joining together; it is thought that this helps to protect populations against inbreeding.

White-faced capuchin monkeys have been frequently observed raiding the nests of coatis to prey on their young.

Predation of larger vertebrates by chimpanzees and baboons is well documented, but it is much rarer among small-bodied primates. 3 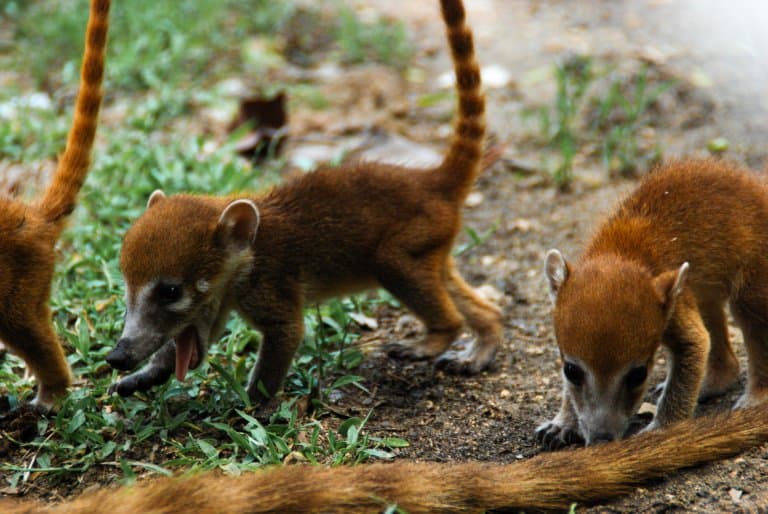 13. Coatis are threatened by hunting and habitat loss

Like many tropical mammal species, hunting of coatis for food is largely unregulated.

The destruction of their habitat compounds this issue further, because it is much easier for people to find them in smaller fragments of rainforest.

14. They are essential to the health of their habitats

Coatis have been found to ingest and transport the seeds of 49 different plant species over large distances.

Healthy populations of seed dispersers play an important role in maintaining the regenerative ability of their habitats, so monitoring and protecting coatis may well be a vital step in ensuring the longevity of the rainforest. 4

15. Not all coati species are well understood by science

Ring-tailed and white-nosed coatis occur within lowland habitats and are commonly encountered by people, so their ecology and behaviour are well studied. 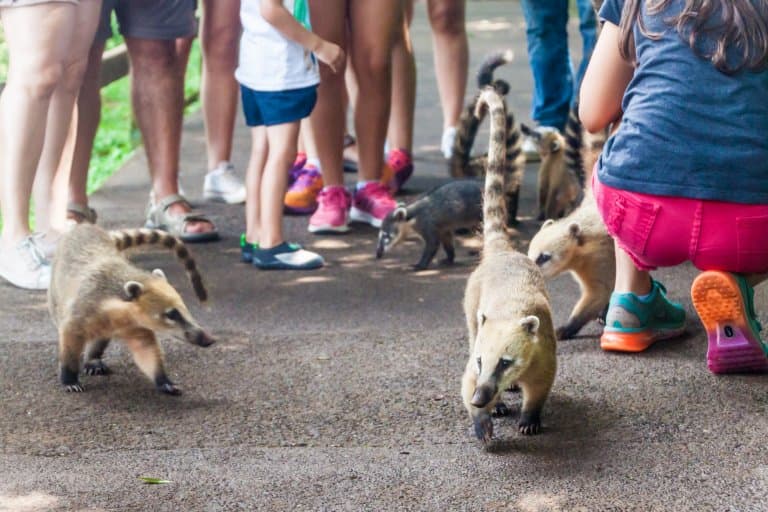