Baboons are primates that are most commonly recognized for their hairless bottoms, colorful face, and thick fur. Their muzzles are long, and they have sharp canines that help them tear into food.

They are native to Africa and are ground dwelling, live in large groups with social structure and inhabit savannah, open woodland and hills. 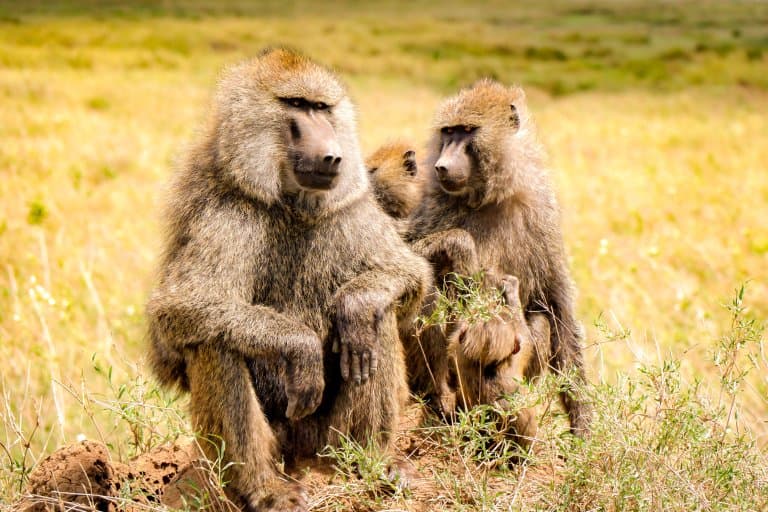 Baboons favor drier habitats such as savannas and grasslands, but they have also been found in tropical forests. The Hamadryas baboon lives near on cliffs near to the coasts of Africa and Arabia along the Red Sea.

Unlike other monkeys, they spend the majority of their waking hours on the ground. They will however climb trees in search of food, and they can sleep in trees or on high rocks and cliffs at night to evade predators. Baboons do not have prehensile tails for gripping branches, much like other Old World monkeys.

Their are six recognised species of baboon, the hamadryas baboon, the Guinea baboon, the olive baboon, the yellow baboon, the Kinda baboon and the chacma baboon. They vary in size from 50 inches (120cm) in length, down to 20 inches (50cm) depending on species.

As omnivores, baboons consume a wide variety of different foods, including insects, fruits, seeds, fish, and sometimes, even rodents and smaller monkeys. They are opportunistic that will eat virtually anything, and are active foraging for food during the day and night.

The conservation status of 5 species of baboon is ‘Least Concern‘ according to the IUCN. However, the Guinea baboon is classed as ‘Near Threatened‘.

Man-made threats, including deforestation, residence expansions, and agricultural developments continue to impact baboon habitats. Fortunately, their numbers have stayed relatively stable in the past few years.

1. Groups of baboons are called ‘troops’

Baboons are very social and are often found in groups. The collective noun is a ‘troop’ of baboons.

Each group can contain several to hundreds of members. Members hunt, groom, sleep, and eat together. The hierarchal structure of baboon troops has fascinated researchers for decades. 1 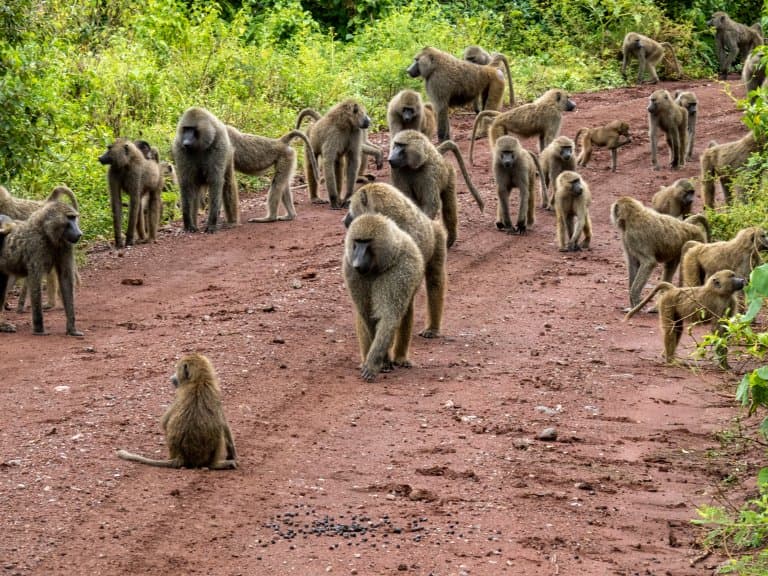 2. The redder and more swollen a female’s bottom is, the readier she is to mate

Females use their behinds as a signal to potential mates. When she is in heat, her bottom will swell and redden, indicating to nearby males that she is looking for a partner. 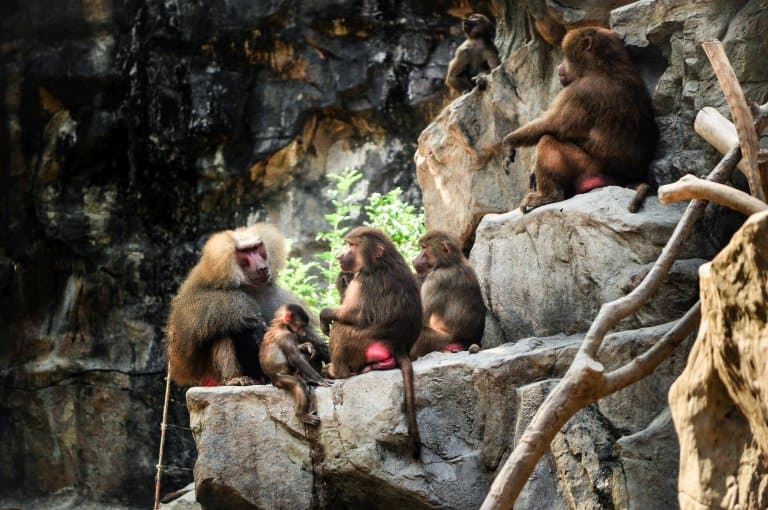 3. They have hairless pads of skin on their bums called ‘ischial callosities’

These pads provide sitting comfort and enable the baboon to sleep sitting upright on branches without falling! 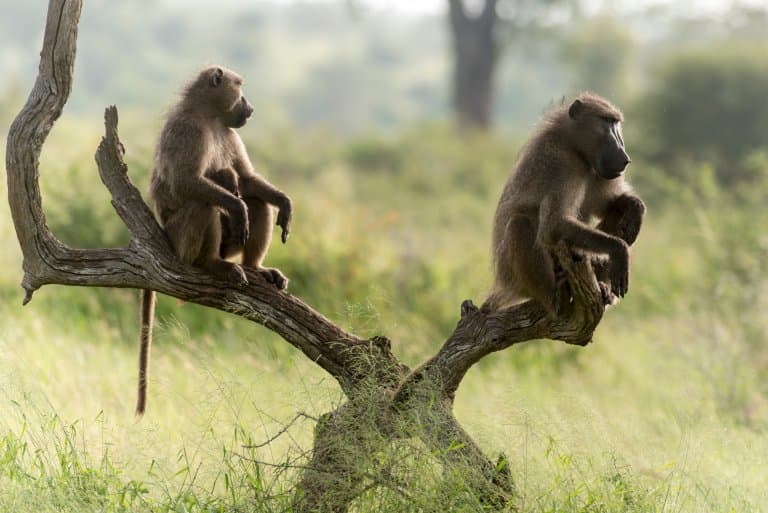 4. Some species can go days without water

When water sources are limited, they can survive solely on leaves. Some have been observed to endure for more than 11 days without water. 2

5. Baboons teeth are longer than a leopards

Male baboons can have canine teeth that measure almost two inches long. They use them in yawning threat displays to rivals, and will use them as weapons to attack prey and in self defence.

Like adult humans, baboons also have 32 teeth in their mouths. 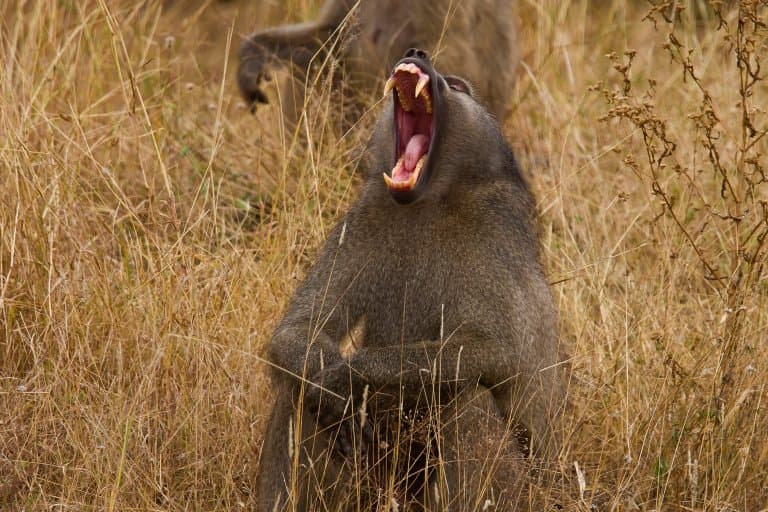 Baboons have a gestation period of approximately half a year. Usually, mothers will give birth to one infant, but there have also been accounts of twins.

7. Dominant males may kill the offspring of females they have mated with to maintain their status

Alpha males serve as the leaders of troops. In order to uphold their distinguished status, alphas have been seen attacking and killing infant baboons so that their mothers are available for mating once again. This behavior is termed infanticide. 3

Using approximately a dozen variations, baboons will use a combination of vocalizations to express themselves.

Some researchers have reported that Guinea baboons can make sounds similar to those of vowels in the human language. 4

9. There may be social reasons baboons groom each other

It is well known that baboons and monkeys groom each other to remove ticks and other pests. However, there has also been evidence of baboons grooming to curry favor and seek assistance from higher-ranking members of the troop. 5

There have been reports of mothers carrying their dead infants for over a week after their passing. This behavior suggests an emotional connection, possessed by mothers with their young, that is difficult to break after having invested so much time and effort into rearing their young. 6 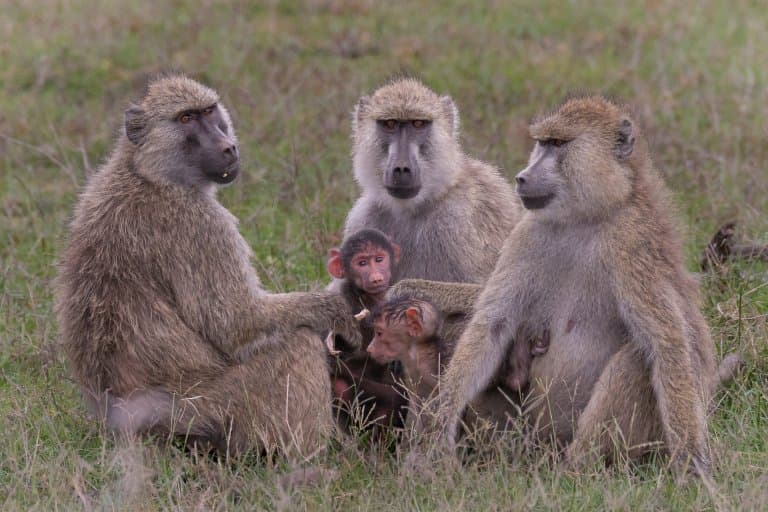 11. They cause a lot of trouble near farmlands

In South Africa, baboons are known to stir up trouble near farmlands as they will often raid crops.

Even barriers, such as wire fences, are often not enough to deter these agile animals.

12. Humans share about 94 percent of our genes with baboons

In terms of genetic likeness, baboons are closely related to humans.

13. Hamadryas baboons were revered as gods in ancient Egypt

In ancient Egyptian times, hamadryas baboons were believed to represent the Egyptian god of learning and admired for their intelligence.

Today, this species no longer exists in Egypt, but it can still be found in other areas, such as Saudi Arabia and Yemen. 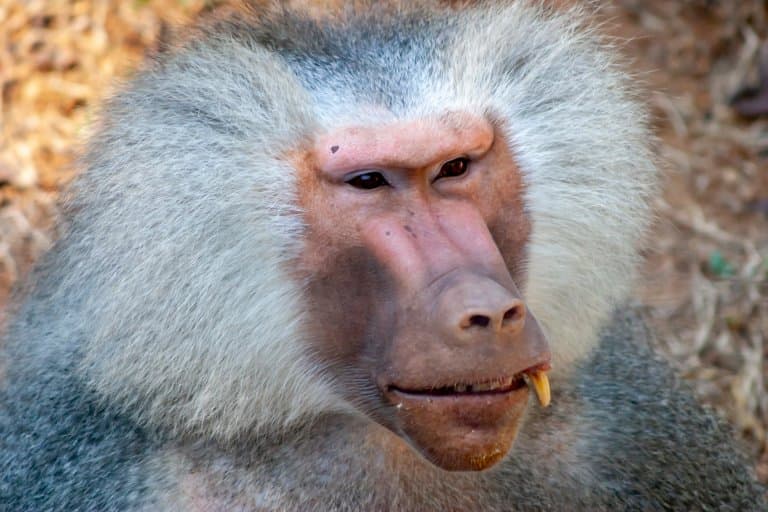 14. They are not great pets

In the USA and some other parts of the world they are kept as pets, however they are extremely strong and can be very dangerous as they get older. They are wild animals, and not domesticated.