The orchid mantis is a mantis that is also known as a living flower – and for good reason.

These insects utilize a hunting strategy known as aggressive mimicry. Because their favorite food favors flowers, pretending to be one is the perfect way to catch an easy dinner.

They inhabit tropical rainforests in Southeast Asia, and are sometimes called the walking flower mantis, and the pink orchid mantis. 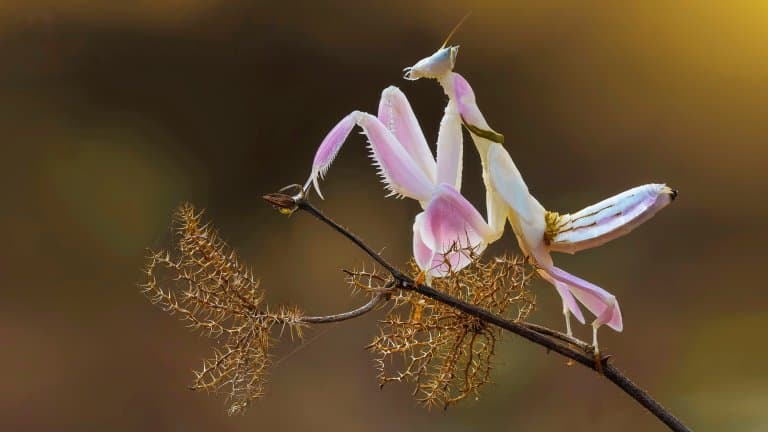 They are a species of flower mantis and their four walking legs resemble petals, while their front two toothed legs are used for ambushing unsuspecting prey at blinding speed.

They are carnivores and will diet on small insects, such as crickets, moths, flies and beetles.

These amazing insects are highly rare. They can only be found in only a few locations in southeast Asia, including in tropical forests and certain mountain ranges surrounding these forests.

Despite their rarity, however, orchid mantises are popular pets, due to their appearance and personalities.

1. They can change colors

In order to survive, the orchid mantis has had to evolve to perfect its disguise. This means that it needs to be able to blend into its habitat, which is the orchids of tropical forests in southeast Asia.

As a result, they’ve taken a card from the chameleon’s book and learned to change colors!

While you won’t find an orchid mantis switching from colors like red to blue, they can change from a light whitish pink to brown. This helps them to better mimic their environment – and, as a result, hide from predators and catch more prey. 1 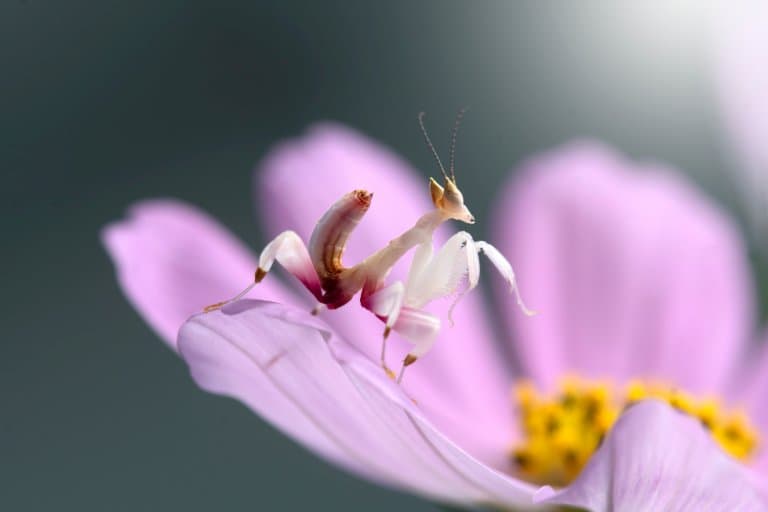 2. They are so convincing, they attract more bees than flowers

In a field study performed in Malaysia, researchers found that the orchid mantis attracted more bees, than real flowers around it.

3. Orchid mantises aren’t the only type of flower mantis

If you happen to see a flower moving, there are more possibilities than just orchid mantises. In fact, orchid mantises are just one type of possible flower mantis.

Although they are not the same species, they are similar in that all types of flower mantises rely on aggressive mimicry to blend into different types of flowers and catch their prey. 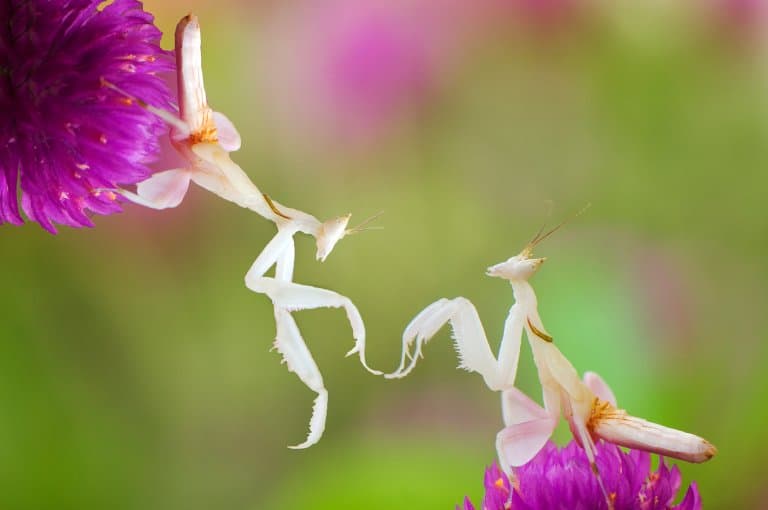 4. The first person to record the orchid mantis didn’t know they were real

One of the first appearances of the orchid mantis in scientific literature can be traced back to James Hingston. In 1879, Hingston was traveling through West Java, one of the few places where orchid mantises are found naturally.

During his travels, Hingston came across a flower garden where he watched a flower eat a butterfly!

Of course, at the time, he didn’t know it wasn’t a flower. Instead, it was a hungry orchid mantis showing off its amazing hunting prowess. 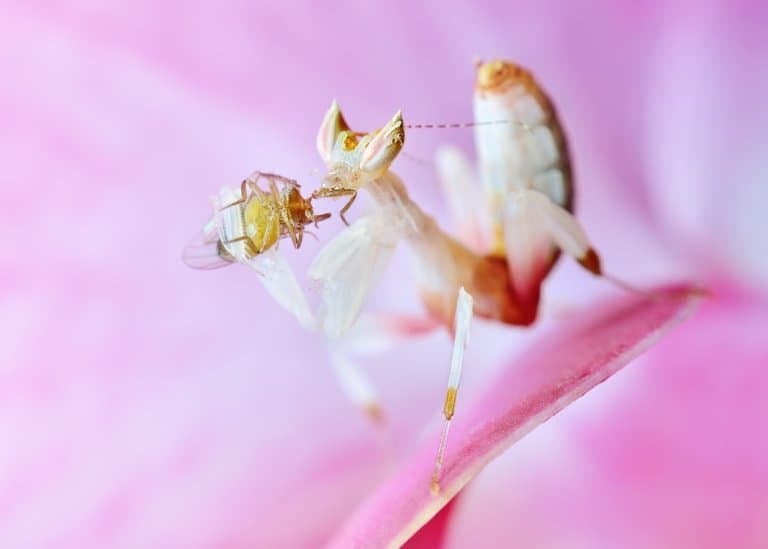 Although they blend in perfectly with certain types of flowers, orchid mantises don’t spend all their time on the ground.

Instead, they actually possess two different sets of wings that are perfect for flying. This helps them move from flower to flower with ease. It also helps them to navigate the rainforest.

All mantises have two sets of specialized wings. The first pair is known as the tegmen. These wings are rough and help protect the inner wings, which are much more fragile.

6. Orchid mantises are some of the top insect predators

Despite their small size, orchid mantises are some of the most effective hunters in the insect world.

Orchid mantises have been known to take down prey larger than themselves. This includes animals like frogs, rodents, and even birds!

Orchid mantises are like every other wild animal in the world: they’re set on surviving. As a result, if you are to startle or scare one while handling it, it may bite you!

They have small mouths, and they don’t have any type of venom or sting. As a result, while the area may be irritated, it usually isn’t a call for concern.

This also makes them a safe pet to keep – and many people do! However, despite how strong they may seem, they’re still extremely fragile. Thus, it’s important to always take care when handling them.

This isn’t just for your safety, but theirs as well!

8. The orchid mantis doesn’t go through a larvae stage

Unlike many insects, orchid mantises don’t go through a larvae stage. Instead, in between their egg stage and adult stage, they’re in what is known as a nymph stage.

Here, their bodies are almost fully developed. In the future, they’ll just need to grow their two sets of wings. They’ll also need to molt from the hard exoskeleton that helps keep them safe as a nymph.

When they shed their exoskeleton, orchid mantises officially reach adulthood. As a result, it’s similar to a caterpillar coming out of its cocoon!

9. They don’t mimic a specific orchid

Despite being named the orchid mantis, and looking somewhat like an orchid, behavioral ecologist James O’Hanlon who studied and performed field experiments with orchid mantises concluded:

“there no compelling evidence to suggest that orchid mantises mimic a specific orchid, or any other specific flower.”

After studying flowers in the region, there was no exact match, and he argues they present a more generalized colourful flower to attract prey. 2 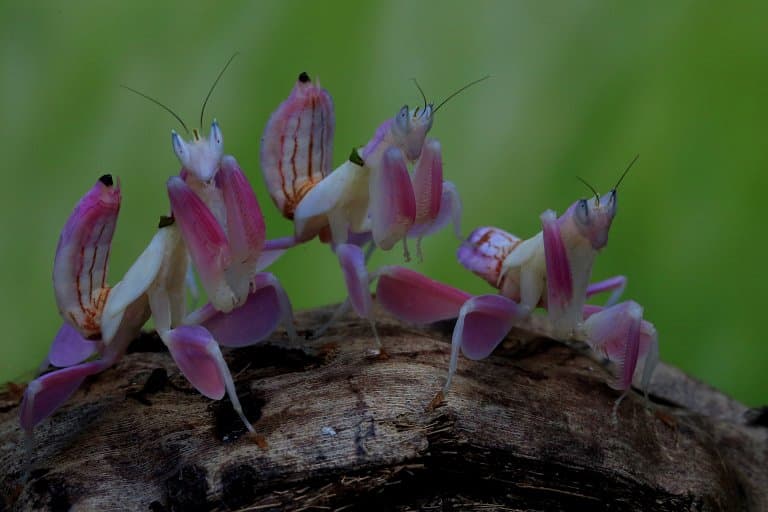