There’s a roundish little predator wandering about in the bushes of Southeast Asia and India. It’s a peculiar individual, even among its relatives. Its name is Gongylus gongylodes, and it’s commonly referred to as the violin mantis on account of the shape of its body.

Its a species of praying mantis, with long, spindly limbs that support a bizarre thorax that resembles the soundboard of a violin and its elongated long neck tipped with an arrow-shaped head completes the costume, giving the mantis its name. 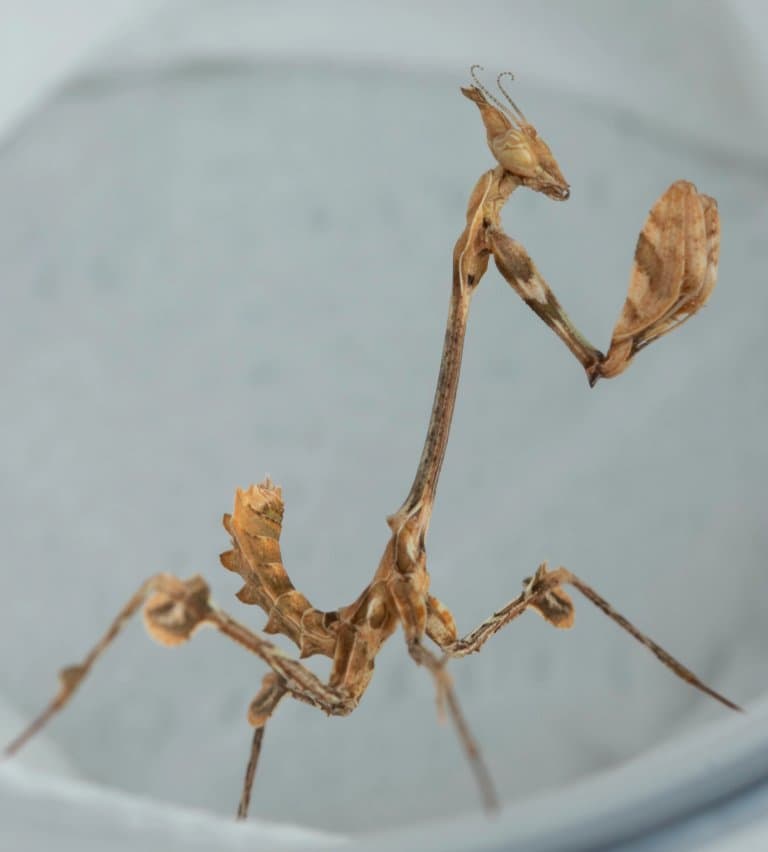 If it wasn’t for the wandering violin mantis’ near-perfect imitation of the foliage of its natural habitat, this strange-looking invertebrate might seem more at home in a work of science fiction or Lewis Carroll fantasy, than in the tropical forests of Sri Lanka or India.

The wandering violin mantis likes to diet on flying insects, such as flies, moths, butterflies and more. They sit still and wait for the insect to fly past before catching it and eating it.

They also have some peculiar social traits, and unusual defenses that make them a stark contrast to most other mantises in their family. They hear with a unique organ in their thorax and are quite comfortable hitting the deck hard when they have to. And if you’re ever in their habitat, there’s a good chance there’s one looking right at you.

1. The males can fly

Many species of mantis either do not develop wings or their wings are not suited for flight. Often mantis wings are utilised as a part of their displays of mimicry or to support bright threatening colours. Females are typically much larger than males, and therefore often struggle with flight, or can’t fly at all.

Among the Gongylus species, only the males are capable of flight. This is what allows them to take to the skies at night and follow sex pheromones to find distant mates.

2. They were originally thought to be crickets

And the original observations he recorded on this mantis focus on the physical similarities of the mantis to typical cricket-like features. Modern revisions of classification, however, have placed mantis in the order Mantodea a different order to crickets and other orthoptera.

Incidentally, Linnaeus was doing the best he could with the technology available and paved the way for modern taxonomic classifications, so please don’t go too hard on him.

And coincidentally, the wandering mantis was the first mantis ever described by Linneaus, in 1758! 1

3. They live in groups

Quite unusually for a mantis, this walking stinged instrument can often be found in social gatherings. While most mantids are notorious cannibals, wandering mantises are much more civilised, and will only resort to eating one another when resources are particularly short.

This makes them a popular pet among insect owners as they are observably less aggressive than most mantis species. As a result, several of them to be kept in the same display, as long as they aren’t left to get too hungry…

4. Camouflage isn’t this mantis’ only defence

Like most mantis, the wandering violin mantis relies on crypsis or mimicry to avoid predators and to ambush prey. In fact, all Gongylus species are known as “floral simulators”. This sounds like a really boring PC game, but it basically means they look just like flowers.

However, it also has a secret weapon, if disturbed, it will break its attempt to hide and begin sudden threatening movements, while at the same time rubbing its serrated forewings against its hind legs.

This rubbing may sound more seductive than intimidating on paper, but in real life, it produces a loud hissing sound that confuses and perturbs its would-be predators. 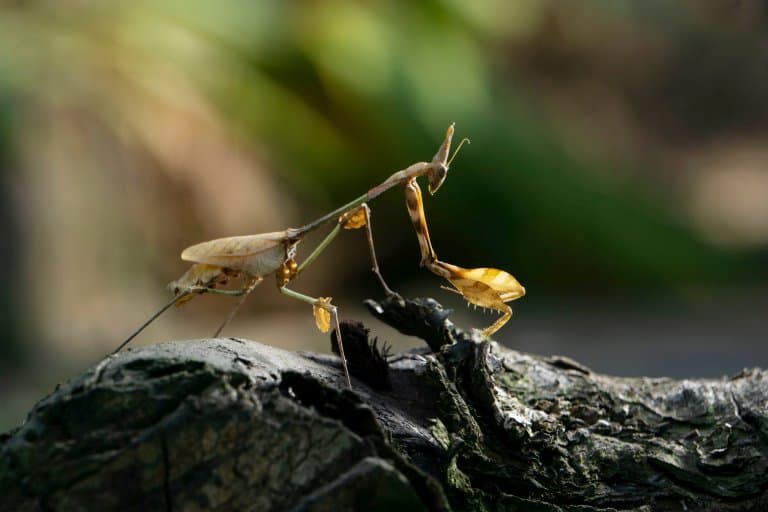 5. An insect with one ear

You, hopefully, have two ears. Most animals with ears do, in fact. Paired ears is the norm in the animal kingdom, but this critter never had any intention of being normal.

Like most mantids, the violin mantis has a single ear inside its thorax. In its defence, the ear does consist of two lobes, but they are part of the same organ.

With this ear, the mantis is able to hear ultrasonic frequencies, which is particularly useful for picking up on bat noises. Which is the subject of our next fact. 2

Since bats seem to cause this mantis a headache when in the air, it has quite a nifty trick up its sleeve to avoid them. When the mantis senses the bats’ echolocation, it’s able to accelerate downwards, faster than in freefall, and if necessary crash at full speed into the ground.

The mantis has very low mass and is, therefore, able to survive such a collision. The bat, on the other hand, will almost certainly choose not to follow it. 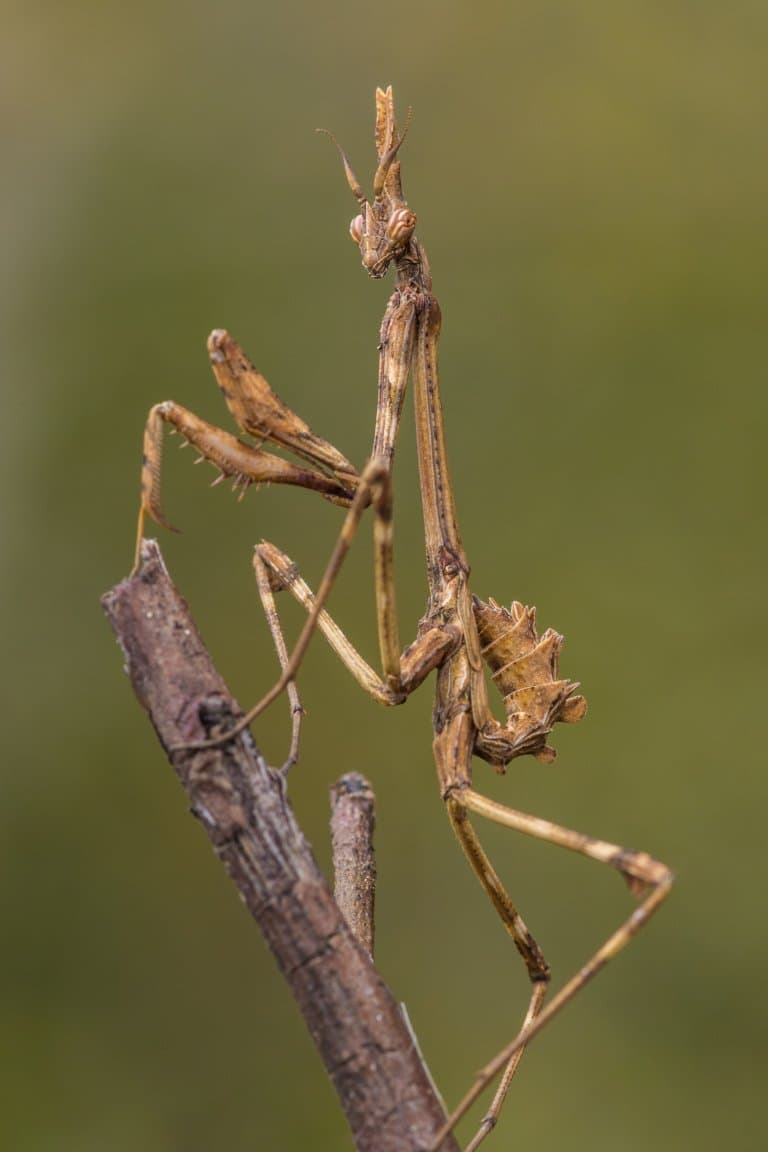 Or at least, there abouts. In Greek, the name for this mantis’ genus, Gongylus means “roundish”, and the species name comes from the same word. It’s also used in botany, in the example of a particularly roundish roundly cabbage called kohlrabi.

As well as being called the wandering violin mantis they are sometimes also referred to as the ornate mantis, or Indian rose mantis.

8. They can turn their heads 180 degrees

Much like the terrifying little girl in The Exorcist, the violin mantis can rotate its head all the way around. In fact, pretty much all mantids can do this, and it’s very unusual for an insect.

Mantises have particularly human-like head movements, especially for an insect, and can look around the room with their powerful eyesight, and even follow your finger if you move it in front of them.

These are all adaptations to hunting, and help the mantis stay stealthy while identifying and locking onto its prey item. 3