The okapi has several different names including zebra giraffe, Congolese giraffe and forest giraffe. It’s a cloven-hooved mammal native to portions of the Democratic Republic of Congo in Central Africa.

Although it resembles a zebra with its striped markings and appearance, genetically the okapi is related closer to the giraffe. 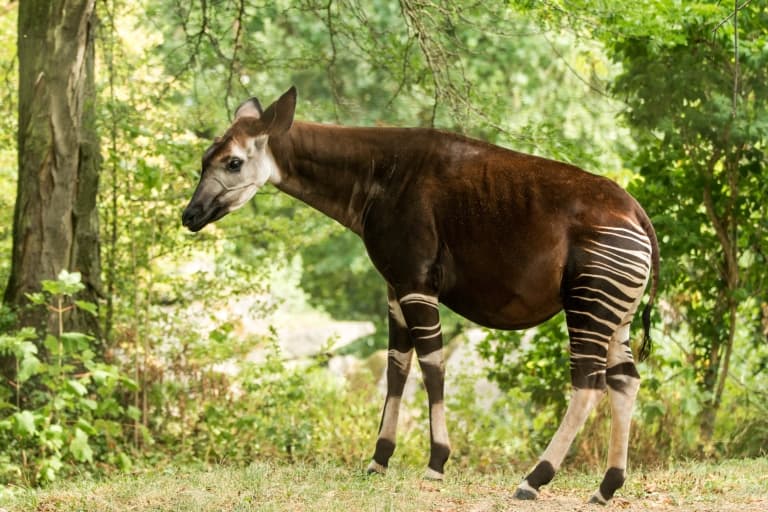 Known to be mostly diurnal, okapi may be active in the first few hours of darkness at night. They are solitary mammals who will only join others in order to breed. On occasion, small groups may join together to feed over short periods of time.

Home ranges of the okapi can overlap where males will have a larger territory than females. Both will use urine for marking as well as rubbing their necks on trees. The males also use their necks in fighting situations where territorial disputes may arise. The male will also fight with their necks with other males when competing to mate with a female.

As the okapi has poor eyesight, communication is generally conducted with what has been described as a quiet ‘chuff’ sound. They also rely heavily on their hearing in and around their forest surroundings.

The okapi diet is that of a herbivore where they will consume tree leaves, buds, grasses, fungi, fruit and ferns. The okapi is known to eat more than 100 different types of plant including some that are poisonous to other animals as well as humans. In addition to eating a vast selection of plant life, the okapi will also consume a reddish clay native to their homeland. It is believed that the clay provides the animal with essential salt and minerals to compliment their mostly plant diet. They live in canopy forests in higher altitudes ranging from 1,600 to 4,900 feet above sea level.

The okapi is classified as endangered by the IUCN and is completely protected under Congolese law. Although there continues to be a decline in population, the Okapi Wildlife Reserve and Maiko National Park are home to a significant number of these animals. Major threats to the okapi are habitat loss due to logging and human settlement.

The okapi has also been threatened by extensive hunting for bush meat and skin. Illegal mining of each has contributed to the population loss. Another recent threat that has surfaced is the presence of illegal armed groups around protected areas. It is with these groups in place that conservation and monitoring activities of the okapi population is impacted.

The last estimate conducted by the IUCN pegged the remaining population of okapi in the Democratic Republic of the Congo at being between 10,000 – 30,000 still living in the wild.

1. The okapi is one of the longest living species on the planet

They are often referred to as a ‘living fossil’, as the okapi has existed over a long geological time period and actually resemble primitive forms such as the Samotherium.

The Samotherium is an extinct genus of Giraffidae which is thought to have lived around 7m years ago.

2. They are also known as forest giraffes, Congo giraffes, or zebra giraffes

Like the giraffe, the okapi has long legs, a long neck, and broad, flexible ears. However, it is much smaller in stature than a giraffe. 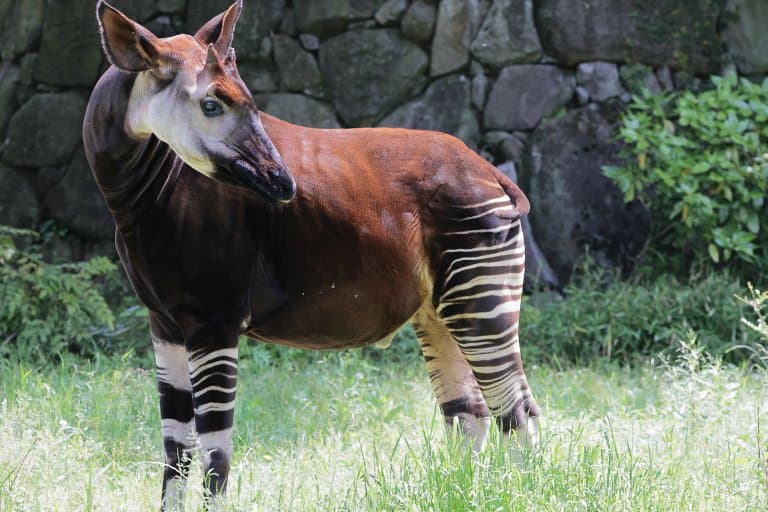 The okapi’s striped legs make it look like a cross between a giraffe and a zebra.

3. They are not related to zebras

Okapis are even-toed ungulates, meaning that they bear weight on 2 of their 5 toes. Zebras, however, are members of the Perissodactyla order (odd-toed ungulates) and related to horses.

4. Okapi are 1 of only 2 members of their family

They belong to the Giraffidae family and are the only living relative of giraffes. 1

5. Their scientific name is a combination of history and science 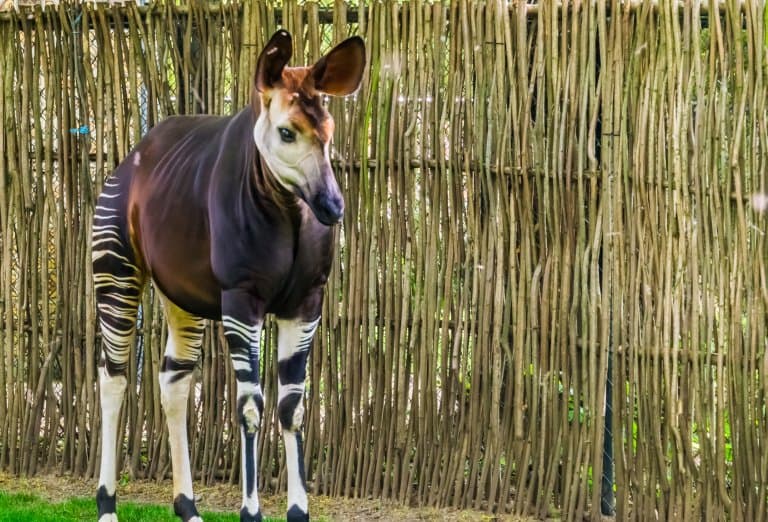 6. Okapi were unknown to the Western world until the 20th century

Although the first sightings of okapi are unknown, art from the 5th century BCE depicts an animal that resembles an okapi. The first okapi specimens in the Western world were brought by thee British naturalist Sir Harry Johnston, who learned of the animal from Pygmy inhabitants of Africa. He never saw a live okapi but was able to bring some of its striped skin and its skull back from his travels. The species was given its first official scientific name in 1901, when it immediately sparked discussion of the animal’s origins among scientists. 3

7. They have a small natural range

Okapis are native to the Democratic Republic of the Congo, where they live north and south of the Congo River. 4

8. No one knows how many okapis exist in the wild

The okapi is a naturally shy and elusive animal, and it is rarely seen in the wild. This makes it very difficult to track and count them. Scientists estimate that approximately 35,000 survive in their natural habitat, but no one knows for sure.

Male okapis have small bony cone-shape protrusions called ossicones on their skulls. These bumps are covered in skin and soft to the touch. Female okapis have no ossicones; instead, they have whorls of hair where the ossicones would be.

They have what are known as prehensile tongues, meaning that okapis can use their tongue almost like another limb. Their tongues are strong and flexible enough to pull down leaves, buds, and. Branches from tall trees. Okapi tongues are so long that they can lick their own ears! 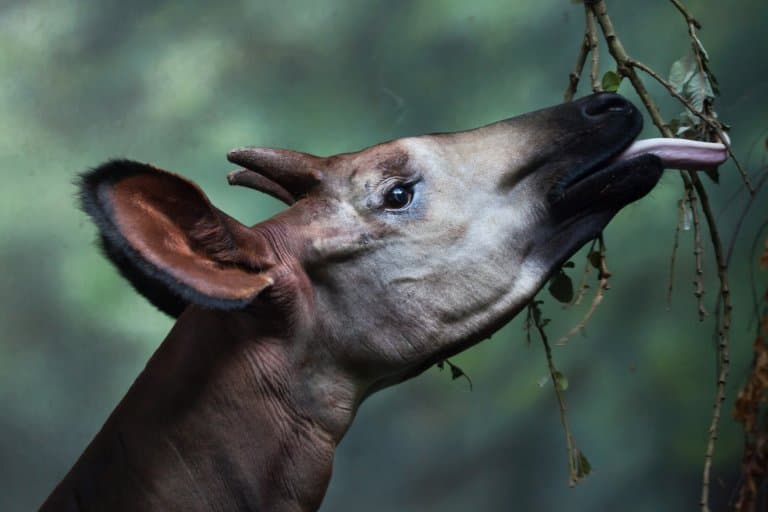 11. Their stripes serve a purpose

An okapi’s stripes look similar to the pattern of light through a forest and serve as camouflage. Their stripes may also help young okapis find their mothers in the dark rainforest. 5

12. They have a wide vocabulary

Okapis have poorly developed vocal cords. As a result, they communicate in a series of chuffs, bleats, and moans.

They forage for food in established areas, frequently following the same paths regularly. Over time, these “food trails” develop, and okapis will travel along them searching for their daily meals.

14. Their sense of smell is an important tool

Okapis have finely tuned senses of smell, and they secrete tarry and oily substances with strong odors. They rub these substances on trees and leave scent trails wherever they walk, enabling other okapis to find them. 6

Male okapis will defend their territories from other males and prevent them from entering their area. However, males will allow female okapis to enter the same areas so they may forage for food.

16. They stay pregnant for a long time

The gestation period for an okapi is between 400 and 450 days. More than a year after becoming pregnant, the female okapi will give birth to a single calf.

17. Young okapis can stand within 30 minutes of being born

As with many ungulates, young okapis quickly develop the ability to stand, walk, and run on their own. This can happen in as little as 30 minutes after being born. 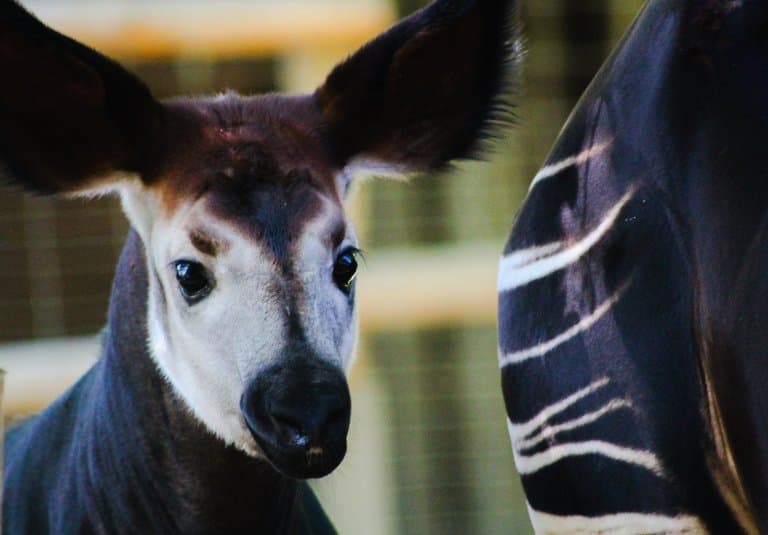 18. Leopards are their main natural predators

In the wild, an okapi’s main threat is the leopard. These large predators will stalk and hunt the elusive okapi throughout the rainforest.

19. Humans are their biggest threat

Humans are more threatening to okapis than leopards. Booming bushmeat and leather industries, logging, and human settlement have shrunk okapi populations to the point that they are considered endangered.

20. People around the world have joined to protect them

The Okapi Conservation Project was established in 1987 and brings people around the world together to protect this unique species. This project not only establishes methods to conserve okapi territory and defend the species from harm; it also supports and protects the Mbuti people, who share a home with the okapi. 7

21. Okapi do not appear in many zoos around the world

Simply because the okapi can be easily traumatized, shipping them aboard planes or ships is not possible. The trauma they experience is so severe that few have survived a trip to a zoo or natural preserve away from Central Africa.