For an animal with a Latin name that sounds a lot like a flesh-eating disease, the numbat couldn’t be a better example of “don’t judge a book by its title”.

This animal is a small, cute little icon of Western Australia, and for good reason.

Its squirrel-like appearance, humble presence, and penchant for termites make it a popular local in its greatly reduced habitat. 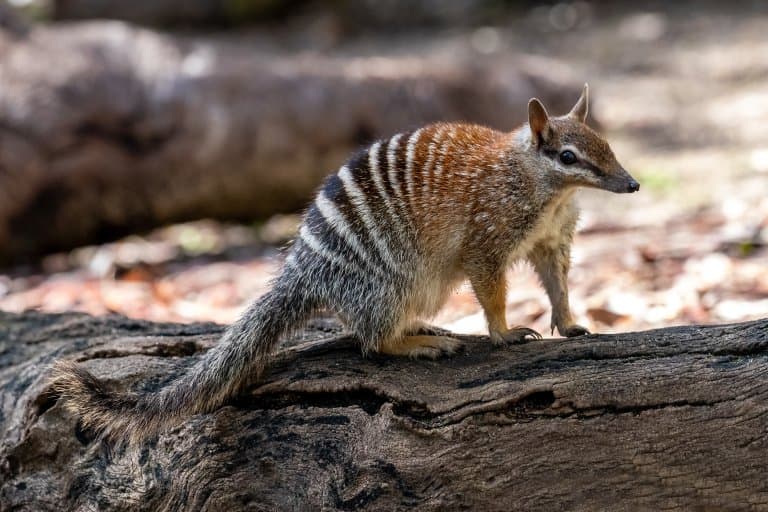 These tiny “anteaters” may look the part, but they’re not entirely what they seem.

Despite being an icon of Western Australia, their numbers are dwindling and without drastic and often tragic intervention this humble marsupial, just like many of its fellows, is likely to disappear forever.

They are solitary and territorial creatures that nest in logs, tree hollows, or dig burrows to shelter during the night, and come out to feed in the daytime for termites. In breeding season, males will venture outside their range to find a female mate.

Drastic and tragic interventions are in place and show promise for certain populations. With a little luck and a change in social consciousness, numbats stand a chance at a remarkable recovery.

1. They have a long, sticky tongue

Numbats are tiny little anteaters, and as such, they have tiny little anteater adaptations. These include powerful claws, a long snout, and a tongue that’s longer than their head. This tongue is sticky, and it’s used for retrieving its prey from inside logs and leaf litter.

However, unlike other anteaters, numbats feed almost exclusively on termites despite being called a ‘banded anteater’ and ‘marsupial anteater’, but it was only discovered that termites and ants are unrelated after the names had stuck.

Regardless, this small animal is so well-specialised that it can consume 20,000 termites in a day.

The numbat is considered very fondly in Australian culture.

The name itself is often used as a slang term for someone who’s endearingly foolish, and the animal itself is the emblem of Western Australia.

3. Numbats are cousins of the extinct Marsupial Wolf

Numbats are in the order Dasyuromorphia, which includes some of the most iconic native fauna.

The Quolls, Tasmanian Devils and Bandicoots are in the same order, as was the extinct Thylacine or marsupial wolf. 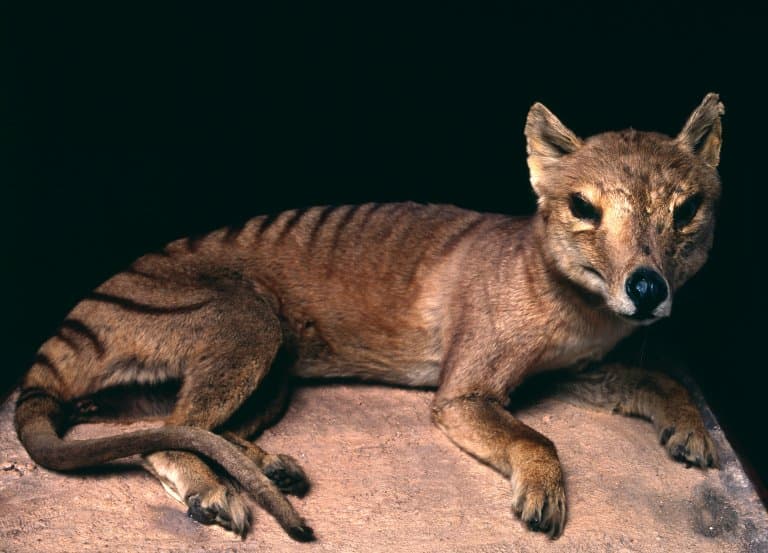 4. They’re one of the only diurnal marsupials

If there’s one thing everyone knows about Australia it’s that it’s hot. This is a problem for a lot of mammals, who choose to come out in the evening and during the night to avoid the inhospitable temperatures.

Numbats, however, aren’t concerned with the heat and are unique in their diurnal (active during the day) behaviour. 1

5. They have no pouch

Unusually for a marsupial, female numbats do not have a pouch for their young.

When they are born baby numbats are around 2cm in size, and will attach to teats of the mother to feed for months until they grow to around 7.5cm.

The mother can leave young in the nest or carry them on her back after weaning.

6. Despite their teeth being useless, they have more than most mammals

As with most animals who specialise in ants and termites, Numbats have teeth that are considered redundant. Still, for some ancestral reason, they have an extra cheek tooth, bringing their cheek teeth to between 7 and 8 in the upper jaw and 8 to 9 in the mandible.

This is more than any other Australian mammal, and it’s thought they’re used only for manipulating nesting material.

7. They have lost most of their range

Before the arrival of European settlers in Australia, numbats occupied an enormous range, from Southern to Western Australia, to New South Wales.

It’s impossible to estimate their true numbers, but it’s thought that only two original populations have survived, and they now occupy less than 1% of their previous range.

Around 1,000 individuals remain, their numbers having been decimated by introduced predators. 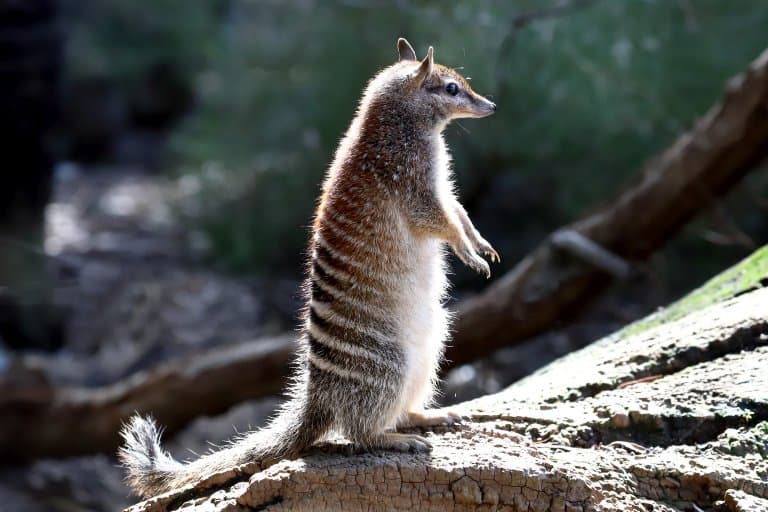 8. Cats are a substantial threat

Not many people understand the damage that common pet cats can do to local fauna. In the UK, pet cats kill around 270 million native animals a year, with around a quarter of those kills comprising local bird species. In the US, that number is in the billions. This is a significant amount of ecological damage, and it amounts to an unsustainable cost to an already deteriorating landscape of fauna.

In Australia, cats are one of the single most destructive influences on numbat populations, and along with other introduced species like foxes, have contributed to the current conservation status of the now-endangered marsupial.

While it is ‘natural’ for cats to hunt, they are being artificially introduced into ecosystems that didn’t evolve to sustain them, and this is where the problem lies. 2

There are no winners when an invasive population of predators takes over. House cats ultimately breed feral cat populations, and feral cats can easily kill 12 animals in a night. As their numbers grow, local fauna decreases to dangerous levels. This leads to the need for conservationists to employ drastic measures to curtail the effects.

Using a poison that local animals are immune to, cats in numbat territory are now being poisoned in their hundreds. This is not a good way to die for any animal, but given the resources available, it’s the only way for conservationists to protect the local inhabitants and offer them a chance of avoiding extinction.

The only way to avoid this ongoing tragedy is for cultures to shift towards a more responsible way of owning cats. Housing them indoors, and making sure they are spayed and neutered by default. 3 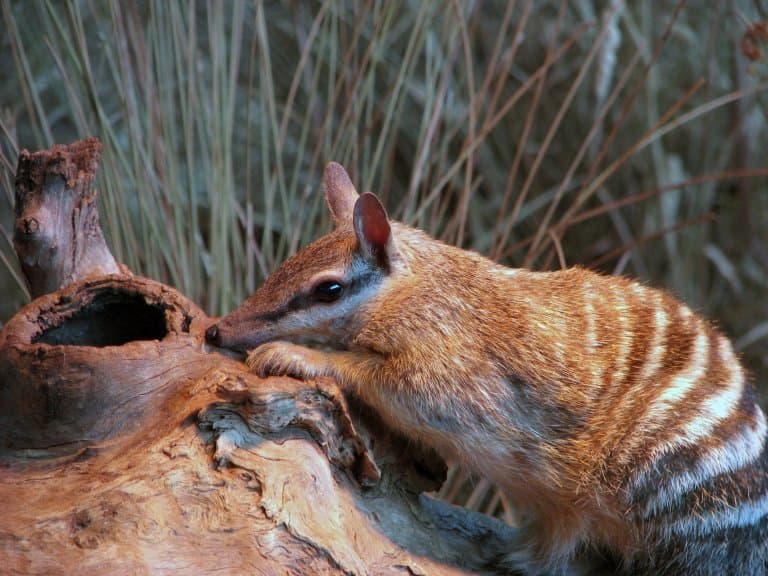 10. A brighter future for the tiny termite terroriser

Since concentrated efforts killed over 700 cats in the Dryandra woodland population in Western Australia, numbat populations have “exploded” from around 50 individuals to well over 400.

Further, other threatened animals in the area like the woylies and the possums have returned in large numbers.

If this level of protection can be maintained, there is still hope for local populations to bounce back, but until individuals around the world understand and appreciate the damage that irresponsible cat ownership can cause, there will always be a pressure on wild fauna from cute, but invasive predators. 4