Meerkats are small mongoose, found in Southern Africa. Omnivorous, they spend their lives in the deserts eating almost everything, including venomous scorpions!

You can find meerkats in the southern regions of Africa. They live in the Kalahari Desert in Botswana, as well as the Namib Desert in Namibia. You can also find them in Angola and South Africa. 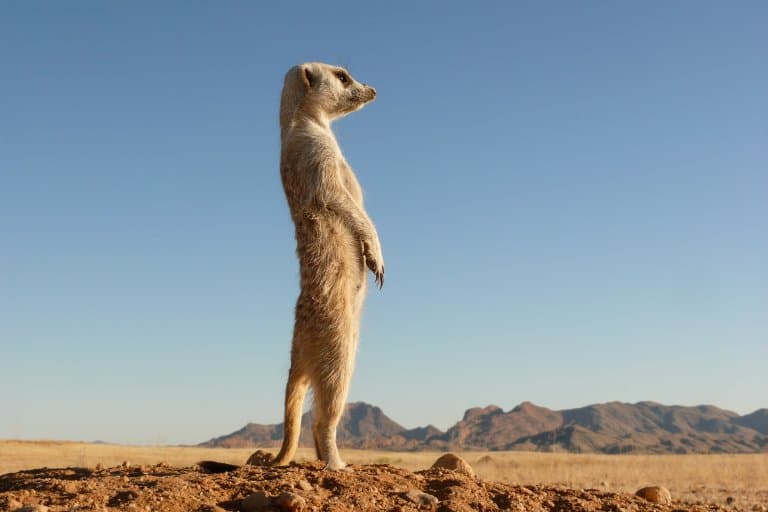 Meerkats are social, and live in packs of up to 30 that may be called mobs or gangs. They inhabit rock crevices, and large burrow systems in the ground of open plains. While meerkats are excellent diggers, they will often move into burrows made by other animals.

There is no specific name to differentiate between male and female meerkats. However, there are alpha and beta members in each pack. There is also a surprisingly cute name for baby meerkats: meerkittens! They are also referred to as pups or, more rarely, cubs.

Johann Christian Daniel von Schreber first described meerkats in 1776. There are many possible origins for the meerkat’s name. Some refer to similar species, while others are possible references to the meerkat’s insect diet. 1

Meerkats primarily like to eat insects, such as beetles, butterflies and moths. However, they will also diet on eggs, scorpions, reptiles, plants and even snakes!

The meerkat is classified as least concern by the IUCN Red List, as there are no real threats to their populations currently. One of the biggest threats to meerkats is low rainfall, which can lead to the death of entire packs due to starvation.

One of the most surprising facts about meerkats is that they are omnivores. This means that along with plants, they also eat other animals. One of their most popular picks is termites, which their name may be a reference to.

Meerkats are actually expert hunters. Despite their small size and cute appearance, they can hunt everything from termites to small birds, to venomous scorpions! 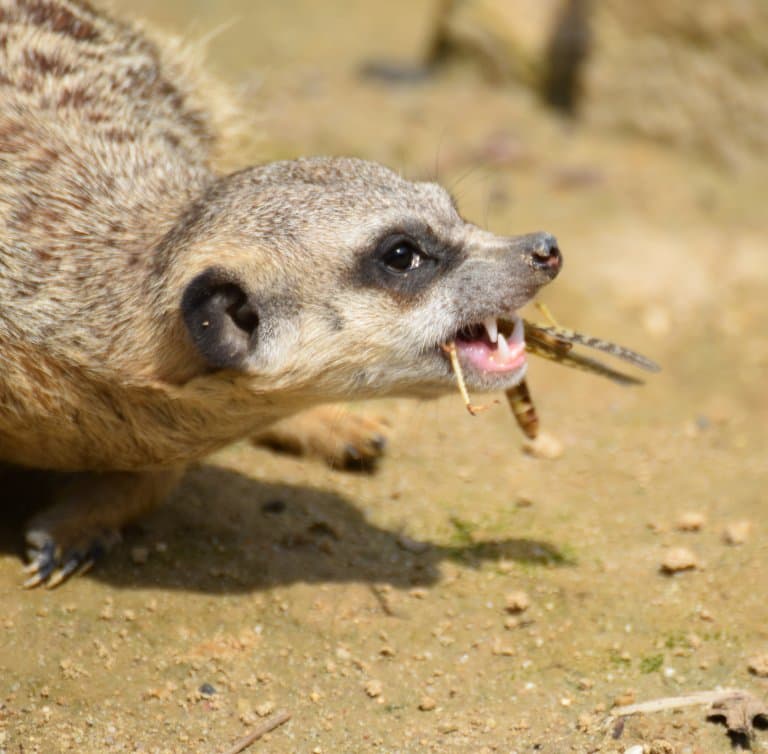 2. They’re not related to cats

Despite having “kat” in the name, meerkats aren’t actually related to cats.

Instead, they’re a type of mongoose. The mongoose is a unique carnivore found in Africa, which has a knack for being immune to most snake venoms.

Meerkats are what is known as a cooperatively breeding species. This means that they raise their babies as an entire group.

However, in order to make such a system work, there are roles. As mentioned before, there are alpha and beta meerkats. Alphas are the leaders of the group. They’re the ones that breed and help the pack to flourish. The other meerkats, those that don’t breed, help raise and keep the pups safe.

4. Meerkats are immune to venom

As a member of the mongoose family, meerkats are actually immune to certain types of venoms.

They may feel unwell for a few hours following the bite as their body fights the venom, but they will ultimately make a full recovery.

Because of this natural ability, families in many regions keep meerkats as “pets”. Here, meerkats are actually workers who help protect their humans from snakes that we aren’t so immune to.

Not only are meerkats immune to certain types of snake venom, but they’ve also mastered a technique at expertly preparing scorpions so they don’t get hurt.

Scorpions also have venom in their exoskeleton that could hurt the meerkat while eating. As a result, meerkats have learned to rub scorpions in the sand in order to remove any venom left in the exoskeleton.

6. Meerkats are some of the most intelligent animals

Meerkats are much more intelligent than they were initially given credit for. When you think of intelligent animals, you probably think about dogs, elephants, and dolphins.

7. They stand on their hind legs as a look out

This gives them more height to look out for predators, such as birds of prey and snakes that prey on meerkats. This means they need to watch the skies, as well as the ground.

The slightest movement or sight will cause meerkats to sound the alarm and disappear into their burrows for safety. 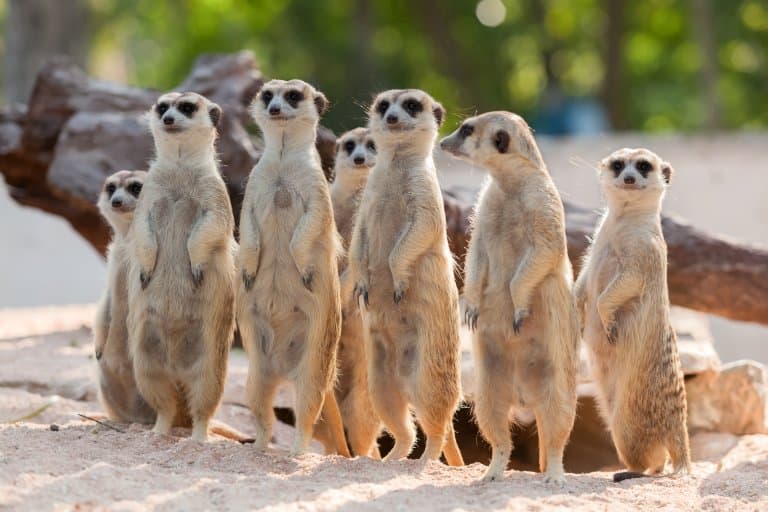 Living in a desert, you’d think that meerkats would be awfully thirsty. However, this isn’t exactly true. In fact, meerkats don’t even drink water!

Instead of seeking out lakes, puddles, and other sources of water like a human would need to in order to quench their thirsts, meerkats have everything they need in their diet.

Meerkats are able to absorb enough water from the animals and plants they consume, ensuring that no matter the climate, they’re able to survive and thrive.

9. They have amazing vision

A meerkat’s vision is its most developed sense – surprising since most animals seem to favor smell. Their eyesight is good enough that they can spot a single bird miles away.

The dark patches around their eyes are thought to help reduce glare from the sun and help them see far into the distance in the sunny desert.

This helps them to keep their packs safe from predators by giving them enough time to return and hid in their burrows.

10. Meerkats have no body fat

If you’re wondering why meerkats are so small, it’s because they don’t actually have any body fat.

Body fat, known offically as adipose tissue, is important. When animals like us humans go without food, our body is able to break down fat tissue and keep us alive.

Meerkats don’t have this advantage. As a result, since they lack body fat to store energy, meerkats need to spend their hours foraging and grazing on the food available to them.

They can spend nearly five to eight hours foraging every day.

Fortunately they have a metabolic rate considerably lower than other carnivores, which allows them to conserve water and survive on less food.

They have specialized built-in thermoregulation that allows them to survive their harsh dry desert habitat.

Their heart rate and oxygen intake can slow, and they can sweat when they become too warm, allowing them to stay within comfortable boundaries – despite the temperatures around them. 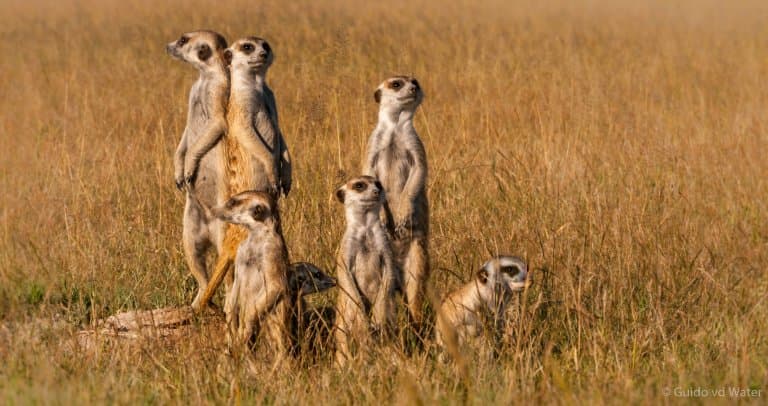 12. Meerkats have at least 12 different types of vocalisations

They are highly vocal and will use different vocalisations to communicate different things, and they can include yelps, growls, spits and more!

A study recorded 12 different types of calls used in different situations, such as predators, digging, sunbathing, caring for young and more. 3

Typically they are much smaller, around 5m in size, with 3 levels and a dozen openings. However, there are some reports of burrows as big as 30m (100 feet), with nearly 100 holes!

Burrows provide a comfortable escape from the harsh desert conditions and protect meerkats from extreme weather. They have separate chambers for sleeping, and the bathroom!

Meerkat mobs are territorial and will fight with rivals gangs if necessary. While they will often try and avoid conflict, from time to time two clans will clash.

These conflicts can be deadly, and a 2016 study published in the journal Nature found that up to 20% of meerkat deaths are caused by fighting. 4

Meerkats have been widely portrayed across film and TV.

There’s Meerkat Manor a television series on Animal planet, Timon the meerkat from Disney’s Lion King, as well as ‘Compare the Meerkat’ an advertising campaign which followed Aleksandr Orlov a CGI Russian meerkat from insurance provider Compare the Market.