The maned wolf is an elegant, long-legged and bushy canid (member of the dog family) with red hair from South America.

This omnivorous canine looks more like a fox than a wolf, but it’s actually neither. It has its own lineage, related mainly to other extinct canids, and is the only member of its genus. 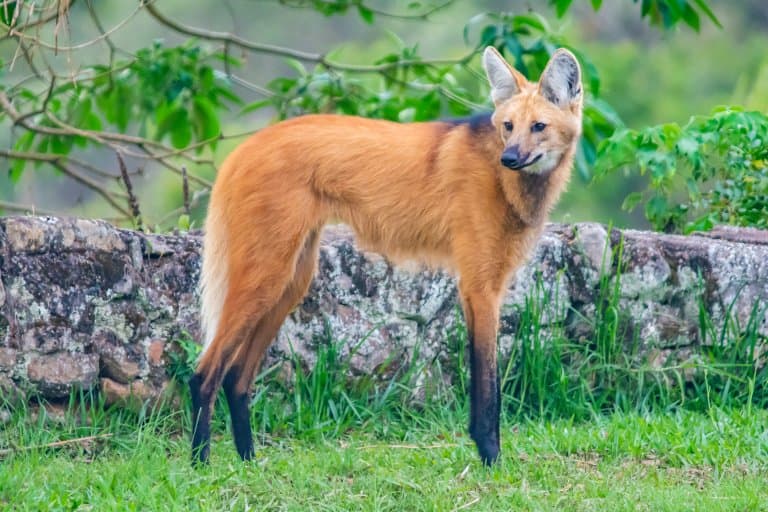 These are highly-specialised animals, with tall, slender builds adapted for grasslands and large, well-developed ears for regulating heat in hot, dry environments.

Maned wolves have large ears which help them hear and they rotate them to listen for prey in the long grass when hunting.

They’re the largest canid in South America and are given their name for the bushy black hair on their necks. The closest relative to the maned wolf is the funny-looking bush dog Speothos venaticus, with which it shares its habitat.

These elusive dogs are not well-understood and there’s still a lot to learn about them.

Unfortunately, they’re threatened with extinction as their habitats are being destroyed, primarily by global agriculture industries.

Despite their looks, the maned wolf is unique and has its own lineage, related mainly to other extinct dogs also called ‘canids’, and is the only member of its genus. 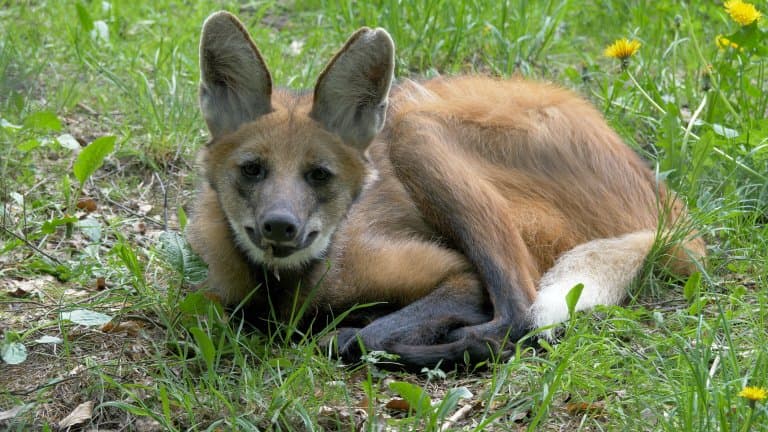 2. The maned wolf is the tallest wild canid

Living in tall grasses has led the maned wolf to evolve equally tall stature. Its legs can be longer than the length of its spine, making this lanky canid well adapted for peering over the scrubby brush. 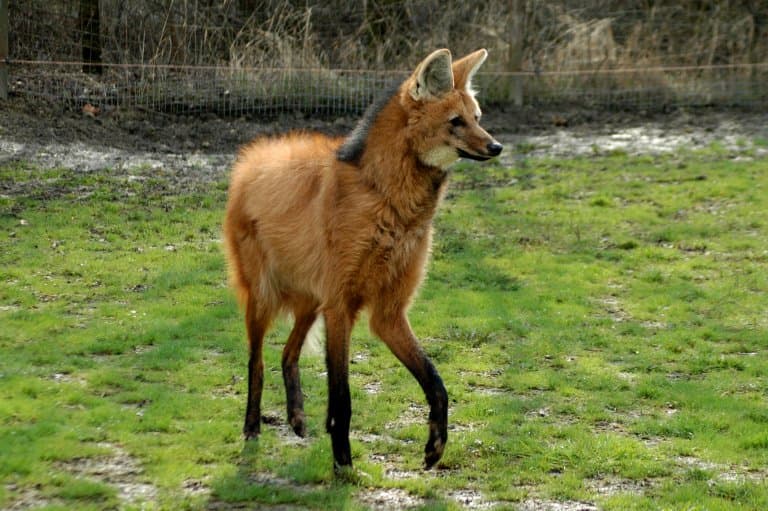 Male maned wolves mark their territory with urine that’s said to be almost as powerful as a skunk’s infamous defence. The urine gets its odour from sulphuric chemicals called hemiterpenoids, which are commonly found in herbs and insect pheromones. 1

The smell has been described as akin to the smell of hops, and herblike.

As the urine ages, the prevalence of certain chemicals increases, suggesting that the urine may carry with it a lot of information useful to its peers. It’s thought that ovulation in females may be induced by a specific pheromone or set of pheromones from the male’s pee, but this still hasn’t been confirmed.

4. They are mostly solitary (or are they?)

There are mixed opinions on the socialisation strategies of maned wolves. They’re thought to be monogamous, and mostly solitary. While they tolerate company occasionally, it’s most often from the opposite sex, and even then, they’re generally found to spend more time alone than with company, even in mating pairs.

However, studies into their behaviour typically involve very small sample sizes, and there is some evidence that they may not be as solitary as previously thought (see below). 2 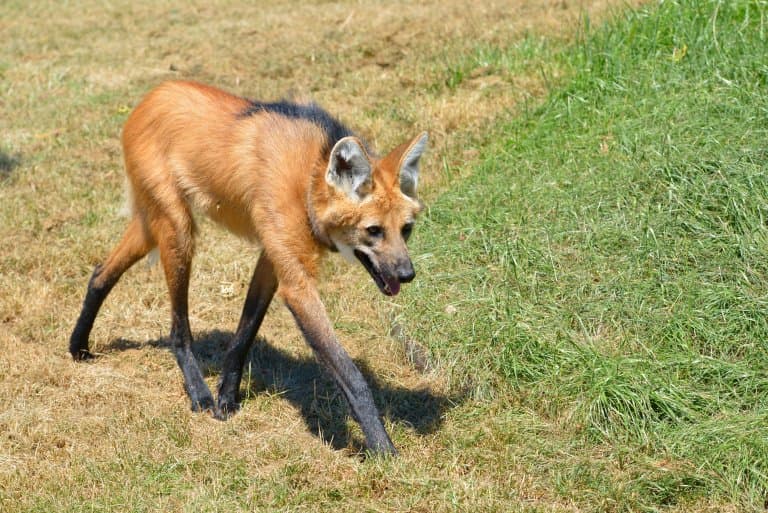 This one may not be a surprise to anyone who’s owned a dog. When maned wolf pups are hungry, they persuade the parents to regurgitate food for them to eat. While this is a well-known feeding strategy in birds, it’s lesser-known that canids adopt this behaviour too, and the maned wolf is no exception.

What’s particularly interesting about this, however, is that when observed closely it was witnessed that males were solicited by their pups much more frequently than females for this service. This may suggest that males have a stronger influence on offspring fitness than previously thought and therefore may not be as solitary as we have assumed.

Instead of howling like its namesakes in the Canis genus, maned wolves commonly express an extended, high-amplitude whine, used to make contact with other wolves. Another common vocalisation is its roar-bark, which is also a long-distance call and serves the opposite purpose: telling other maned wolves to keep away.

These detailed vocalisations have been shown to contain identifying information that other individuals can use to recognise and tell one caller from another. 3 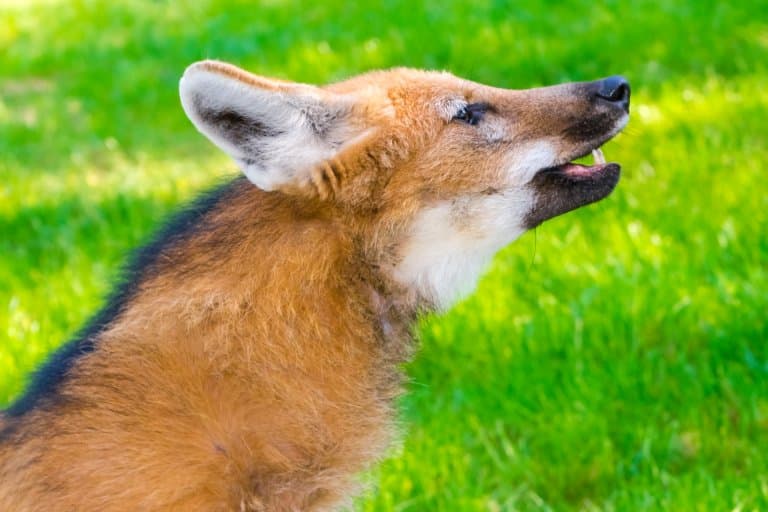 7. They eat their vegetables

Maned wolves don’t need as much animal protein as other canids, and have a diet that can be up to 50% plant matter! In fact, they have been commonly fed soy-based pellets in captivity with great success in terms of visual health metrics.

8. They diet on wet birds, dry mammals and custard apples

There aren’t a lot of soy-based meat alternatives in the wild, so wild wolves focus more on animal sources for their protein.

In the wet season, they prefer birds, with a side of custard apple and cactus. In the dry season, they eat small mammals such as rabbits and an accompaniment of the aptly-named Solanum lycocarpum, or wolf apple.

Any time of the year though, they seem to love eating dung beetles.

9. Most of what we know of wild maned wolves comes from their poop

You may be wondering how we know what they eat when they’re so elusive and we rarely get a chance to see them feeding. While we can’t reliably witness what goes into a maned wolf, we can pay close attention to what comes out of one.

In fact, we can learn a lot from their poop. As well as assessing their dietary preferences, methods such as faecal steroid monitoring gives scientists a measure of hormones and other interesting body chemicals at different times of the mating season.

Poop-sniffing dogs are also used to find maned wolf scat and give an idea of population counts and habitat range.

10. They take time off during the full moon

Maned wolves have been shown to reduce their activity during fill moons. It’s thought that this is a response to the lack of available prey during peak luminous periods of the lunar cycle.

Essentially, it’s so bright during full moons, that prey animals tend to sit it out and wait for safer times to feed. This means there’s not so much for the maned wolf to find and eat. And so, they kick back too. 4 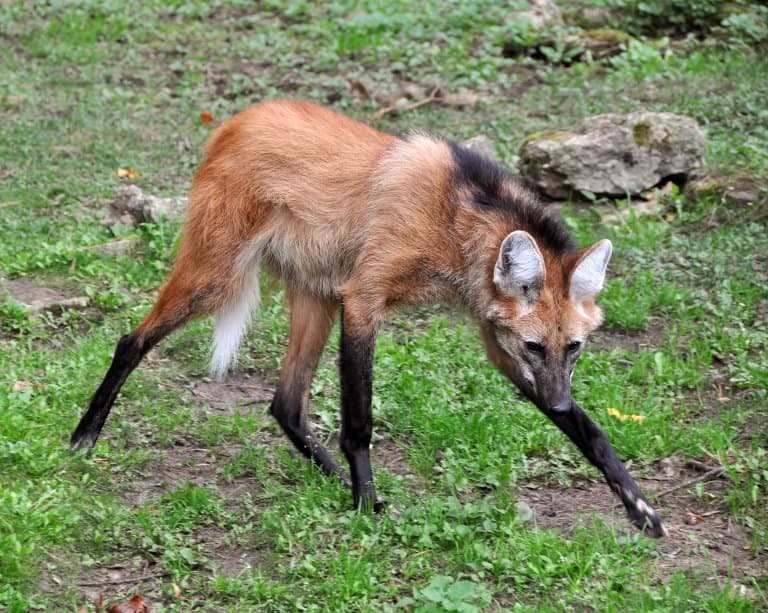 11. They live in harmony with other fake foxes

Maned wolves share their habitats with both the crab-eating fox and the hoary fox, neither of which are true foxes. This niche overlap is usually cause for a squabble, and it’s usually thought that the three animals manage to avoid competition by selecting different prey items.

However, going back to the poop, it’s clear that there is substantial overlap in their dietary preferences too. So, either these three carnivores compete in secrecy or there is some other mystery as to how they coexist without fighting.

The habitat of the maned wolf is rapidly diminishing. Already possibly extinct in Uruguay, the species itself is threatened not just by a reducing population, but by a decrease in genetic flow.

What this means is that the breaking up of its habitat prevents the maned wolf from finding genetically diverse mating options, resulting in a reduced genetic diversity, and a higher vulnerability to genetic defects and disease.

Habitat fragmentation is a huge problem in conservation, and with increasing demand for animal feed for Western agriculture, grasslands and forests in South America are being burned down to grow soy crops for Western livestock. The Cerrado in Brazil, one of the major maned wolf habitats, is the centre for some of the largest soy exporters that have been linked to numerous UK supermarket animal products.

Therefore, the simplest way any of us can affect the success of the maned wolf is to research and change any of our eating habits that may contribute to the destruction of its habitat. 5 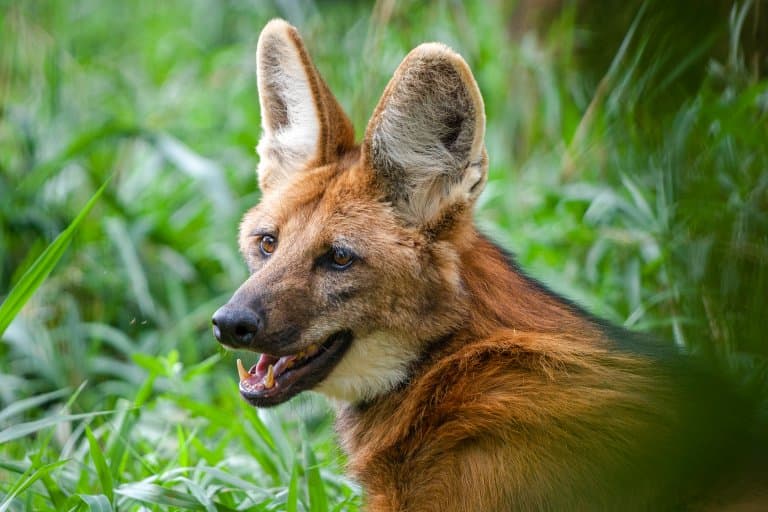