Skunks have a large range in the world and can be found in Canada, the USA, South America and Mexico.

Skunks used to be classified with the Mustelidae family of weasels, polecats, ferrets and related animals. Although some taxonomies still classify them in this way, more recent genetic evidence shows that they aren’t as closely related to mustelids as previously thought.

Their closest living relatives are stink badgers, who more recently were found to belong to the skunk family, are found in Indonesia and the Philippines.

Skunks have fairly stocky, muscular bodies with relatively short legs. They have long noses and well developed claws. Their dense fur extends across their whole bodies and tails and they are well known for their striking fur colouration and patterning,

The distinctive fur of skunks can range from black/white to brown/white and even to grey and cream. It has bold striped or spotted patterning and is the first signal to would be predators that this isn’t an animal to mess with.

There are 10 living species of skunk today and their size can vary greatly. One of the smaller species is the pygmy spotted skunk, which grows to between 10-35cm, and the largest of the species is the hog-nosed skunk which can grow up to nearly a 1m in length.

Skunks like to sleep in burrows during the day and often take up residence in one that has been previously occupied, although they can dig them out themselves. Skunks inhabit many different terrains, ranging from more open forests to rocky landscapes and even land that is used for agriculture. Some of the stink badger species have even been found in caves.

Skunks are omnivores and will eat insects, worms, grubs, rodents, leaves, berries and fruit dependeing on food availability of the seasons. They will also eat garbage left by humans!

1. Skunks can spray their foul smelling liquid up to 3m

Some species can spray this up to 3m away. Skunks often aim the liquid towards the eyes of its predator and can even rotate their body into a ‘U’ shape so they can aim and keep an eye on their threat at the same time.

Their foul spray is enough to ward off large predators such as bears, but interestingly owls are still able to prey on skunks, as they lack a sense of smell. 1

Skunks carry enough of the liquid for 5-6 successive sprays. They need 10 days to produce another supply.

3. Their spray is highly flammable

Thiols makes their liquid highly flammable. So don’t light a match if you’ve been sprayed! 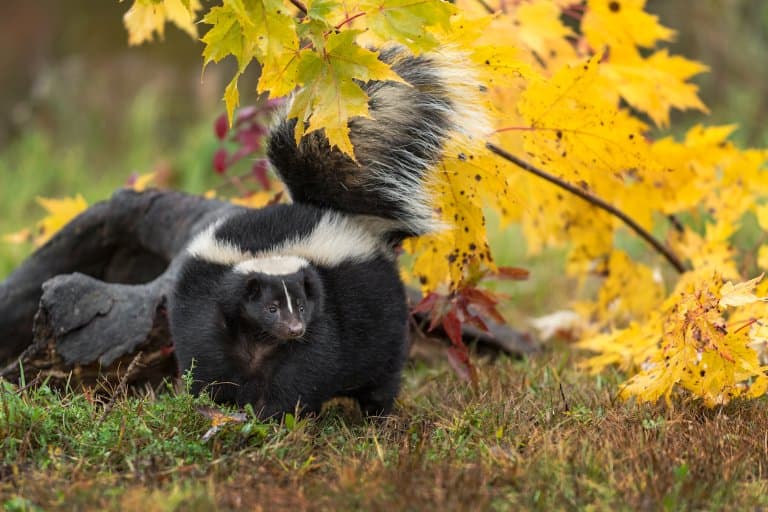 Skunks have poor eyesight, which make them vulnerable to road traffic. Although skunks do not have a great eyesight, their sense of smell and hearing are extremely acute.

They use their well-developed sense of smell when searching for food, especially when rooting around in the earth and their strong hearing system comes in handy when listening out for predators. 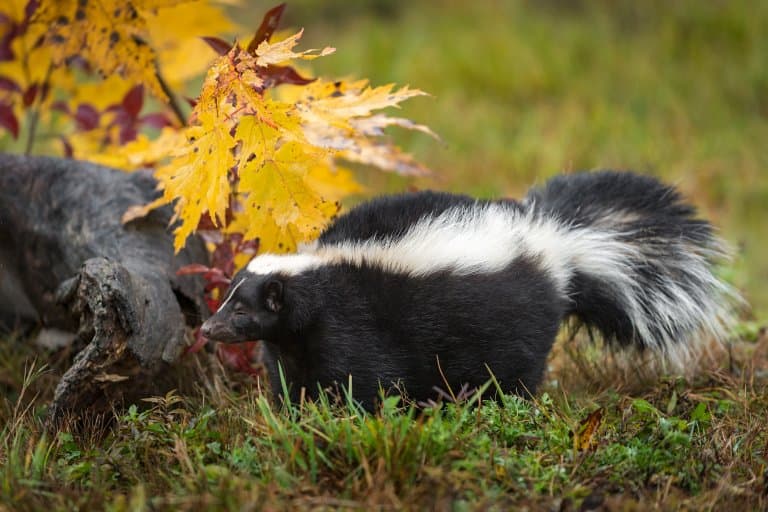 Some species of spotted skunk, such as the eastern spotted skunk, are agile enough to climb trees. They use this skill well to avoid danger or to find different food stuffs.

6. Skunks are one of the main carriers of rabies

In some of the areas that skunks inhabit, they have been found to be one of the main animals that can carry rabies. They are not the only ones. Other common vectors for rabies in similar areas are bats, racoons and foxes.

It has been observed in some species of skunk that when threatened, they will stand on their front paws in a handstand like position to help ward their foe off.

They can also make grunting noises and stomp their feet to add to their defences.

8. Skunks aren’t precious about their territories

Skunks generally aren’t aggressive towards each other and they do not mark their territories.

Male home ranges can overlap and can be partly shared. Sometimes males become a bit more defensive during the mating seasons.

9. Baby skunks are known as ‘kits’

Skunks mate in early spring, before giving birth around May for a litter between 4-7 kits. 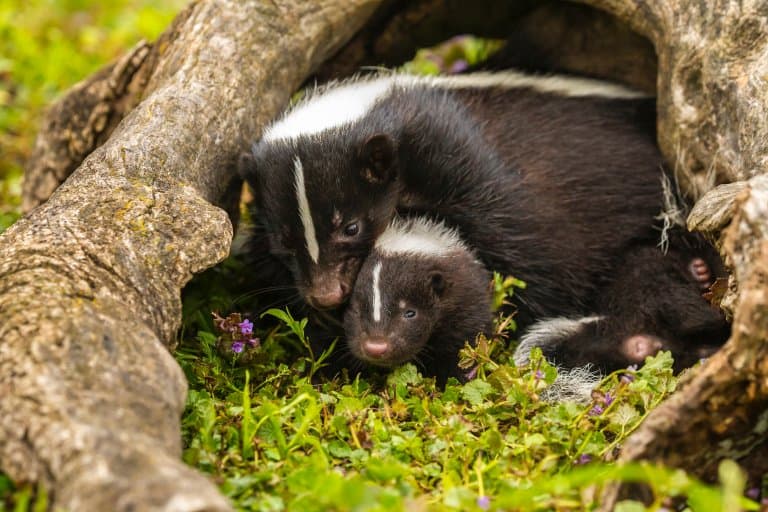 10. Young are vulnerable when born

When skunks are born they do not have any fur and their eyes are still shut.

They can be born in groups of 2-10 individuals (depending on the species) and will be weaned after around 2 months. Because they cannot use their skink glands straight away they rely solely on their mothers to safeguard them.

11. Some species can delay the birth of their young

In some species of skunk, after mating, they can delay the implantation of the fertilised egg in the uterus.

This can be delayed until environmental conditions are most favourable to help give the young the best chance of survival.

Skunks are nocturnal and will escape the heat of the day, if necessary, by sleeping in burrows.

They will then forage for food at night. Although skunks do not go into a deep hibernation, if the climate they are in is more seasonal, they will stay in their dens during the colder months, often in groups to help keep warm.

13. There was thought to be a fifth species of hog-nosed skunk

This is now classified as the American hog-nosed skunk, Conepatus leuconotus.

14. They can eat honey bees

Skunks do like to eat insects and included in this are honey bees. They are the primary predator of bees, and use their thick fur to protect themselves from being stung.

When they discover a hive, skunks will often repeatedly visit it to extract the bees, scratching on the hives to encourage the bees to emerge.

Skunks are mainly solitary and like to search for their food alone, although they can inhabit the same den/burrow for warmth. Males generally do not like to share burrows with other males.

16. A group of skunks are called a ‘surfeit’

While they are typically by themselves, they do gather to mate and look after their young. 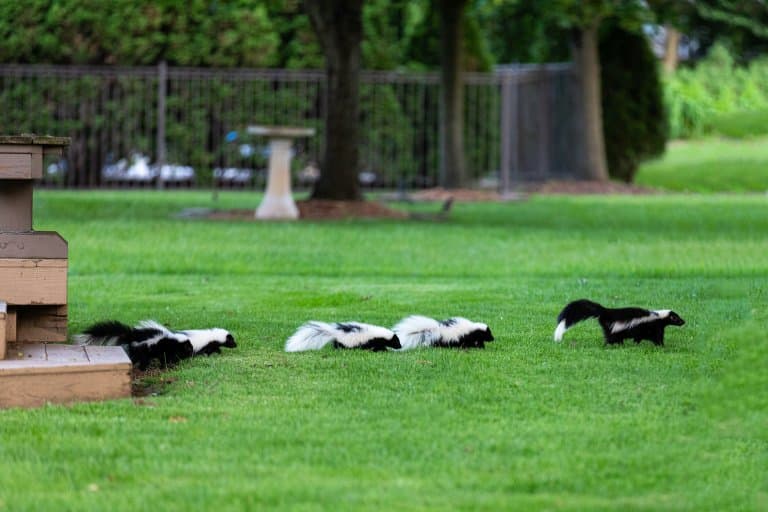 17. Skunks can be beneficial to humans

Although skunks don’t always have the best reputation, they actually eat some species of insect and rodents that can be a pest to crops and the agricultural industry as a whole.

Some of the smaller species, like the spotted skunk can be particularly efficient at this. 2

18. Skunks only live for a year in the wild on average

Skunks are short-lived in the wild and have a high mortality rate, often not surviving the first year due to weather, disease, predators, parasites or road death.

However, studies have shown they can live up to 7 years in the wild, or 10 years in captivity.
3

19. Tomato juice does not neutralize the skunks odour

Skunks can be common in urban areas and have encounters with dogs. Therefore, there are lots of misconceptions around the removal of skunk odour from domestic dogs.

The Humane Society of the US recommend removing the odour from dogs by using a mixture of diluted hydrogen peroxide, baking soda, and dishwashing liquid.