The mandrill is a large Old-World monkey, most recognized by the striking blue and red skin on its face and rump. Their heads are large, relative to their bodies, and the skin on their face is ridged.

They are found predominantly in western and central parts of Africa, residing in rainforests and, occasionally, savannahs. The largest population is found in Gabon, a country located on the west coast of Africa. 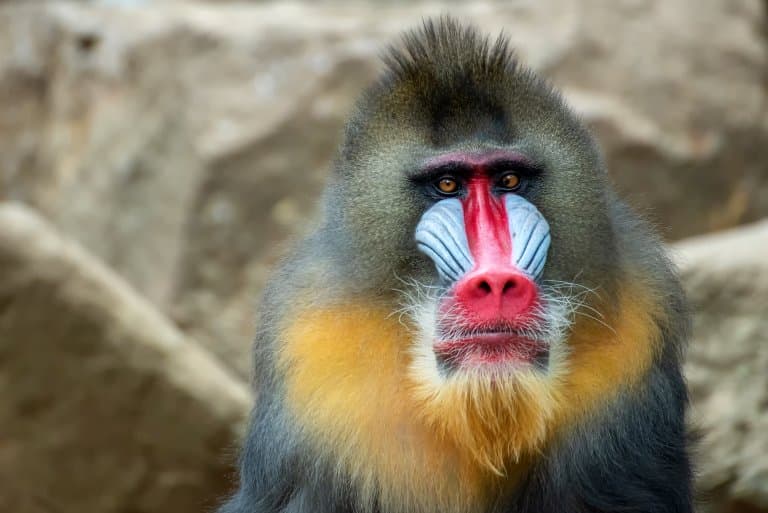 As social creatures, they live in groups, called ‘hordes’, which are often led by an alpha male and made up of 10 to 12 females. Female-exclusive groups also exist, some of which include hundreds of primates.

Mandrill are most active during the day, and spend most of their time on the ground. They are omnivores and diet on fruit, seeds, leaves and roots, but will also eat eggs, birds small mammals, reptiles and insects.

In some areas, mandrills are hunted as bushmeat and consumed. They are considered, by some, a rare delicacy.

Unfortunately, due to an expanding human presence (agricultural and settlement), their habitats are diminishing each year. Because of their decreasing numbers, the IUCN has categorized them as a vulnerable species.

1. Mandrills are the largest monkey in the world

They are not only the most colorful but also the largest, species of monkey on the planet. In general, males are much larger than females. 1 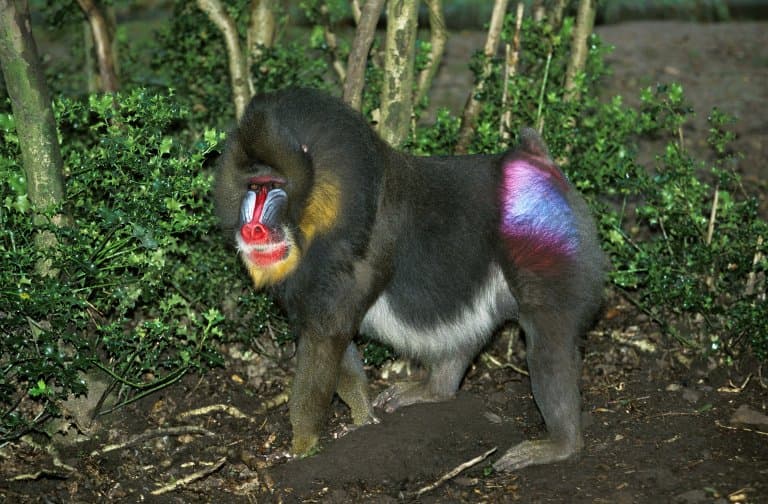 2. ‘Mandrill’ is derived from ‘Man’ and ‘Drill’, the latter meaning baboon

‘Drill’ means ‘baboon’ or ‘ape’ and is West African in origin.

3. Their face coloration is from blood vessels and collagen fibers

The red line running down the middle of their face are red blood vessels, while the blue, grooved skin either side are parallel arrangements of collagen fibers supported by ridged bone.

This helps them stand out, and is thought mandrills with more vibrant colours tend to have more dominance and success mating. 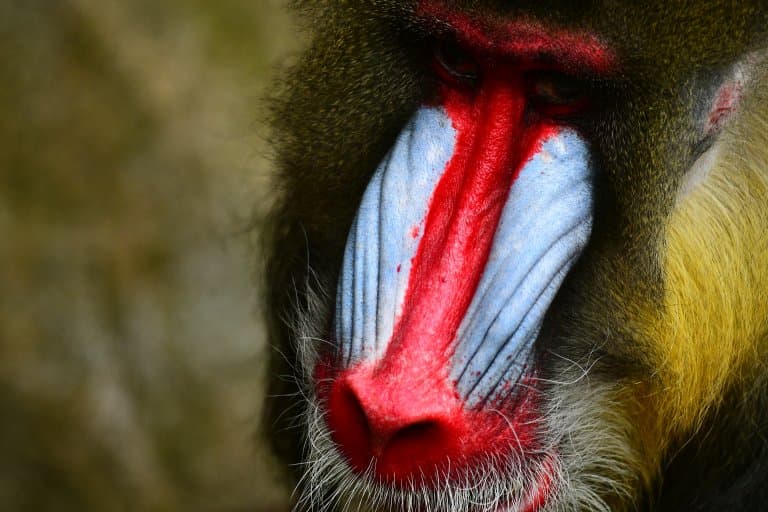 4. Some mandrill hordes were found to have over 1,000 members

One study found 1,350 mandrill that crossed a road together!

Another study performed at Lopé National Park, Gabon found that supergroups of Mandrill had on average 620 members. 2

5. Females are not as vividly colored as their male counterparts

When excited, the colored patches of skin will become brighter for both male and female mandrills, especially when they are in heat. However, relative to males, females are duller in color.

6. They have extremely long canine teeth

For hunting and defense, mandrills use their long canines to tear flesh apart. In males, canine teeth can grow to be over two inches long.

While they may appear threatening, mandrills have been seen “grinning” at each other, exposing their teeth in a friendly display. 3 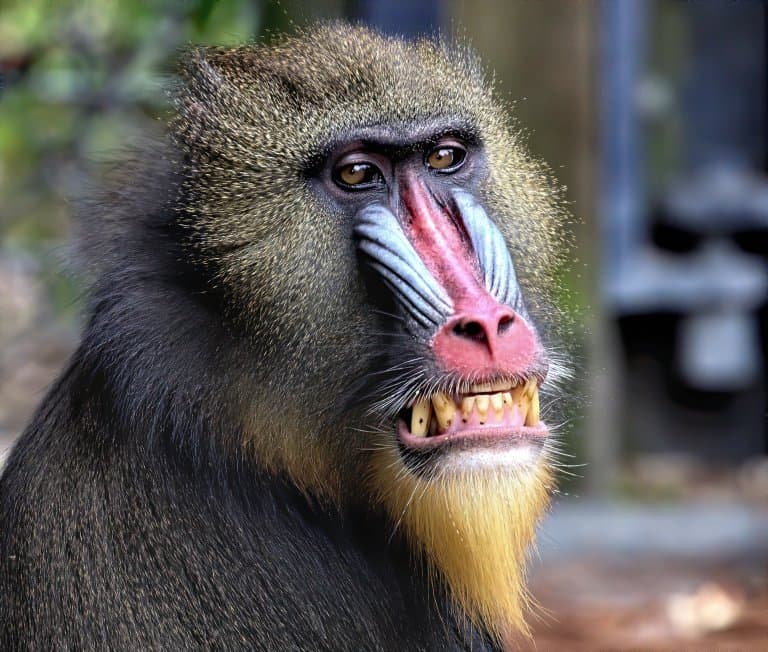 7. Special pouches in their mouths allow them to store food for later

Mandrills have large cheeks that can be used to carry food around like a hamster. They will store food in these cheek pouches until it is safe for them to consume it.

8. Young mandrills will stay with their mothers for as long as possible

After birth, infants hang onto their mothers’ bellies for safety. They will usually stay with their mothers until the next infant is born. 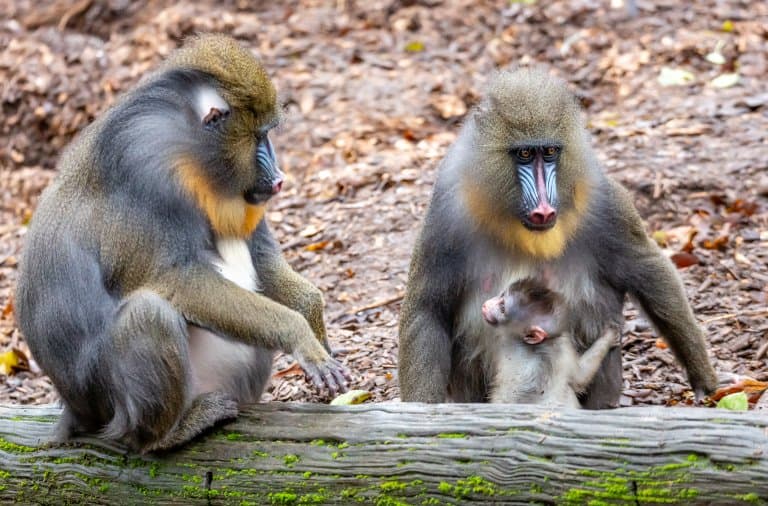 Mandrills have an impressive repertoire of vocalizations. They will employ a variety of screams, grunts, and chitters to communicate with others.

Both males and females have glands on their chest that produce multifunctional secretions.

Males will use these secretions on trees to demarcate territory while female secretions serve as an indicator of their sex, age, and readiness to mate.

11. Grooming is a way for mandrills to bond

Like other monkey species, mandrills are often seen grooming each other to remove fleas.

There is a deeper significance as grooming is also a social behavior used to establish meaningful bonds and maintain hierarchies.

12. Infants are not born with colored faces

At birth, infants have pink or brown colored faces. As they develop and grow, more and more colors appear. Between the ages of four to seven is usually when a mandrill reaches sexual maturity.

13. They used to belong to the same genus as baboons

The mandrill was priorly classified as a part of the Papio genus that encompasses baboons.

Later on, it was discovered that mandrils are genetically distinct and evolved earlier on. Today, they belong to their own genus, Mandrillus. Their closest relative is the drill, another old-world primate.

14. Compared to other monkeys, they spend less time up in trees

The forearms and hindlimbs of mandrills are almost equal in length.

For the most part, they will walk on all fours on the ground, though, they have been observed climbing trees for food and sleep their at night for safety. 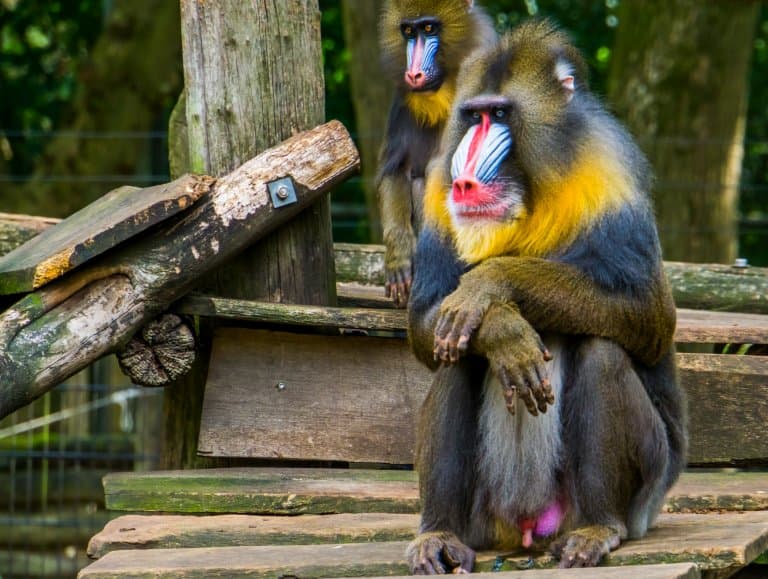 15. A male mandrill’s coloration is an indicator of his sexual fitness

One can determine how dominant a male mandrill is based on the vibrancy of the coloration on his face and buttocks. The more testosterone a male has, the brighter this coloration will be.

Dominant males can fall in rank when overpowered by a stronger rival. When this occurs, their coloration will fade, indicating to members of the troop that they are no longer the head honcho.

16. Gestation lasts for approximately half a year

Gestation can range between 179 to 182 days, after which mothers will give birth to one or, rarely, two offspring.

Like all primates, they have fingernails rather than claws. Take a look at how similar they are! 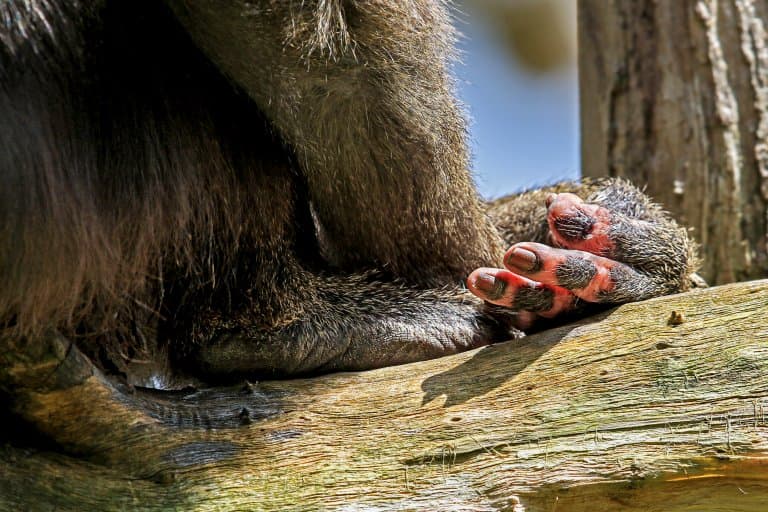 18. Sick troop members may be recognized based on their poop

This is done as a preventative measure so that mandrills can avoid grooming infected troop members and lower the risk of becoming sick themselves. 4

19. Their numbers have drastically declined over the past few decades

It is estimated that mandrill numbers have decreased by approximately 30 percent since 1978.

This decline has largely been due to hunting and deforestation.

The mandrill is listed by CITES, banning commercial trade in wild-caught specimens and by the African Convention which provides them protection but does allow special authorization for their killing, capturing or collecting.