There is a small genus of rather strange-looking rotund floaty vegetarians bouncing about in the shallows of the tropics.

They’re called the manatees and often referred to as ‘sea cows’. They’re not like many animals around today; they share an unusual lineage and have some bizarre relationships. 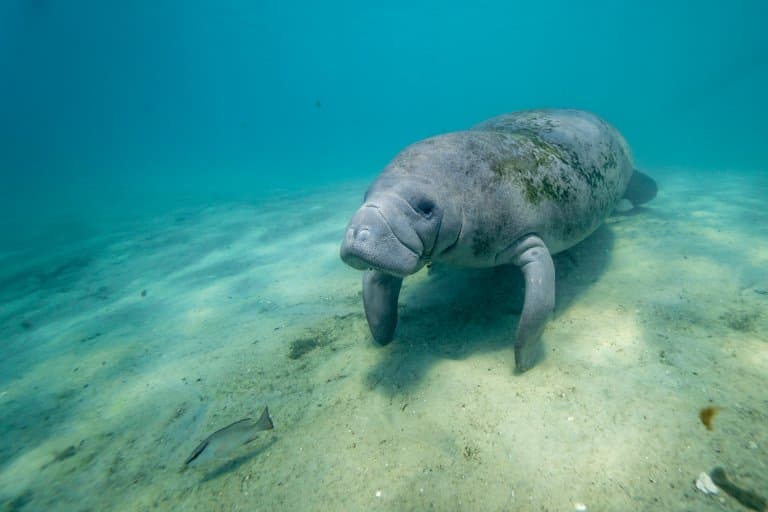 Manatees are a group of three species in the order Sirenia, growing quite large and peacefully grazing on plants in the shallows of African, Central American, and Caribbean deltas.

Their are 3 living species of Manatee; the Amazonian manatee, West Indian manatee and West African manatee.

Manatee are generally solitary animals, although mothers will nurse their young. They like to diet on over 60 different types of plants, sea grasses and algae on the ocean floor. They eat around 10% of their body weight in plants each day.

Manatee are the oceans largest herbivores measuring up to 15ft in length and 1,775kg in weight. They are slow moving creatures and spend up to 50% of their time submerged asleep. They surface every 3-5mins to breathe, but can hold their breath for up to 20mins.

They’re often confused with dugongs and with the one remaining species of sea cow, though they are a different genus. They have coarse whiskers and stubbly hair and can be pretty smart, too.

While manatee have no natural predators in the wild, all three species of manatee are listed as vulnerable to extinction, due to threats from habitat destruction and ship strikes from humans.

1. Sailors found them too cute

The order Sirenia, which includes both manatees and dugongs, is named after the Greek legend of the sirens, who were a group of mean monsters who lured sailors onto the rocks with their enchanting songs.

It’s thought that mermaid legends come from a similar root, and that manatees and dugongs may have been the inspiration for the half-fish half-woman creatures reported by lonely sailors. This may suggest that anything becomes cute when you spend long enough at sea. 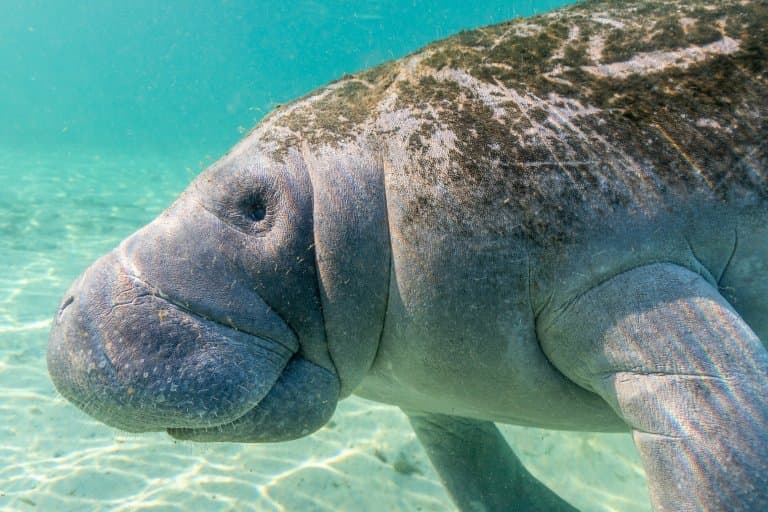 2. They use farts for flotation

Manatees are mammals, so, unlike bony fish, they don’t have a swim bladder. And unlike sharks, they don’t have a fatty liver or cartilaginous bones. All of these adaptations in other animals tend to function as buoyancy regulators; helping the animal move up and down in the water at will.

Still, manatees have come up with a clever way of regulating how well they float or sink: their gas.

When they want to float, they hold in their farts. To sink, they let them out.

This somewhat dubious claim has been confirmed in a journal post, along with the note that when they get constipated, they sort of float around aimlessly like fart balloons and have in the past needed laxatives to restore buoyancy control. 1

Manatees are in a weird clade of mammals called Paenungulata that includes a small African animal much like a rodent, called a hyrax. There aren’t many other animals in this clade, but they show some pretty amazing diversity.

Hyraxes are cute fuzzy things that calmly occupy rocky outcrops in the savannah during the day or make horrifying ghost-ship screams from trees at night. They’re not remotely like manatees, who hardly ever climb trees at all. Yet, DNA analysis has confirmed that they’re related.

4. Oh, and they’re related to elephants!

Oh, and the other animal in this clade is the elephant.

So, you’ve got a real group of misfits in Paenungulata, who have somehow survived extinction. Manatees, like hyraxes and elephants, also have fingernails, and they even have a prehensile upper lip, making their faces a little elephant-like, if you squint a bit.

5. They’re not quite a dugong

Lots of people use the terms manatee, sea cow and dugong interchangeably but in fact, these are different animals. They do look alike, and they are somewhat related, but manatees are from the genus Trichechus.

To tell them apart easily, look at the tail – in manatees, it’s rounded like a pizza paddle. 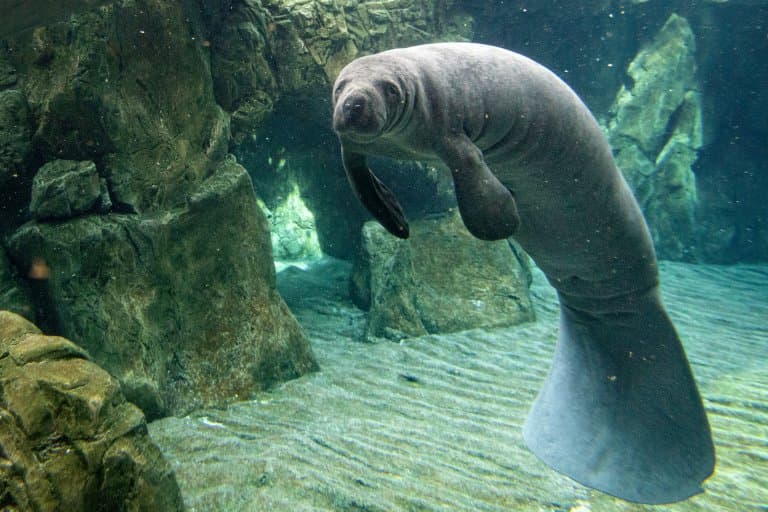 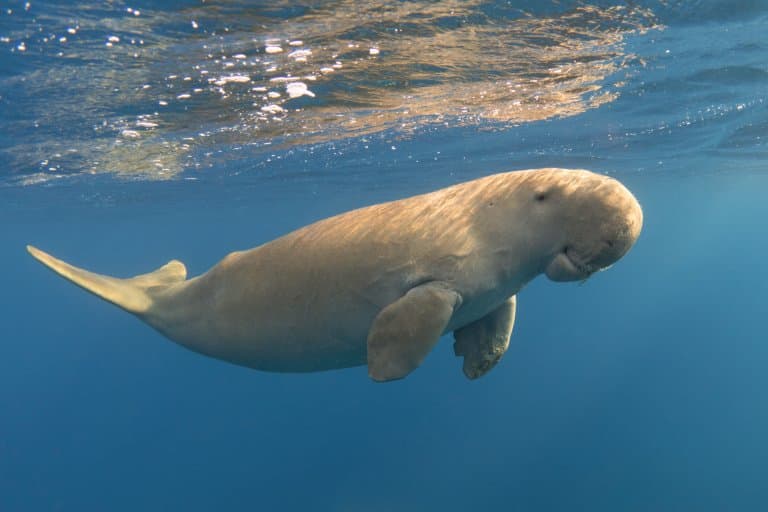 6. They may be as smart as a dolphin

Manatees have a very low body size to brain ratio. This is typically considered a sign of a dumb animal, but there are exceptions. Manatees might have grown large to maintain their body temperatures more effectively in changing waters. It does appear that they’re as good at solving problems as a dolphin in tests.

It’s worth pointing out that ‘intelligence’ is a bit of a dirty word in behavioural science, since it’s impossible to quantify and there are loads of ways in which an organism can be intelligent. Still, it’s becoming apparent that manatees aren’t as mindless as they look. 2

Squeaks and Squeals are commonly heard from manatees, and sometimes chirps and grunts.

They communicate with one another through a range of vocalizations. These calls are structurally complex, which means they’re adjusted depending on context and contain context-dependent information.

The cool thing about being fat underwater is that you don’t have to carry all your weight. Manatees, despite being blubbery torpedoes, can walk along the seabed gracefully on their tiptoes. 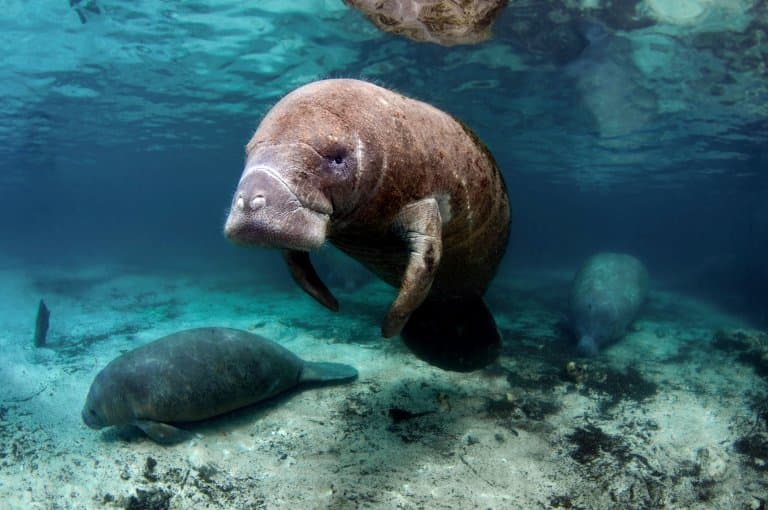 9. Manatees teeth are are continuously replaced

Humans have baby teeth, and adult teeth. If you lose adult teeth, they don’t go grow back!

However, manatee (like elephants) continously replace their teeth throughout their lives.

10. Manatee comes from a Carib word

The manatee name comes from ‘manati’, a Carib word meaning ‘breast’ or ‘udder’, referring to the breasts of female manatee.

11. They’re at risk of collapse

Manatees in Florida are classified as ‘vulnerable’, with low genetic diversity.

Genetic diversity is just as important as population size in conservation. Often, despite there being both male and female animals in a population, there simply aren’t enough genes to spread out in a viable way. This means the individuals are too closely-related to create healthy offspring and negative, or “deleterious”, mutations in the DNA of the offspring appear more often.

This makes genetic diversity critical to preserving the species, and with such variable population numbers over the course of the year, and random events such as disease and oil spills affecting their demographics, manatees may be at risk of becoming unviable as a population in many areas.

12. They ingest a lot of plastic

Unfortunately manatees suffer a lot from plastic ingestion, and have died on numerous occasions from it.

Plastic waste in the oceans is a real killer of innumerable ocean species, and manatees seem to suffer a lot from it.

Again, this is a sad one. These slow-moving, gentle and curious sea sausages regularly get minced up by boats passing over them. Propellor scars are common along their backs, and these interactions can also often be fatal.

In Florida, 25% of recorded manatee deaths are attributed to boat collisions and as such it’s important to reduce the speeds of boats in the area; something which has been demonstrated to give manatees a lot longer to react to passing threats, as well as reduce damage in the event of a collision. 3