The dugong is a herbivorous marine mammal sometimes referred to as a ‘sea cow’, and one of four living species that belongs to the order Sirenia.

They graze on underwater grasses and have an adorable, plump appearance, with a dolphin tail, round head and downward snout. 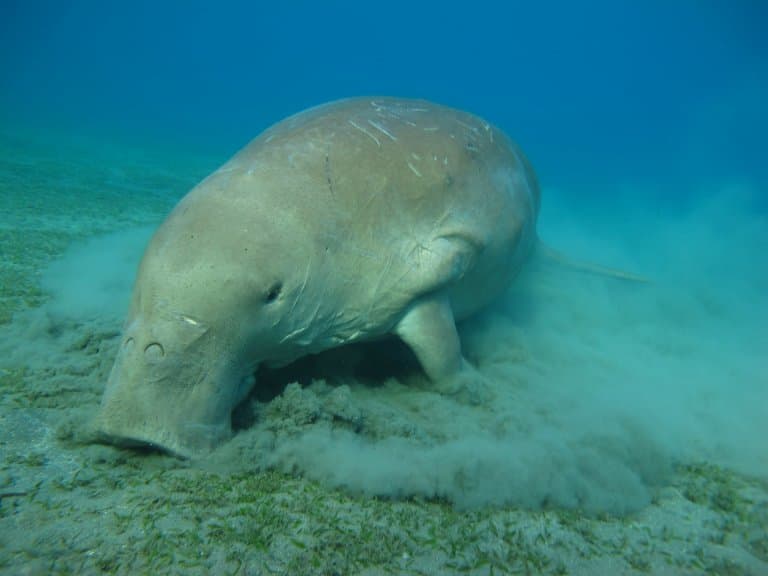 They were first discovered in Australia, which is home to the largest population. Since then, they have also been found in the Persian Gulf, the eastern Red Sea, and in Indian Ocean waters.

Sighted in shallow bays and reefs, dugongs are the only member of the Sirenia order to live exclusively in saltwater environments.

Their forelimbs are paddle-shaped while their tails are fluked. They don’t have a dorsal fin or hind limbs. They diet on seagrass, and migrate to different locations when seagrass is not available.

Dudong’s can live for a long-time, with the oldest dugong to date was documented to have been 73-years old.

Sadly hunting, habitat destruction, and accidental collisions with boats has lead to the depletion of some populations.

1. They once swam through Egypt

According to recent findings, dugongs inhabited waters that flowed over present-day Egypt approximately 40 million years ago. Their ancestors were likely semi-aquatic. 1 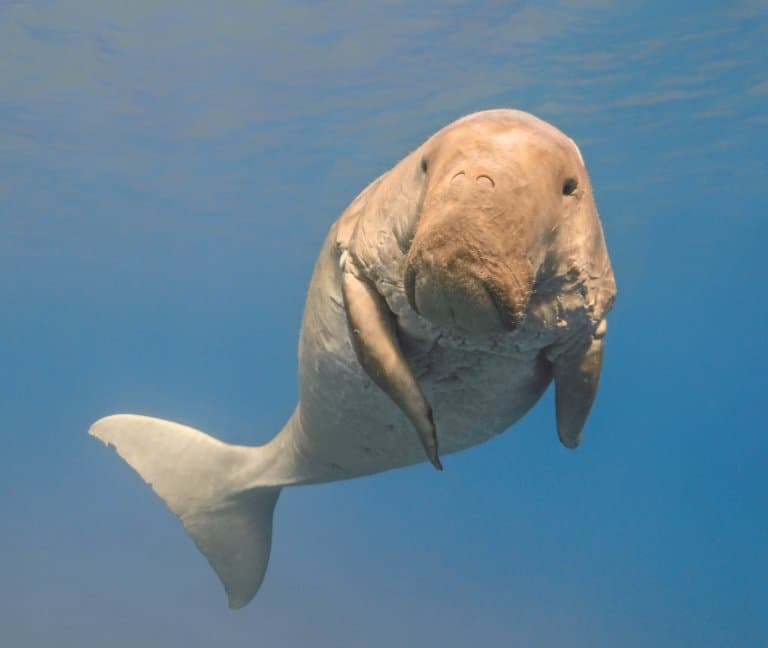 2. They belong to the same order as manatees

Unlike the manatee, dugongs live exclusively in marine habits.

One can quickly distinguish the two based on their tails—manatees possess paddle-shaped tails while the dugong’s is dolphin-like (fluked).

3. Dugongs have been nicknamed “sea cows”

Known to graze on sparse seagrass patches, dugongs are often called  “sea cows”. They prefer grass that is high in nitrogen content and low in fiber, making it easier to break down. Most graze all day.

They are also sometimes called ‘sea pigs’ and ‘sea camels’. 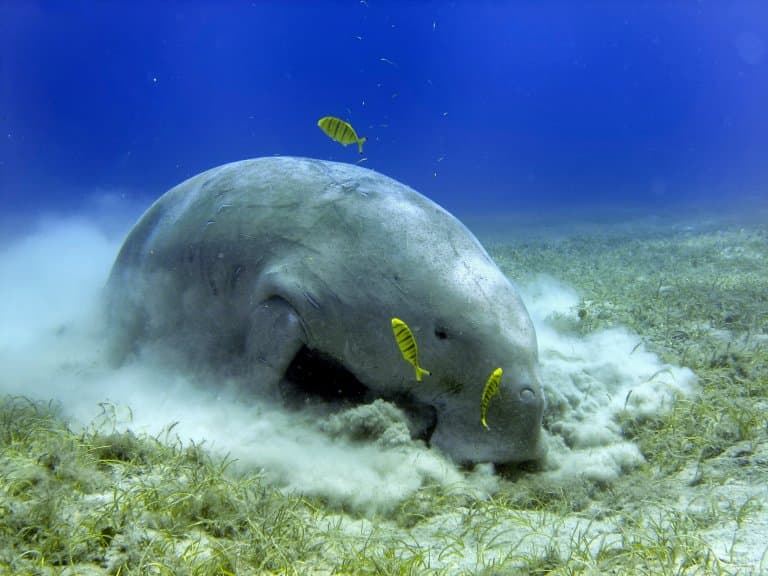 4. They are more closely related to elephants than whales

Protein analyses of dugong eye lenses suggest they share a common ancestor with hyraxes and elephants.

Like elephants, dugongs can also grow tusks. These are found in males as well as older females.

Interestingly, you can estimate a dugong’s age by the number of rings that they have on their tusks, just like a tree!

5. Their brains make up less than 1% of their body weight 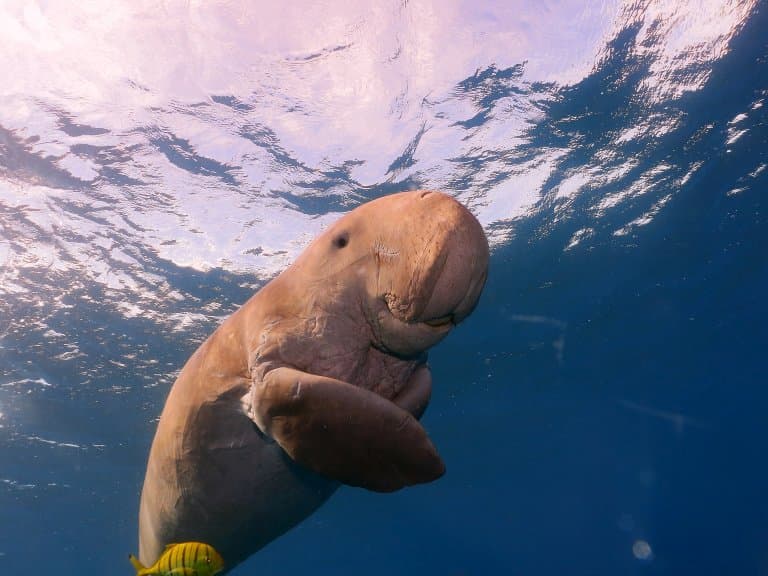 6. In some cultures, they are used for medicinal purposes

7. The dugong matures later than most other marine mammals

It can take eight to eighteen years for a dugong to reach full sexual maturity. This is relatively longer than other marine mammals, such as whales.

Lekking behaviour involves the establishment of areas where multiple males will attempt to mate with a single female. Unfortunately, this can at times lead to injury of the female or the several males involved. 3

9. They appear to always be smiling!

The dugong appear to have a constant smile on their face, making them great for selfies! 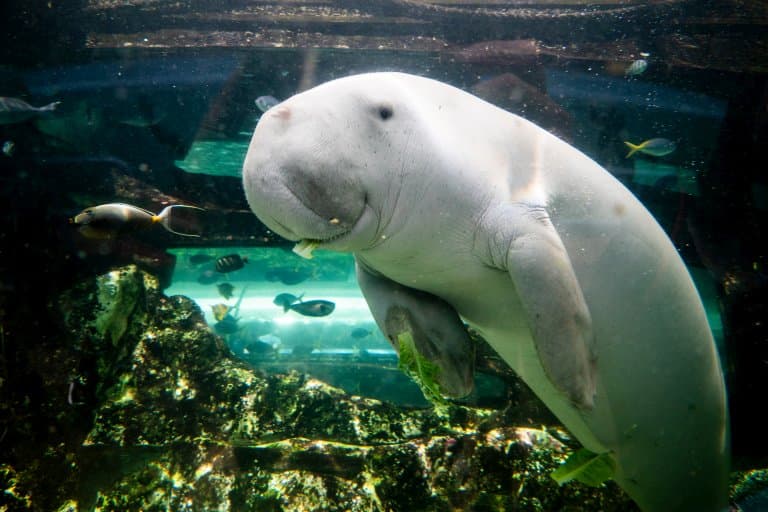 When coming up for a breath of air, dugongs “stand” on their tails to support their heads above water. On average, a dugong can stay underwater for approximately 6 minutes. 4

11. Their gestation periods last over a year

Females carry their young for 13 to 15 months prior to giving birth. Young dugongs (calves) stay with their mothers for approximately 18 months before becoming fully independent. It has also been reported that calves will extend their flippers to their mothers for reassurance. 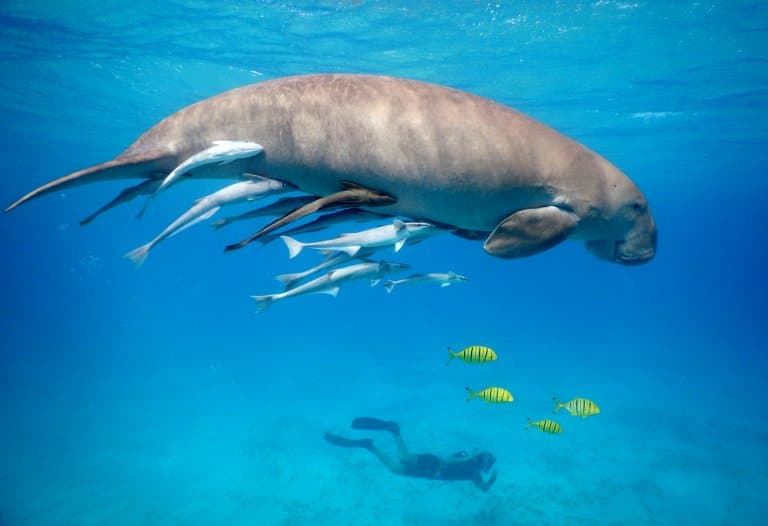 12. They have poor eyesight, but excellent hearing

Living in shallow waters that are often well illuminated, dugongs do not depend greatly on their eyes. Rather, they have been found to communicate using sounds of varying amplitudes and frequencies. These include chirps, barks, and whistles.

Their skin may appear sleek, but it is actually covered in thin hairs that are thought to contribute to their tactile senses. These hairs are most concentrated around their mouths. 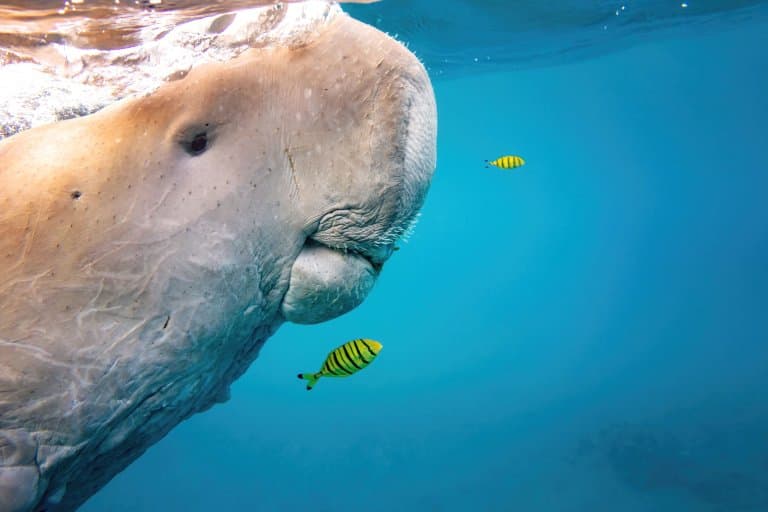 Though they are social animals that have been found in herds, dugongs are more often found alone or in pairs (usually a mother and her calf).

This may be due to their feeding patterns and distribution of food sources.

15. They can hold their breath for over 10mins

Dugong’s need to breath in oxygen from the surface, and then they are able to hold their breaths for up to 11mins at a time and can dive as deep as 33 meters to feed on the sea bed. 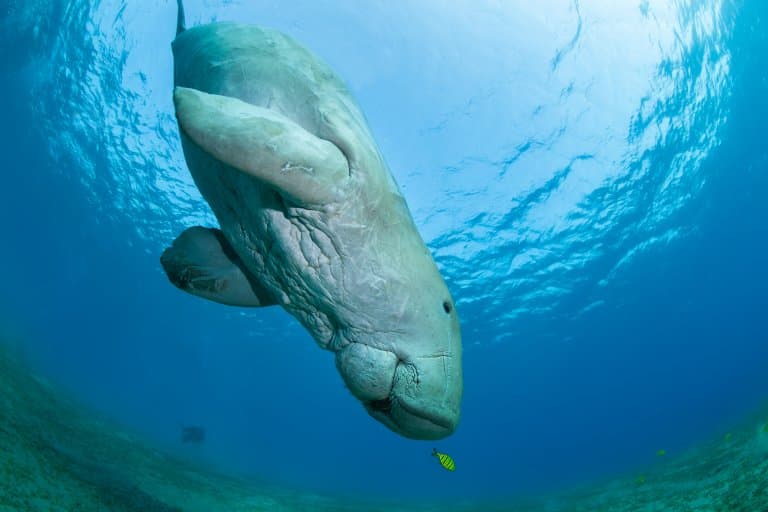 16. They may have been the inspiration for mermaid legends

Mermaids were described by Christopher Columbus as being “not so beautiful as they are said to be, for their faces had some masculine traits”.

It has been proposed that he may have been describing dugongs.

17. They are vulnerable to extinction

In the last 30 years it is estimated that dugong populations has declined 90%.

The dugong has been hunted by natives around the Pacific Islands for many years for their meat, oil and bones.

While trade of Dugong parts is banned in many countries, the species is vulnerable to extinction and numbers have declined due to hunting, fishing (a by-product of being caught in fishing nets), habitat degradation and a slow rate or production.

Their are various conservation efforts in place and preservation zones established around Australia where 80,000 dugong’s are thought to live, that restrict natives from hunting.