Irukandji jellyfish are a very small, transparent cubozoan jellyfish found in the waters across Australia’s Northern and Eastern coast. They are the smallest jellyfish in the world – yet have some of the most potent venom.

What makes them particularly dangerous is their relatively small size. Being on average only 2.5cm in length, they are hard to detect in the waters that they reside in and can also easily slip through nets put in place to protect people. Although their tentacles can grow up to a metre plus in length, these and their bell shaped bodies are clear, which makes them even more difficult to spot.

They are covered in thousands of stinging cells across their tentacles. This is similar for most jellyfish, however what is more unusual is that the Irukandji jellyfish has these stinging cells all over their bell too, around 5,000 per cm2.

If they fire their venomous stingers into a human, they can cause a severe medical condition known as Irukandji syndrome, which can be fatal. 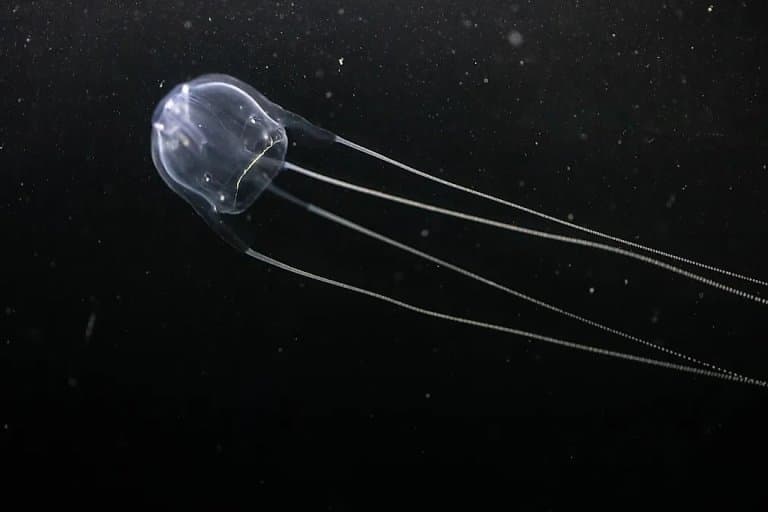 The Irukandji jellyfish mainly prefer warmer waters offshore and have been observed at depths between 10-20m. This however isn’t always the case and they have been seen nearer the surface and at shallower depths, mainly because of water currents washing them in. Where they reside can also be influenced by amount of sunlight, water temperature, rainfall, and percentage salinity.

Cubozoan jellys are known as box jellyfish, due to their box-like shaped body.

The tentacles of the adult Irukandji jellyfish wave around in the oceans currents which in turn helps them to entrap fish as their prey. The stinging cells on them, known as nematocysts, act like harpoons and pierce the fish’s skin at the slightest touch and with great speed, subsequently injecting the venom/toxin. Once the prey is dead, the tentacles then help move it to the bell to be consumed.

Carukia barnesi is the species most often given the common name Irukandji and was the first known species to cause Irukandji syndrome.

In the 1950s and 1960s research was carried out to find out what caused the symptoms of this syndrome, with a man called Jack Barnes letting the Carukia barnesi sting him and see what happened. He became seriously ill, but did survive and this jellyfish was named after him.

1. They really are tiny

To put it into perspective, they are about the size of a fingernail, and would be impossible to see in the sea water. There are two Irukandji jellyfish in the small bottle below.

2. The Irukandji jellyfish is named after an Aboriginal tribe

A doctor who first described the symptoms of the syndrome caused by these jellyfish named it after an Aboriginal tribe; the Irukandji people, located in Cairns in Northern Queensland in Australia where the syndrome was first recorded.

3. The bands on their tentacles help them do some fishing

With the way their bodies move in the water, the bands of nematocysts on the tentacles can sometimes look like small invertebrates swimming.

With twitches of their tentacles, the Irukandji can lure prey in, which are predating on the small invertebrates. They are then stung and paralysed very quickly and digested by the jellyfish.

4. They can fire stingers

Irukandji jellyfish have the ability to fire stingers from the tips of their tentacles and inject venom.

5. Their sting doesn’t feel too bad, but later symptoms can be fatal

The actual sting from this type of jellyfish apparently doesn’t actually feel too bad, possibly around the same intensity as a bee sting.

However it is the symptoms that begin between 10-40 minutes after the initial sting that can be potentially life threatening.

These can vary from cramping and vomiting to cardiac issues, which can lead to death. Some people say it is also linked to a feeling of ‘impending doom’.

6. It is not just one species that causes Irukandji syndrome

Only Carukia barnesi and Malo kingi have so far been proven to cause Irukandji syndrome, it is believed this condition is actually produced by a number of the species including but not limited to Alatina mordens, Malo maxima, Carybdea alata, Carybdea xaymacana, and Carybdea rastonii. 1

Symptons usually slow down within a day, but can last for 2 weeks!

Only two people are reported to have died from Irukandji stings, and when properly treated they are generally quite manageable. However, it’s suspected Irukandji deaths are much higher in reality than just two, as they are often misdiagnosed.

8. As the jellyfish matures, its diet changes

When the jellyfish is in the polyp stage it filter feeds on zooplankton.

As they get bigger and more mature they then use their tentacles to capture their food, which can even include small vertebrates, such as fish.

9. Each individual jellyfish is either male or female

Most species of jellyfish are hermaphroditic with both male and female parts and able to release both eggs and sperm into the water, or self-fertilize.

They reproduce by releasing either sperm or eggs into the water (depending on the sex of the jellyfish). Many Irukandji do this at the same time to increase the chances of egg fertilisation.

If fertilisation occurs the egg will grow into a larva called a planula. This then attaches itself to something like a rock to keep it anchored and is known as a polyp. This then grows and buds into more polyps, which eventually grow and pop off the substrate as individuals, and continue to grow in open water and will then reproduce themselves. 2

10. Irukandji have many eyes

The Irukandi jellyfish has up to 24 eyes, with them being grouped to carry out different functions.

Some are just sensitive to light and others help form actual images (although not in the detail that a humans eye can).

11. The mouth and anus are the same hole

They have only one hole, located on the underside of the bell, which carries out both functions. 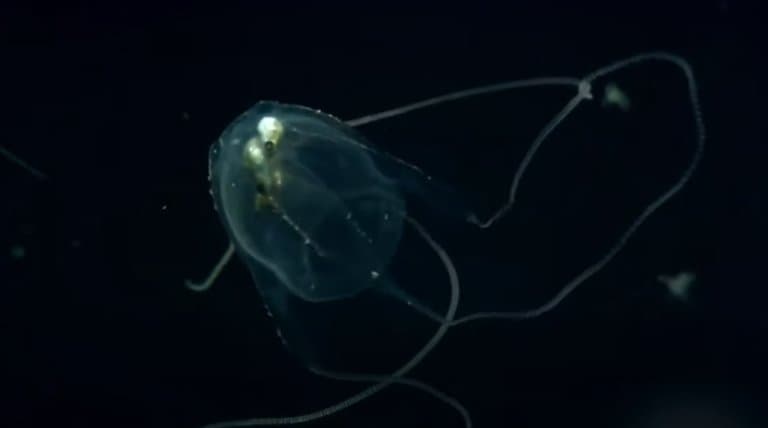 12. They do not have a brain, but do have nerve nets

The nerve nets allows for the jellyfish to control swimming in the water and also help them feed and retract their bodies if necessary. 3

13. Urinating on a sting to help relieve pain is a myth

Vinegar can be used to deactivate undischarged nematocysts and help prevent the release of more venom and is made available across Australian beaches.

However, there is no scientific evidence that urinating on a string helps relieve pain, although it might take the victims mind off the pain for a small moment!

Other substances such as ammonia, lemon juice and alcohol also don’t help prevent the release of venom or reduce the pain of a sting. 4 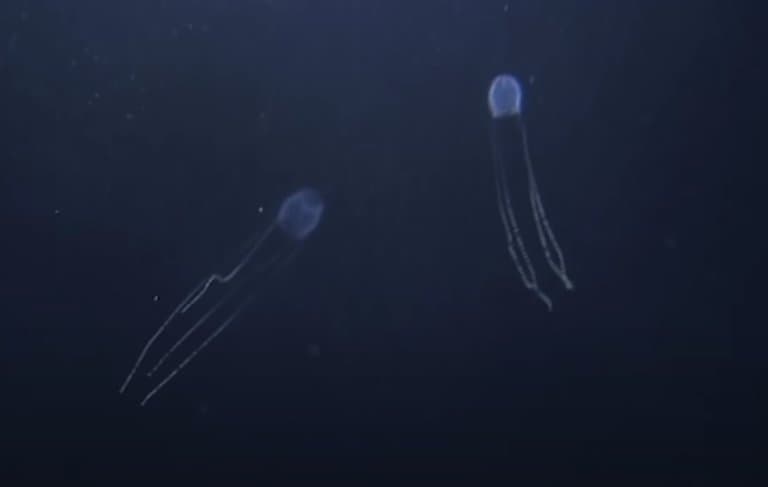