Among all of the needlessly venomous animals in Australia, there’s one that floats to the top of the list every time, the infamous box jellyfish.

This animal operates in three dimensions, actively hunts down and kills its prey and has some of the most lethal venom known. It’s also a member of the most alien-sounding phylum in taxonomy: the Cnidarians (silent C).

When you think of boxes, you’ll probably picture cardboard, voting ballots or other unintimidating and totally survivable experiences. People in Indo-Pacific waters, however, may have totally different associations. 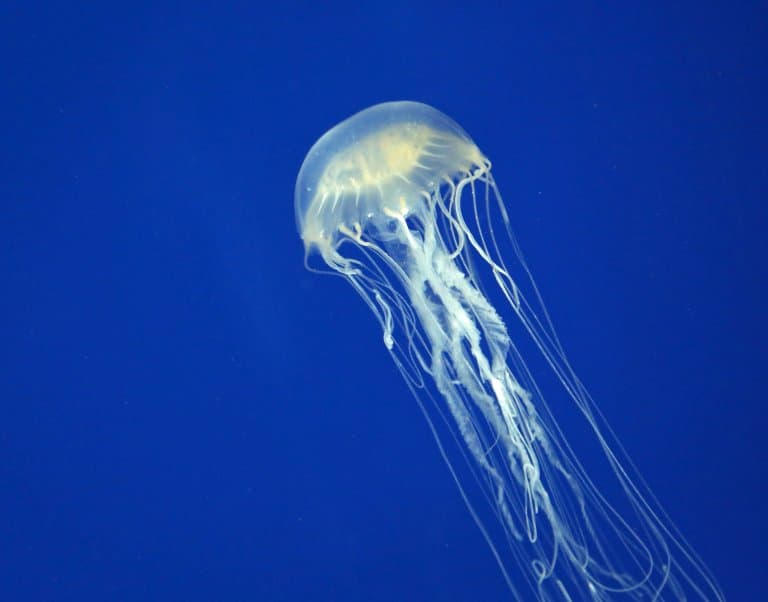 Box Jellies have an infamous reputation; however, that may be a little unfair. These are invertebrates that diverged from other phyla over 600 million years ago, developed their own eyes and nervous systems and have some of the most interesting adaptations of any of the cnidarians.

There’s at least 51 species of box jellyfish across 8 different families and 2 orders, and strings from some species, such as Chironex fleckeri, Carukia barnesi, Malo kingi can be fatal to humans.

Box jellyfish have a box-like bell, with slender hollow tentacles. They like to diet on small fish, which they actively hunt, rather than drift to catch.  Their string helps them kill prey, but also protect it from predators, which include larger fish, crabs and turtles.

Sure, some particularly venomous ones might kill people every now and then, but there’s a lot more to these animals than meets the eye…

Unlike most other jellyfish, who float about dumbly, at the mercy of the currents, box jellyfish have incredible control over their direction and speed. These jellies have a much more advanced swimming mechanic than most, so although Cnidarians often have some control over which way they’re going, they’re not nearly as deliberate as the box jellyfish.

This is due to the rim of their bell being folded inwards to form a shelf (known as a velarium) that restricts the bell’s aperture and generates jet when the bell pulsates.

As is often the case, reports of the speed of these jellyfish are generally unsourced and unrealistic. Still, they have been witnessed moving faster than 7m/s, which is still quite impressive. 1 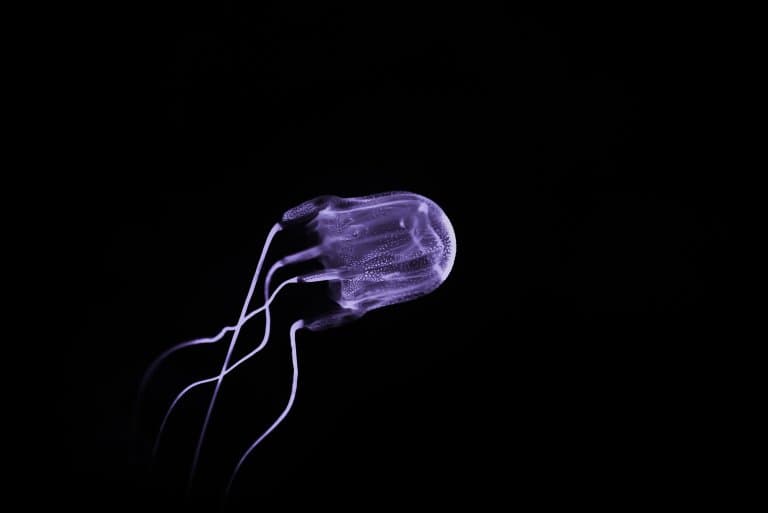 Most jellyfish can’t see. Some have rudimentary ocelli, which can detect changes in light, and help the jelly figure out which way up it’s facing, and what time of day it is.

The box jelly has twenty of these ocelli, supporting four, far more complex real eyes, complete with retinas, lenses and corneas. This is the most elaborate visual system of all Cnidarians!

Researchers have witnessed this jellyfish avoiding capture in the ocean by changing their course in response to the presence of the researcher. They’ve also been shown to avoid dark obstacles placed in their tanks while finding it difficult to resolve an image of similar white obstacles.

It seems that they can’t see directly in front or behind them, but all other angles are covered by their field of vision.

3. They’re not all harmful

While commonly considered one of the most dangerous animals on earth, this is a bit of a generalisation. There is only a handful of species that have the potential to kill.

These species are typically found around Australia, but there are species of box jelly found all over the world and while many can give you a painful sting, most are not dangerously venomous.

4. They’re the smallest order of Cnidarians

Box jellies occupy the order Cubozoa, which roughly translates to “box animal”. There are currently 51 species described, but it’s more than likely we haven’t caught them all yet.

As with anything aquatic, slimy or venomous, far less is known about the box jellyfish than its cuter, more accessible counterparts.

Still, for such a small order, the Cubozoans have some incredible attributes and diversity. 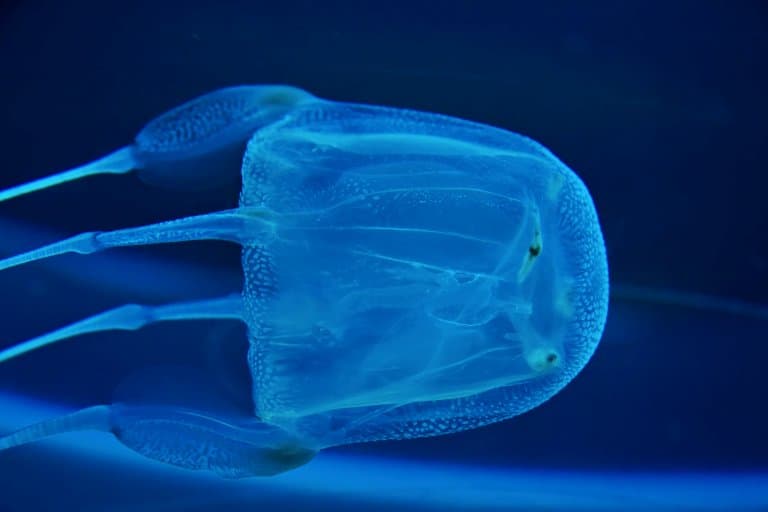 5. They have eight testicles

Eight of these attributes sit in pairs at each corner of the box. They’re formed in a sort of sub-cavity area inside the bell, and in some cases, a ninth, aberrant, “extra” gonad has even been found.

Females also have 8 gonads, and fertilisation varies between species. Some copulate directly, others exchange reproductive cells, and still, others release these cells for external fertilisation. 2

6. They listen to rock

Another cool adaptation, common in cnidarians, is the mechanism that tells them which way is up. The statocyst is a type of hollow sac inside the jellyfish that contains a ball of mineralised rock called a statolith.

This rock functions similarly to the inner ear, in that it changes position inside the statocyst in relation to gravity, and triggers sensory hairs which allow the organism to figure out which way it’s facing, or give a sense of acceleration.

This statolith increases in size by adding layers over time, the number of which can be used to estimate the age of the jellyfish, much like counting the rings on a tree. 3

The bell of the box jelly has an intricate nerve ring that coordinates the swimming motion, as well as helps mediate information transfer from the complex eyes, statocytes and ocelli.

Cnidarians are some of the earliest animals to evolve a nervous system, diverging from other animals over 600 million years ago.

While most remaining cnidarians have simple nervous systems, the cubozoans have an interconnected series of sensory bulbs, suggesting a much more complex organism; one which is still very poorly understood.

Jellyfish have a fascinating way of injecting their venom. Each tentacle is lined with microscopic cells that function as pre-loaded hypodermic needles, called nematocysts.

These cells fire within 11ms of contact with tactile or chemical stimulation, and enter the tissues of prey or predator, rapidly envenomating them.

9. They’re no match for a turtle

Young green and leatherback sea turtles love to eat jellyfish, and they seem to have no reaction whatsoever to the venom. They’re so adept at eating jellyfish that leatherbacks have a 100% success rate and manage to salvage 16,000 Kcal from this low-density food source.

Tragically, plastic pollution in the form of plastic bags is often confused for jellyfish and is much more lethal. Turtles are frequently killed by ingesting or getting caught in plastic bags and ultimately drowning or starving to death. 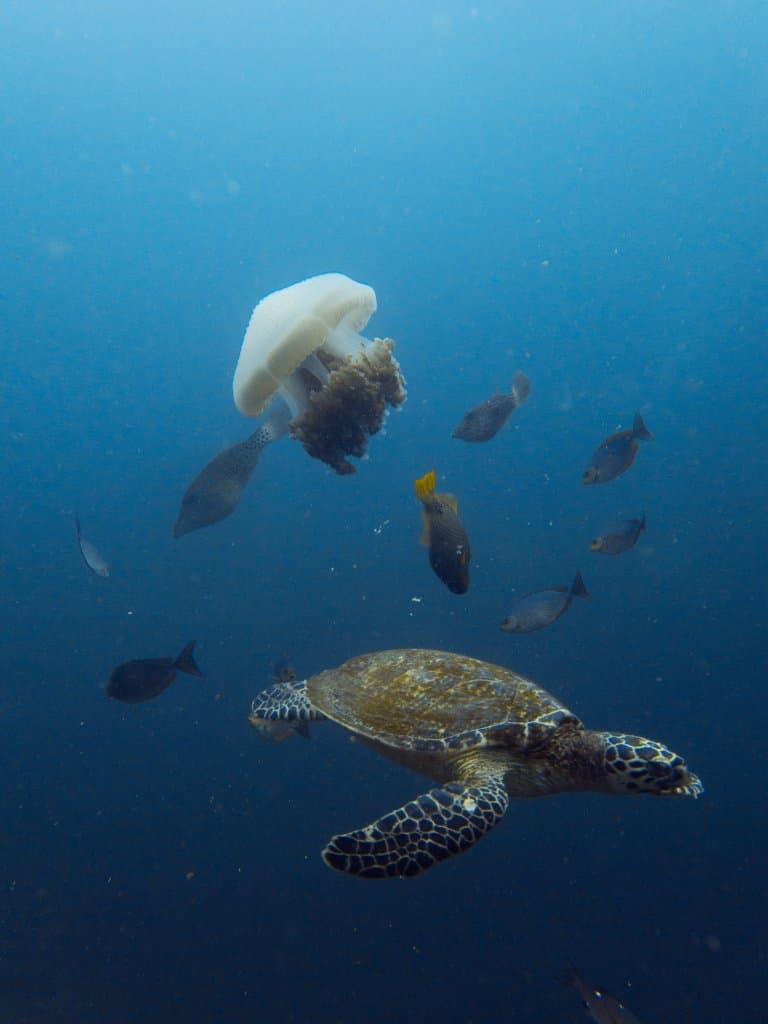 10. The thumbnail-sized Irukandji box jelly can cause ‘Irukandji syndrome’

This syndrome was first coined in 1952 by Hugo Flecker after Aboriginal people who live in Cairns, Australia – where stings are more common.

Symptoms can include severe headaches, backaches, nausea, vomiting, sweating, anxiety and even cardiac arrest. Symptons usually slow down within a day, but can last for 2 weeks!

Fortunately only two people are thought to have died from Irukandji jellyfish stings, and when properly treated they are generally quite manageable.

11. The Australian box jellyfish sting can cause cardiac arrest in 2mins

Chironex fleckeri, also known as the ‘Australian box jelly’ is one of the largest species of extremely venomous box jellyfish found off coasts of Australia, Malaysia, the Philippines and Vietnam.

It’s armed with 3-meter-long (10 feet) tentacles covered with millions of nematocysts, which can deliver potent venom upon contact. This venom ‘locks’ a persons heart as the venom forces it to clench.

While it’s thought to be one of the most venemous creatures in the world, it has only caused 79 deaths since 1883 in Australia. 4 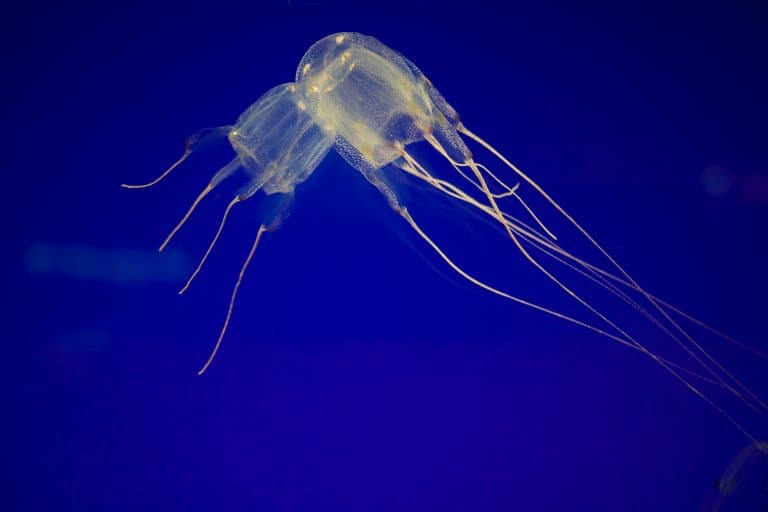 12. Only one person has died from a box jelly sting in Australia in the last 15 years

Sadly a 17 year old died after being stung by an Australian box jellyfish (Chironex fleckeri) in February 2021, while swimming near Cape York in Australia.

The boy died in hospital a week after being stung, which is the first reported death since 2006.

13. Box Jellies are responsible for around 40 deaths each year

This is according to available figures from the U.S. National Science Foundation.

It’s likely this number of vastly underreported though due to difficulties in identifying cause of death and collating reports around the world.

Angel Yanagihara, a biochemist who studies jellyfish venom at the University of Hawaii in Honolulu estimates 500 people die each year from box jellyfish stings in the Phillipines alone.

14. Urinating on a sting to help relieve pain is a myth

Vinegar can be used to deactivate undischarged nematocysts and help prevent the release of more venom and is made available across Australian beaches.

However, there is no scientific evidence that urinating on a string helps relieve pain, although it might take the victims mind off the pain for a small moment!

Other substances such as ammonia, lemon juice and alcohol also don’t help prevent the release of venom or reduce the pain of a sting. 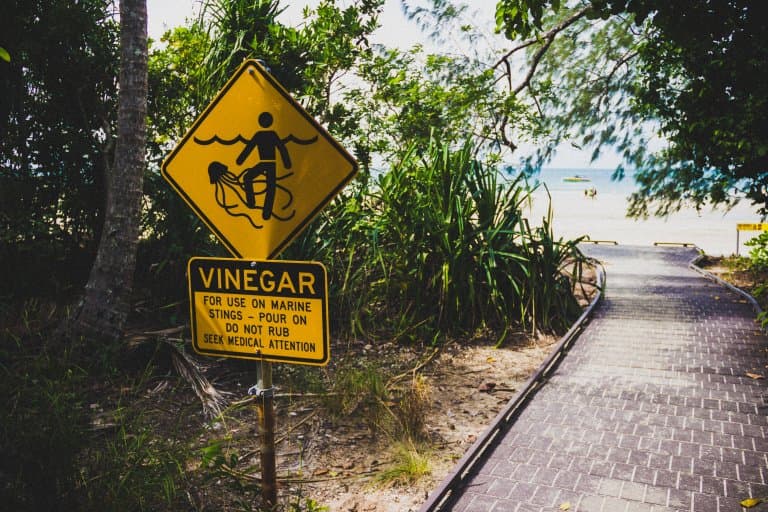 15. Researchers may have an antidote

A study performed by the University of Sydney in Australia suggests venom from Chironex fleckeri interacts with cholesterol genes.

Researchers tested cholesterol-targeting drugs to see if they could block the box jellyfish venom in mice, which was successful in preventing pain, death and scarring within 15mins.

Tests are ongoing to see if they might be able to help humans in an antidote in the future. 5