The honey badger, also known as a “Ratel”, is a stocky badger-like mammal found in, Asia, Africa and the Indian subcontinent. Though not common across its range, they are found in a huge variety of habitats.

Honey badgers are part of the mustelid family, which includes ferrets, weasels, otters, badgers, wolverines and other similar carnivorous mammals.

Honey badgers are one of the largest species found in the mustelid family and are known for their incredible strength and aggressive attitude when facing likely predators. Although named after their perceived love of honey, it’s actually the bee larvae they love. 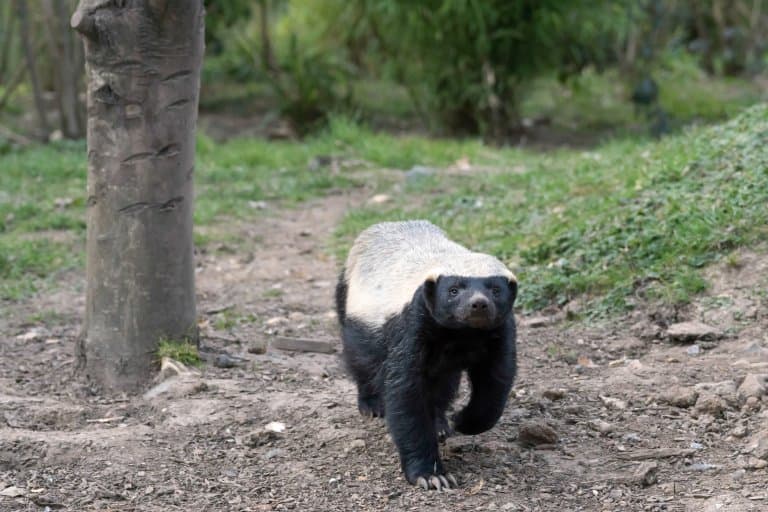 The honey badger is a powerfully built animal with short, strong legs and sharp claws, as well as equally sharp teeth. They are jet- lack in colour except for a grey upper coat or mantle that sits on top of a white stripe that runs from the crown of its head to the base of the tail.

While they have the name ‘badger’, they actually look a little more like a powerful weasel, or polecat.

They are nocturnal and sleep most of the day, and solitary creatures unless breeding. The female honey badger is left alone to give birth and raise her young, which leave home at around 14 months. They use their sharp claws and powerful legs to dig burrows up to 9 feet long to rest, but will also take existing burrows of other animals.

The honey badger will also dig into existing burrows and dens to hunt for invertebrates as well as tortoises, mongoose, rodents, hares, snakes and lizards. It will explore all cavities within these burrows to ensure all possible prey is found and devoured.

Honey badgers are particularly fond of bee larvae and will eat honey when they find it.

Despite popular belief, there is no evidence that honeyguide birds guide the honey badger to bees. Honeyguides are known to deliberately lead humans to bee colonies, as they do not have the ability to access the beeswax found inside the bee hives. Therefore they require the help of humans to open them. However, there is no evidence to support this behaviour for honey badgers.

Honey badgers are also well known for their tremendous courage and fearlessness. They have been observed fighting, killing and eating extremely venomous snakes as well as chasing adult lions from their territory. Honey badgers are relatively slow compared to other carnivores found in their region, so their best form of defence is offence. Their strong jaws, sharp teeth and claws and their ability to rapidly move backwards makes them an extremely formidable foe.

The IUCN classifies honey badgers as a species of least concern, which means their populations are thought to be stable in the majority of their native habitats.

1. The honeyguide and honey badger working together is a myth

The myth of the badger-guiding honeyguide is believed to be from 1785 with a man called Anders Sparrman, who had heard the story from local natives.

He didn’t witness this behaviour, and nobody has ever seen it – even though it has been repeated across the internet, and even by David Attenborough’s The Life of Birds.

While there’s a complete lack of any evidence, it is possible that honeyguides follow honey badgers to honey. An alternative theory is that perhaps some people have seen honeyguides showing guiding behaviour next to a honey badger, as this has happened in the presence of a mongoose and baboon, but neither mammal reacted.

There are some videos claiming to show honeyguides working with honey badgers, but incredibly these are believed to be staged. 1 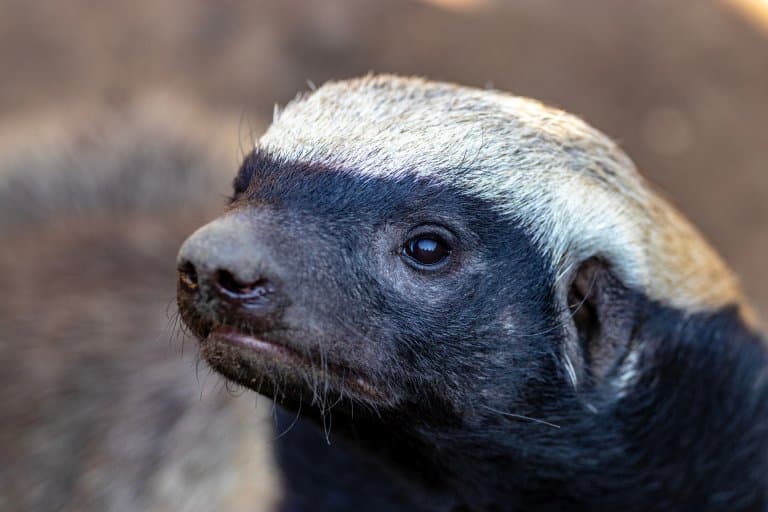 2. Bee-keepers can lose over 10% of their hives to honey badgers

Due to their fondness for bee larvae, honey badgers can be extremely destructive in areas where bees are farmed by people.

They are able to destroy large numbers of bee hives in a single night when the bee-keepers are not present. Honey badgers are prepared to tolerate hundreds of bee stings to get at the larvae.

When attacking snakes or bees, it helps to have very thick skin.

Honey badgers are able to tolerate stings and bites due to their particularly tough skin, and this allows them to eat prey that few others can.

In Africa where they have been hunted for bushmeat, it’s reported that their skin is almost impervious to arrows and spears.

4. Their loose skin helps in combat

As well as their skin being tough, it also hangs more loosely on their bodies.

This enables a honey badger to turn its body and bite back when it is being bitten or held by a potential predator like a lion. 2

5. They are super smart

They have relatively large brains for their size and have shown problem solving skills, been witnessed working cooperatively together to unlock gates, and even use tools.

A captive-bred honey badger called Stoffel at the Moholoholo Wildlife Rehabilitation Centre shows the astonishingly clever tool-use and behaviours he used to escape countless times from his enclosure in the BBC clip below.

6. They scent mark their territories

In the animal kingdom, striped black and white colouring often means danger. The honey badger is no exception! As well as their formidable teeth, claws and powerful bodies, honey badgers can produce a foul smelling secretion which warns others to stay away.

Rather than spraying a foul odor like a skunk, the honey badger can drop their stinky liquid when they feel threatened that can be detected 130 feet (40 meters) away.

8. They will take on an elephant or rhino

When a honey badger is cornered or perceives an animal as a threat, they will growl, hiss and bare their teeth as a warning.

If this does not deter the other animal, the honey badger will dash in and bite viciously. They have been observed chasing away elephants, rhinos, lions and even humans when encountered.

They have 1.5-inch-long (4 cm) claws and teeth that can crack a tortoise shell, making them a formidable opponent for anything.

9. Honey badgers can cover up to 35km in a night foraging

The running style of the honey badger seems rather cumbersome, but this allows them to maintain the same pace for many kilometres. This is particularly effective when chasing hares and similar animals, which eventually collapse from exhaustion. The honey badger has a lot of stamina!

They generally leave their burrows in the early evening in search of suitable foraging areas. 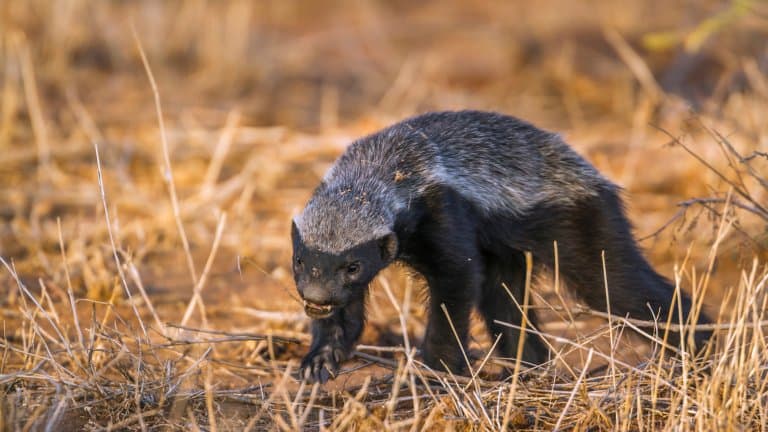 10. The honey badger is an expert hunter

Though honey badgers are very opportunistic foragers, they are also skilled hunters. They have been observed blocking burrows so that their prey cannot escape.

They then proceed to dig out the burrow from behind and pull out the unfortunate hare, mongoose or snake to feed on.

11. They have a powerful sense of smell

It’s thought to be many times more powerful than a human, and allows them to catch the scent of their prey hidden underground while foraging in the night.

When food is scarce they will search around bodies of water for food. They are decent swimmers and will even swim underwater to catch turtles and other aquatic creatures.

13. They have built up immunity to snake bite venom

Danielle Drabeck an evolutionary biologist at the University of Minnesota published a study in 2015 that found honey badgers have evolved a series of genetic mutations that stop snake venom toxin from shutting down their nervous systems.

This allows the honey badger to prey on venonmous snakes for their meal. It’s thought that up to 25% of their diet are snakes. 4

Though seemingly aggressive in the wild, both tame and wild honey badgers have been seen somersaulting down hills as well as playing with rocks and logs after they have eaten and rested. 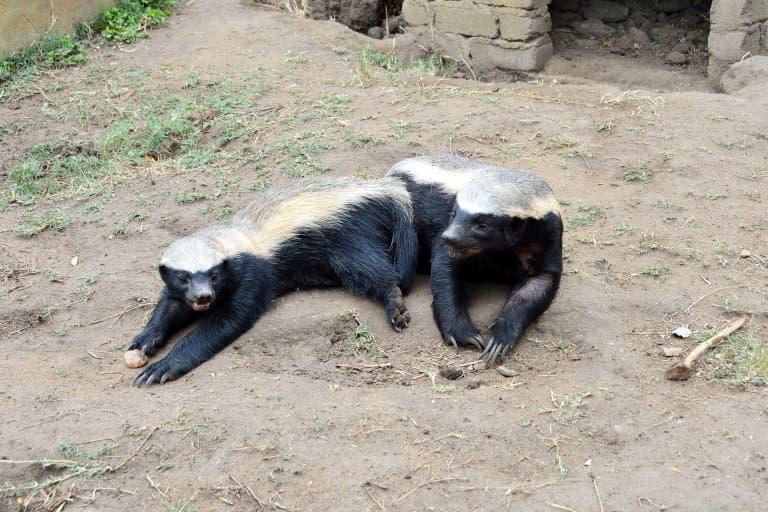