Spiders have been a focus of both morbid curiosity and rabid aversion for arachnophobes everywhere, possibly since before modern humans were even invented.

However, while there is some evidence of inherent fear of snakes in captive primates (suggesting the fear is built into our genes), there’s no such discovery with spiders, and this suggests we have passed on an irrational fear of these mostly harmless arthropods by over-reacting to spiders in front of our kids for generations.

Still, faced with a spider the size of a dinner plate, with an abdomen like a brown, furry tennis ball and fangs as long as your little toe, you may find it hard to remember that your fear is simply a learned response passed on by a hysterical parent. 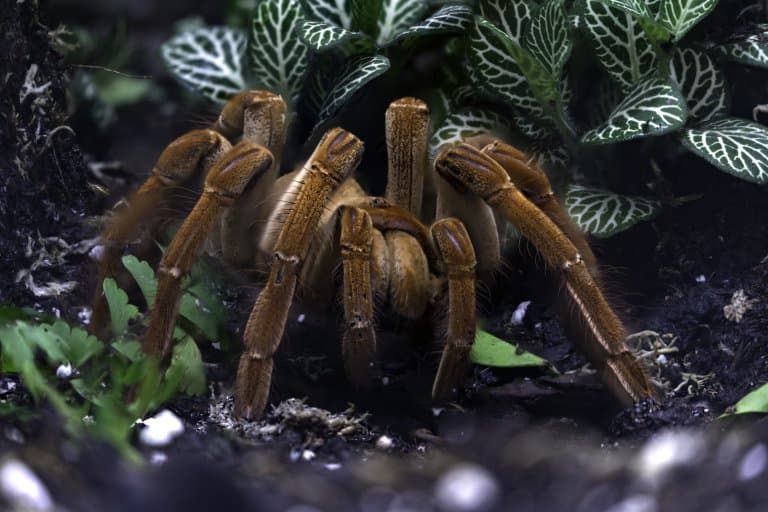 The Goliath Birdeater is the ‘largest’ spider ever to have existed. Maybe. It’s certainly the largest we know of, and its name suggests as much.

Something about arthropods eating vertebrates sends our spidey senses into overdrive; it’s supposed to be the other way around! But this arachnid is plenty big enough to take on animals with a spinal cord. Not only that, they can make a frightening sound and send some dangerous hairs your way.

The Goliath Birdeater inhabit rainforests in Northern South America from Venezuela, French Guiana and south into Brazil – and most notably lives in the Amazon rainforest where it lives in deep burrows in the ground. They are nocturnal, and are often found in upland marshy or swampy regions.

Thankfully, they’re relatively harmless, and they don’t eat as many birds as their name or reputation suggests, preferring to diet on insects, worms, frogs and rodents. These big spiders don’t weave round webs to catch prey, instead they lay in wait on the rainforest floor amongst the leaf litter.

1. They are the largest spider in the world

As you may know, the terms “large”, or “big” aren’t very useful on their own, as there are a few ways to define them. For example, the longest animal in the world isn’t the same as the heaviest, and even the heaviest will depend on the medium in which it’s weighed, and change in relation to the gravity well it’s in, so a space spider might weigh less than a terrestrial one.

Even a spider’s mass will be affected by how fast it’s thrown. You may think this is vacuous pedantry, and you’d be mostly right, but at least, in this case, length and mass do matter.

The giant huntsman spider has a leg span of 30cm (12 inches) and is considered the “largest” spider by that metric, but if you go by sheer mass, the Goliath Birdeater knocks it out of the park.

Despite having a leg span of closer to 28cm (11 inches), it has a mass of around 170g or 6oz. This is more than twice the mass of the huntsman and makes them the most massive spider alive. 1

2. They might be the largest known spider ever to live

The remains of a 300 million-year-old spider was found in 1980; a creature with a leg span of around 48cm (19 inches), but in 2005 it was reclassified as a water scorpion, presumably because a half-meter spider is just too frightening a concept.

This leaves the Goliath Birdeater at the top of the charts for most enormous spider ever, as far as we know…

3. They can also hiss

As if their size wasn’t creepy enough, Birdeaters release a threatening hiss when alarmed, generated by rubbing their hairs together.

This hiss can be heard from several meters away and might be accompanied by a threat display as the spider rears up to remind you of its 4cm fangs. 2

4. Their bite is more scary than dangerous

As with all spider fangs, these enormous hypodermic needles do contain venom, but tarantula venom is rarely medically significant – more like a wasp sting. In fact, a lot of bites won’t even inject the animal’s precious toxins and are simply imposed as a deterrent in self-defence.

Still, getting pierced by those fangs will of course be painful, and there are other things than venom to be worried about. Though more common in ‘true’ spiders (non-tarantulas), all spiders can have dangerous bacteria in their mouths that can cause infections, such as staph and strep.

This giant spider can also release irritant hairs (called ‘urticating bristles’) from its abdomen as a defence, which are said to be more dangerous than its venom. These bristles are barbed, and they can lodge in a predators eyes, mouth, or face.

5. They don’t chew their food

With only fangs to kill prey and no teeth to chew their food, they regurgitate digestive juices onto their prey, which breaks down their soft tissue, and allows the goliath bird-eating spider to drink the liquid of their prey – sucking them dry!

It leaves behind the bones, skin and fur – which are eaten by other animals and insects on the rainforest floor.

6. Despite all this, they’re edible

Their large size and relatively slow movement make them an easy target for local tribespeople looking for a healthy snack. Goliath kebabs are common in many places where these spiders live, and their flesh is said to taste like prawns. This might not be so strange, as arachnids and crustaceans are both chelicerates, defined by their different mouthparts to their insect cousins.

After eating the spider, its fangs are used as toothpicks. 3 7. Birds are not its preferred food

Despite the name, there have been very few confirmed cases of this spider eating birds.

It’s certainly large enough to take on a hatchling in a nest, but the chances of any medium-sized parent bird letting it survive this encounter undamaged are slim.

Spider collectors typically feed their spiders roaches, crickets and mealworms, and in the wild, the diet is going to be mostly comprised of insects, frogs and lizards. However, small bird species may be on the menu, as the sheer size of this spider makes it a strong predator of anything smaller than itself.

8. They may be some of the longest-living spiders

There’s one record of a close cousin of the tarantula, a trapdoor spider, lasting 43 years under observation before a hunting wasp took her out. And while birdeaters typically live for 10 to 25 years, there are records of individuals of this family living in excess of 30 years. 4

Even with eight-eyes! Instead they sense vibrations from both the ground and the air using the hairs on their abdomens and legs.

This helps alert them when prey is close when they hunt in the leaf litter on the rainforest floor. 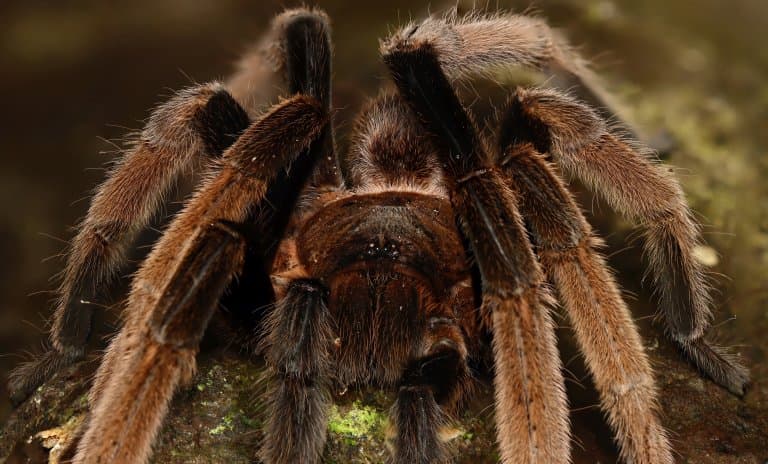 Arthropods are notorious for the disposable nature of their males. Praying mantises, black widows, and even many species of tarantula are known for bouts of sexual cannibalism.

The female birdeater, however, is a lot more forgiving.

The male, after mating, is free to go about his work. Unfortunately, his lifespan is still significantly shorter than hers; at around 3 to 6 years. 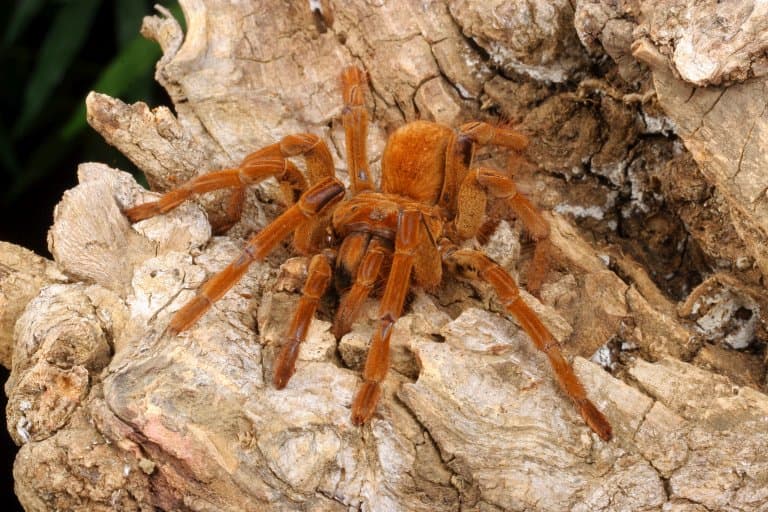 11. Their spiderlings are nearly 0.75 inches long

Most baby spiders known as spiderlings are tiny, but not the Goliath Birdeater’s – even their babies are big, measuring up to nearly an inch long.

The female will lay up 70 eggs, which are kept safe inside a silk sac.

They hatch from their eggs and will stay with the mother for up to a few weeks, growing quickly – before they leave and fend for themselves.