Their leg span can be as large as 30cm, about the size of a big dinner plate.

Like most huntsman spider species in Laos, they prefer dark and warm places to live in and limestone caves create an ideal habitat for this. In these caves, the giant huntsman spider crawls around the entrance in search of prey. They are fast moving spiders and are excellent hunters, catching insects and other spiders and occasionally even feeding on birds and small rodents.

Due to the difficulty of accessing the caves where the giant huntsman spider lives, very few people in the world have actually seen them in the wild.

Like other huntsman species, they do not build webs and instead actively chase down their prey with surprisingly quick bursts of speed. Then rely on their large, strong legs to jump onto their prey and use their powerful jaws to clamp down before killing their victim.

Male and female giant huntsman spiders look comparatively the same, with their light colouration and lined legs. There is a way to tell the sexes apart however; males tend to have longer legs while females have larger and more robust bodies. When it comes to reproduction, males and females spend a large amount of time caressing each other as part of a mating ritual before the male fertilises the eggs. As in other species of spider, it is not uncommon for the female to kill and eat the male after mating.

As these spiders are relatively new to science, we still have much to learn about their habits and unique behaviours. Currently they are thought to be found only in a tremendously small area and therefore the giant huntsman spider is particularly vulnerable to any changes to its habitat.

Human disturbance and climate change could have a disastrous effect on their existence and population numbers, but if protected properly, the spider with the worlds largest leg span will continue to thrive in its limestone cave habitat.

1. They are the largest spider in the world, by leg span

Their legspan can measure up to 30cm (12 inches) which is as is as big as a school ruler or large dinner plate.  Their body length is small in comparison, but still a sizable 4.6cm (2 inches). 1

2. They prefer to live just at the cave entrance

They have quick reflexes, rapid bursts of speed and incredible agility. This makes the giant huntsman spider and excellent hunter.

4. Prey up to the size of rats and birds are sometimes eaten

Although they usually feed on insects, the giant huntsman spider will pounce on unsuspecting rodents or birds that may happen to enter their cave. They can detect prey through small vibrations.

5. Females sometimes eat males, and occasionally they eat each other!

After mating, the female may occasionally kill and eat the male. If food is in short supply, the giant huntsman spider may eat other huntsman spiders in order to survive 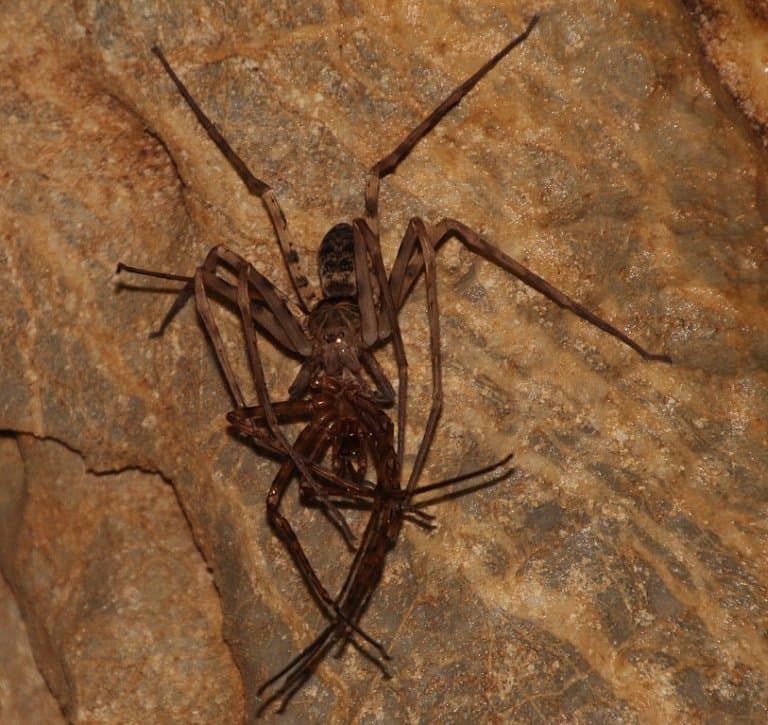 6. Females can lay over 200 eggs and will fiercely protect the eggs sacs

Giant huntsman spiders make good mothers and will chase away other animals when protecting their precious eggs.

7. The giant huntsman spider is known to exist in only a single series of caves in Laos

In 2001 scientists first discovered this species in a cave in the Khammouan province of Laos. It appears to be the only place on the planet in which they reside.

8. They live up to the name “huntsman”

Although they can produce silk, giant huntsman spiders do not spin webs to catch food. The hunt and chase down their prey.

9. The spines or hairs on their legs help them to cling to cave walls

The walls of limestone caves are usually rather damp and smooth. The giant huntsman is able to move across this surface with ease. This is thanks to tiny hairs on its legs that create a greater contact surface area with whatever it is running on.

10. They are sometimes referred to as ‘crab spiders’

Giant huntsman spider legs, as well as being incredibly long, bend forwards at the joint much like the legs of crayfish and crabs. In fact huntsman spiders in general are often referred to as ‘crab spiders’ due to their leg orientation and the way they crawl.

They have a relatively flat body, which is dwarfed in size compared to their legs. Their legs are covered in tiny spines and their body is relatively hairy.

Although the giant huntsman spider does produce venom, which is required to subdue their prey, they are not thought to be dangerous to humans. They actively run away when approached, even climbing and jumping vertically off the cave walls to escape.

Nevertheless they do have powerful jaws or chelicerae and can produce a rather painful bite if held roughly. More commonly, these jaws are used to break up their captured prey into smaller bite-size pieces.

12. There are over 1,000 species of huntsman spiders across the world

The giant huntsman spider is only one species of over a 1,000 huntsman spiders known. They are usually found in warmer climates and are referred to ‘huntsman’ due to hunting prey.