Goliath beetles are a group of 6 species of large and bulky beetles found throughout Africa in tropical rainforests. They are among the largest insects in the world in both size and weight at larvae stage, and when as adult beetles.

They can often be found on the forest floor in search of fallen fruits and plant sap and despite their large size, are capable fliers. 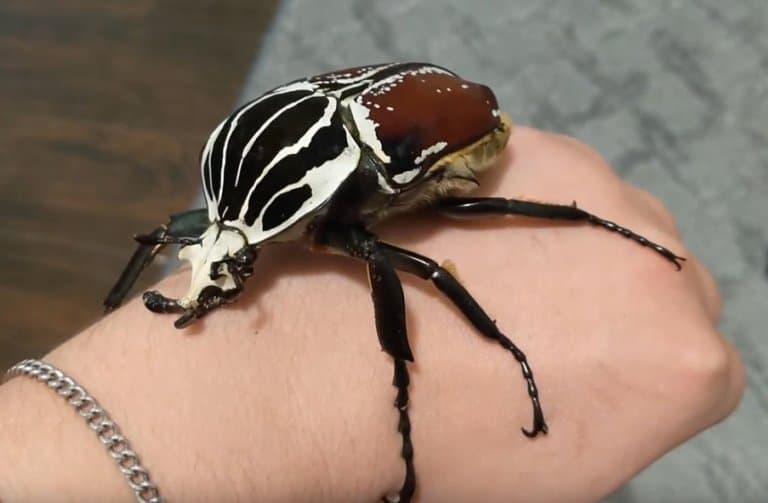 Found across Africa, from South Africa up to Central, Western and Eastern Africa, they are most commonly found in tropical forests and rainforests but can also be found in subtropical climates. Their larvae are usually found underground, feeding on rotting wood, fruit and animal remains, while the adult beetles spend their time searching for food on the ground or fly up to trees and other plants during their foraging.

Though size and color differ across species, goliath beetles often have a black and white striped thorax with a different coloured abdomen. Males have rounded heads with small, fork-shaped horns while females lack these horns and have a more wedge-shaped head.

The goliath beetles consist of 6 separate species, all found in Africa. Though the species differ slightly in size and diet, they are all generally large and sturdy beetles, with some form of black and white striped colouration across their body. The exceptions are G. casicus, G. goliatus, which have orange and red backs respectively. G. regius, also known as the Royal goliath beetle, is the largest of the species, with the adult beetle measuring up to 4.5 inches in length. Males of all species are generally larger than the females.

The life of a goliath beetle consists of 4 life stages. Usually a female lays her eggs in small depressions or burrows in damp soil or rotting wood. The eggs hatch into larvae during the rainy season and burrow further into the substrate. Some larvae of goliath beetles can reach up 250mm in length and are some of the heaviest insects in the world. The larvae of goliath beetles consume as much protein within the soil or plant and animal matter as possible and therefore reach an extremely large size. The larvae then change into pupae, which are inactive until the ground becomes damp again. Here the adults hatch and leave their burrows in search of a mate.

As with most beetles, goliath beetles are an important part of the ecosystem. Both the larvae and adult beetles provide food for a large number of predators, maintaining a healthy food chain in that environment. Their burrowing underground helps aerate the soil as well as providing shelter for other insects. They also help remove decaying plant and animal matter from their habitat.

1. They are some of the largest insects in the world

Though the adult beetles are not particularly massive they can grow up to around 12cms (4.5 inches), and their larvae are considered the heaviest insect by weight in the world.

2. Goliath beetles are only found in Africa

Though commonly kept as pets, goliath beetles are native to Africa and not found in the wild anywhere else in the world.

3. Goliath beetles are part of the scarab beetle family

That includes species such as the rhinoceros beetle, dung beetle and the hercules beetle. These beetles are generally stocky, well-built insects with short antennae and thin, strong legs.

They most commonly have two-toned colouration but some species, including those in the goliath beetle genus, have contrasting patterns and brightly coloured thoraxes.

Some of the scarab family are well known agricultural pests, however the goliath beetle species pose little threat to crops and are in fact indicators of a healthy ecosystem. 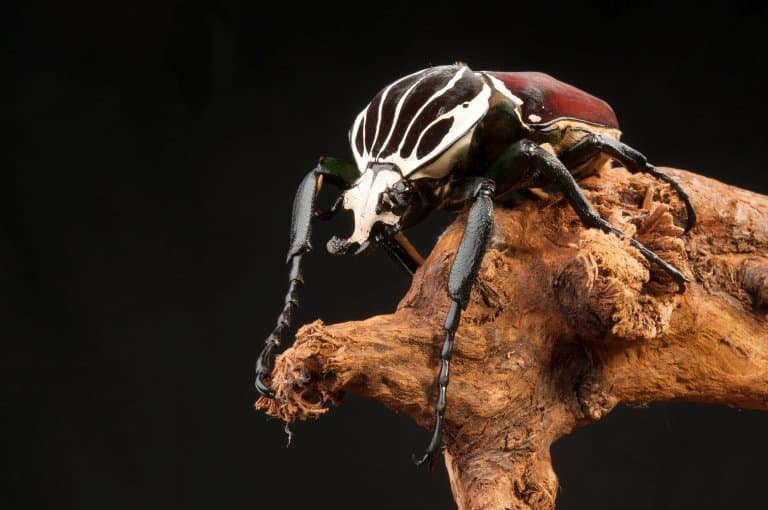 4. They are often kept as pets

Due to their docile nature, appealing colouration and size, these beetles are often kept as pets. However, they are not easy to keep, and are very different to other types of beetles.

They are actually quite fragile and need to be held with care.

5. One of their biggest threats is the pet trade

Though they may be fairly common in the areas they inhabit, certain species and individuals with more attractive colouration are becoming increasingly rare due to being removed from the wild.

6. They can lift over 800 times their own body weight

Thought to be one of the strongest insects in the world, goliath beetles can lift and move over 800 times their own body weight. 2 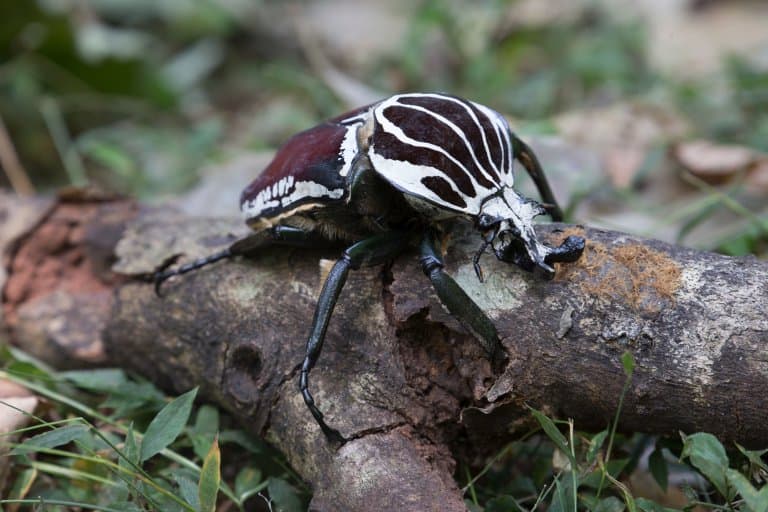 7. Goliath beetle larvae, like many in the scarab family, are c-shaped

It is thought that this helps them burrow more easily and allows more grubs to fit in a given space.

Metamorphosis requires a lot of energy and before turning into a pupa, the larva will consume as much food as possible to ensure the adult beetle emerges healthy and strong.

Even though different species have slightly different diets, all goliath beetles eat sugary fruits and plant sap. As pets they are even sometimes fed brown sugar syrup! 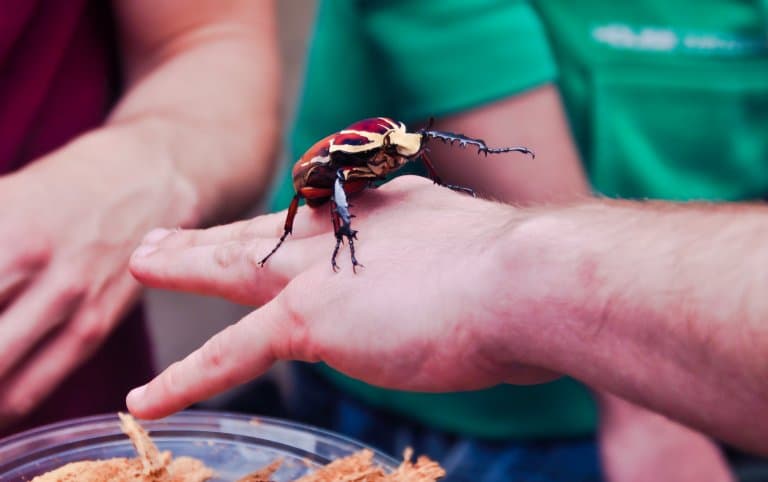 10. The grubs or larvae are sometimes eaten as a protein-rich snack

In some countries across their range, the large, nutritious larvae are consumed by people and are seen as a good protein alternative.

Due to their large size, goliath beetles make a lot of noise when they fly. They have forewings and hindwings, but only their hindwings are actually used for flying. Their forewings known as elytra act as protective covers for their more delicate membranous hindwings.

Theyy have 6 legs and are strong climbers owing to the sharp claws on their legs. 3

12. Male goliath beetles will aggressively fight with each other

Male goliath beetles use their fork shaped horns to wrestle one another, especially during the breeding season.

Females lack these horns, and have more of a wedge shaped head which helps when burrowing to lay eggs. 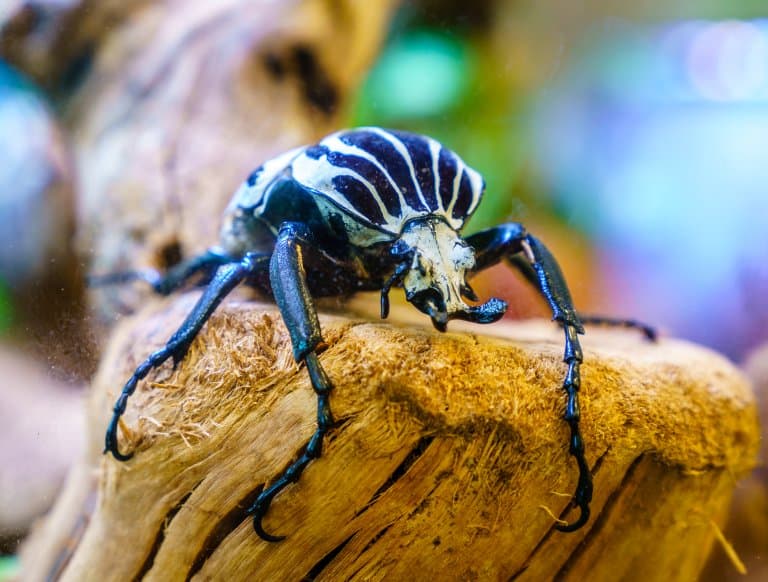