The giant forest hog is the largest member of the wild pig family, with three subspecies inhabiting largely different areas across the African equatorial belt.

It ranges within a number of forest type habitats, usually at higher altitudes, and likes to spend the majority of its time hidden under dense cover to avoid strong sunlight.

The giant forest hog resembles an oversized bush pig, with a huge head, wide snout and extensive inflated cheek pads. Males are larger than females and they can live in groups of up to twenty individuals (although 12 or so individuals is more common). 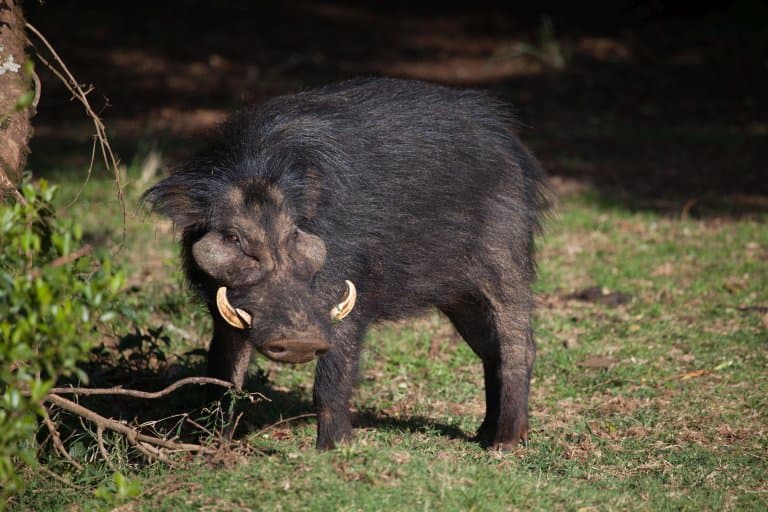 Giant forest hogs inhabit a number of different forested areas. These include lowland rainforest, dry forests linked to savannah areas, montane forests and areas of bamboo. They mainly stick within these areas and will only come out into clearings to look for grasses and sedges. They will always retract into densely covered areas once feeding is finished.

They graze on vegetation but do not use their snouts to root around like other hogs. Instead they use their incisors, muzzle and lips to pluck grass and then use their molars to grind it. They have also been observed using their lower incisors to dig up earth and eat this too (possibly to extract minerals) and are sometimes known to scavenge.

Giant forest hogs can cope with hot and cold weather, however they become less active when it is too cold and also avoid strong sunlight. They also aren’t fans of low humidity areas. Giant forest hogs have been observed in more open areas at night where they will do a few hours of grazing. Giant forest hogs are more active in areas that they are not hunted in and can spend up to 10 hours per day roaming. Adults can travel between 8-10km per day.

They have different areas within their ranges for wallowing, sleeping, drinking and rubbing. There is usually an area to lick minerals too. Their range includes regularly used paths that lead to these different sections and also a pasture type space. They do like to change areas when necessary. Giant forest hogs have spatial memories, meaning they can remember where important spots in their environment are.

Males have different behaviours expressed when needing to pose a threat. They will strut and bristle their hair and also raise their hair. They will sometimes foam at the mouth and grunt. When fighting they will try to push their opponents snout to the side, knock their forehead and also ram into them at a pace.

1. They are the largest living wild species of pig 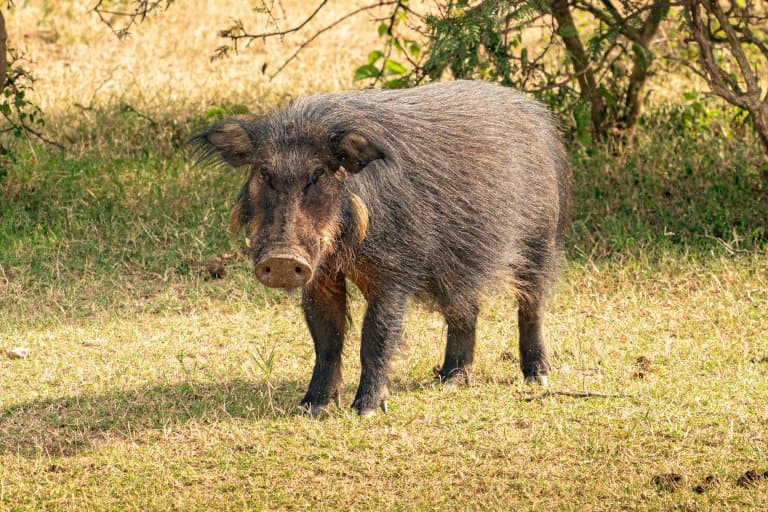 A group of giant forest hogs usually has a dominant male and 4-5 females plus offspring. At times there will be subordinate males in the group too. Sometimes groups will meet in overlapping territories, especially at features such as waterholes.

Giant forest hogs have been observed eating the faeces of other animals. This is to get the nutrients from the undigested food contained in the dung.

Male giant forest hogs will often fight for dominance in the group.

The loser of the fight will most often leave the group, however it has been noted that at times they fight to the death.

In the wild, males can attack without warning – and have been known to drive away spotted hyenas from carcasses.

5. They crack foreheads when fighting

Sometimes when males are fighting and they hit their hollow foreheads together, the result will be a loud cracking sound (where the air has been compressed between the two). It’s good that their skulls are re-enforced!

Giant forest hogs travel in groups to look for mud pools to cool off in together. They like to travel together as there is safety in numbers and also levels of vigilance are higher with more individuals. 2

Within the range of a group of giant forest hogs they will designate an area (usually at the bottom of trees) as their latrine.

8. They can carry diseases

The giant forest hog is a carrier of African swine fever, however does not experience any of the symptoms itself. It carries the specific tick that transmits the disease.

African swine fever is lethal to domestic pigs. In their blood stream they also carry the parasitic protozoa (trypanosoma) that causes sleeping sickness. This is then carried by the tsetse fly to humans and livestock. Giant forest hogs also transmit the disease rinderpest that can affect livestock too.

9. They leave the ‘sounder’ to mate in private

When a male and female hog are ready to mate they will leave the group, with the male grunting and urinating often to indicate that he is ready. He will then butt her back end before copulation. 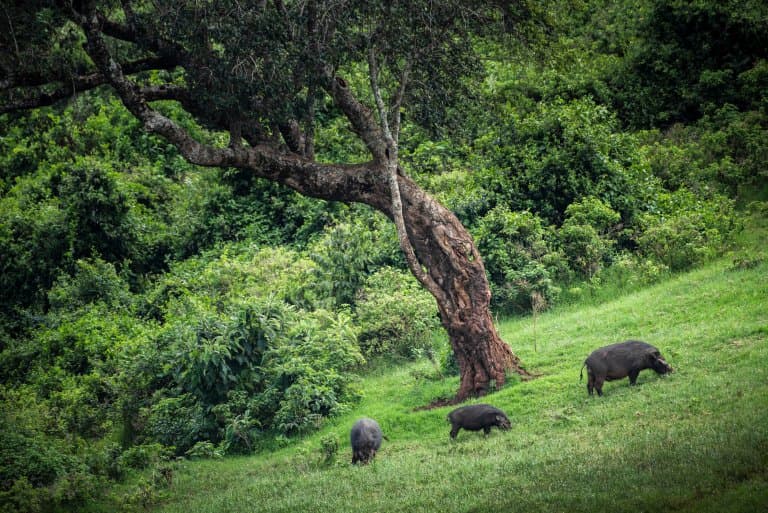 Females give birth in a dry nest, usually to 2-11 piglets. The piglets are not striped like many other pig/hog offspring. When the piglets move out in the open, the will be very well protected by their mother and father, even being surrounded when there is a threat.

11. They are often eaten as bushmeat

Giant forest hogs are often tracked and hunted for their meat, which can even be sold in markets (often disguised as another legal type of meat).

However in the Congo this is less prevalent as many people have an aversion to the meat (although not everyone).

12. Males have been observed protecting their young

In some more Eastern regions of the Giant forest hogs range, dominant males have been observed protecting young under their legs (usually a job that the females carry out).

This appeared strange as dominant males are also known to commit infanticide (killing of young).

To cool down instead, they rub their bodies in water and mud. When the mud dries it also helps protect their skin from the sun. 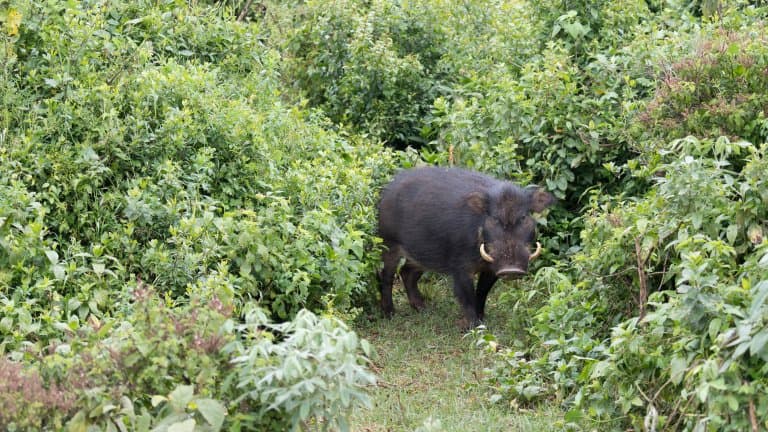 14. They huddle together for warmth

When it is cold, especially at night, individuals in the group will often huddle together for warmth.

15. They have scent glands in their butts

Although both males and females have large cheekpads, the males’ contain scent glands to help them mark their territories.

They know that humans pose a risk to them and will actively avoid areas that are frequented by people because of this.

They are extremely illusive and that is why relatively little is known about them. 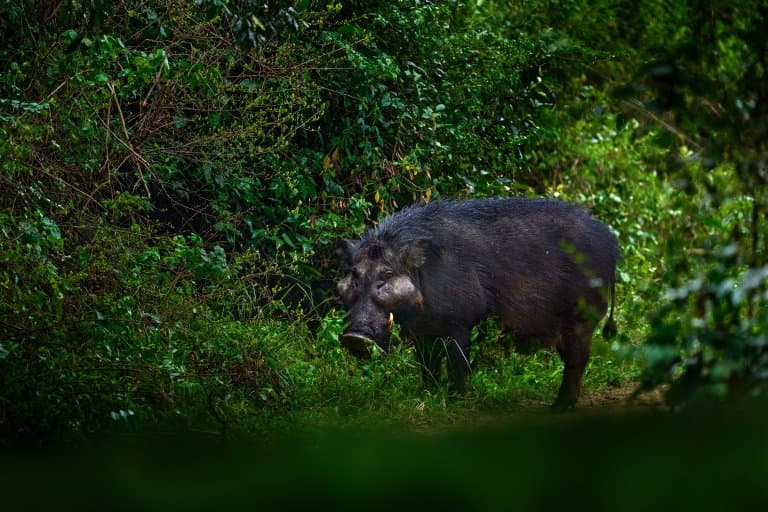 They are seen as one of the worse crop raiders (as well as vervet monkeys, baboons, bush pigs and warthogs). Although they do like to avoid humans they will take the opportunity for an easy meal when it is presented to them.