Imagine a world teeming with gentle giants; tens of millions of animals the size of passenger jets, cruising effortlessly through the uninterrupted ocean.

Their distant calls bellowing for hundreds of kilometres in every direction as hordes of behemoths communicate with one another over incredible distances. Telling ancient tales or singing songs passed on from their ancestors over aeons of ecological balance and peace.

Then imagine a brief, 100-year massacre, in which 99% of their numbers were dragged bleeding behind boats, gripped by exploded harpoons embedded a foot into their flesh.

Hunted almost to extinction, and still now, tormented by the deafening sounds and dangerous propellors of the commercial shipping industry, this is the tragic story of the second-largest animal to have ever lived on the planet: the great fin whales. 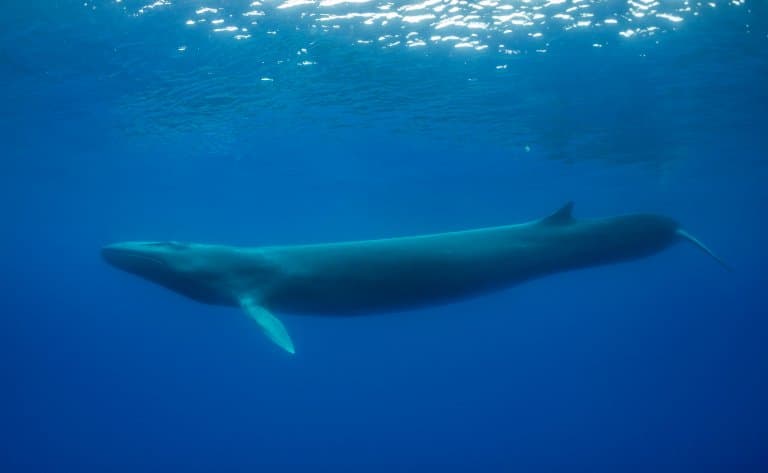 The fin whale is also known as the finback whale, or common rorqual. They are rorquals, the largest group of baleen whales which also includes the blue whale, the humpback whale, and minke whales.

They are a close relative of the heaviest animal that’s ever existed the blue whale, and they share a lot of commonalities. They’re equally loud, have a similar timbre to their voices and can move at tremendous speed for such a huge animal.

They are carnivorous, aquatic mammals that filter plankton and smaller fish from the sea water inside their mouths.

Their speed kept them safe from the early whaling of the 1800s but did nothing to help them against modern ship technology and exploding harpoons. In the 1900s, they were quickly reduced to one or two per cent of their former numbers and though their numbers are on the rise again, a recent relaxing of their protections may spell more threats to come.

Still, their numbers are on the rise, and with their return comes new insights into the significance of their role in both the ecosystem and the climate patterns of the Earth.

1. They have the deepest voice on earth

Whales are huge, but the space they live in dwarfs even them. To find one another, they shout. These long-distance calls span hundreds of miles and in fin whales, dip into frequency ranges far below what the human ear can pick up, and is the lowest frequency call of any animal recorded.

They’re also LOUD! At up to 186 decibels, they’re louder than the inside of a jet engine. 1 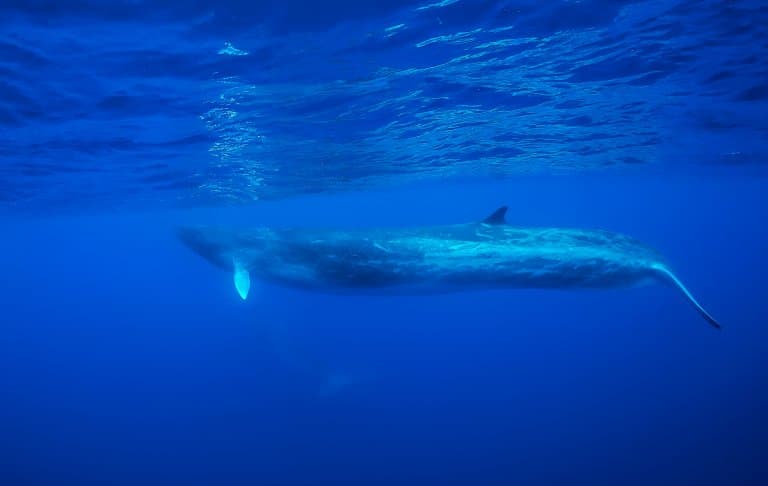 2. They’re the second-largest animal in the world, ever!

What’s bigger than a Fin whale? As far as we know, there’s only ever been one animal on earth that could top it, and it’s a close cousin of the fin whale: the blue whale!

And to put this in perspective, the longest Fin ever measured 27m (89ft) and was longer than the average size of the world’s largest animal.

It’s incredible to imagine a planet teeming with animals this huge, for so many years before human intervention. Pre-whaling numbers would have been in the millions of individuals for fin whales and further millions for Blues, and uncountable numbers of smaller species too.

Like all large mammals, whales have complex emotional and cognitive capacities. Unlike most mammals, however, their brains have a special type of neuron that’s associated with deeper thought and complex sociality in humans.

These spindle or von Economo neurons were recently considered a unique feature in human brains and have implications in the rapid communication across large areas of the brain, leading to advanced social adaptations like cooperation and friendships.

By every measurable metric, these are cognizant, loving, considerate animals, which makes it all the more unpleasant to hear about people exploding them with harpoons. 2

4. There are ‘blue-fin’ hybrids

Or should have that be ‘Fin-blues’? Hybrids of the two largest animals in the world were discoveredby researchers in the 1990s.

Scientists believed the whales would be infertile, however their studies show that hybrids survive into adulthood, and are capable of reproduction.

While scientists are unsure why the two different species cross-breed, it’s hypothesized it might be due to the low population size of blue whales. Sadly, female blues might be unable to find a mate of their own species, and must settle for a fin whale partner. 3

Fin whales feed by swimming along with their mouths wide open, before closing it’s mouth and pushing water back out through it’s baleen plates.

This filters out the water, but traps its prey. Each gulp can contain 10kg of krill, and they can easily consume 2,000 kg in a day. 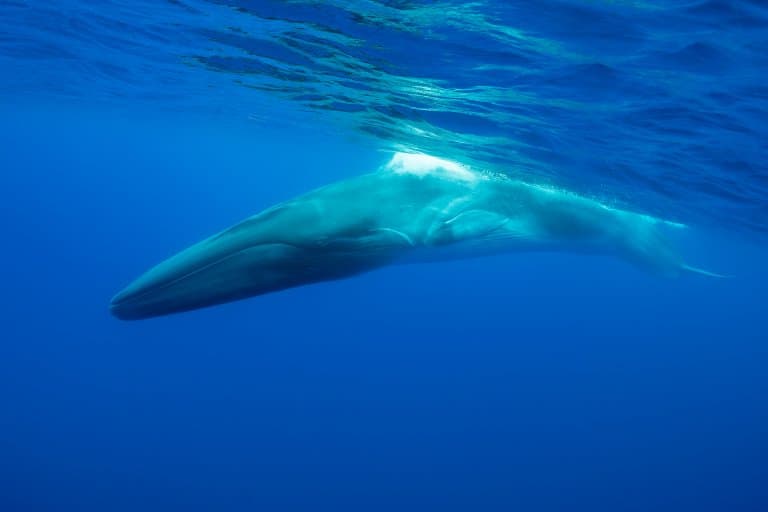 6. Whaling countries have been a serious threat to whale numbers

Much like the dying traditions of pillaging and child marriage, whaling in some countries still has some powerful cultural inertia behind it.

Looking at it from countries where whaling isn’t as much a part of history, it might seem like mindless barbarism that’s also accelerating our descent into total ecosystem collapse.

However, it should be remembered that because of these traditions, people just really like killing whales and have been doing it for generations. And that has to count for something, right?

Norway has lawn robots, world-class socialised medicine and free education for everybody. Norway also kills more whales than any other nation, despite Japan’s best efforts, and despite a global ban on commercial whaling (which they ignore) that’s been in place since 1986.

7. But they’re making a comeback… maybe?

In a highly controversial move, the IUCN moved Fin whales from endangered status and moved them up to vulnerable in 2018. Citing the success of a whaling ban, and the doubling of the fin whale’s numbers since the ‘70s to 100,000 individuals, these whales are now entitled to fewer protections from international regulators.

It’s hard to say whether this was a good decision or a bad one, but critics suggest that there are still too many significant threats to fin whale populations, as well as insufficient data on their numbers to reclassify them with any certainty.

Some of the assumptions made in the report used to justify the IUCN decision are of legitimate concern, as is the lack of any clear recovery strategy, threat removal plan, identification programs or any of the usual safeguards against further decline that usually accompany a reclassification of an animal to a less protected status on the Red List. 4

8. Some whaling countries do seem to be losing interest

Whaling seems to have become unprofitable for Iceland lately; no fin whales and only a single minke whale were killed by their ships in 2021.

Norway makes no such progress, although its focus is almost exclusively on the much more populous minke, of which it kills over 500 a year.

The concern, however, is that by lowering protections for fin whales, they will return to the menu.

Japan continues hunting fin whales, along with many other species, under the dubious guise of scientific research. 5

9. Populations may have returned to 30% of pre-whaling numbers soon

It’s hard to get good estimates of pre-whaling populations. Whaling records aren’t very reliable, and even modern population counts are difficult. Conservative estimates put the figure at around 350,000 in the early 20th Century.

If that’s the case, and the IUCN population trajectory is accurate, fin whales look to hit 30% of their previous glory soon.

Researchers are finally starting to see congregations of huge numbers of fin whales gathering to feed, the largest since the ban on whaling being a group of around 300 spotted in their ancient feeding grounds in the Antarctic. 6

10. These are nutrient recyclers and affect climate change

Fin whales aren’t simply peaceful giants we should respect out of principle, they’re also critical to our ecosystem and even our climate. Their faeces provides the basis for all ocean life, by redistributing nutrients like iron, nitrogen and phosphorous back into the water.

Whale faeces has ten million times the amount of iron in it than the surrounding water. This iron forms the basis for phytoplankton blooms, which, like plants, capture CO2 and form the foundation of the food web for the fish that eat them.

Without whales, we lose more than a piece of ancient biological history. We lose several keystone species holding up the ecosystems we rely on, and perhaps one of the most efficient thermoregulatory. 7