Humpback whales are a type of baleen whale, which are carnivorous marine mammals who use special teeth to filter plankton into their mouth.

They are found all throughout the world except for the coldest High Arctic Ocean and areas like the Mediterranean Sea that are enclosed by land masses. 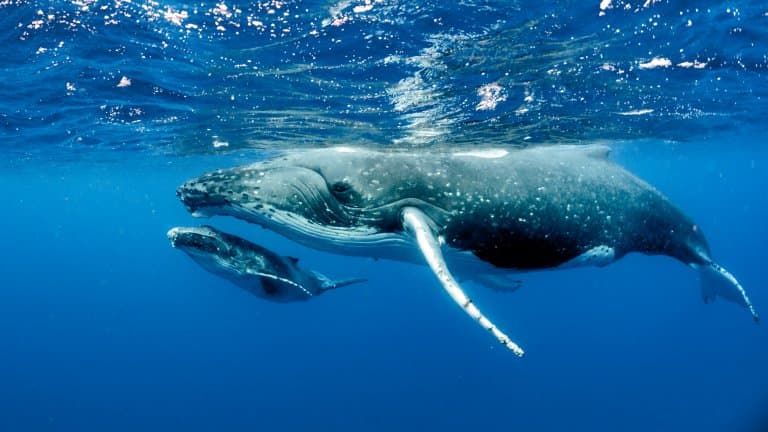 Humpback whales are one of the largest marine mammals, although they’re not the largest. They can grow up to 17 meters and weigh as much as 40 metric tons, with females being larger than their male counterparts.

They are members of the order Artiodactyla and family Balaenopteridae (or ‘Rorquals’), the largest group of Baleen whales, which includes the largest animal to ever have lived the Blue Whale, which can grow up to 30 meters in length and weigh as much as 200 metric tons.

A female humpback whale will have a calf around every two to three years, and each calf has a gestation period of about 12 months. Cows and bulls will mate with a variety of partners during their season rather than being monogamous.

They typically not considered to be very social – they often travel alone, but can migrate and feed in groups of transient whales.

Though they are carnivorous and eat a variety of plankton and small fish, humpback whales are known for being passive and generally gentle animals. However, because of their size, they may pose a threat to boats and swimmers who stray too close.

Despite their large size, humpback whales aren’t aggressive hunters. Rather than attacking their prey, which includes plankton and small fish, they’ll use a variety of tactics, such as bubbles, to help confuse and herd their food source so that they can use their specialized teeth to filter the small creatures into their mouth. 1

2. Their name comes from the distinctive hump on their back

The scientific name ‘Megaptera’, translates to ‘mega’ and ‘wings’ due to their large front flippers. 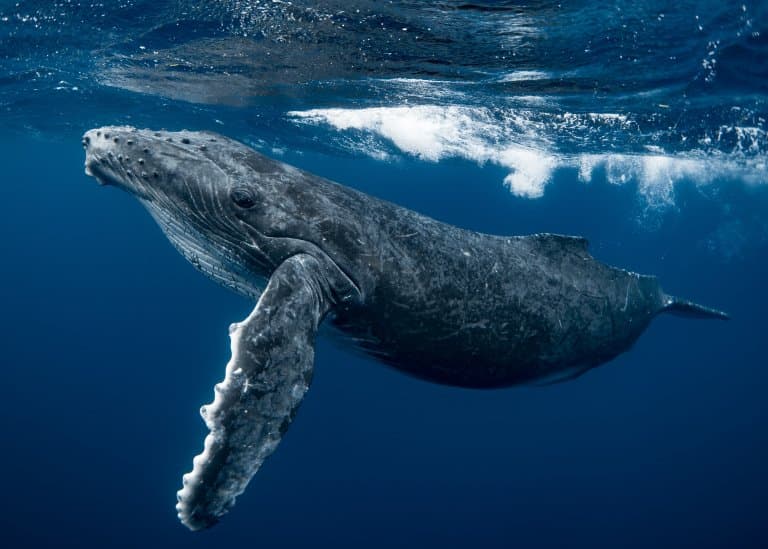 3. Humpback whales can migrate up to 16,000 kilometers each year

While you may be able to find humpback whales nearly anywhere in the world, that doesn’t mean that they stay in those environments year-round.

Typically, you’re more likely to find humpback whales in colder environments, such as the waters around Alaska. However, when it comes time to reproduce and give birth to their calves, humpback whales will favor warmer climates where there is more food, and it is safer for their calves.

While their front flippers can grow up to 16 feet (5 m), which is the largest appendage in the world. 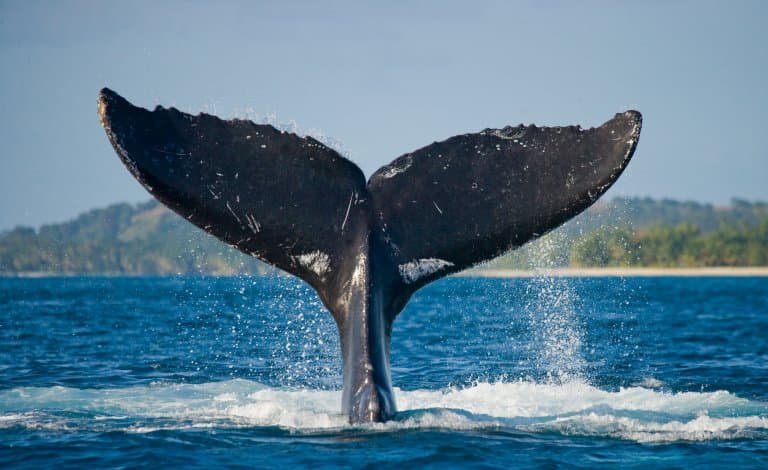 5. They were once on the brink of extinction

Today, the humpback whale population is healthy and thriving, although they still face certain concerns like pollution.

In the 19th and 20th centuries, commercial whaling nearly drove these gentle giants to extinction. In fact, their numbers had dwindled as low as 10,000. However, conservation acts and laws helped restore this species from critically endangered to least concern.

Now, the population of humpback whales in the world is around 80,000, although some sources cite this number as higher. 3

That’s a lot of fish! As their diet mainly includes krill, small fish and plankton.

7. Humpback whale calves are almost the same size as an elephant

Unless you’re regularly swimming with humpback whales – which is not recommended as you’ll see in #11 – it can be difficult to know just how big they are. After all, you won’t find one in an aquarium or zoo.

Each tubercle contains at least one stiff hair which are thought to act as motion detectors, that are able to pick up subtle vibrations from the water around them and even help them execute incredible underwater acrobatic displays. 4 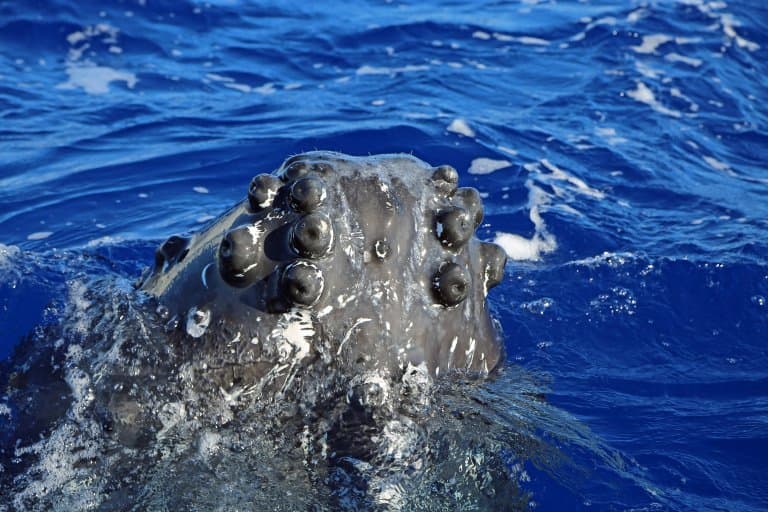 9. One population is entirely isolated

As you learned earlier, humpback whales can migrate nearly twenty thousand kilometers each and every year. However, this isn’t true for all populations. There is one population of humpback whales in the Arabian Sea that are completely isolated from others. 5

Because of their isolation, the Arabian Sea humpback whales are genetically distinct from their international counterparts – although they’re still considered to be in the same species. However, some scientists are leaning towards calling them their own subspecies, one that evolved nearly 70,000 years ago in the Indian Ocean!

10. They will occasionally confront orcas

There are very few predators in the ocean capable of preying upon the humpback whale. However, because orcas are skilled hunters who go after prey in groups, they have managed to become one of the humpback whale’s main predators.

That doesn’t mean that humpback whales are powerless however!

Even though orcas typically target calves, larger groups may attempt to hunt adult humpback whales. In a recent turn of events, however, a five-year-old humpback whale named Valiant confronted a pack of nine orcas – and succeeded! 6

Humpback whales are one of the gentlest carnivores you’ll find, especially in the ocean. Due to their diet, humans aren’t on their menu, and because of their nature, you won’t need to worry about them posing an aggressive threat.

However, humpback whales are one of the largest animals in the world. This means that, while incredibly rare, they have managed to kill a human – although it’s usually an accident. From breaching to swimming, humpback whales can hit boats, paddleboards, and even swimmers. While this isn’t an act of aggression, it can result in fatal injuries just because of how large and how strong the humpback whale is.

Males may typically sing complex and melodic songs with many verses and choruses from 5-30 mins at a time. Males from the same population sing the same song, while whales in different populations will sing different songs.

The purpose of these songs is much debated, but it’s speculated they might be to attract females, communicate with other whales on new wintering grounds, or echolcating to help locate other whales. 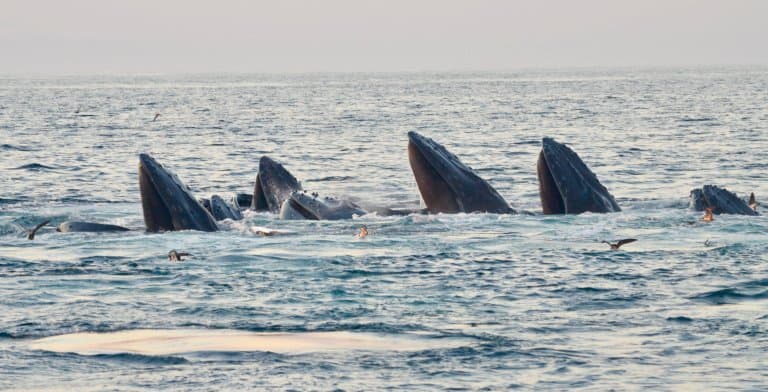 13. Humpback whales are known for breaching and tail slapping on the surface

They are one of the most popular whales for whale-watchers due to their active surface behaviours and acrobatics. ‘Breaching’ is when a whale leaps out of the water above the surface.

Each behaviour can communicate different things, such as excitement, play, irritation or helping to remove parasites from their skin.

These amazing behaviours have helped create a whole whale-watching industry in Hawaii worth over $20m each year. 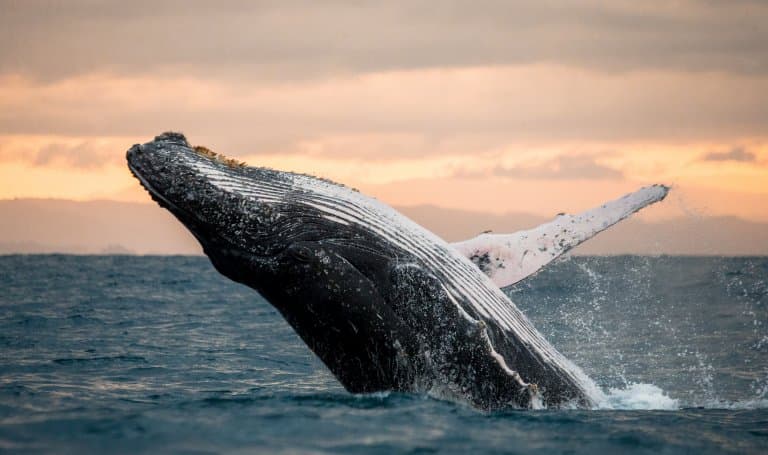