The emperor penguin (Aptenodytes forsteri) is a species of penguin that lives exclusively in Antarctica.

They are taller and heavier than other penguins, but their coloration is similar to that of their relative—the king penguin. As carnivores, emperor penguins feed on fish, squid, and krill (a shrimp-like crustacean). Living in Antarctica, much of their energy gained from feeding goes towards building up a thick layer of fat to keep themselves warm.

Like all penguins, they are flightless, with a streamlined body and wings that are flippers for swimming.

Due to climate change and global warming, ice shelves are breaking up and melting. As this species of penguin spends much of its time throughout the year on ice, their habitats are rapidly declining which has a profound impact on their population numbers.

The emperor penguin is classified as near threatened by the IUCN.

1. Emperor penguins are the largest of all penguins

On average, emperor penguins stand 45 inches tall, making them the largest living penguin in the world.

This, however, pales in comparison to the extinct colossus penguin (Palaeeudyptes klekowskii) that roamed Antarctica approximately 40 million years ago. Based on fossils, the giant bird would have been around 8 feet tall. 1

2. They are expert divers

As a matter of fact, emperor penguins are the deepest diving bird known to man.

They are capable of diving up to 1,850 feet below the surface and stay submerged for over 20 minutes. The longest recorded dive was almost 28 minutes long!

They have specially adapted haemoglobin and are able to ‘shut down’ non-essential organs to allow them to function at low oxygen levels. They also have solid (rather than ‘air filled’) bones, which allow them to withstand high pressures of up to 40 times the surface. 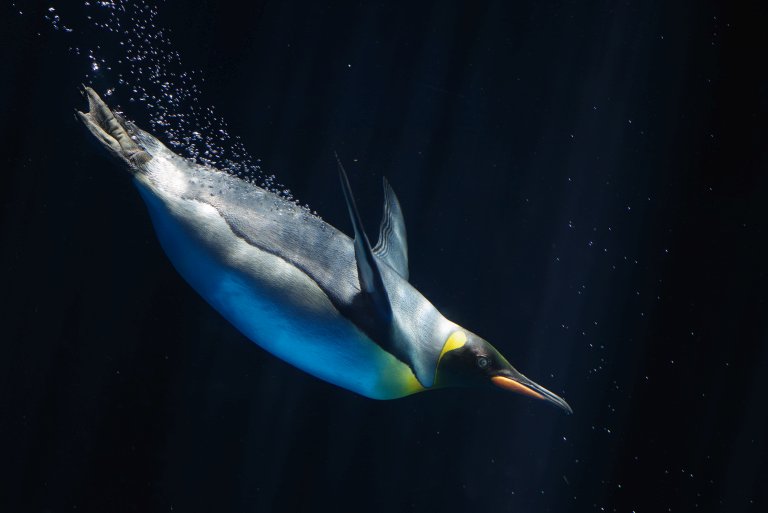 3. They live in massive groups

Emperor penguins live in groups called “colonies”. Each colony can be made up of 5,000 or more penguins at a time.

The emperor penguin colony at Coulman Island is reputedly the largest known, with over 25,000 penguins!

4. Emperor penguin colonies have been seen from space

Satellite technology has been used to identify and count emperor penguin colonies. There are thought to be around 54 individual colonies currently.

5. They toboggan to move around

The term “tobogganing” is used to describe the way penguins move across the ice by lying on their bellies and propelling themselves forward with their legs.

All penguins are capable of travelling by this method and the emperor penguin is no exception. They can also jump out of the water after a dive!

6. They trap air in their rear feathers to launch themselves out of the sea

This allows them to swim at twice their usual speed, and propel themselves back on the ice.

Fast ice is ice that is attached to land or ice shelves.

It is ocean water that has solidified to create sheets of solid ice for the penguins to rest on. Almost the entire breeding season occurs on these frozen platforms.

8. Males are responsible for incubation

They are the only species that will breed during the Antartic winter.

Once the egg is laid, female penguins venture off from the colony towards the sea in search of food. Their journeys can span 80–160 kilometres and they often do not return until the incubation period is over more than 60 days later.

In the meantime, males take on the role of incubating the egg, facing gale-force winds and extremely low temperatures that can fall below -50 °C. Only when the female returns, can the male go in search of food, which can be several hundred kilometres away!

9. Eggs are kept in brood pouches

To keep eggs warm during incubation, male emperor penguins balance the eggs on their feet and tuck them away in their brood pouches, an abdominal cavity covered in feathered skin.

After hatching, mothers take over and also carry their young in brood pouches. Without this protection, chicks can die within minutes in the freezing Antarctic temperatures. 2

10. They huddle for warmth

Members of the colony gather and shelter each other from the chilly temperatures and glacial climate of Antarctica. Penguins will huddle together to brace against strong winds and share body heat.

They will also rotate their positions so that members can take turns standing on the perimeter where the conditions are most grueling.

11. They sing and dance to attract mates

Breeding season begins in late March and early April. Males and females will engage in courtship rituals that include a coordinated collection of head swings, movements, chirps, and cries. 3

12. They can lose up to half of their body weight

Over the incubation period, males may lose up to half of their body weight as they cannot leave their eggs to feed. The return of their female mates is definitely a welcome one as the males can then travel to the sea to hunt.

Upon his return, the pair then cares for the chick together.

13. Chicks group together to mature

After approximately seven weeks, chicks will cluster together and form groups termed “creches”.

In these groups, the young penguins crowd together for warmth and easy supervision by their parents.

14. Parents recognize their chicks by their calls

Every penguin has a distinctive call that separates it from others. Adults will identify their offspring by their calls and only feed chicks that belong to them.

Emperor penguins will molt and shed their feathers each year, typically following the breeding season. As they go through this process, penguins can look unwell as their feathers fall out in patches.

The molt helps to replace worn out feathers that may not function as well anymore.

16. Leopard seals and orcas will hunt them

Despite the emperor penguins size and agility, leopard seals and orcas will prey on them when in the water, or near the waters edge.

While the total population was estimated at around 600,000 in 2009, global warning is a major concern for the emperor penguin. Some colonies have historically experienced a decline in 50% of birds during prolonged warmer periods.

A Woods Hole Oceanographic Institution study in 2009 which used mathmatical modeling to predict emperor penguin populations concluded that they could be extinct by 2100, due to global climate change.