The leopard seal is a carnivorous mammal known for its slender body and powerful jaws. Their exceptionally sharp teeth and impressive speed has allowed them to develop into one of the top predators in the Antarctic.

Sometimes called the sea leopard, these agile animals feast on penguins, other seabirds, and shellfish. They will sit patiently by the edge of ice shelves, waiting for the perfect opportunity to strike and snatch prey that are preparing to surface. 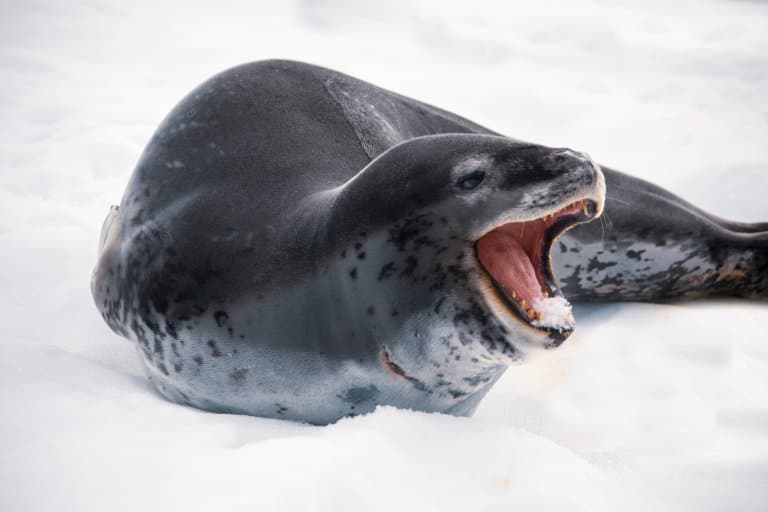 Leopard seals inhabit the Antarctic pack ice, and due to their remote location – not much is known about them and how they breed and reproduce.

They are the second largest species of seal (after the Southern elephant seal), and they have a long, muscular body and massive jaws with sharp teeth.

Leopard seals are currently protected from overhunting by international efforts as well as their remote habitats. Globally, there are approximately 250,000 – 400,000 leopard seals and the IUCN classifies them as ‘Least Concern‘.

However, with global warming, ice shelves are gradually disappearing. Habitat destruction may have a significant impact on leopard seal populations in years to come.

1. They do not have external ears

Like other “true seals”, leopard seals do not have external ear structures (i.e. pinnae). Instead, they have internal ear canals that connect with the environment via circular openings.

In terms of auditory abilities, their hearing is similar to that of humans. 1 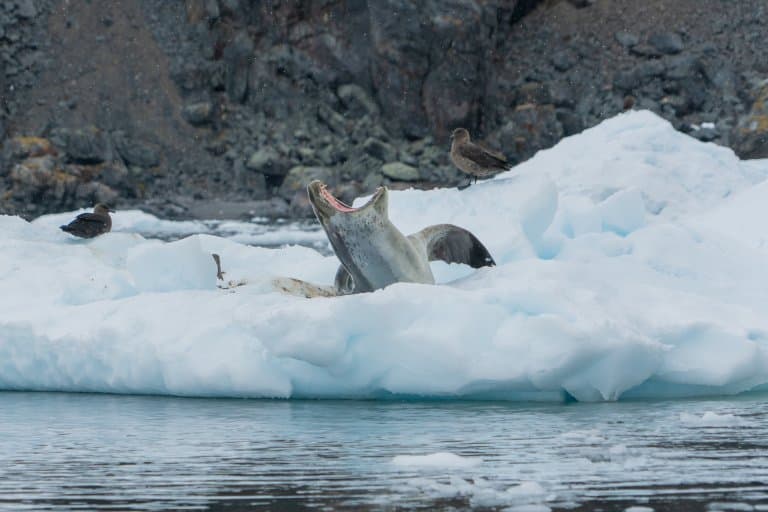 Pinnipeds are a group of marine mammals that possess flippers on their front and back limbs. There are 34 species that belong to this group, with leopard seals being one of them. 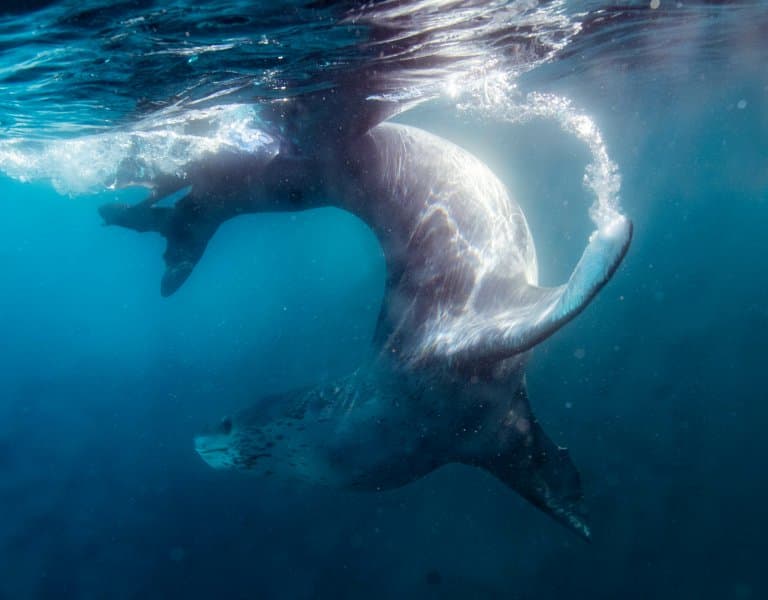 3. Of all seals, they have one of the most diverse diets

As mighty predators, leopard seals have one of the most varied diets among all seals.

It has been found feeding on krill, squid, penguins, and more. They are also one of the only seals known to eat other seals. 2

4. They smash their prey against the water to break it apart

Their front flippers make it difficult for leopard seals to hold onto their prey.

To help them break their meals down, they will hold onto their prey with their mouths and bring it above water, smashing it into the water’s surface. 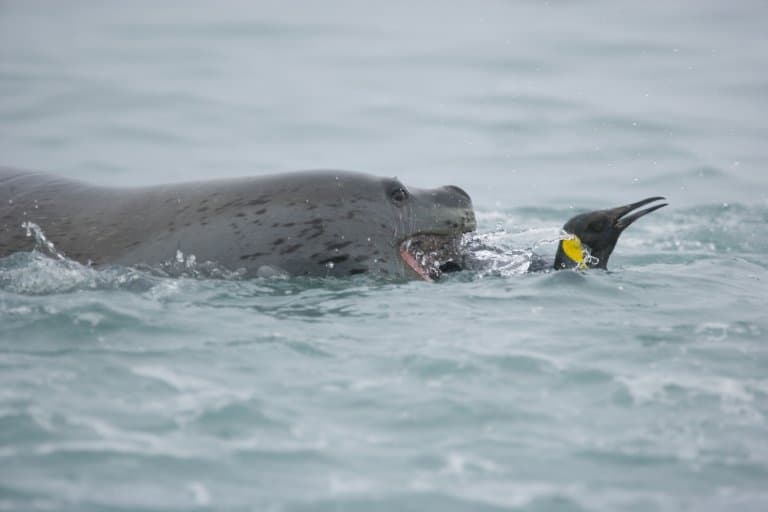 5. Their teeth allow them to filter out krill from ocean waters

After capturing krill in their mouths, leopard seals will expel ocean water from the sides of their jaws to avoid having to swallow it.

Their teeth are structured in such a way that their mouths act like sieves similar to that of whales. 3

6. They have multiple ways of keeping warm

In addition to their waterproof coats, leopard seals possess a thick layer of blubber that helps keep them warm. 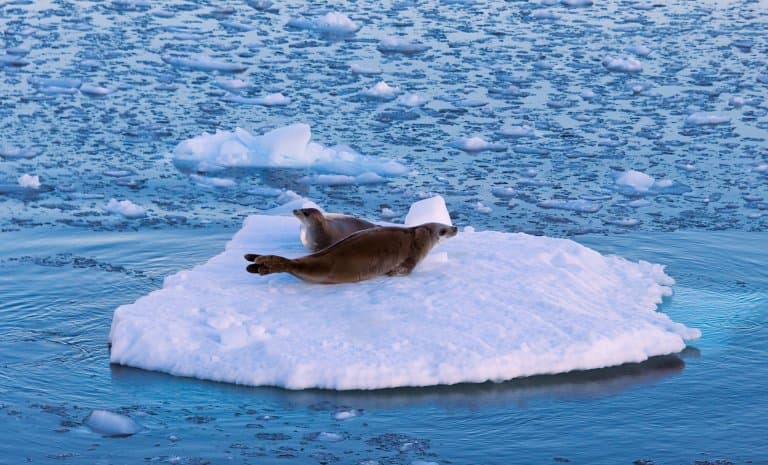 The gestation periods of leopard seals last approximately 10 months, after which, they give birth to a single pup. From their mother’s milk, pups can double in size within the first few months.

8. They only have one known predator

Due to their size and hunting capabilities, leopard seals are almost at the top of the food chain.

Their only known predator is killer whales.

9. Each male has a distinct song that they use to attract females

The mating season of leopard seals lasts a few months between late October and January.

To entice potential mates, males will generate loud vocalizations (also called “songs”). Each male has their own unique song that sets them apart from others.

10. Leopard seals are highly solitary and do not like to live in groups

Males and females will part soon after mating. In general, leopard seals will live alone or with their sole pup. They are territorial and will attempt to drive off any animal that gets too near.

There have been numerous accounts of leopard seal encounters with humans that have not ended pleasantly.

11. They have been known to feed humans

He believes the leopard seal was trying to feed him, and teach him how to feed himself.

12. Unlike other seals, they are not hunted commercially for their fur

Over the past few years, the demand for fur products has declined. Leopard seals, despite being named for their spotted appearance, have historically not been pursued for their coats.

This is a large reason for their stable numbers and conservation status.

13. They are the only seal that hunts warm-blooded prey

Other seals solely hunt on cold-blooded prey such as fish, shrimp, and krill.

Leopard seals, because of their size and ferociousness, are the only kind of seal that hunts warm-blooded prey such as other penguin, and seals.

14. There has only ever been one leopard seal-caused human fatality

In 2003, a British marine biologist, Kirsty Brown, was attacked and dragged underwater by a leopard seal. Unfortunately, she passed away from the incident.

It was an extremely surprising incident for local researchers and remains, to this day, the only death directly caused by a leopard seal.