The camel is an extremely resilient mammal that is recognized by its characteristic humps and fuzzy exterior.

They are sometimes referred to as ‘ships of the desert’, as they are capable of smoothly traversing across sands and dry environments. 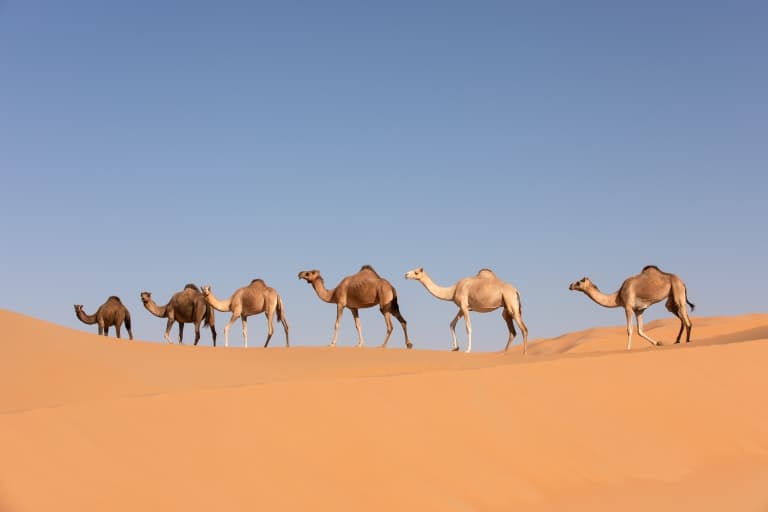 Camels are from the same family as ‘New World’ camelids, such as llama, alpaca, guanaco, and vicuña.

Over 3000 years ago, camels were domesticated and, today, they serve as a method of transport in several areas across the globe. They can move as fast as a horse and carry up to 600 pounds on their backs.

Camels have some incredible adaptations to live in the desert. To protect their toes from the hot sands, camels have fat pads on their two-toed feet. Despite living under scorching conditions, their coats can grow quite thick and serve as insulation from the heat.

Camels also possess a third clear eyelid, long eyelashes, bushy eyebrows and hairy ears to guard from sandstorms and gusts of wind. Their nostrils can close and prevent any dust from getting in.

Camels are herbivores and like to diet on grass, plants, grains, wheat and oats.

They have thick lips that allow them to eat prickly plants without hurting themselves. They will spend their days grazing and searching for food in their harsh desert surroundings.

While domesticated camel populations are thriving, Wild Bactrian camel are sadly critically endangered. They are hunted for sport and their meat, and they are suffering from habitat loss due to human activities, such as illegal mining in their region.

1. Their humps are not for storing water

When food is scarce, camels will eat to grow and store fat in their humps, which can then be used as a source of energy later on (when food is lacking). 1 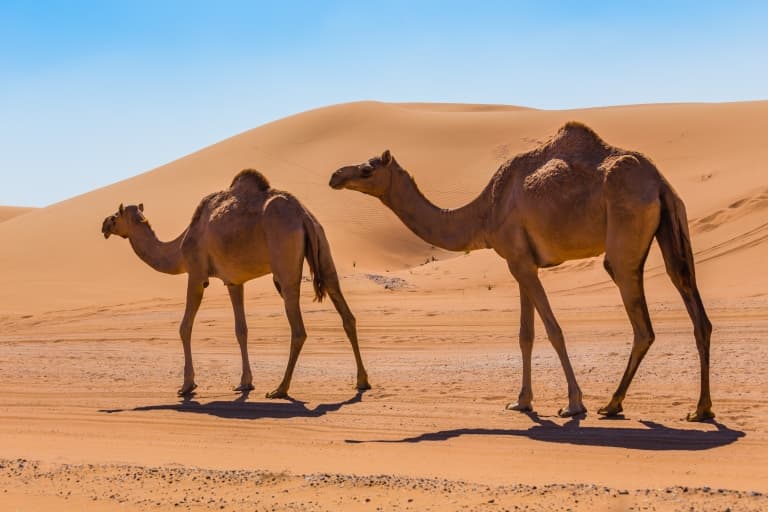 2. Camels can go for long stretches of time without food

Using their humps, camels can survive for four to five months without food.

As their fat stores are used up, their humps will flop over to the side.

3. Camels can be divided into three species

There are three species of camel – the Dromedary (known as the Arabian camel), the Bactrian (known as Asian camels) and the Wild Bactrian (which is a separate species).

Both the Dromedary and Bactrian camel species are domesticated.

Dromedary camels make up 90% of the world’s camels. To distinguish them from the others, count their humps—Bactrians have two humps while dromedaries have one. 2

4. They are born without humps

Newborn camels are called calves. They are born without humps and it is not until they are approximately 10 months old that their first humps begin to form.

Fast learners, calves learn how to walk within an hour of being born. They reach full maturity between the ages of three to seven depending on the species and whether the camel is male or female.

Camels engage in a specific type of gait called pacing.

This means that the legs on one side of the body move at the same time. Horses, giraffes, and elephants display a similar pacing walk. 3

6. Their blood cells are uniquely oval-shaped

Their unique structure helps encourage blood flow when water is scarce and the camel’s blood is thicker. The long side of their blood cells will travel in the same direction that their blood flows. 4

7. Camels can survive for weeks without drinking water

They have many adaptations that help them survive, one of which is specialised kidneys that produce highly concentrated urine, with very little water wasted.

When they do drink, they are able to gulp down 200 litres in under 3mins!

8. Their thick fur coats protect them from heat

Their coats actually act as insulation from the hot desert, meaning camels rarely ever sweat.

Shorn camels (those that have had their fur shaved) tend to sweat more than thick fur camels.

Their fur also helps them keep warm in colder regions and at night.

9. Their milk is very nutritious!

In India, camel milk is growing in popularity due to its nutrition properties.

According to dieticians, it is low in sugar and also contains a high level of beneficial vitamins and minerals. 5 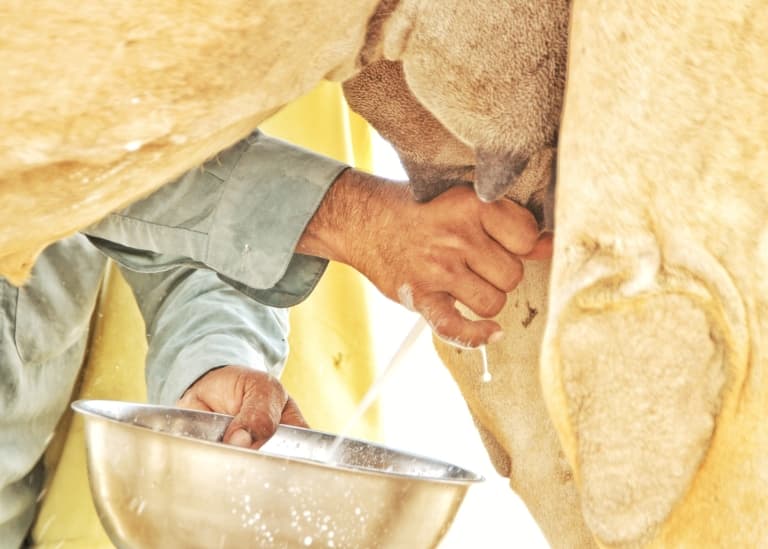 10. Camels can sleep standing up.

While they usually sleep in a kneeling position with legs folded under their body and head resting on the ground, camels can sleep when standing.

In the wild this helps keep them safe from predators.

11. Camel herding is on the decline

In parts of India, the development of new roads has brought about an increased use of motor vehicles over the past few decades.

Fewer groups are using camels as a mode of transportation, and so, there has been a reduced demand, impacting local herding industries—many of which are family-run businesses.

That’s approx. the weight of two grown men, although they are often used to transport goods as well.

It is true that camels spit when troubled or when they feel threatened.

The “spit” is actually regurgitated stomach contents. A camel will fill its cheeks with the contents and eject it at the object or animal that is scaring it.

14. Their coats change based on the environment

Bactrian camels that live in the Gobi Desert and Mongolia have bushy coats that thicken up in the winter to help insulate against freezing temperatures.

Then, in the summer, these camels shed their coats.

Camels can endure an exceptionally wide range of temperatures, from minus 29 °C to positive 50 °C.

Ruminants are animals, such as cows, that regurgitate food from their stomachs and chew it to further break it down.

This may be because the majority of populations are domesticated. Each herd will have an alpha male at the top of its hierarchal chain. 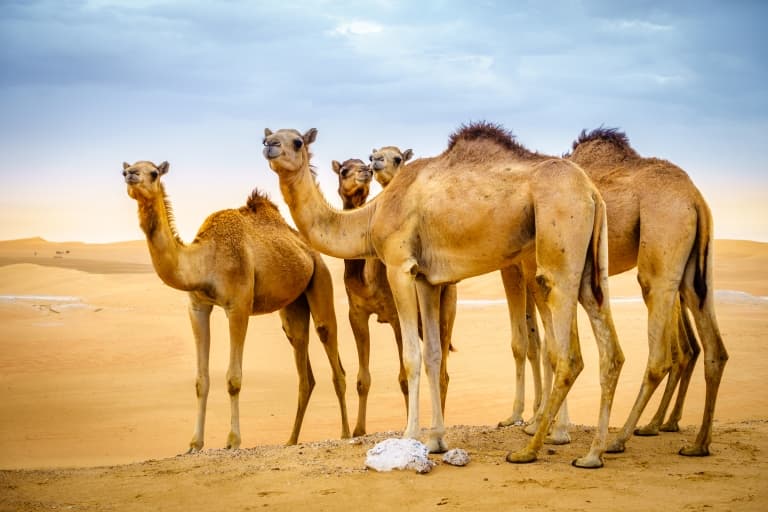 17. They are great communicators

Along with a variety of verbal cues, including groans, moans, bleats, and roars, camels communicate through body cues.

For example, their ears will face forwards when they are at high alert.

Camels are diurnal, meaning they are most active during the daytime.

When the sun is out, they employ their excellent foraging skills to find food in the desert. Their lips are extremely dextrous and allow them to isolate and pick off vegetation (leaves and grasses).

19. They mate sitting down

Camels mate with both the male and female sitting down, with the male behind.

In fact, they are the only hooved mammal known in the world to sit while mating.

20. Their are under 1,000 Wild Bactrian Camel alive today

It’s estimated there are just 650 in China and 450 in Mongolia with continued habitat loss and illegal hunting as the main causes.