Bull sharks are believed to be one of the most aggressive sharks on the planet, alongside great white sharks and tiger sharks.

They are found throughout the warm oceans of the world and depending on where they are found, they can have different common names such as Zambezi shark, river shark and Nicaragua shark.

The name ‘bull shark’ stems from their blunt snout, stocky shape and the unique way in which they like to hunt prey. 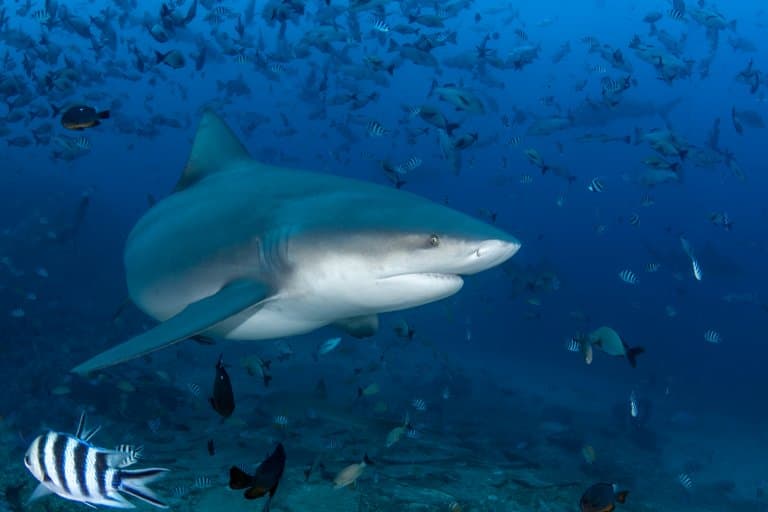 Bull sharks are what is known as a requiem shark, which means they are migratory, give birth to live young and live in warm seas.

They span the oceans of the world and prefer shallower depths to move in. This can make them particularly susceptible to coming into contact with humans, as these are the bodies of water that humans like to frequent also for activities such as swimming and fishing.

Historically there have been many reports of bull sharks attacking humans. They can hunt in murky waters and thus can be more difficult to see and avoid. These sharks do not specifically prey on humans, they just inhabit the same areas that humans like to hang out in also.

Most sharks are found in marine environments as their bodies cannot tolerate freshwater, however the bull shark has adapted in a way that it can regulate the amount of salt in its system.

This allows it to move into brackish (slightly salty water) and more freshwater environments, such as rivers, lakes and estuaries. This is very helpful for the bull shark, as it can prey on animals that are found in a variety of aquatic surroundings, where other sharks cannot.

When it comes to male and female bull sharks the females are larger. Females averaging 2.4 metres have been observed, where males on average have been seen up to 2.2 metres. There have been sightings of bull sharks reaching over 3 metres, however this is rarer.

For its size a bull shark has a large bite force, and this combined with its speed and stocky build make for a formidable predator. Bull sharks are not particularly fussy with food either. They feed on many types of fish, stingray, crustacean, dolphin and even other smaller bull sharks if given the chance. They are opportunistic feeders and will feed on whatever is in close proximity.

Bull sharks are apex predators and have few natural hunters. When they are young they are more vulnerable and observations of tiger sharks eating juvenile bull sharks have been reported.

The biggest threat to bull sharks are humans. Bull sharks are often hunted for different parts of their body, with people eating their meat and using their hide.

Oil from their livers is also extracted and used. Human development in coastal waters could also impact bull shark numbers and disrupt their movements and distribution. Linked to these reasons they are listed as ‘Vulnerable’ by the ICUN.

Bull sharks have wide, blunt short shouts and like to make the most of these when they hunt and have a special hunting strategy.

They have been observed pushing their heads at speed into their prey. This has partly contributed to their name, ‘bull shark’, similar to how a bull while run and head-butt a threat.

This either stuns their victim, making it easier to continue attacking, or kills the prey outright. They have been seen to repeat this technique until their prey cannot escape. 1

2) Bull sharks can work in a team for food

In general bull sharks are solitary hunters, but have been observed working in conjunction with another to help make capturing their prey easier.

Bull sharks have evolved to be able to regulate their internal salt levels. This is linked to adaptations particularly with regard to their kidneys, liver, renal glands and gills.

They can vary the amount of salt that they excrete from their bodies depending on the body of water they are in. 2

Juvenile bull sharks are born in more freshwater environments and as they get older move to more saltwater conditions.

It is believed that as bull sharks grow, their tolerance for more saline environments increases.

5) Bull sharks and crocodiles aren’t the best of friends

There have been sightings of crocodiles preying upon bull sharks in both Australia and Africa.

Female bull sharks will move to more freshwater environments to give birth to her young, which develop in individual yolk-sacs inside her body.

These are born live and fully developed.

The amount of young (or pups) born can be up to 12 and are born with their tails first. Once they are born they are left to fend for themselves.

Bull sharks can adapt the way they digest food so that when food sources are less plentiful, they slow down their digestion to help avoid starvation. 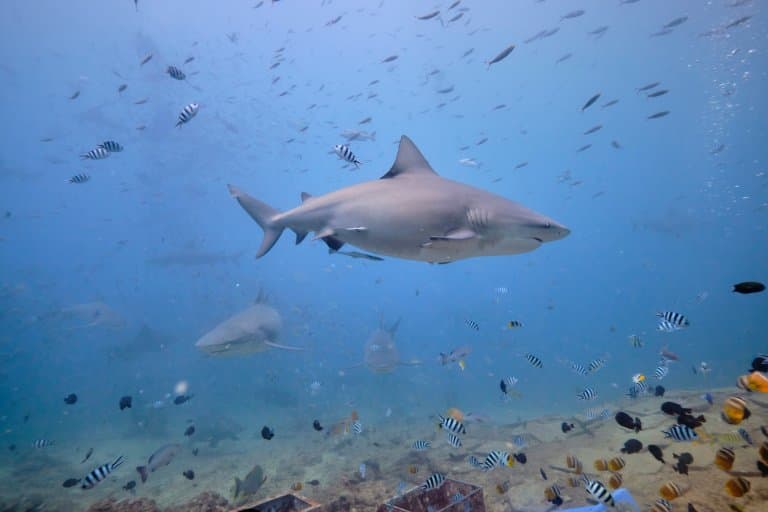 8) Bull sharks make themselves sick to distract their predator

If a bull shark is being attacked it will sometimes regurgitate its prey in the hope that its attacker will be more tempted by this, rather than the bull shark itself.

9) Bull sharks have a fish friend

Some types of remora fish have a mutual relationship with the bull shark. These fish like to eat parasites from different parts of the shark’s body.

This means the fish gets food and the shark gets clean, which is great for both parties. 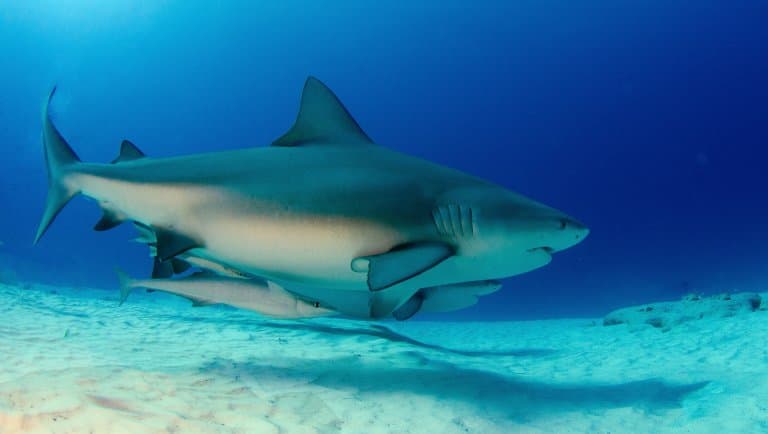 10) Male bull sharks like a bit of a bite

During mating, the male bull shark often bites the pectoral and pelvic fins of the female. This can be seen on the females through scarring.

Scars aren’t usually found on the females head however.

11) It takes a long time for pups to be born

Gestation usually lasts for between 10-11 months. As this is a relatively long time, bull sharks will usually only re-produce every two years.

Bull sharks are often not found in aquariums as they are thought to be too aggressive and attack/kill everything else in the tank!

13) They have been found in the Mississippi River

As far up the river as Alton, in Illinois. This is an increduble 1,100 kilometres (700 miles) from the ocean, and highlights how they can come into greater contact with humans.

Their are also populations in the Brisbane river, Amazon river, near Sydney harbour and many other canals and lakes.

Behind the great white shark and the tiger shark.

However, larger-sized bull sharks are probably responsible for many more near-shore shark attacks, including many bites attributed to other species. Fortunately, humans are still more likely to be struck by lightning that be attacked by a shark.3