The frigid polar waters are home to some strange creatures. Somehow things just work differently there. As alien as the arctic is to most mammals, some have adapted incredibly to the hostility of the environment, and these adaptations have led to some peculiar exceptions to many rules.

The bowhead whale is one such exception. They are named after their huge triangular-shaped skull, which they use to break through arctic ice to breath. 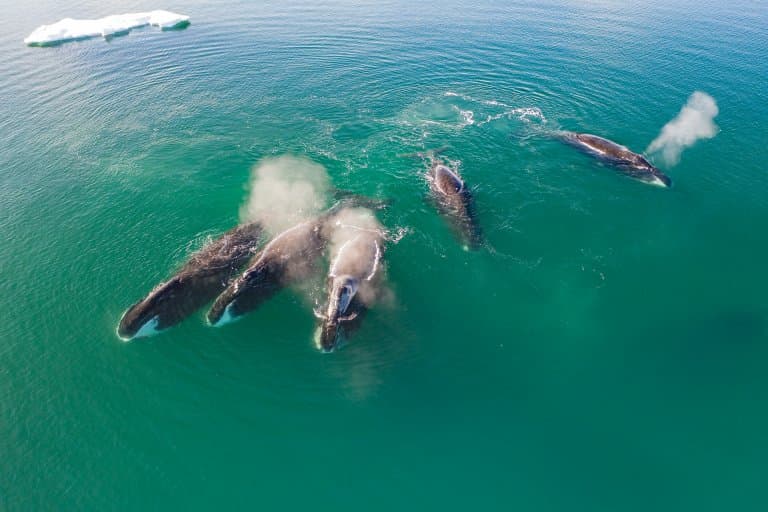 The bowhead whale are also sometimes called the arctic whale, the greenland right whale, the polar whale, and in Russia they are simply called the Russian whale. They are the only baleen whale to spend their entire lives in arctic waters.

They are ancient, vocal guardians of the frosty North. Once hunted almost to extinction, they’re on their way back thanks to modern conservation interventions, and have plenty of secrets still to discover.

Bowhead whales are large in size with powerful bodies. They grow up to around 18m in length and weigh up to 80 tons. Larger individuals have been claimed to be caught growing up to 25m in length.

They’re vocal, they’re playful, and they likely have a lot of stories to tell on account of just how long they can live. They’re well adapted to their freezing world with thick blubber and enormous baleen plates that they use to filter and diet on zooplankton.

While the global population is doing relatively well now, they are still in trouble, and threatened by a lot of the fallout from the fishing industry, among other things.

1. They’re thought to be the oldest-living mammals

In 1981, whalers found a harpoon tip that dated back 150 years. This harpoon tip had just come out of a fresh bowhead carcass, suggesting that it had entered the animal well over a century ago, and had been carried inside its blubber ever since.

From here, it’s been speculated that these arctic giants are capable of living to at least 200 years old, a lifespan that exceeds any other known mammal. 1 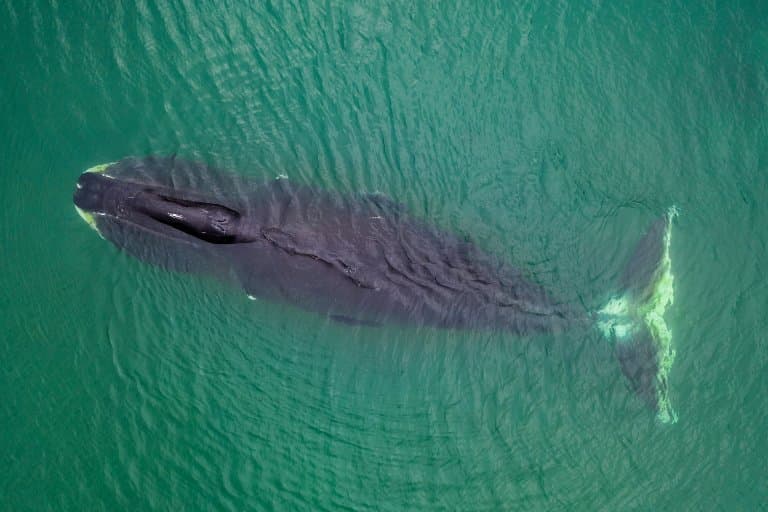 Like most large artic animals, these ancient behemoths swim slowly and are covered in thick blubber.

So, they’re easy to chase, and float when they’re killed. This made them a prime target for the whaling industry at the turn of the 19th century.

Commercial whaling reduced their populations down from an estimated 50,000 to fewer than 3,000 by the time they were effectively protected in the 1920s.

While whaling is dying out, in many contexts you’ll see populations of whales referred to as ‘stock’ – which seems quite disrespectful, and harks back to when they were viewed simply as a commodity.

3. They can be identified by their scars

Bowheads live in areas where it’s so cold the sea freezes over. Being mammals, they need to access the surface to breathe, and they do this by using their immense mass to break through the sea ice.

This gives them a unique set of scars on their backs and their huge heads, which researchers can use to identify them. Other scars come from their only ocean predator, and some of the mess left behind from commercial fishing. 2

These enormous heads work as battering rams to get through the thick sea ice. With this method, according to arctic tribespeople, they can push through ice as thick as 60cm (2ft)! 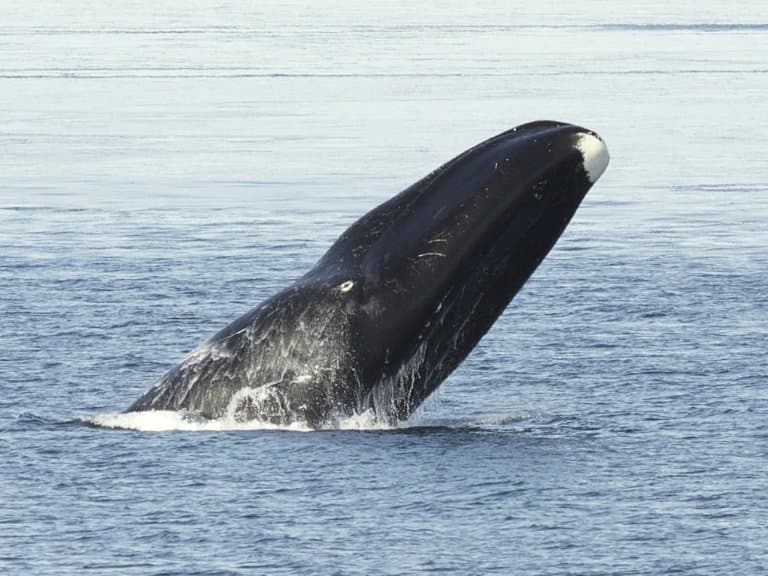 5. Bowheads have the largest mouth of any animal

Attached to the maxilla in this massive head is a set of baleen plates; keratinous filaments that are used to filter out plankton from huge gulps of seawater.

They have the largest mouth of any animal containing the largest baleen plates of any whale, up to 4 meters (13ft) long!

Bowheads feed by swimming forward with its mouth wide open filtering for zooplankton, cnidarians, ctenophores, molluscs, arthropods and many other crustaceans.

7. Their blubber can be nearly 50cm thick

As well as providing buoyancy, the blubber on bowheads is great for keeping them warm in the cold, arctic waters. This blubber is thicker than on any other whale and can reach well over a foot thick.

It’s another reason they were hunted relentlessly during the golden age of whaling. The blubber was used for machine lube and lamp oils.

They have paired blowholes at the highest point of their head, and they can blow water from them 20 feet (6.1m) into the air after diving. 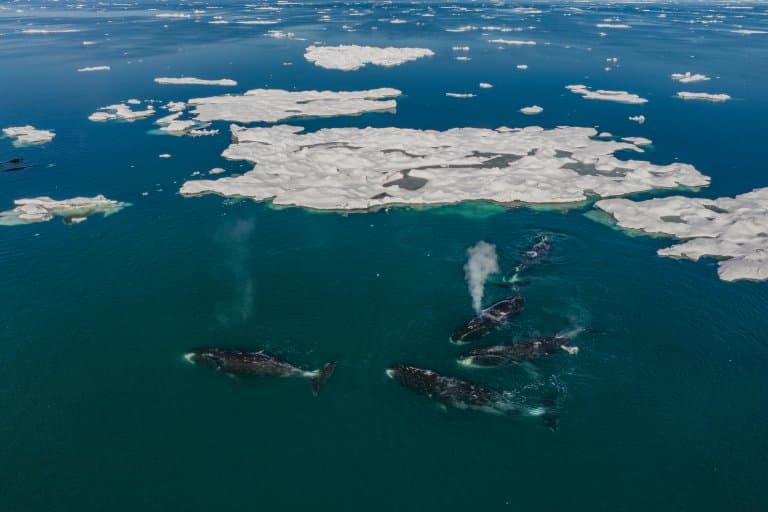 9. Bowheads don’t have a dorsal fin

Unlike most cetaceans, but similar to other arctic whales such as the narwhal and beluga whale, bowheads don’t have a dorsal fin.

This helps them in a couple of ways, it means they can swim under ice sheets more efficiently without bashing themselves, and it reduces their surface area, which helps prevent heat loss in their freezing arctic habitat.

10. They have complex vocalisations

Bowheads not only talk more than other baleen whales, they also have a lot more to say. Both complexity and amount of vocalisations are higher in bowheads than their cousins.

Their navigation calls are referred to as “intense”; calls associated with the springtime migrations are low-frequency sweeps, and a cacophony of highly complex and variable songs are heard during mating season. 3 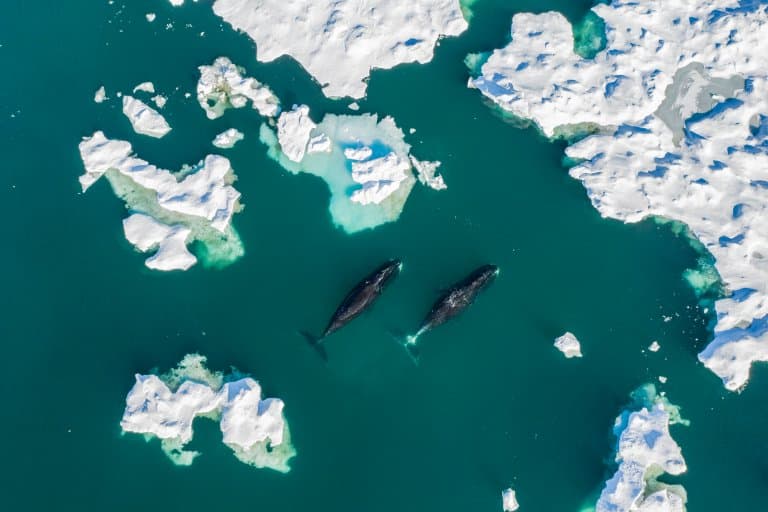 Not much in the ocean dares to look a killer whale in the eye, and bowheads are no exception. Their migratory patterns follow the more inconspicuous coastal paths to reduce exposure, and mothers with young tend to hide in deeper ice to avoid attacks.

Still, scars from roaming pods of Orca are often present on the backs of bowheads.

Though you might not be able to tell at a glance, these whales have close personal relationships with one another. They spread out over long distances, communicating with loud calls, and when there’s nothing else to do, they come together and play.

Some of the close social interactions have been described as pushing, chasing and caressing. Bowhead whales will also breach, which is when they leap out of the water for fun. They are capable of breaching entirely out of the water!

Adolescents apparently have some pretty boisterous sex lives too, with a lot of tail-slapping, breaching and screaming.

An incredible 12% of the individuals in the Western Arctic populations have scars from fishing nets on them or are seen with nets still attached. And those are only the ones who survive. Commercial fishing is one of the most destructive acts of mankind, and no ocean-dwelling animal is safe from it.

Up to a million tons of fishing gear is lost or thrown into the ocean every year, and it doesn’t break down. Instead, it floats around in the ocean – nearly half of the Great Pacific Garbage Patch is related to fishing. Many, many ocean mammals succumb to damage and death from these practices.

Other threats come from collisions with boats and military-grade sonar, which interferes with their ability to navigate, and in some cases is so powerful it ruptures their ears. 4