The frigid waters of the Antarc are home to many weird and wonderful animals, not least the smiling, hornless cousin of the Arctic Narwhal.

This may well be the happiest-looking member of the cetacean order: the beluga whale. 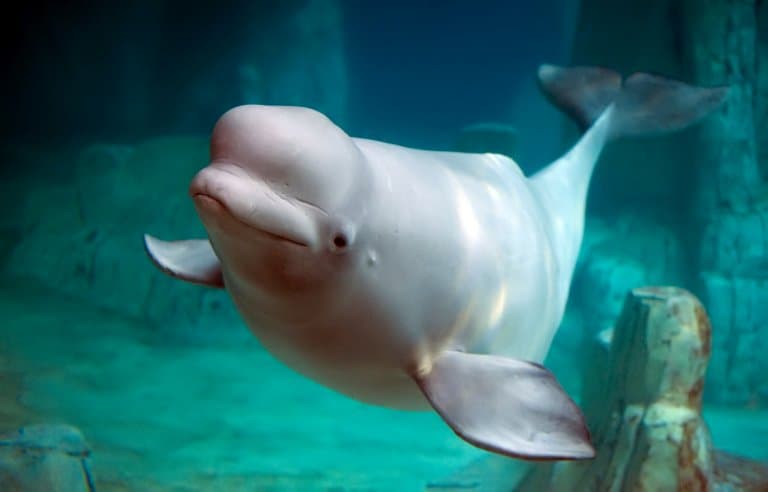 This charming, brilliant white, bubble-headed whale has a perpetual grin. Possibly because despite humans’ best efforts, their global populations seem to be doing relatively well.

The majority of belugas live in the Arctic Ocean and areas around Alaska, Canada, Greenland, Scandinavia and Russia. Their population is thought to be around 200,000 in total worldwide.

They are sometimes known as the white whale for obvious reasons, as well as the ‘sea canary’ due to its high pitched calls, and melonhead, due to its, erm, melon-shaped head.

They are highly social creatures, live in pods and hunt together. They are opportunistic feeders and like to diet on cod, halibut, salmon, shrimp, squid, octopus and more.

Unfortunately, numerous local populations are threatened with extinction, but despite this, the IUCN considers them pretty safe and ‘least concern‘.

However, there’s more to their situation than meets the eye…

1. They appear to always be grining

Beluga whales always appear to have a constant smile on their face, making them great for selfies. 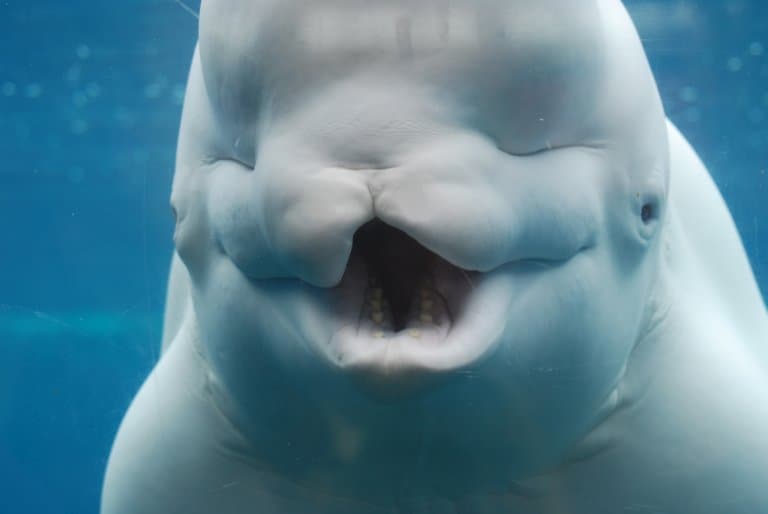 Contrary to the name, beluga caviar actually comes from a sturgeon fish. This is fortunate for the whale, as the fish has consequently been hunted to near extinction.

As a mammal, beluga whales have microscopic eggs that aren’t large or plentiful enough to spread on a cracker and probably wouldn’t taste right even if you could.

The common name for both comes from the Russian root for ‘white’, which describes both the fish and the whale quite succinctly.

3. Their talk through a melon

As with dolphins and other toothed whales, the beluga has a ‘melon’; a fatty protrusion in the head that is thought to modify soundwaves to produce a range of vocalisations.

This melon is part of the nasal passage and all toothed whales use it – or something similar to it – to call to one another as well as a means of echolocation. 1 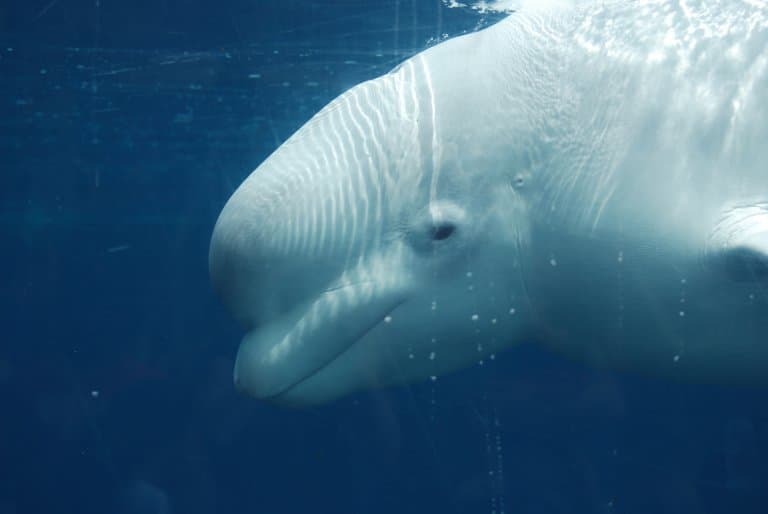 Being a predominantly Arctic species, belugas require quite a thick layer of blubber to survive. In fact, they’re around 40% fat, which pushes them well into the range that humans would be considered obese.

Of course, belugas wear it better than we do, and it isn’t such a dangerous condition for an arctic whale, but it does go to show how chilly it must get up there.

Instead, they have a dorsal ridge, which is believed to be an adaptation for under-ice conditions or potentially another way of preserving heat.

The genus name of the species, ‘apterus’ is actually the Greek for ‘wingless’, in reference to their lack of a dorsal fin. 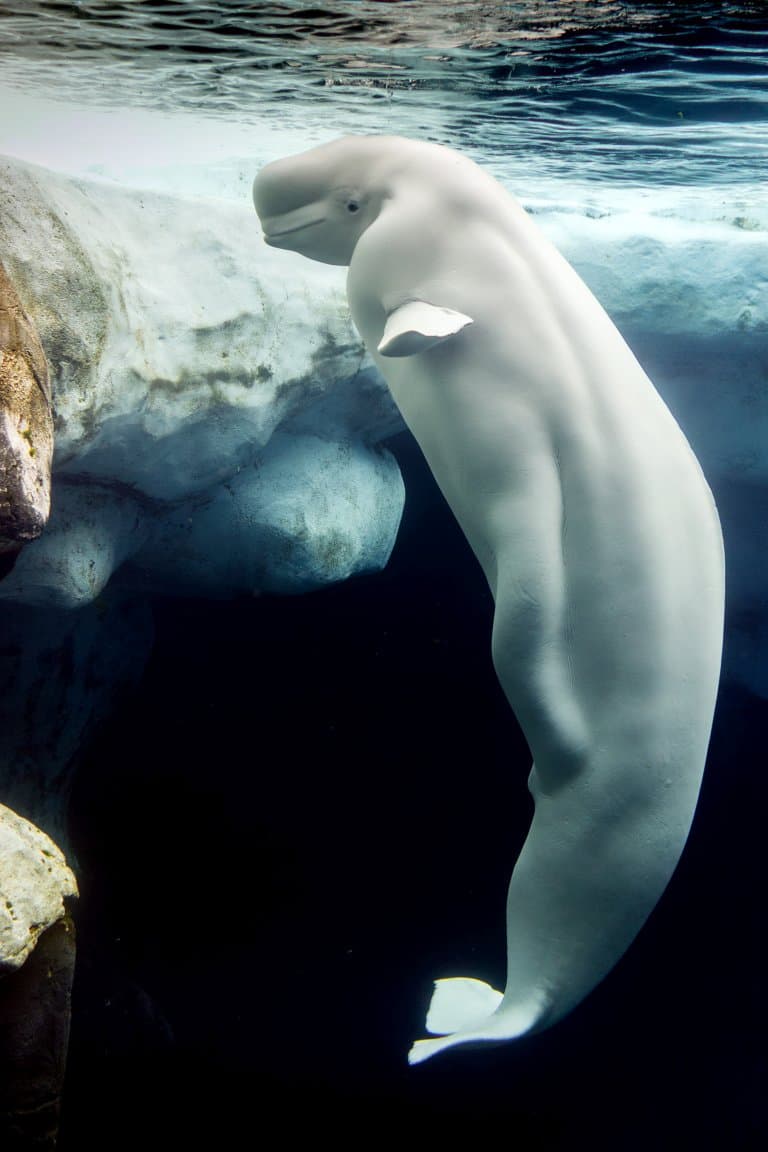 Belugas have been known to rub themselves on rocks and stones to remove their outer layer of skin. This is quite unusual for a mammal, and something we typically associate with snakes or insects.

However, it seems to be in response to a change in water conditions. When these whales enter warmer, more brackish waters, they shed a thick layer of skin, decreasing the thickness of their outer layer.

This is probably a response to the warmer temperatures and functions much like taking off a jacket when the weather warms up, but it’s not entirely clear yet why this happens. 2

7. Their pods can be enormous

Beluga pods have a very wide range in terms of their size. They can comprise just a couple of whales, or they can be several hundred whales strong.

The average is about ten, or a range of between 2 and 25 individuals, but some groups have been spotted with more than 2000 individuals.

8. They can swim up rivers

Belugas are predominantly circumpolar whales, that like to hang around the arctic in most cases. However, some populations migrate on epic journeys of discovery, up to 6,000km long, and one population spends the Summer in the Mackenzie River in Canada.

This ability to move between fresh and saltwater is quite a feat but has in the past led to potential confusion in the whales, as in one case where it’s thought a beluga swam up the Thames and was possibly lost and in distress. These navigational problems have become more common with the increase in human activity in the sea, which leads us sadly to our next fact.

9. Belugas can imitate and speak in an almost human voice

Incredibly they can mimic the pattern of human speech, which is several octaves lower than typical whale calls.

One captive Beluga copied a get out of the water order divers had been using on an underwater communication system, causing the divers to surface!

Aside from being directly hunted by human subsistence hunters, like many whales, belugas suffer unfathomable torture as a result of underwater noises. Sound travels around five times faster in seawater than it does in air, and its energy is conserved for greater distances.

When navy vessels test out their powerful sonar, whales have been witnessed diving in a panic, bleeding from their eyes and ears, and even beaching themselves to get away from the horrific noise. This terrible impact is not well documented and is mostly kept quiet by the military, but raises questions as to the sacrifices that are appropriate in the name of national security.

It’s not just sonar, either. The noise generated by fishing vessels in the area where Belugas live and hunt affects their ability to hear each other and communicate. This has been established as a significant threat to local endangered populations. 3 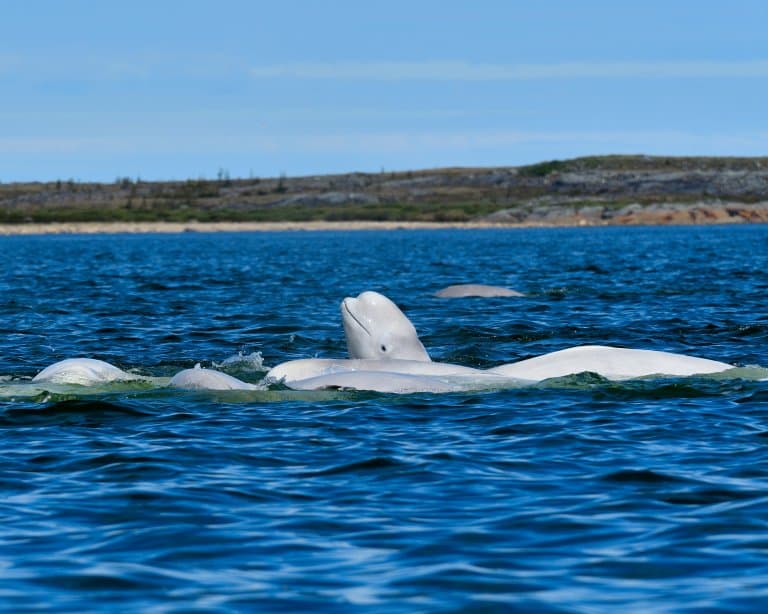 Baby belugas are unique among cetaceans, in that they rapidly increase their levels of myoglobin before their first birthday. This protein binds with oxygen, meaning that higher levels of it allow the baby to hold its breath for longer.

As a result of this, baby belugas can soon dive almost as deep and stay under the ice for almost as long as their parents. By the time they’re 14 months old, they have adult levels of myoglobin. In other cetaceans, this adaptation typically takes 2 to 3 years.

12. They are hunted unsustainably

Although they’re considered a species of least concern by the IUCN, beluga populations in some areas are critically endangered. Global populations tell only one side of the story, and with various populations of beluga being so isolated, a population decline is unlikely to be replenished by individuals from outside.

While there are moratoria on hunting Beluga in some areas, such as Cook Island in Alaska, many populations are still being hunted at unsustainable levels. In 2014, The Environmental Investigation Agency EIA proposed a ten-year moratorium on Arctic shipping increases, stating that of the 29 beluga populations, 15 are already depleted.

Unfortunately, the moratorium was rejected. 4 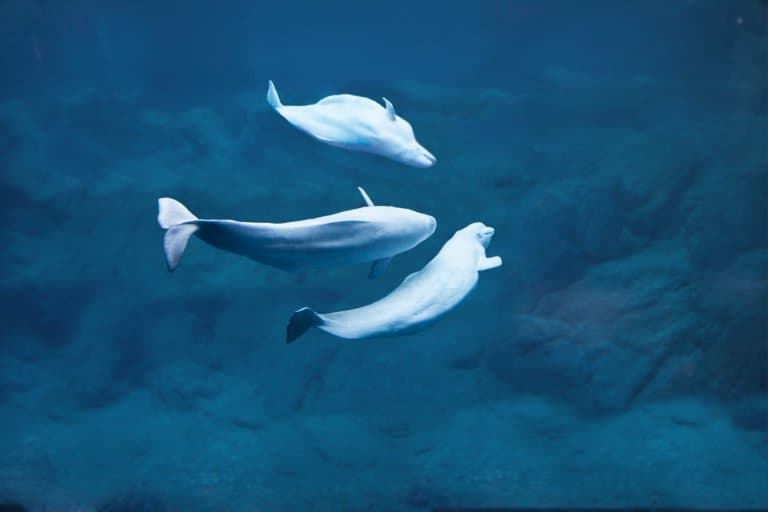