The beaver is the largest rodent in North America and Europe and is a formidable beast. It directs the streams, controls the woodland, and provides for a spectacular diversity of organisms.

These animals are exceptionally well adapted to their watery habitat and they occupy it well. Webbed feet, a flattened paddle-like tail, and elevated eyes and ears to see and hear while submerged are only a handful of the plethora of specialisations beavers exhibit. 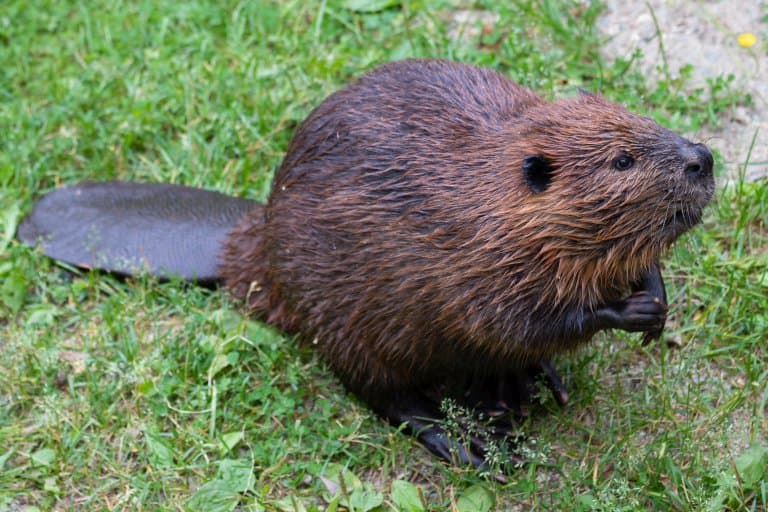 There were perhaps over 400,000,000 beavers in North America and at least one million in Europe before the fur trade decimated populations. Before that even, numerous species in several genera roamed the earth.

Only two species remain, and many populations within these species were hunted to extinction too. However, thankfully global populations are recovering and are currently listed as Least Concern.

The two species of beaver are the North American beaver and the Eurasian beaver. The species are similar, but differ in the shape of their tail, head and color.

They inhabit freshwaster ecosystems, such as rivers, lakes, streams and ponds where they build dams and lodges using tree branches, vegetation, rocks and mud. The lodge is used as shelter and flowing water is impounded by the dam to create a pond for them to live in. Beavers live in monogamous pairs with their young.

Beavers are herbivorous and they diet on leaves, roots, herbs, grasses and bark. They store food for winter, by pilling up wood in the pond of their dams.

Beavers are a very important species to local biodiversity, and their dams provide many services. As these populations rebound from the devastation of the last several hundred years, we have yet to witness the full and remarkable effect of these special rodents on our modern, natural world.

1. Beavers are the second-largest living rodents after the capybaras

Beavers can grow up to 120cm in length (1.2m), their tail can measure as long as 50cm and they can weigh nearly 30kg – which makes them a little smaller than the capybara which can reach 135cm.

They have small, but powerful builds that allow them to pull heavy loads and can carry objects while on their hind legs. 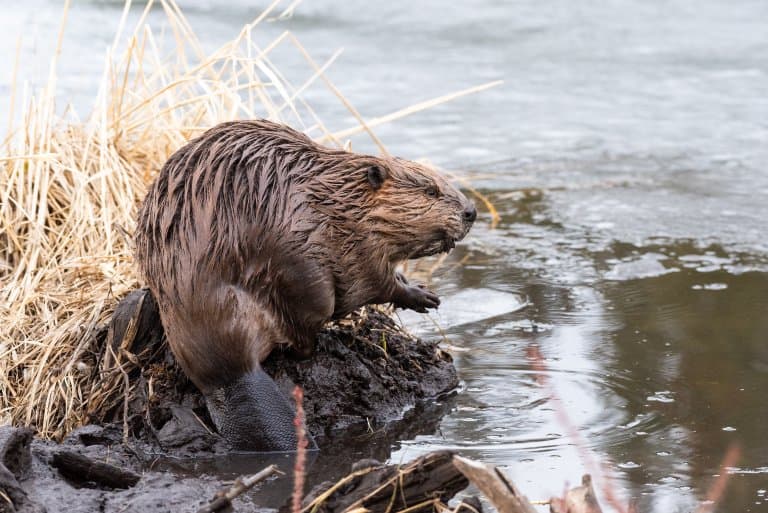 But not the kind you’ve probably heard of. The back end of a beaver is home to a small arsenal of glands, two of which are known as castor sacks.

These glands secrete a thick brown fluid that smells like vanilla. Yes, beaver bum smells good. So good, in fact, that this butt juice has been used in FDA-approved vanilla flavourings for food, as well as perfume.

So, chances are, you’ve eaten some. 1

3. They are ecosystem engineers

And in almost every sense of the word! Beavers cause enormous damage to their environment by constructing the dams they use to create their living areas.

Beavers are responsible for an impressive level of biodiversity in the areas they live, increasing plant and animal species diversity both on the land and in the water.

You might have seen eye-catching headlines about beavers having metal teeth, and that’s sort of true.

Though it isn’t all that interesting when you consider that by this logic, you do, too. Calcium is a metal that’s found in your teeth and bones, and it helps keep them strong, but if you wanted to gnaw down a tree with those teeth you’d probably make use of something even stronger than that.

And beavers do! Their teeth contain iron, which is why when they chew on trees, their teeth don’t break, while yours do. It’s also why they’re the colour that they are: a dark, rusty brown.

As a rodent, beavers’ teeth never stop growing, so these need some pretty hard things to gnaw on to keep them in shape. This process also ensures that they stay sharp forever.

Interestingly, a beaver’s lips can close behind their teeth, allowing them to chew when submerged. 2 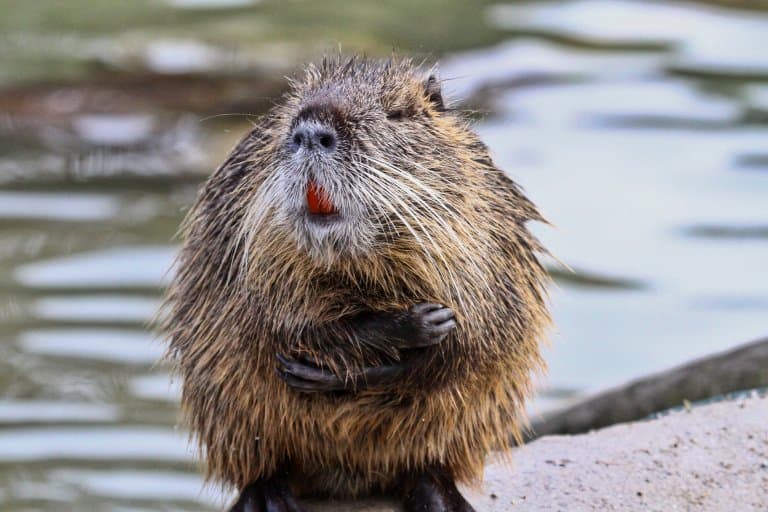 5. Beavers can chew down large trees

They are capable of gnawing huge tree trunks and felling large trees.

That’s really thick fur! This helps them stay afloat in water, but also keep warm in the cold.

They molt in summer to help them keep cool.

7. They communicate with their tails

The iconic beaver tail is more than just a swim aid and rudder. Beavers use them to draw attention to threats, slapping them against the water as a warning. 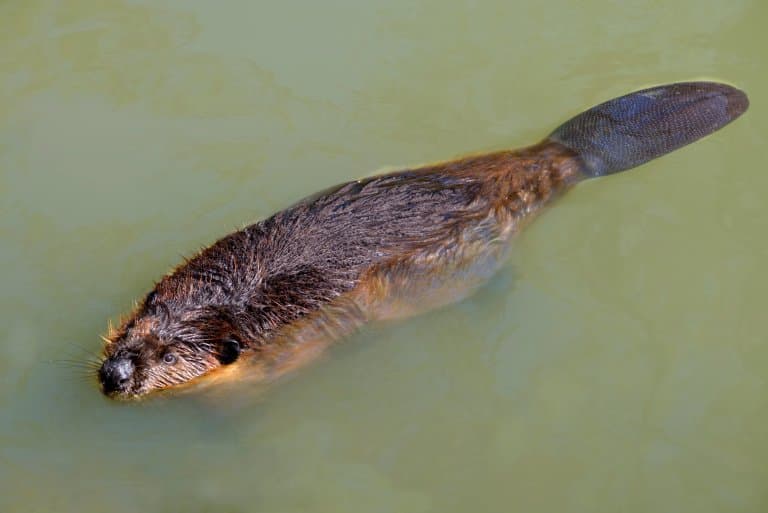 8. They can stay submerged underwater for 6-8 mins

They have large lungs, which allows this semi-aquatic animal to stay underwater for extended lengths of time.

While their movement on land can appear fairly awkward, they can be quite fast and in water can swim up to 8 kph (5 mph)

9. Beaver dams are not just a home

By gnawing down surrounding woody shrubs and trees, beavers create dams, flooding the regions upstream and creating deeper water for them to forage in.

A single family of beavers can maintain over ten of these dams, in which they make use of the protection from predators, the elements and protective areas for them to store food.

Dams can range in height up to 3-4m, and can range anywhere from 1 meter in length to hundreds of meters! 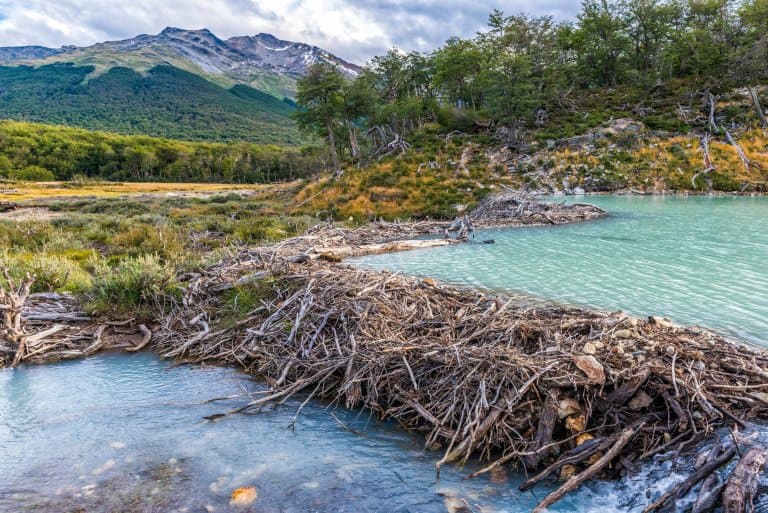 11. They don’t just build dams, they build lodges too

These lodges are dome like structures that provide additional shelter for beavers away from predators. Beavers make two types of lodges – bank lodges and open-water lodges.

Bank lodges are burrows built along the shore, while water lodges are more like an island of sticks and mud in the middle of the water. Both types of lodges can have multiple underwater entrances, with separate living and eating chambers! 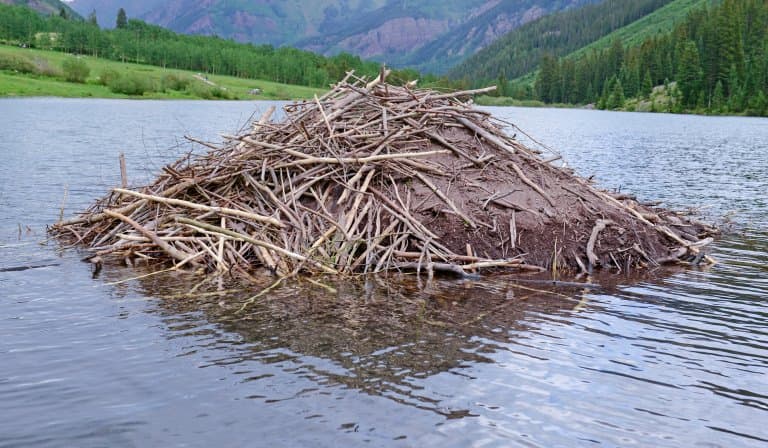 Beavers also build transport canals between dams, allowing them to carry material for their various buildings between sites.

These resemble straight, direct waterways that link different locations together.

Beavers practice what is known as coppicing, which means cutting away some of the woodier sections of plants to allow for new growth of beaver food.

This is something that conservationists currently do to stimulate new diversity in regions with no natural beaver populations and is absolutely necessary for some species to thrive.

Robins, blackbirds, chaffinches and tits are examples of coppice species, that thrive in coppiced woodlands.

14. They provide a series of ecosystem services

Beaver behaviour, as destructive as it may seem, is hugely beneficial to both the environment and many people who live around them.

They can build fertile sediment in the flood plains they create, trap greenhouse gases and other pollutants, and stimulate biodiversity by creating new natural habitats for wildlife.

Because of the tremendous impacts on the biological communities they serve, beavers are known as keystone species by ecologists. 3 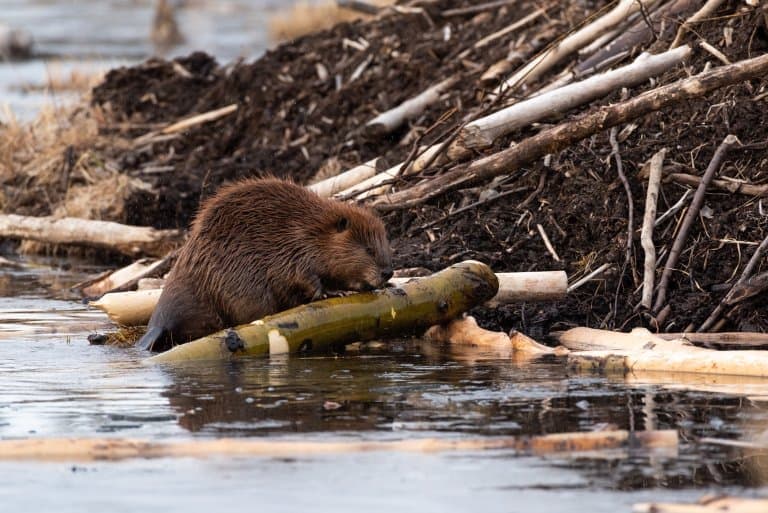 15. Most of the European populations were turned into hats

This happened as early as the 14th century when global populations of beavers were threatened by the hat trade.

So popular was beaver fur that these animals were hunted almost to extinction until new methods of fur processing allowed cheaper firs to provide a more cost-effective solution to the disappearing populations of beaver.

The significance of the return of these incredible animals can’t be overstated in terms of biodiversity and landscape engineering and represents a dramatic leap in the rewilding of local habitats. 4

International Beaver Day aims to celebrate and raise awareness of the plight of the beautiful beaver.

18. The beaver is an official national symbol of Canada

The beaver was awarded this status due to its historical and cultural significance to Canada.

The emblem is “An Act to provide for the recognition of the Beaver (Castor canadensis) as a symbol of the sovereignty of Canada”, which received royal assent on March 24, 1975. Beavers are also the official state mammal of Oregon and New York. 5