Up in the mountains of Southern Europe, India and Tibet, there’s a bird with a wingspan of almost 3 meters (10ft) and a powerful, bushy neck that likes to break bones.

Legend has it they never alight on the ground and European hunters referred to it as “devil bird”, but this mysterious creature, now known as the bearded vulture, has a history of being misunderstood. 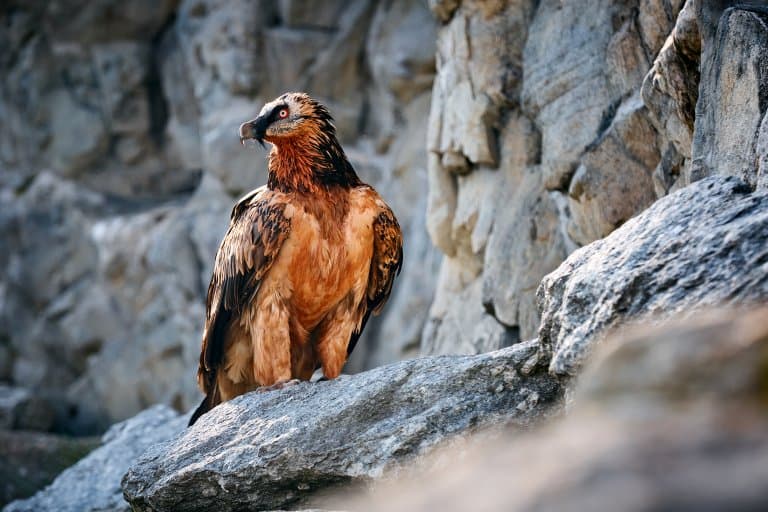 The bearded vulture is an enormous, majestic scavenger with a peculiar diet, mostly feeding on the bones of dead animals.

They are one of the largest birds of prey, larger than a golden eagle in size – and are the Alps largest bird. They are also known as the ‘lammergeier’ or ‘ossifrage’.

They nest high up in the rocky mountains in Southern Europe, Africa, the Caucasus, Southern Asia and Tibet. They are extremely rare, but have been spotted as far as the Peak District in England, in the UK.

Bearded vultures are monogamous, and tend to lay two eggs when they breed. The smaller egg is biological insurance, as the larger chick tends to kill of its younger sibling, which is known as ‘obligate siblicide’ (and tends to occur in birds).

It’s revered in legends all over its habitat, from as far back as 500BC and likely earlier. In many cultures, it was considered a force of positivity, but in some, it was deeply dreaded.

It’s currently listed as near threatened, and there are thought to be less than 10,000 birds across the globe in total. There are numerous programs in place to attempt at restoring its populations to their former glory.

1. They are Europe’s most rare vulture

These huge birds were once common over Southern Europe and the Balkans. Due to the timeless and destructive nature of human panic, they were hunted almost to extinction by smooth-braided superstitionists all over the continent in the 1900s because of the hysterical assertion that this bird would carry off sheep and children.

Fortunately, someone with eyes eventually realised these birds don’t really even eat meat, let alone live animals (or children) and work has since been ongoing to reintroduce the vultures to their previous habitats. 1 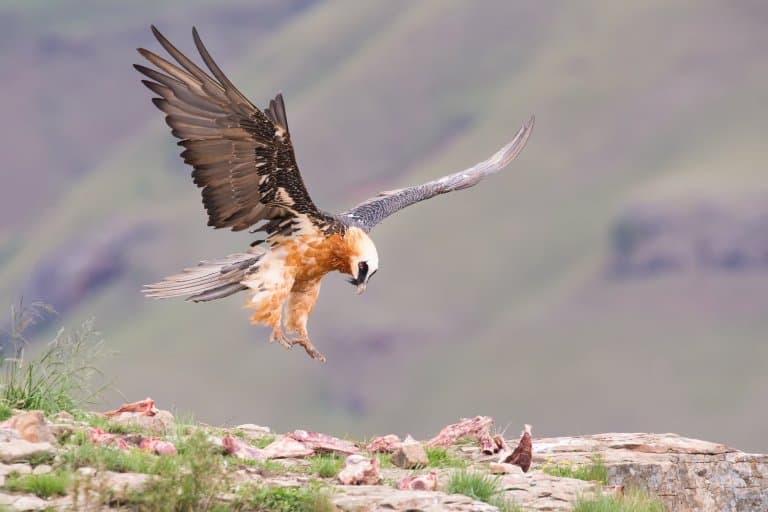 2. They rub iron rich soil into their feathers to give a fiery appearance

Adult bearded vultures have a white coat around their neck and chest, which they purposefully paint a rusty red by bathing in pools thick with iron deposits and rubbing it into themselves.

There’s great debate as to why they take part in this behaviour, which appears to be instinctive rather than learned.

Researchers have suggested it may advertise strength and gives them a dominant bright orange appearance and a ‘status symbol’. While others argue it has nothing to do with appearance, and the iron dioxide might help kill bacteria on their feathers. 2 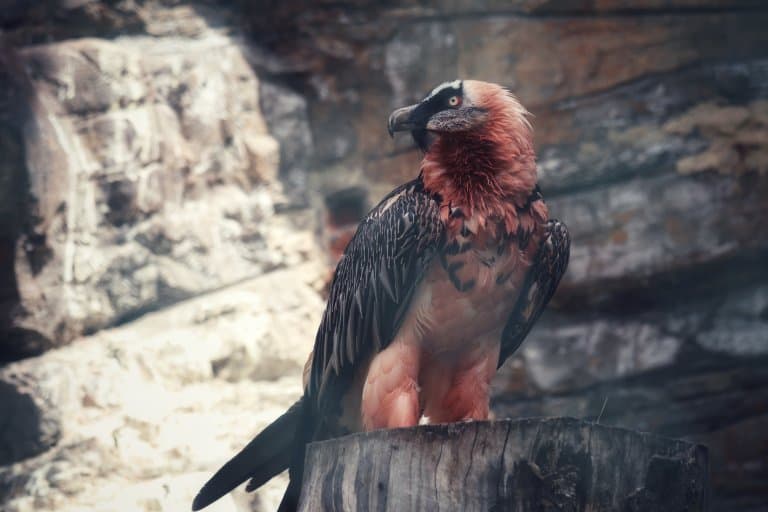 3. They have a feathery neck

This might not seem like a strange thing for a bird, but in the world of vultures, it’s quite unusual.

While most vultures have bald necks due to the messy nature of the places they insert their heads when feeding, bearded vultures aren’t concerned by the threat of a little mess around the gills, perhaps providing a hint at what they eat…

4. They have some serious stomach acid

If most vultures avoid blood and poop stains from their choice of food and have a much less acidic stomach, it’s safe to say that their diet differs from the bearded vulture. And it does.

The latter feeds almost exclusively on bones, which makes it very unique in the world of vertebrates.

They can swallow and bite through brittle bones, before their powerful digestive system dissolves them. 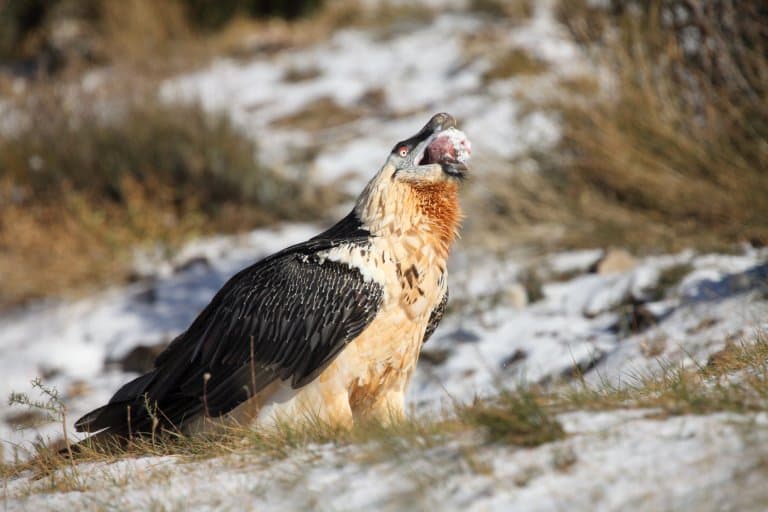 Bearded vultures eat mostly bone, but they have no teeth to break them up.

Instead, if they have a bone that’s too big to swallow, they’ve learned to take it up to over 100 meters in the air and drop it onto the craggy rocks below.

7. Bearded vulture will drop tortoises from the sky

Bearded vultures will attack live prey, and tortoises are a particular favourite. They will pick up a tortoise, fly to a height and drop them onto rock so their shell cracks.

Other animals such as hares and reptiles like lizards have also suffered the same fate.

The taxonomic name for the Bearded vulture is Gypaetus barbatus barbatus, which directly translates to “vulture beard beard”.

9. Bearded vultures have been known to attack large animals

This includes ibex, goats and steenbok (an antelope). Some of these have resulted in deaths, as the bearded vulture has scared them off rocky cliffs.

One of their alternative names ‘the lammergeier’ originates from the German word Lämmergeier, which means “lamb-catcher” – in reference to the belief they attack lambs and sheep on farms.

10. It’s the source of myths and legends all over history

The Iranian name for the bearded vulture is the Huma, a mythical bird which in Turkey symbolises unreachable ‘highness’. In ancient Persia, it bestows kinship on those it flies over; in Ottoman poetry, it is described as staying afloat in the air its entire life. Other traditions grant it powers of good fortune, reincarnation and enlightenment.

In Europe, it was known as the devil bird, something which we’re desperately trying to correct, in hindsight. 4

11. It has an asteroid named after it

The legend of the Huma has inspired an asteroid naming campaign in 2014 to come up with the name 3988 Huma to label a 750m asteroid after this majestic bird, on account of the myth that it never touches the ground and that its appearance in the sky brings fortune.

12. It’s more closely related to hawks than most other vultures

Many vultures you may be familiar with come from the family Cathartidae, which includes iconic American species like the California condor and the king vulture.

Bearded vultures are from a separate lineage and occupy the family Accipitridae, along with the harpy eagle and the goshawks.

They do share this family with the Egyptian vulture, though, so they’re not completely lonely. 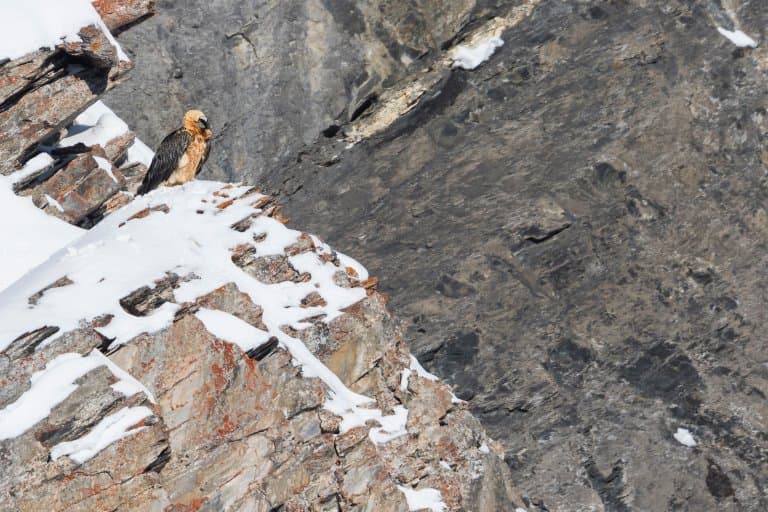 13. Bearded vulture are an umbrella species

When working hard to look after a threatened species, sometimes conservationists inadvertently end up helping other species in the same ecosystem, and the ecosystem as a whole. This means that focussing efforts on certain ‘umbrella’ species is a cost-effective and efficient way of adding net gain to a conservation location.

Reducing poisoning efforts and protecting bearded vulture habitats has led to eagle and ibex populations stabilizing in some areas,

14. Humans are their major threat

The threats that bearded vultures face include poisoning, lead poisoning, collisions with powerlines, and intoxication from NSAIDs, or non-steroidal anti-inflammatory drugs (like ibuprofen). So where are these vultures getting their hands on our pharmaceuticals?

The use of diclofenac in livestock is very common. This is an NSAID similar to ibuprofen that farmers use on domestic animals before slaughter. Unfortunately, the accumulation in the bones of these animals is high enough to cause high levels of toxicity in the vultures who consume them, leading to immune system issues, behaviour changes and even death.

It’s thought that this drug has been responsible for the disappearance of up to 95% of three species of Old World vulture in the last two decades. Conservationists are strongly emphasising the need to improve monitoring of these effects. 5 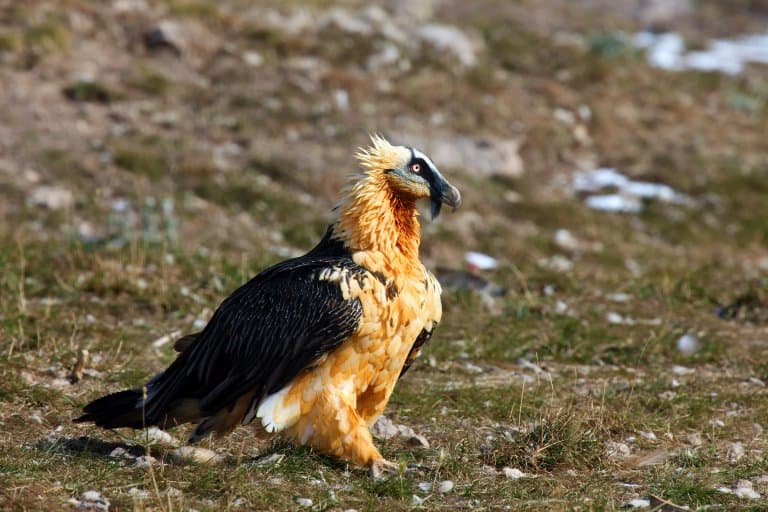