The golden eagle is quite possibly the most lethal predator in the bird world.

Tremendously strong, blazingly fast and highly adaptable, it has spread to every mountainous corner of the Northern Hemisphere, striking fear into the hearts of creatures of every shape and size wherever it goes. 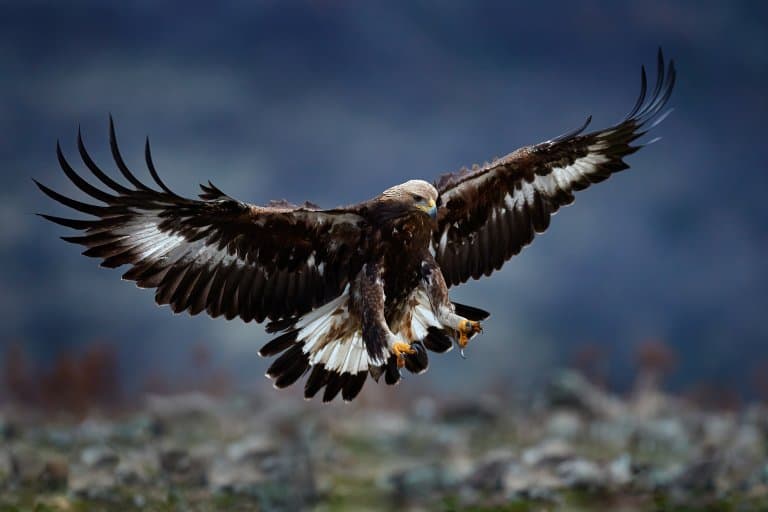 Golden eagles share the genus Aquila with 10 other species, collectively known as the “true” eagles. Interestingly, “eagle” is not a distinct taxonomic group, but rather describes any member of the family

Accipitridae that is large enough to take vertebrate prey above a certain size. Of the 255 species within Accipitridae, 68 are considered eagles – the other groups include hawks, kites, honey buzzards and old-world vultures.

Golden eagles inhabit mountainous regions and open spaces, where they can build large nests high on cliffs to breed and lay eggs. They are often solitary, but will pair and mate for life.

They are agile and powerful predators and will hunt a huge variety of prey, and use their sharp talons to kill and carry small mammals, such as rabbits, hares, squirrels, marmots – and even other birds, reptiles, and much larger animals.

While the golden eagle is not considered as threatened by the IUCN, their populations have experienced sharp decline in many parts of its range due to human extirpated. These birds were seen as a threat to farming livelihood and hunted and poisoned.

Fortunately, these incredible birds are highly adaptable and are considered to have one of the largest populations of any eagle alive today.

1. The golden eagle is the most widespread species of eagle in the world

Golden eagles can be found in virtually every mountainous habitat in the Northern Hemisphere.

This is largely due to their remarkable adaptability, which allows them to find and catch prey in a wide variety of different habitats. 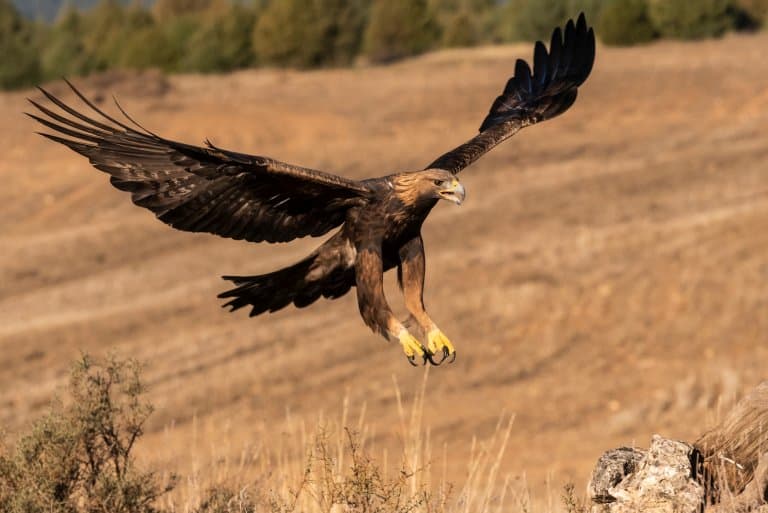 When it comes to raw speed, the golden eagle is ranked second in the world – only the peregrine falcon is faster, and not by much.

In a straight, vertical stoop, golden eagles are capable of achieving speeds in excess of 200 miles per hour; a hunting tactic which they use to catch large high-flying birds like storks and geese.

In horizontal flight they are also one of the fastest birds, capable of reaching speeds of 130 kph (80 mph). Only a few birds have been recorded flying at fastest speeds.

3. They are the 5th largest eagle in the world

Golden eagles are extremely large raptors and their wingspan can measure over 2.3m (7ft 8).

Females are larger than males, and the largest subspecies is the Asian golden eagle, also known as the Himalayan golden eagle or berkut.

4. Very few species are off the menu of a golden eagle

Golden eagles are highly capable generalist predators, known to prey upon over 400 individual species including mammals, birds, fish and insects.

When food is scarce they will tackle large, dangerous prey, and have even been observed capturing bear cubs, and seal pups. 1 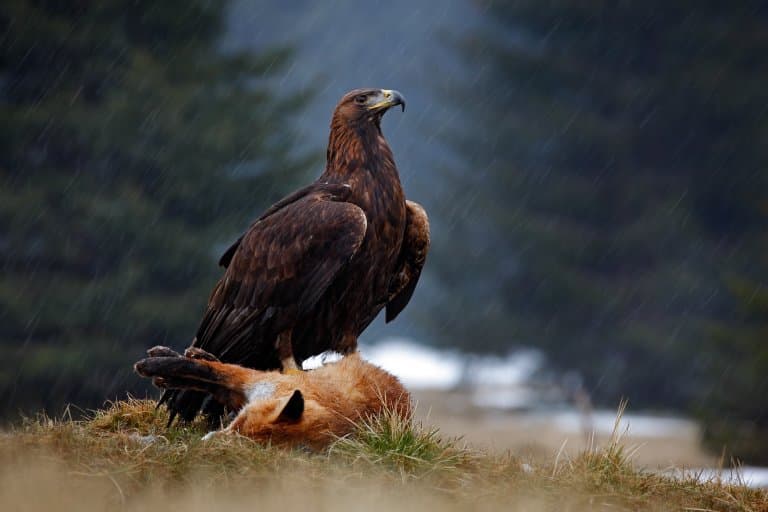 5. When food is scarce, golden eagles turn to a terrifying strategy to kill large prey

In mountainous habitats, golden eagles have learned to stray from their normal hunting tactics and use gravity to their advantage. When smaller prey cannot be found, golden eagles have been recorded dragging adult mountain goats off of cliffs, sending them plummeting to their doom. 2

6. Golden eagles from around the world look different

There are currently six extant subspecies of golden eagle around the world.

Eagles from Europe, North America, North Africa, Siberia, the Himalayas and Japan all vary in size and appearance.

Compared to the European golden eagle, which is the nominate subspecies, Himalayan eagles tend to be the largest, while Japanese golden eagles are much darker in their colouration.

7. They can rotate their head 270 degrees

Golden eagles have huge eyes and excellent vision, and while their eyes don’t move much in their sockets, they are able to rotate their heads similar to an owl.

Their day time vision is much better than humans, but actually their vision at night is similar to humans and why they hunt during the day. 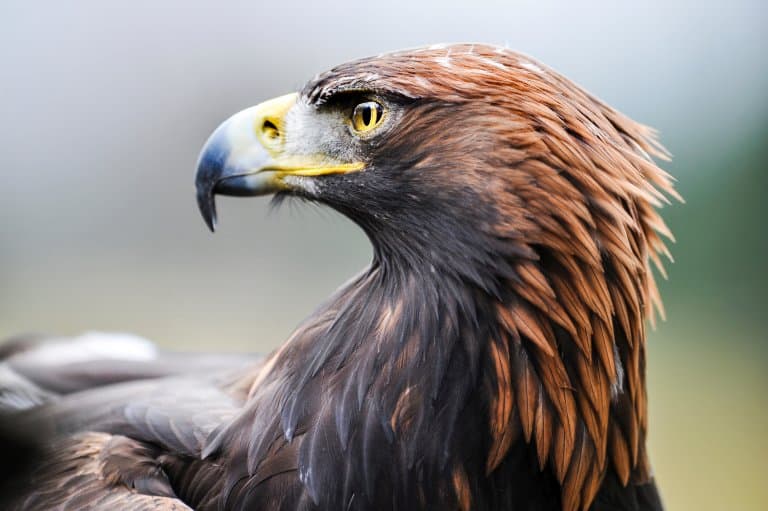 8. Golden eagles could be described as the strong, silent type

Among eagles, golden eagles are particularly quiet, and their voices are usually only heard while they are raising chicks.

However, when they do communicate vocally with their peers they are known to produce at least nine distinct calls, each with a different meaning.  3

9. Golden eagles are lazy by nature

Like apex predators around the world, golden eagles face a simple but constant threat to their survival- they never know when they are going to get their next meal.

Because of this, it is vitally important for them to save as much energy as possible between hunts- it is thought that they often spend at least 85% of their waking hours sitting on perches. 4

Raising chicks is a tough job which requires devoted and hardworking parents, and the best way to ensure success is to find a capable, proven partner and keep them around.

Golden eagles pair for life, sharing the same home range and reusing nests within their territory year after year.

Golden eagle pairs usually have up to three main nests sites within their territory, selecting one to improve and re-use each year.

After a pair leaves their territory or is driven out, successive eagle pairs will continue to use the existing nests- records exist of nests being continually re-used for at least 45 years! 5 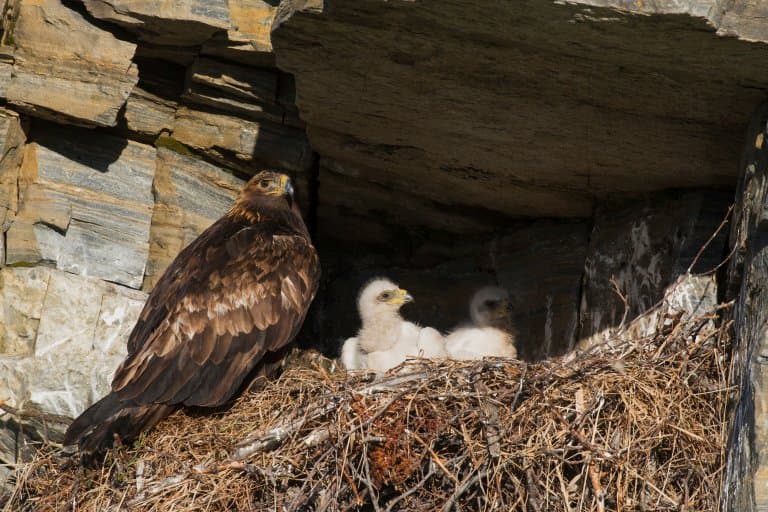 12. Their chicks are known as ‘eaglets’

Golden eagle chicks will hatch in the order laid. Often the older chicks will attack, and sometimes even kill their younger siblings. This is known as siblicide and is common in birds.

Chicks are fed in the nest until they are able to take their first flight, usually within 90 days.

13. Humans have been fascinated by golden eagles since time immemorial

Golden eagles have been held in reverence by human cultures around the world for thousands of years.

They are considered one of the most prestigious birds used in falconry, and historically using trained golden eagles for hunting was often reserved exclusively for nobles and kings. 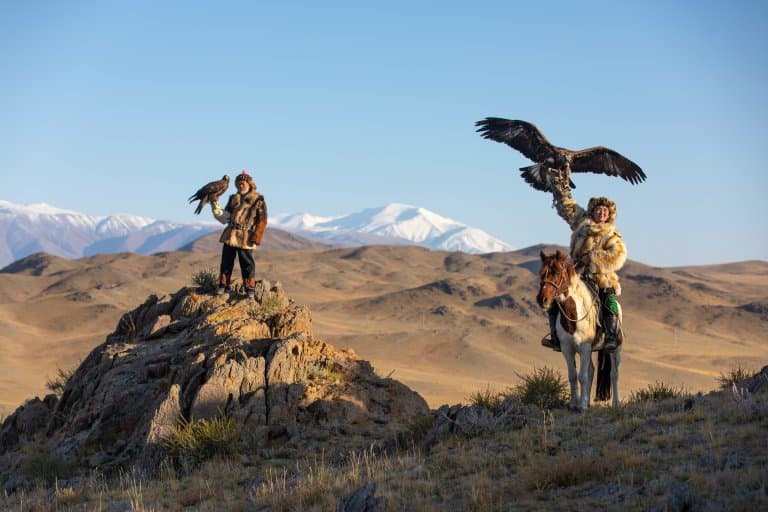 14. Despite their fearsome appearance, golden eagles are wary around humans

The industrial revolution led to the widespread vilification of golden eagles, and they were extirpated from much of their natural habitat, particularly in Europe.

Unlike many other eagles with whom they coexist, golden eagles are particularly sensitive to human disturbance and go out of their way to avoid heavily populated areas, so their current range remains forever altered by human persecution.