The bat-eared fox is a cute little fox species that lives on the plains of Eastern and Southern Africa eating termites and fooling around.

It’s an inquisitive little mammal with ears that can be up to 5” (13cm) long, popping out over the short grass. But the role of these enormous dish-like ears might not be as obvious as you think.

Bat-Eared foxes, Otocyon megalotis, are unsurprisingly named after their ears.

In fact, their ears are so outstanding, that they’re named after them twice: the scientific name translates to “ear-dog, big-ears”. They use their ears to listen out for subterranean termites and insects to diet on, but will also eat wild fruit.

They are largely nocturnal, however around South Africa, they are nocturnal only in the summer and diurnal during the winter.

These are small scrubland foxes that are tough as nails and really playful. They’re well adapted to live in the African scrubland and have some fascinating habits and quirks.

Like most canids, bat-eared foxes have a mating strategy that involves a monogamous pair. They do occasionally relax into breeding in small groups of free-lovers but in general, they tend to stay in exclusive pairs.

This isn’t very unusual in the animal kingdom (although it is far from the norm), but what’s interesting is that it seems to be a practical limitation, based on foraging areas and the male’s ability to guard his mate, rather than an inherent social effect.

Around 10% of cubs are born from secret affairs between the female and her ship in the night. So it seems that their monogamy is a default setting because it’s just too costly to go shopping around. 1 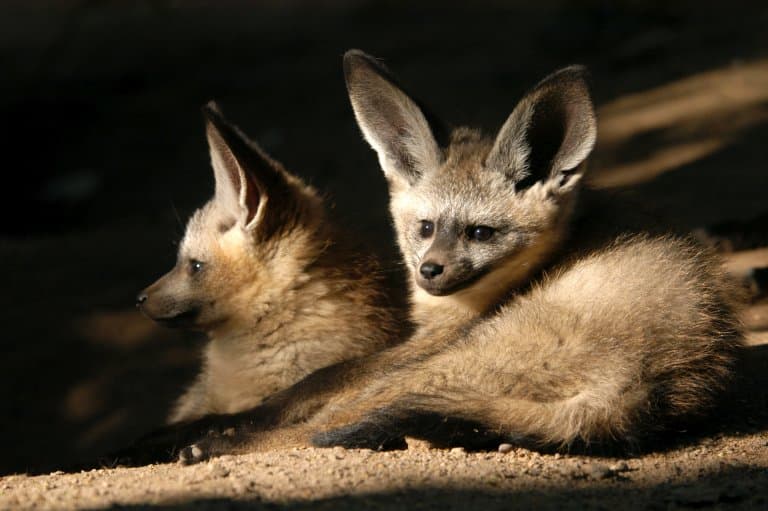 2. Still, they seem to get along

Another curiosity is that while mate-guarding is a valid theory for their monogamy, pairs of bat-eared foxes don’t seem to squabble over feeding grounds or mates. They’re not very territorial and are quite okay with other pairs sharing their space. They’re often found foraging in overlapping groups.

When in a pair or a group, bat-eared foxes groom each other with their front teeth.

This is the most common social behaviour in terms of frequency and duration and is a form of grooming, which helps maintains bonds between the individuals. 2 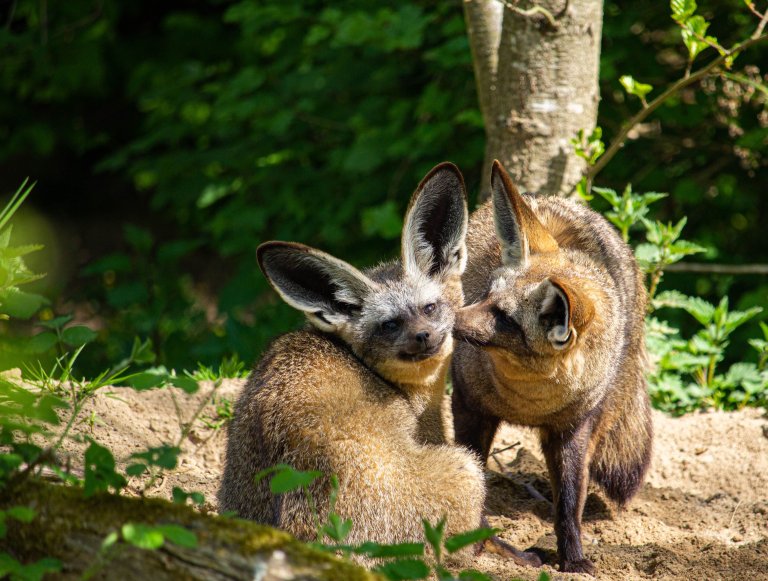 It seems like the life of a vat-eared fox is a relatively joyous one. Adult bat-eared foxes seem to be more playful than their other canid neighbours.

They’ve been seen standing up on their hind legs ‘boxing’ with each other after being separated on foraging trips; throwing themselves down on their back and pawing; playing fighting; charging at one another and jumping around happily.

5. Mothers jump to warn their cubs of danger

When a jackal or hyena (or even a falcon in some cases) passes by a den, a mother with cubs will jump up and let out a soft woof as a warning.

The pups then rush back into the den and wait for the danger to pass.

When faced with a potential predator, bat-eared foxes curve their backs up, curl their tails and let out a growl or a high-pitched bark as a warning.

If it gets too close, they can spring into the air, stiff-limbed, landing on their hindlegs first, much like a gazelle. This leaping is called pronking, or stotting, and is very uncommon in canids. 3

7. They hunt with their ears

This might seem like an obvious one when you look at the animal, but those enormous ears are pretty good at picking up the sounds of insects in the dark.

The thing about researching, though, is that the obvious thing isn’t always the correct thing, and when people think something is obvious, they’re not as inclined to put it to the test. This means there are a lot of ‘obvious’ things that are shown to be false; and so it seems, that being able to hear in the dark isn’t the only reason these animals have enormous ears.

So, what other reason could they have for these enormous ears? 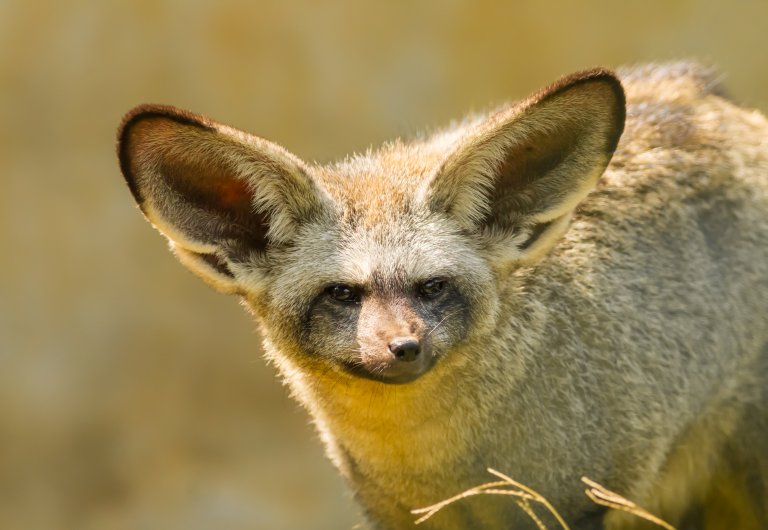 8. They control their body temperature with their ears too

Most hairy mammals have some part of their body that is bald and exposed to the elements. If you’ve ever seen a dog panting, that’s how they use their tongue to conduct their body heat away from themselves to cool down. Primates have bald faces and palms into which they pump blood (ever get red-faced when exercising?) when it’s hot and restrict flow from when it’s cold.

Bat-eared foxes have these huge radar dish ears that, while great for picking up the sound of tasty critters in the night, can also act as thermoregulation panels. This isn’t unique to these foxes, either. Many large-eared animals regulate their body this way too!

9. They’re the only true insectivore among all the canids

Almost all canids species will eat an insect or two, but most are happier scavenging for meat, roughage or discarded pizza slices. The bat-eared fox knows what it likes and isn’t interested in any of that.

The vast majority of its diet is termites, and when they’re not available they’ll go for ants and beetles, grubs and crickets. It’s almost exclusively insectivorous, and that’s unique among canids.

It’s so specialised to this diet that its teeth have evolved to be very numerous (they have more teeth than most mammals!) and small, and haven’t got much ability to cut through meat, but these foxes will occasionally take a small bird or mammal if the opportunity presents itself, but 80-90% of its diet is termite-based. 4

10. They hang around big poopers

The feeding strategy of bat-eared foxes is simple: follow the big mammals, wait for them to poop and the insects will come to them.

These foxes live among buffalo, gazelles and wildebeest to make the most of the attractive nature of poop to insects.

Bat-eared foxes have been seen outmanoeuvring cheetahs in hunting attacks, leading many to claim that these plucky little foxes can run at 70mph+. This is most undoubtedly false, but their speed and agility do allow them to put up a good fight against the fastest land animal ever recorded.

One adaptation to this predatory pursuit is their ability to change direction impressively quickly. When fleeing predators, they run in a zig-zag and can reverse direction at the drop of a hat.

12. They have been hunted for their fur

By Botswana natives. However, there are no major threats to bat-eared fox populations and they are largely considered a useful control of termites which are seen as pests!