Equipped with specialist summer and winter wardrobes, an amazing nose, an indiscriminate palate and a healthy dose of vulpine cunning, the Arctic fox is the perfect polar pioneer.

These small, hardy opportunists are beautifully adapted to harsh yearly cycles of severe cold, starvation and abundance, and have conquered the majority of land within the Arctic circle. 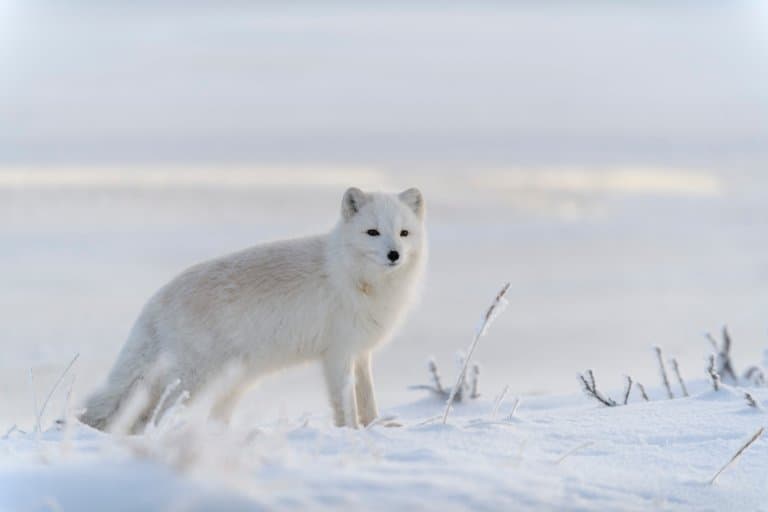 They are sometimes referred to as the polar fox, the white fox or snow fox.

The Arctic fox is the northernmost member of the genus Vulpes, which contains 11 other extant species scattered across the globe.

A highly adaptable species, Arctic foxes can be found throughout the Arctic tundra, in boreal forests and isolated islands within the Arctic circle, and have even been observed on sea ice close to the North Pole.

Around 90% of Arctic foxes are white in the winter and brown in the summer, and are usually found in snowy tundra habitats where their camouflage conceals them from predators and prey throughout the year. The remaining 10% are a dark grey colour and are known as blue morphs.

They have large fluffy tails and these rare specimens tend to occupy coastal habitats where they blend in with exposed rock. They live in family groups, of male, female and their kits.

The arctic fox is omnivorous and opportunistic dye to living in some of the harshest places on the planet where they will diet on small rodents, in particular lemmings, as well as voles, fish and birds. They will eat almost anything they come across though, and supplement meat with carrion, berries and insects.

1. Arctic foxes change with the seasons

Although the white morph is the only one to dramatically change colour over the year, all Arctic foxes shed and regrow their coats to adapt to seasonal temperatures.

Their coats are around 200% denser in winter than in summer. 1

While the white and blue forms of the Arctic fox are well known, a third variant called the ‘sandy’ morph also exists.

It is extremely rare, thought to represent less than 1% of the global population. 2

3. Most don’t live past a few years in the wild

While studies of this elusive animal are not extensive, researchers have found evidence to suggest many wild arctic foxes don’t live past a few years in the wild – with many not making past the first year, due to the harsh living conditions and number of predators.

4. They have huge litters known as ‘kits’

Arctic foxes produce the largest litter of any mammal in the order Carnivora- up to 25 kits in one go!

This is thought to be an adaptation to the low survivability rates of kits in their highly demanding Arctic habitat. Arctic foxes can have two litters a season and they are monogamous, meaning they mate for life. 3

5. They have dark skin under their coats

Similar to polar bears, arctic foxes have dark skin under their white coats, which is better at retaining heat in their freezing cold habitat.

Arctic foxes don’t hibernate through the winter, but they do have the ability to alter their metabolism through the seasons.

Their basal metabolic rate can change by as much as 36%, slowing down in the winter to conserve energy and then speeding up in summer when it’s time for breeding and rebuilding their fat reserves. 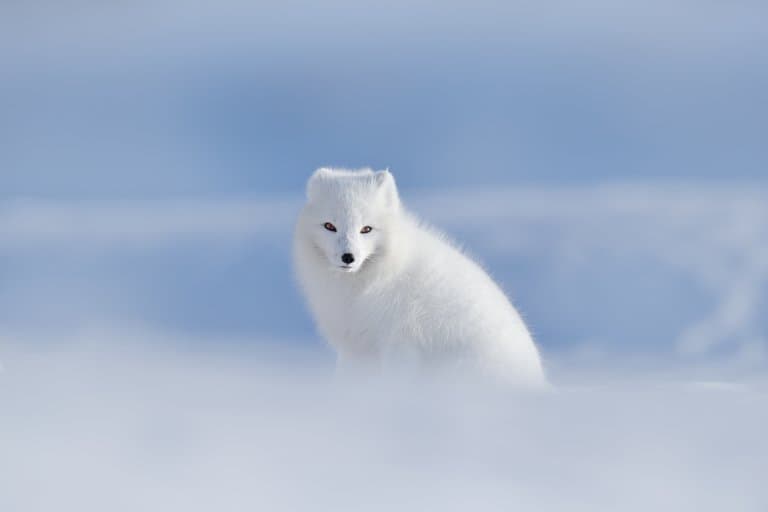 7. They bury hundreds of food caches in summer and rely on them all year

The summer is a time of plenty for the Arctic fox, and they take full advantage by collecting and burying as much food as they possibly can.

The frigid soil acts like a giant freezer and preserves it for a long time- foxes have been observed storing goose eggs in summer and feeding on them right through the winter, well into the following spring. 4

8. Arctic foxes have the best insulation in the business

Sporting the most insulating fur of any mammal and the only furry foot pads in the family Canidae, Arctic foxes are well equipped to face the bitter cold of the Arctic winter.

In addition to that, they are capable of gaining up to 50% of their weight in extra fat during the summer!

9. They have an astounding sense of smell

Arctic foxes have incredibly keen noses; they are capable of smelling a polar bear kill from as far as 40 kilometres away, and can sniff out a frozen lemming beneath 70 centimetres of snow.

They are also thought to actively track down polar bears in the hopes of scavenging on their kills. 5 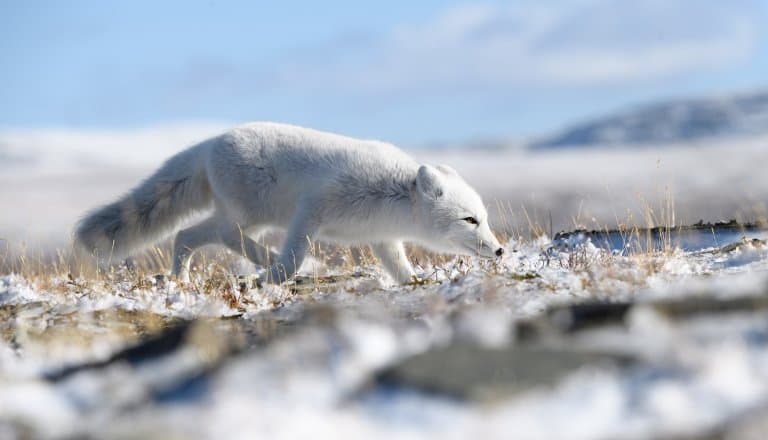 10. They snow dive for lemmings!

When they have sniffed out a lemming burrowing under the snow, they will jump in the air and nose dive into the snow to catch their prey.

In some areas, they depend so much on lemmings as their main food source, their population numbers will fluctuate in response to lemmings own populations.

11. Most Arctic foxes are territorial, but not all

Less than 5% of arctic foxes are fully nomadic, and these tend to be found in areas where food is consistently scarce year-round where they can travel thousands of kilometers in search. 6

12. Their closest relative is a hot weather specialist

Although the geographic range of Arctic fox overlaps with that of the red fox (Vulpes vulpes), they are actually more closely related to the kit fox (Vulpes macrotis).

This seemingly unlikely cousin of the Arctic fox is found in hot, arid habitats in the southern United States and Mexico.

13. Arctic foxes and red foxes don’t get along

In areas where Arctic and red foxes share the same space, red foxes are dominant; they will kill Arctic fox adults and kits whenever they find them.

Red foxes are slowly moving further and further north into Arctic fox territory, and it is thought that climate change and reduced populations of wolves- which hunt and kill red foxes- are to blame.

14. Not all Arctic fox populations are safe

Despite their species being listed globally as Least Concern, Scandinavian Arctic foxes are critically endangered, with less than 150 adults in Norway, Sweden, Finland and the Kola peninsula combined.

It is thought that a surge in fur prices during the early 20th century reduced their population so much that they are struggling to recover despite rigorous protection. 7

New Zealand has extremely delicate ecology, with many rare, endemic species at extreme risk from invasive predators. Because of this, the import of Arctic foxes (alongside beavers, gerbils, sticklebacks and squirrels, to name a few) is strictly prohibited. 8