Of all the duiker species, the zebra duiker may be the oldest.

This particular species has a striking resemblance to another striped mammal in Africa, whose name should come as no surprise, and although it’s locally known as the “marking deer”, it is no such thing.

The zebra duiker is a small antelope, that lives in a few midwestern regions of Africa. This is a small, elusive antelope that hides deep in the jungles of Liberia, as well as some populations in Ivory Coast and Sierra Leone, and prefers the ever-reducing primary forest habitats.

They are sometimes referred to as the banded duiker or striped-back duiker. They have a golden, brown-red coat with between 12-16 stripes like a zebra and short, but sharp horns that can grow up to around 5cm in length.

They primarily diet on fruit, seeds and foilage but will supplement it with meat, such as rodents.

Unfortunately they are classified as vulnerable by the ICUN due to loss of habitat from deforestation, and overhunting where they are hunted for bush meat.

1. They’re in the cow family

While duikers look like tiny little deer, they’re actually in the family Bovidae, and as such, are more closely related to cows and buffalo. In fact, none of the gazelles or springbok or any of the recognisable deer-like antelope are really deer, they’re all bovids.

Incidentally, if you’re looking for an African deer, the Atlas Stag has you covered. Aside from having the coolest name of any deer, it’s also got the title of being the only native true (Cervus) deer to the continent. 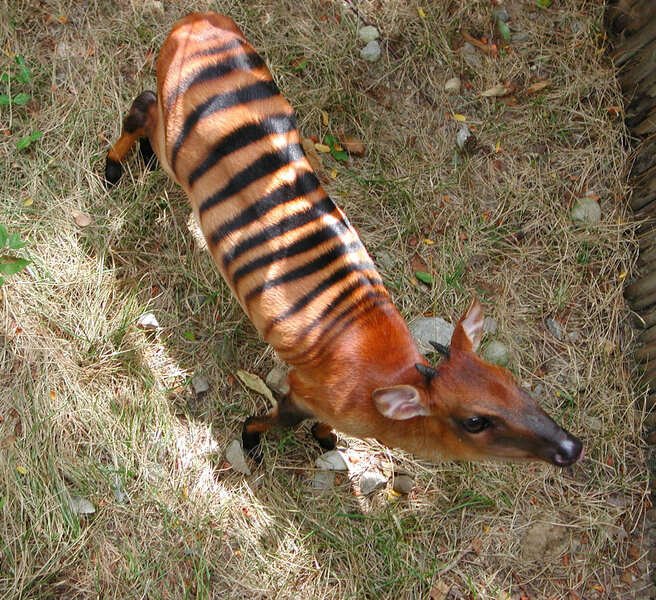 2. They change their sleeping habits in captivity

Zebra duikers are nocturnal in their natural habitat. However, when in captivity, they seem to prefer being awake in the daytime.

This suggests that being nocturnal is a behavioural choice; perhaps in response to the threat of predation.

3. Their stripes may protect them from pests

Much like their namesake, zebra duikers have rows of very striking black vertical bands along their bodies. While not as vivid as the black-on-white contrast that zebras are sporting, these stripes may work to dazzle pests, such as horseflies and tsetse flies that live in the area.

There are other ways stripes can be helpful as camouflage; they work to break up patterns. Especially useful in prey animals who hang around together, stipes can make it hard for an ambush predator to see where one individual ends and another begins.

Further, in habitats with lots of dappled shadows and tall grass, stipes do help an animal blend in. 1

4. The stripes also act as identifiers

Much like a fingerprint, a zebra duiker’s stripes are unique to each individual, which means that they can be picked out of a lineup by a mate or competitor.

Duikers aren’t very sociable though, choosing to hang around alone, or in mating pairs, rather than large groups.

5. They have complex brains!

Being so small, it might be easy to think that Zebra duikers are a little dumb. Like the yappy little dog compared with the noble German shepherd, smaller versions of animals can often come with smaller brains, relative to their body size. This isn’t the case in duikers, though.

Compared with other antelope, they have the largest brains, proportional to their body size, suggesting they have a greater capacity for learning and surviving in dynamic environments.

6. Females are bigger than males

This is unusual in mammals! In many species of duiker, including the zebra duiker, the females are larger and heavier than the males.

This might be because female duikers have longer gestation periods, which may also explain the more complex brains!

7. The marks on their face are scent glands

Right under the eyes of the zebra duiker, there are dark markings; glands called periorbital glands that the animal uses to mark its scent on surfaces.

They do this very frequently, sometimes almost every ten minutes. 2

Being small and tasty, duikers rely on their agility and explosive speed to escape predation. They’re so well adapted to leaping into the bushes, that they are named after it.

The word duiker comes from the Afrikaans for “driver” after their ability to drive hard into the shadows at the first sign of trouble.

9. They get along with lemurs

This might be an unusual camaraderie, considering the only place you can find lemurs in the wild is Madagascar, an Island off the opposite coast of Africa.

But, in trying to find friends for a recently widowed zebra duiker, the L.A. zoo combined a pair of ruffed lemurs in his exhibit, who set to work sniffing, petting and jumping on the duiker, and who were in turn accepted in peace. 3

10. They will eat almost anything

This is very unusual for an antelope, even a bovid. But Zebra duikers will eat the usual antelope diet and supplement it with meat, where it’s available.

This can come from frogs or lizards, or leftover carrion from another kill.

Meat is a great source of easy protein and energy, and sometimes traditional herbivores will diverge from their eating regimen towards a quick top-up of nutrients.

11. They’re particularly sensitive to human impacts on their ecosystem

Zebra duiker habitat is primary forest: a forest that is undisturbed and is not recovering or otherwise immature. This makes it particularly prone to human behaviour, and with deforestation and habitat fragmentation, the zebra duiker’s populations are in decline. It’s also a victim of heavy poaching and hunting for food.

They’re one of the first duiker species to decline from deforestation, and it’s thought there were no more than 28,000 individuals in 2011, and the number has been in decline since.

12. They need outside help

These animals have a lot of potential to recover their populations. They’re smart, small, and have a varied diet. The only thing stopping them is the devastation of their primary forest habitat, and their long gestation periods and small litter make them slow to grow in number.

43% of Liberia is still covered in forest, and it’s up to governments and NGOs to work with local populations and provide an alternative to the logging and poaching that communities rely on. 4