Wombats are a species of marsupial endemic to Australia and the surrounding islands. This means that it is only found natively in this location.

In Australia and Tasmania, you can find wombats in the forests, mountains, and heathlands. 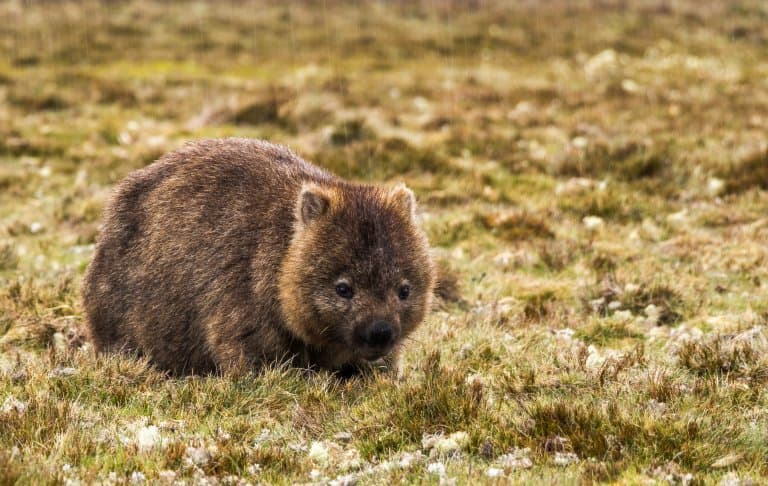 Wombats like to dig extensive burrows of up to 30 meters, which they inhabit and help them escape the heat and avoid predators.

There are three extant, or not extinct, species of wombat in the world. The most notable is the common wombat, and all three species are extremely similar. The common wombat is solitary however, and other species like to live in colonies in their burrows.

They grow to around 1m (40 inches) in size and have short legs and stubby tails. They have often been called ‘badgers’ by early settlers in Australia due to their size and habits.

Wombats are nocturnal and completely herbivorous, meaning that they will emerge at night and only eat plants, grasses, roots and plant material like bark.

There is no name to help tell the difference between a male and a female wombat. However, like other types of marsupials, a baby wombat is known as a joey. There is also a name for groups of wombats. When wombats come together, they are known as a wisdom, a mob, or even a colony.

One of the most interesting facts about wombats is that they’re one of the few types of marsupials. Marsupials are a sub-category of mammals that carry their young in a pouch. Other marsupials include kangaroos, wallabies, koalas and the Tasmanian devil.

With most mammals, they give birth to babies that are fully-developed at full term. This is typically a time period of a few weeks or a few months.

However, the wombat gives birth in just thirty days to an underdeveloped joey. This joey then lives in its mother’s pouch as it continues to develop. 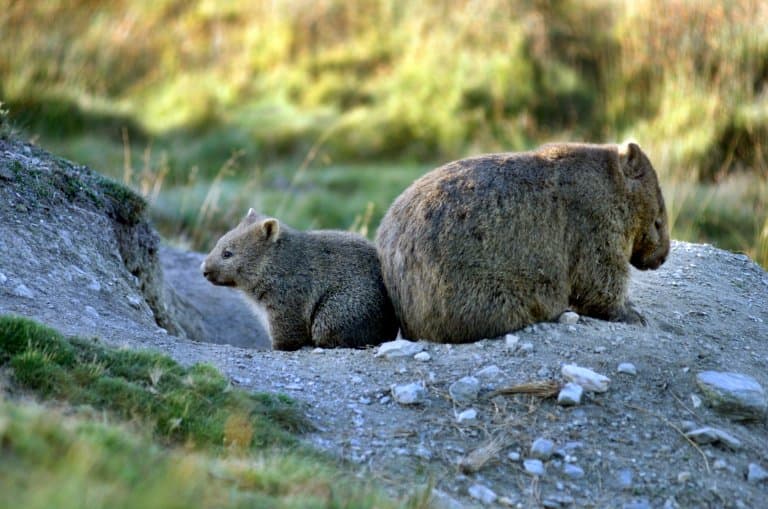 2. The name “wombat” comes from the Dharug language

The word “wombat” is actually a word from the native Dharug language. Previously, the Dharug language was considered extinct. However, there are a few speakers left in the world. 1

Like many other languages, the Dharug language has different dialects. As a result, there are many different spelling variations of the wombat’s name. This includes:

Let’s take a look at another marsupial: the kangroo. Kangaroos are probably one of the most notable pouch-having animals. As a result, when you see their pouch, which faces their head or “forward”, you may think that’s how all maruspials’ pouches look.

And, most do have forward facing pouches – but not the wombat. The wombat’s pouch, instead of facing towards their head, faces towards their rear!

This is actually a beneficial feature. Wombats like to dig and burrow. As a result, if they had a forward facing pouch, it would quickly fill with dirt while they were digging.

A backward facing pouch helps keep the wombat’s joey safe while they dig.

4. The oldest living wombat is over 30 years old!

The oldest living wombat in the world is an individual named Wain, who lives in the Satsukiyama Zoo in Japan. Wain is currently 32 years old, making him the oldest known individual alive. For comparison, that’s over 100 years for a human!

Wain was actually a rescue brought into the zoo in 1989. He was raised after being rescued from his mother’s pouch after a traffic accident. 2

Wombats actually have a unique stomach. While we don’t know much about it still, many scientists theorize that it stretches in certain ways.

As a result, instead of the pellets you usually see with herbivorous mammals, like rabbits, wombat’s have square-shaped feces! 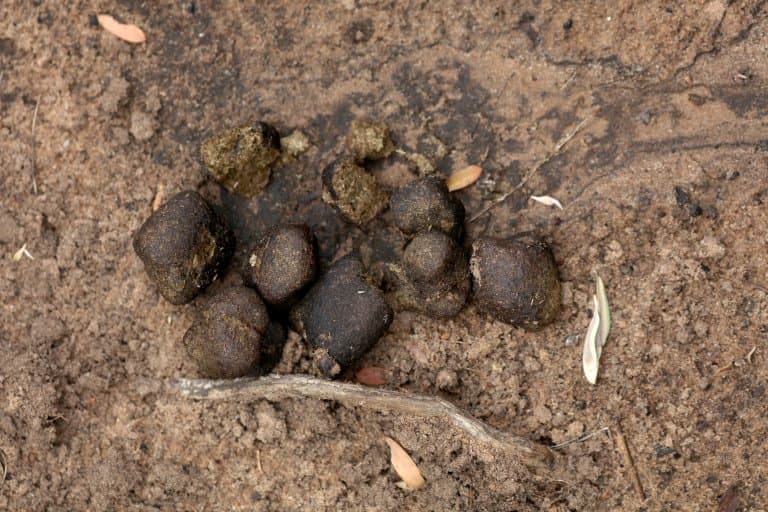 Australia is known for being filled with many strange species. One of the strangest facts about the animals living here, however, is that most marsupials here will actually display bio-fluorescence under an ultraviolet light. This means that they glow slightly!

As an Australia marsupial, the wombat is no exception to this bizarre and unbelievable fact.
3

7. They have one of the slowest metabolisms of non-reptilian mammals

When you look at a mammal like a human or cat or even dog, they need to eat often. In fact, you’re probably eating three meals a day, while your pet is eating at least two.

However, wombats don’t need to eat every day.

This is because they have an extremely slow metabolism that allows them to get the most out of a single meal.

8. The extinct Tasmanian tiger used to prey on them

The Tasmanian tiger is one of the most interesting extinct animals that we have records of.

And, many scientist theorize that they used to be one of the top predators of the wombat, along with other predators still alive today.

9. Wombats are protected under Australian law

Typically, legal protections are reserved for endangered animals. However, despite being of least concern, common wombats are protected under Australian law.

This is because despite it’s name and conservation status, common wombats are not that common anymore. The Northern hairy-nosed wombat is critically endangered and it’s estimated their total population was around 300 in 2021.

With the Northern hairy-nosed wombat threatened by wild dogs, the Queensland Government built a 20km predator-proof fence around their habitat at Epping Forest National Park in 2002 to help the species continue to survive. This helped their population triple in that period.

Wombats in general also have cultural significance in Australia, being featured on postage stamps and coins – which has helped support its plight. 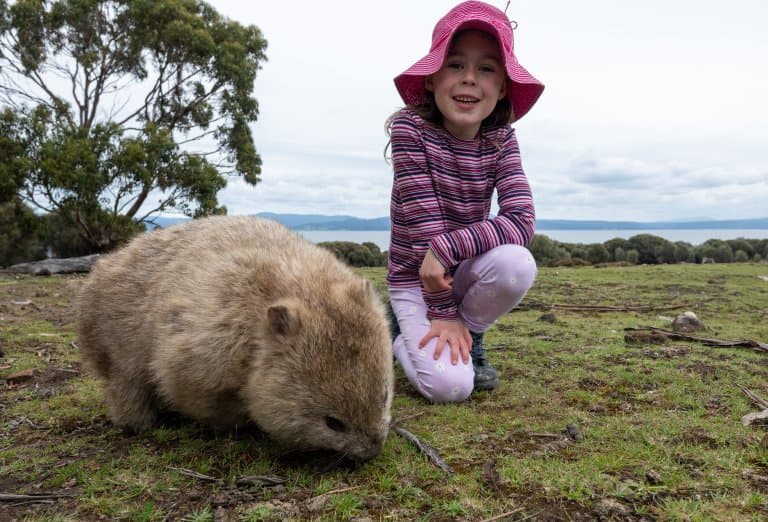 Wombats are known for being very cute. However, they’re also dangerous to humans at times.

Although they’re not the type to go out of their way to attack a human, they will protect themselves when threatened. They have sharp claws and large rodent-like teeth which can inflict damage.

Wombats have even been responsible for at least one human death! 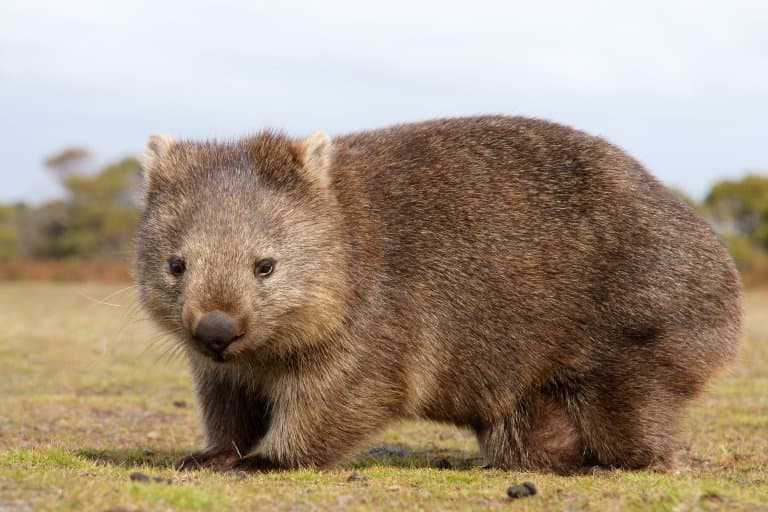