Wildebeests are a member of the antelope family which inhabit the grassy plains of central, south, and eastern Africa.

They are also called gnu (pronounced ‘new’) and are related to goats, sheep, and cattle.

Wildebeests live in savannas and plains, but they can also be found in bushlands and woodlands. The largest groups can be found in Tanzania and Kenya, but are also present in Botswana, Zambia, Zimbabwe, Mozambique, South Africa, Eswatini and Angola.

They are sociable, territorial animals that form herds. Male bulls will challenge one another and lock horns over access to females.

There are two species of wildebeest, the black wildebeest (white-tailed gnu), and the blue wildebeest (brindled gnu). The blue wildbeest is the larger of the species, while the main differences in appearance are their colour and the orientation of their horns.

Wildebeests are herbivorous and are recognized by their large heads, hairy beards, shaggy exterior, and intimidating sharp horns. Many of them have a striped appearance. They will mainly eat grass, but when it’s not available they will eat leaves and other vegetation.

They are infamous for being migratory, and being part of the ‘great migration‘ at the end of the rainy season, to perform an enourmous loop alongside zebra and gazelles in search of greener pastures to graze.

According to the IUCN, neither of the two species is endangered and, overall, populations are holding steady and therefore they are classified as least concern. An incredible estimated 500,000 calves are born each year.

Each year, wildebeests complete a great migration towards the north based on weather patterns.

About 1.5 million wildebeests make the journey, and it is considered one of the most remarkable spectacles on the planet. They can travel hundreds of miles in search of food and water. 1

2. Both males and females have horns

The long and curved horns wildebeests are known for can be found on both males and females. They use these horns to fend off predators and fight for territory rights.

3. Not all wildebeest are migratory

In the Ngorongoro Conservation Area in Northern Tanzania most animals are sedentary, while there are other populations in the Maasai Mara game reserve that also don’t take part in the great migration. 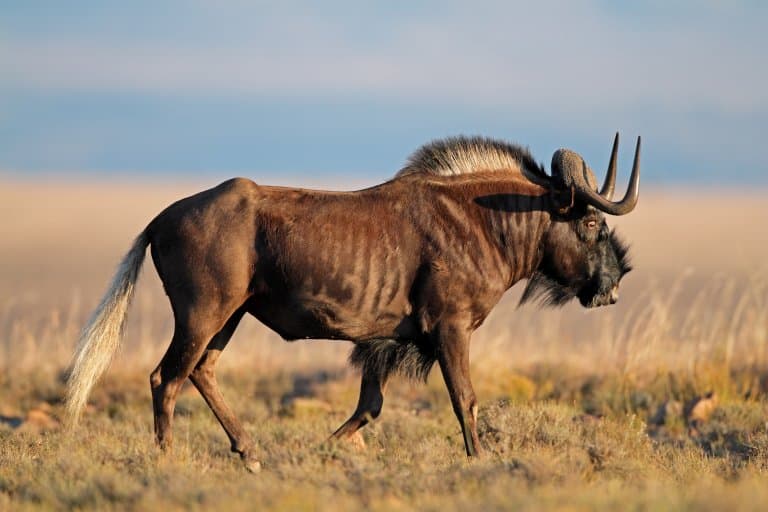 4. Thousands of wildebeests perish each year during the great migration

In eastern Africa, an average of 6,250 wildebeests drown in the Mara River per year. This represents around 0.5% of the herd.

Around 200,000 of the weakest wildebeest and zebra will die during the migration due to starvation, disease or over excursion – outside of predation.

This is, however, advantageous for other animals in the ecosystem including buzzards, lions, cheetahs, crocodiles, and other predators.

The decomposition of wildebeest corpses also serves as a much-needed source of phosphorus and other nutrients for surrounding rivers. 2

5. Their name was inspired by their rugged appearance and impressive strength

The name ‘wildebeest’ quite literally means ‘wild beast or animal’. It was created when Dutch explorers settled in South Africa. 3

6. Their gestation periods are about the same as humans

Mothers carry their young for approximately eight and a half months before giving birth.

7. Calves learn to walk within minutes

Within minutes, wildebeest calves gain their footing and become capable of walking alongside the herd. This instinct is essential to keeping alive. At birth, they can weigh between 44 to 49 pounds. 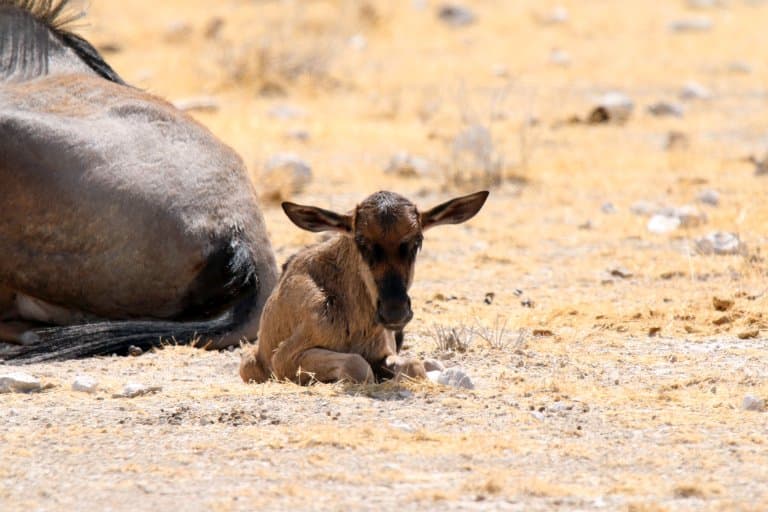 8. They are neither diurnal nor nocturnal

Wildebeests are active through the day and the night. The herd is constantly moving and looking for new grazing areas.

They have also learnt to sleep at different shifts, so some members of a herd are always awake and alert for predators, while others rest.

9. You can hear them from over a mile away

Male blue wildebeests can bellow extremely loudly. Their roars can be heard from up to 1.25 miles (2 kilometers) away. Male wildebeest sometimes fight for dominancy and access to females.

10. In African savannas, they are a keystone species

Wildebeests are one of the most successful herbivores in Africa. They are a keystone species, which means the sustainability of their ecosystem is largely dependent on them. 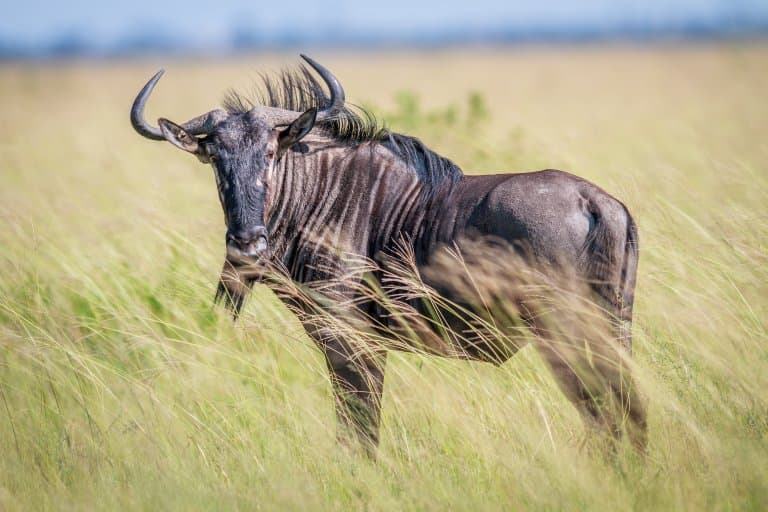 11. Most females within a herd will give birth at around the same time

A large majority of females in a herd (about 80 percent) will give birth to their calves within the same two to three week period. 4

12. Herds are highly dependent on water

Unlike other savanna animals, wildebeests require water almost daily. The movement of their groups often hinges on where the closest available water source is.

13. They are friends with zebras

Wildebeest and zebras will group together in open savannah and grasslands, as it helps reduce the risk of being hunted and killed by many predators, such as lions, hyenas, African wild dogs, cheetahs and leopards.

Wildebeest can also listen to the alarm calls of other species, such as baboons which can alert them to potential predators.

14. Males stray from their herds and form new homes as they age

When they reach a year old, males will leave their original herds and join what are called ‘bachelor herds’ made up of only male wildebeests.

Once they reach 4 to 5 years of age, they become territorial and will wander off to form new herds. At this age, male wildebeests are highly aggressive and will often engage in altercations with other males.

15. Calves are not born with stripes

Young calves are more yellow and tan compared to their adult counterparts. They will develop stripes around 2-3 months.

16. Wildebeests can host a wide range of diseases and parasites

The blue wildebeest has been documented to be a host to over 10 nematodes, several species of flies, lice, and ticks, as well as the larvae of a worm.

In certain parts of Africa, wildebeest populations are at risk due to habitat fragmentation – the division of land for agriculture and human expansion.

Watering holes are often eliminated, and herds are forced to depart and search for alternate sources. 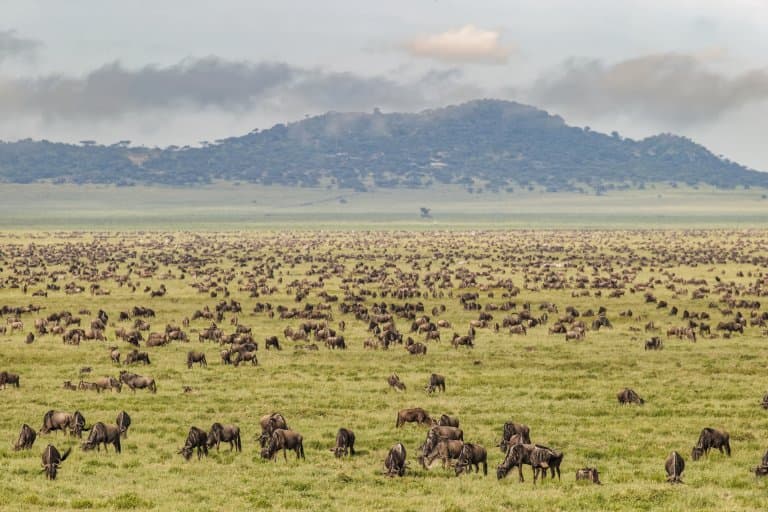 18. They are considered a delicacy in some parts of the world

In Africa, wildebeest meat is sometimes used to make biltong, an air-cured meat that is seasoned and, at times, preserved in vinegar.