The white bellbird is part of a team of suboscine passerines commonly seen amid the pristine mise-en-scène of the obscenely green ravines and other similarly serene and steamy scenes of the Guianas Rain Forest. But what does this mean?

Well, it’s an extremely loud species of songbird from South America. And it’s living in one of the best places on Earth. 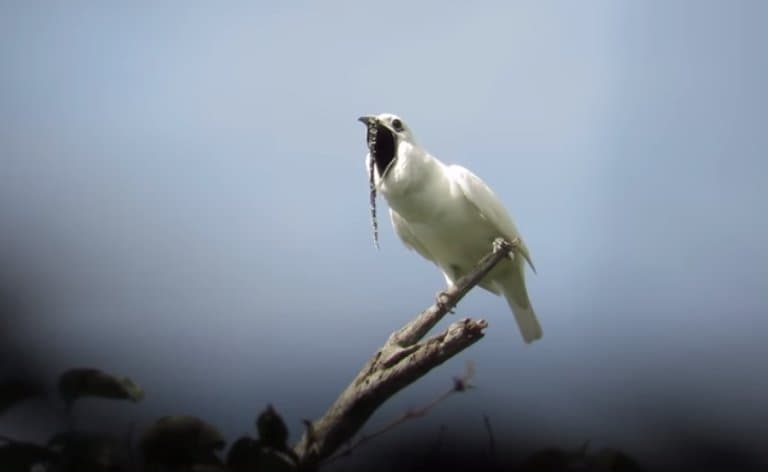 The white bellbird lives in some of the most fascinating and unexplored forests in the world, and very little is known about its behaviour and dietary range, or really what it does and where it goes.

It inhabits moist tropical and subtropical rainforests in the Guianas, as well as smaller numbers also in Venezuela, the Brazilian state of Pará, Trinidad and Tobago and Panama.

They white bellbird grows up to around 28cm (11 inches) in length, and males have white feathers with a black bill. Females are more olive in color, and resemble other bellbirds.

They are difficult to observe and like to sit at the top of trees. They have wide mouths and diet on fruit and berries whole, and may also eat a small number of insects.

To say that this animal is very noisy for its size would be an understatement. Because of this, it has a handful of weird adaptations to its beak, musculature and head.

It also has a bizarre appendage that led to some comical depictions that survive to this day.

1. They are called ‘Bellbirds’ due to their call

Bellbirds are named after their mating calls or ‘birdsongs’. They sound like a cross between a bell, and an alarm! Only males vocalize.

2. It’s the loudest bird in the world

For mating, the males use the strategy of screaming at the female at point-blank range. When the female lands near the male, he turns towards her and gives her an acoustic belt in the face.

It’s not quite understood why, other than that this is a likely demonstration of physical strength, but the females seem to prefer the most deafening calls and tolerate the hearing damage well.

White bellbirds can be heard miles away, and produce a sound that’s dangerously loud, at 124 dB! This is louder than a chainsaw, and a rock concert – and is considered unsafe for human hearing!1

3. It has an incredible home

Aside from being breathtakingly beautiful, the forests of the Guianas are extremely ecologically significant. The vast majority of the land mass (85%) is covered in forest, and it has some of the lowest rates of deforestation at less than 1% (dropping as low as 0.048% in 2017!).

It’s got 1815 currently known species of animals, including over 850 species of fishes, and over 8000 flower species and contains montane, evergreen, seasonal and rainforest cover.

Much of what exists here has yet to be studied at all. What little is known about the white bellbird suggests that they are numerous and as such, they’re considered ‘of least concern’ by the IUCN.

These forests are one of the last relatively-undisturbed sections of their kind left in the world, and they hold a lot of promise for ecological research if they can continue to be protected. 2

4. They fling their dangling wattle for attention

We all know someone who does this.

The male bellbird has a big flappy wattle hanging off its face that looks like it would really become annoying, and when they want to be spotted, they flap it around, which seems to make it more engorged with blood, extending it from its 7cm flaccid length to an impressive and semi-turgid 13 cm (5 inches).

This wattle led to some confusion in the early days of their discovery as it was assumed by artists and researchers alike (from the dead specimens brought back) that it was capable of standing to attention. 3

As a result of a passage in the explorer Charles Waterson’s Wanderings, some… mistakes were made.

The dubious passage reads as follows:

“On his forehead rises a spiral tube nearly three inches long. It is jet-black, dotted all over with small white feathers. It has a communication with the palate, and when filled with air, looks like a spire; when empty, it becomes pendulous.”

Interestingly, almost everything in this passage is just false. The wattle is not a spiral, nor is it attached to the palate.

It doesn’t fill with air, and maybe it’s just a result of performance anxiety on behalf of the bird, but it’s never been witnessed fully erect.

There are suspicions that the famous wanderer might have filled in a few gaps in his knowledge with the help of some imagination, but regardless of where the flaw originated, it took off. 4

6. This has led to some embarrassing taxidermy

If women had been allowed to discover things back in those days, we may have been rewarded with a very different-looking bird. As it is, Waterton’s initial mistake was enduring, and even showed up in some of Darwin’s work later on.

The popularity and fame of Waterson may have had something to do with how the mistake propagated through natural history museums for so long and is certainly to blame for the unicorn birds on display in more than one collection.

7. It packs some serious muscle

There is one area in which this bird is legitimately well-endowed. In 2017, a particularly enthusiastic curator of birds specializing in the Amazon rainforest finally got his hands on a specimen of the white bellbird. While giving one a squeeze, he noticed something strange about how meaty it felt.

Most flying birds need to be extremely economical with how they put on weight. Flying is very tiring, so they generally have slender, lean muscles. But this bird seems to have a six-pack and pecs. The musculature around its core appears to be either responsible for, or a result of, the exceptional pipes on the male bird.

The white bellbird has a particularly wide beak, which allows it to swallow fruits whole, and researchers believe this might also play a role in allowing it to sing so loudly.

This entire field of anatomical adaptations to producing (and having to listen to) the loudest bird call in the world is still in its infancy, and the white bellbird offers a rare insight into some of the quirks of sexual selection and its ability to create exaggerated traits such as this. 5