Walrus are huge, sea dwelling mammals found in the seas of the Arctic. They are a pinniped, meaning they are a fin-footed mammal, with their limbs modified into flippers, the same as seals and sealions.

There are two subspecies of walrus, the Arctic walrus and the Pacific walrus. They are generally geographically isolated from one another, with the Pacific walrus being larger than the Atlantic and having significantly longer tusks and a larger skull. 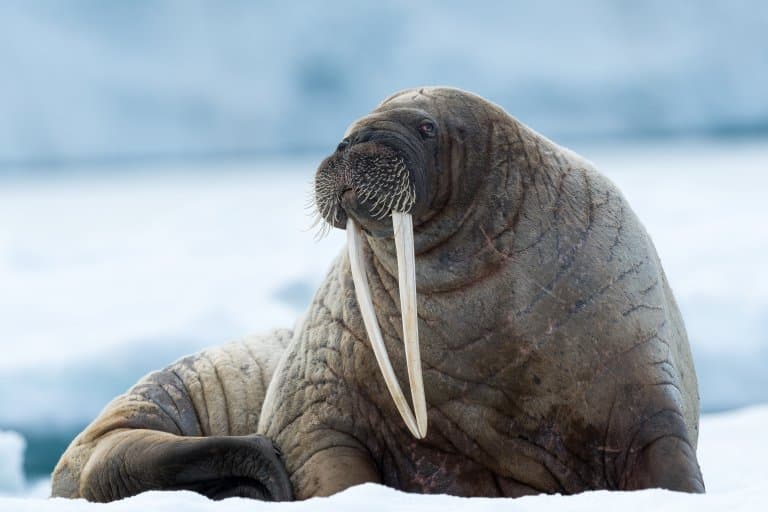 The Atlantic walrus inhabits the northern waters of Canada, Greenland, Norway and Russia. The Pacific walrus subspecies has a wider range, between Russia and the US (Alaska). Some scientists believe there is a third subspecies, based around the Laptev Sea in the Northern Pacific Ocean.

Walrus are large and typically weigh between 800-1,700kg, but exceptional bulls can weigh up to 2,000kg. They are 2.2 – 3.7m in length and the third largest pinniped species, after elephant seals.

What makes a walrus so recognisable is its sheer size and huge tusks, which they use for numerous purposes, such as creating breathing holes in ice, hauling themselves out of ice, and fighting to name but a few.  Another prominent feature of the walrus is the large amount of bristles on their snout. These are known as vibrissae and are very sensitive, which makes them perfect for brushing along the ocean floor in search of food.

Walruses are opportunistic feeders and feed in fairly shallow waters up to 100m deep. They eat a variety of seafood including molluscs, clams, octopus and squid. The tissue of seals have even been observed in the stomachs of walruses in the Pacific.

Walruses are very social animals and will congregate in ‘herds‘ on land or sea ice. They mainly come together in larger groups on land to rest, breed and to feed their young. In these large groups they remain close to one another to help keep warm.

They feed for days in the ocean and afterwards use land as a resting spot, sleeping for many hours if necessary before going out to feed again for long periods. Sea ice is mainly used as a resting spot, usually between feeds, in the areas that they are diving for food.

Walruses will migrate and follow ice floes to help them determine where to feed. This is so they have places to rest in-between diving, however with climate change causing many areas of ice to melt, they have to travel longer distances to land and at times the younger calves do not make the journey.

1. Walrus are hunted for many of their body parts

In some areas where walruses reside they are permitted still to be hunted, while in other areas it is now banned. Ancient cultures in the walruses range used to hunt them for blubber, hides, meat and some still do hunt them for these items.

If a walrus is killed nowadays it is hoped that none of it goes to waste, even the tusks being made into handicrafts. 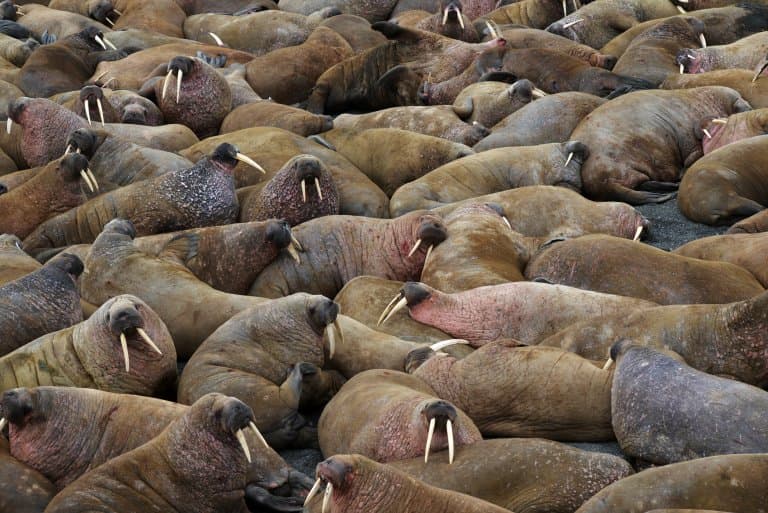 2. Their blubber is 15cm thick

Walruses have a layer of fat up to 15cm thick under their skin.

This helps insulate their bodies in the freezing Arctic waters, but also helps store energy for when they cannot feed (for example mothers who are nursing their young).

This layer of blubber also help keeps them buoyant in the water and gives them extra protection against predators. 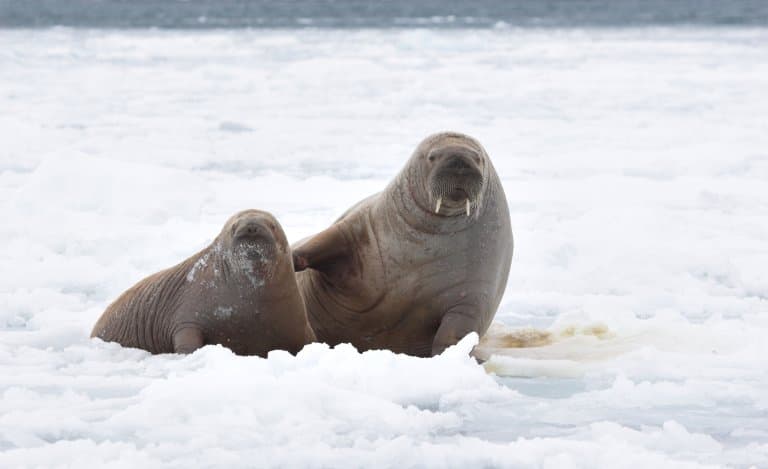 3. Its tusks are elongated canine teeth

The strongest males with the largest tusks tend to dominate and have the highest social status in the group. Tusks help them form holes in the ice and keep these holes open for breathing.

They also help them climb out of the ice and move around on land.

The Inuits nickname for the walrus is ‘toothwalker’. Both sexes have them and they keep growing throughout their lives. If a walrus has a broken tusk it tends to lose its status in the group.

Interestingly, aside from their tusks, walruses have a relatively small number of teeth, around 18 on average within their mouths. 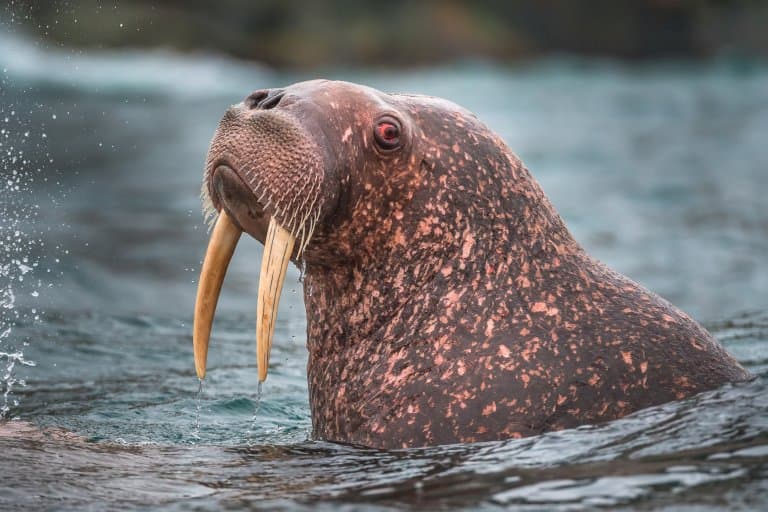 5. Walruses use their whiskers to locate food

Walruses use these whiskers or ‘vibrissae’ against the ocean floor to help locate their food.

They then suck the flesh out of creatures such as molluscs and clams with their large lips, using their tongues to create suction. 1

6. Walruses have an air sac under their throat

These air sacs can be inflated to around the size of a beach ball and act as a flotation device, used when in the water and sleeping.

These air sacs also help the walrus make vocalisations under water too. 2

7. Walruses can slow down their heartbeat

These aquatic mammals can slow down their heartbeat to help them withstand the cold of the water that surrounds them.

By doing this they can also remain underwater for longer periods of time while diving. 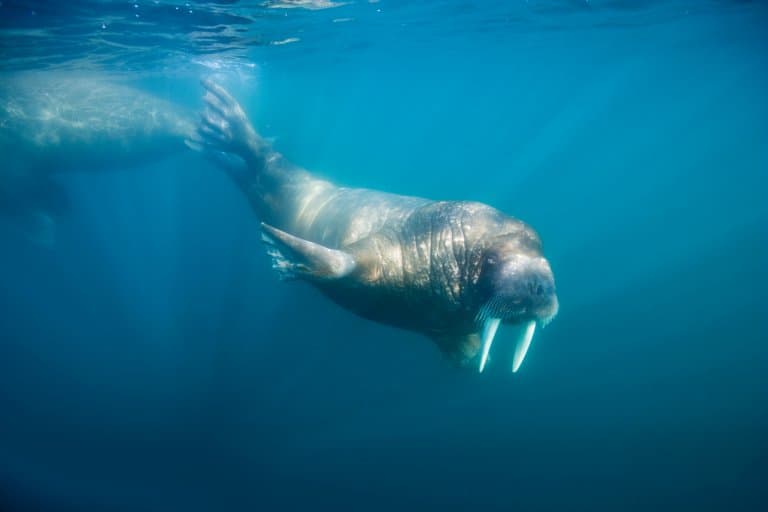 8. Many walrus have scars

Most mating happens between the months of December and March.

Groups of females will be joined by a large male who will display to them in both a visual and vocal way, in and out of the water, with mating usually taking place in the water.

Males will fight for dominance to mate, often injuring each other with their tusks which create scars on the skin. 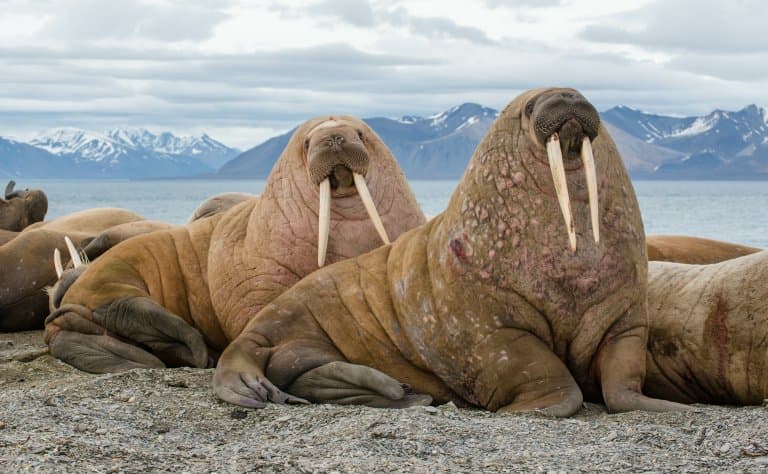 9. Females can delay when they give birth

After mating, the fertilised egg inside the female doesn’t necessarily develop straight away.

They can delay this process for up to 6 months until they have recovered from their previous pregnancy, or until environmental conditions are optimal.

Mothers will also leave the herd to give birth. The reason why is a mystery, but researchers speculate it might be to help protect the calf from predators, as large herds can attract more attention. It may also be to protect against being flattened by huge male walrus in these huge herds.

10. Mothers will cuddle and protect their young

If a mother feels that her calf is threatened she will take it in her flippers and hold it to her body and then dive into the ocean to escape.

11. They huddle together to keep warm

Walrus can be found laying on one another in huge groups, which helps them keep warm in the freezing cold arctic climate! 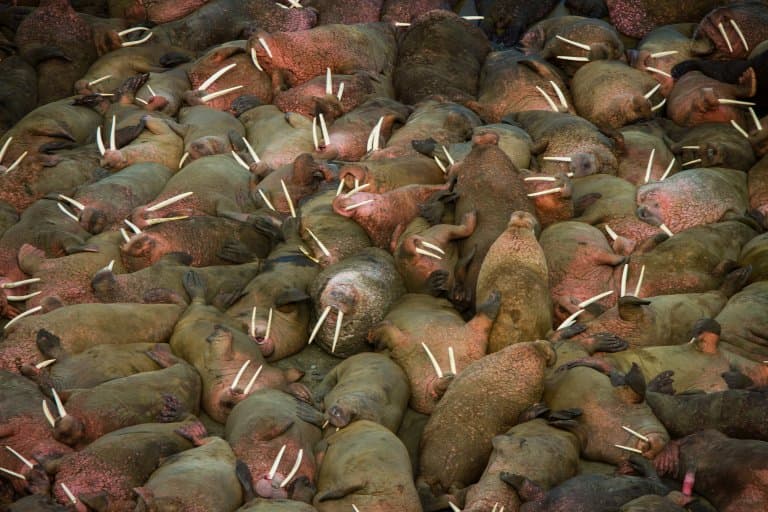 12. In big groups, walruses can stampede

When walruses are found together in large groups, whether for feeding, breeding or giving birth, if something frightens them they will all head straight to water in a mass exodus.

This often results in young calves getting trampled.

With sea ice becoming less available, this has resulted in much larger groups being forced to amalgamate together on land, which can increase the chance of a stampede. 3

Typically walruses don’t grow beyound 4m in length and the Pacific subspecies is larger, weighing around 10–20% more than the Atlantic subspecies.

14. They have been seen fighting with Polar bears

The main predators of walruses are orca whales and polar bears.

Although walruses won’t necessarily initiate a fight with a polar bear, they will defend their young aggressively if needed and there are some recorded instances of polar bears being killed by a walrus.

Orca whales have been seen attacking a walrus and chasing it in the water into the shallows and even onto the shore. 4

15. Climate change is their greatest threat

Melting ice means less walruses have to stay on land, further away from their feeding grounds. More noise and disturbances can also mean these feeding grounds are more dangerous for their calves.

Latest research suggests there’s around 25,000 Atlantic and 200,000 Pacific walrus in the wild today.

16. Walrus are a keystone species

The walrus is known as a keystone species in the areas in which it resides, having a large influence in the environment and keeping the ecological structure of its habitat maintained. This is mainly due to the fact that they are benthic feeders, feeding on marine invertebrates on the ocean floor.

They churn up large areas to find enough food to sustain them and this releases nutrients that would otherwise be buried under mud and silt. This action of mixing up the silt and water exposes more crustaceans and the like to feed other animals which benefits the whole food chain. It also helps release nutrients into the water too.