Since the extinction of the Dodo, the role of the fattest pigeon has been filled by a far more glamorous bird.

One with an overdose of tail feathers, a cute little crown, and above all, the ability to fly. The Victoria-crowned pigeon is a bird in decline, but a popular and easy one to keep. 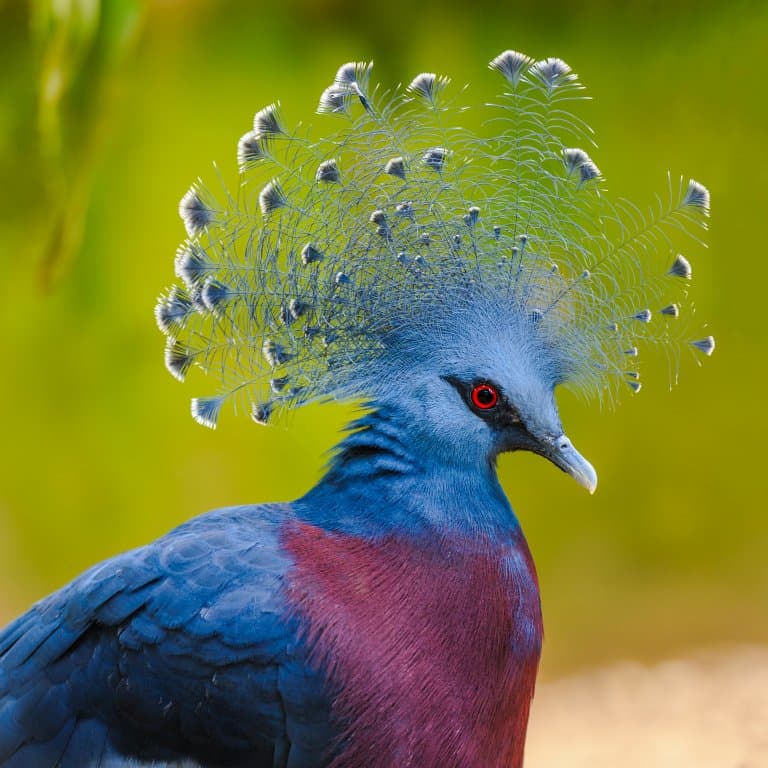 Named after some imperial Queen from the 1800s, the Victoria crowned pigeons are one of the most spectacular pigeons on earth.

A far coo from their embarrassing cousins in London, these birds get to crap on breathtaking island landscapes in and around New Guinea. They inhabit swamp forests and surrounding islands.

They travel in pairs or small groups in search for fallen fruit such as figs, or seeds and insects to eat.

Sadly marked as near threatened by IUCN, they’re in danger of disappearing forever, and are now, possibly, more populous in collections all over the world.

That said, their popularity and capacity to breed in captivity make them unlikely to disappear forever.

Crowned pigeons are the largest wild pigeons left. And among them, the Victoria crowned pigeon is the biggest.

These birds can reach up to 3.5kg, which is a lot for an animal that has to fly, and a lot more than those acorn-munching wood pigeons you might see in the park, who generally top out at 650g. 1

2. They have more tail feathers than usual

Most pigeons have 12 tail feathers or rectrices, and this is the most common number for all flying birds. These feathers are useful for slowing down and for changing direction at low speeds.

In crowned pigeons, their tails have 16 feathers, which represents a 30% increase in tail feathers, and a potential boost to these flying skills.

Whether this is an adaptation to living in confined spaces, or simply a way for the crowned pigeon to show off, is still a mystery.

Other quirks that separate them from other birds are the lack of a gall bladder and oil glands, though it’s not clear what advantage this provides, either. 2 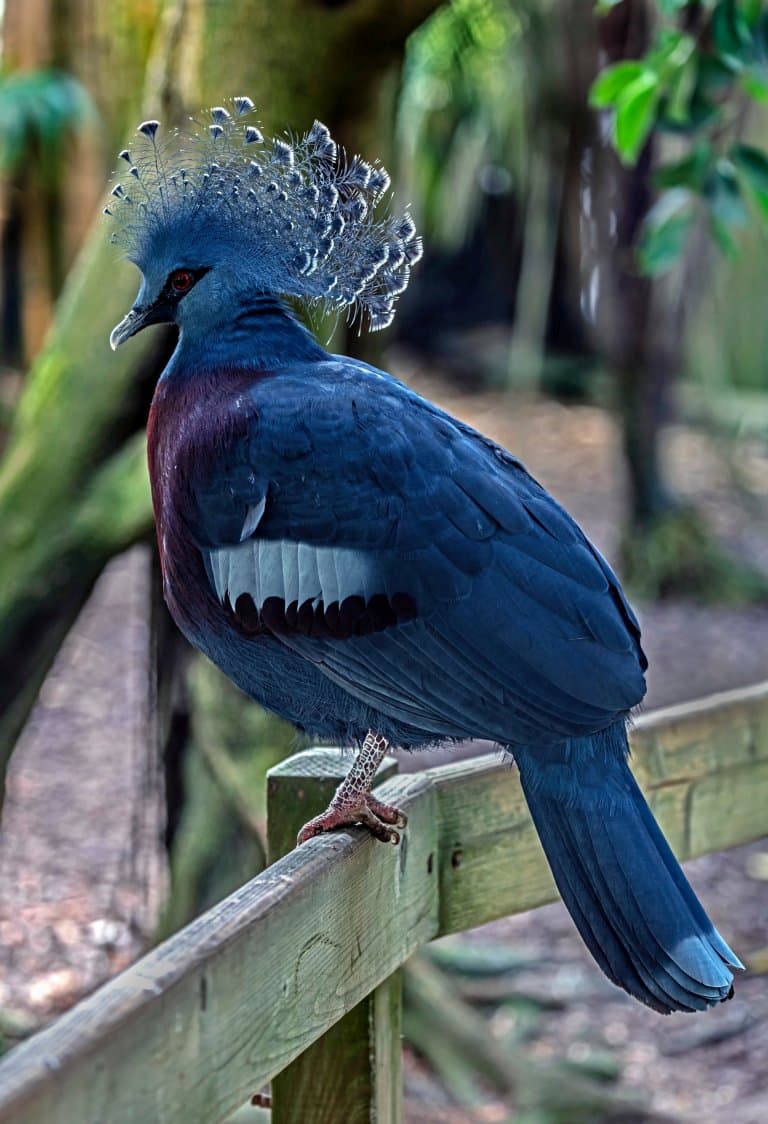 3. You can’t tell them apart

Most of the time when you see a good-looking bird, it has a dull-looking mate. This isn’t true with all birds, but it is a very common theme. In the bird world, it’s more common for the males to have to look pretty and the females get to choose the one they want.

In Victoria crowned pigeons, there’s a certain equity in the beauty standards. Both male and female pigeons are so pretty that you can’t really tell which one is which just from looking at them. As you can imagine, this makes observational studies a bit difficult, but some things can be used to identify which is which.

Males are still more aggressive and dominant during mating season, and the females are typically more passive. The males and females also exhibit different courtship dances, which helps. Using these keys, it’s possible to mark them for study. 3

Like some other birds, and certainly other crowned pigeons, this one exhibits a loud wing clap as it takes off. This is more than just a clumsy by-product of flapping, it’s actually a very clever way of avoiding a vortex called the Wagner effect and improving lift.

Many insects use this method to get airborne quickly, but it’s much less common in larger animals. As the wings come up, they clap together, and as the downstroke is initiated, they’re peeled apart gradually to reduce the vortex that would otherwise be created and reduces the amount of time it takes for the wings to generate lift. 4

Pigeon milk is the term for the regurgitated mass of baby formula from either parent that’s fed to their young. It’s extremely high in proteins and fats, and it’s secreted from the upper digestive tract of the adult pigeon.

Despite the name, it’s more akin to thick cottage cheese than mammalian milk, and though it’s dense in antioxidants and healthy immunity-boosting compounds, it doesn’t sound nearly as appealing.

Still, it is technically a product of lactation, which is a process controlled by the same hormone prolactin in mammals as it is in birds. 5

6. They may be more common in captivity

While they’ve been listed as ‘near threatened’ by the IUCN, their numbers are still in decline in the wild due to logging and it’s estimated that there are between 10,000 to 20,000 individuals left.

However, due to their good looks and quickness to tame, they make popular exhibits at zoos and private collections, and there may be more individuals around the world than there are left in the wild. 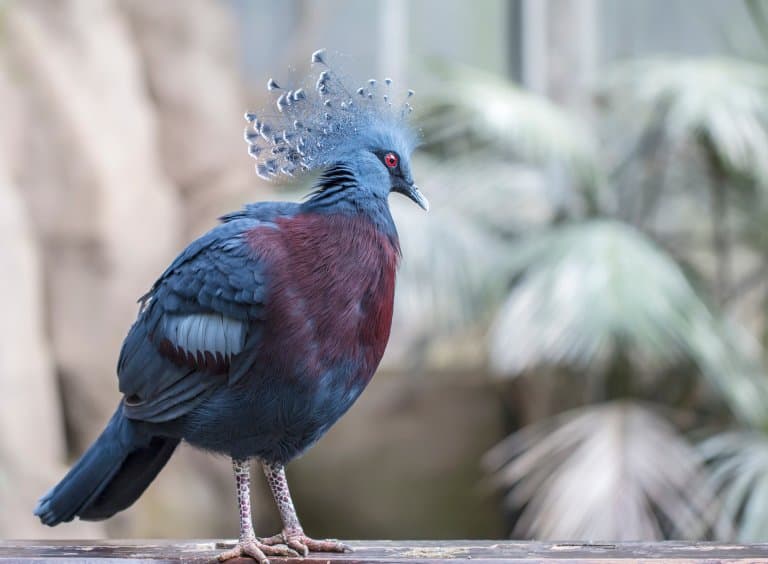 Everyone loves a story of loyalty, but in the animal kingdom, even the biggest ambassadors of monogamy are commonly found to be a let-down. It seems like every time a researcher discovers a life-long pairing between two animals it’s big news, only to be debunked sometime later when a better researcher actually studies more closely (I’m looking at you, swans).

The thing is, a lot of birds look very alike, and though it’s said that the Victoria crowned pigeon mates for life, if researchers can’t even tell the males from the females, this claim should probably be taken with a grain of salt.

What we do know is that it’s none of our business.

Incubation takes about 30 days, and the males and females team up to build nests and sit on the eggs. After hatching the young will stick around for a few weeks spilling pigeon milk everywhere and kicking the backs of seats on aeroplanes before leaving the nest.

What the parents do with their free time after that is entirely up to them.

8. Their biggest threats are human

Human hunting for feathers and meat dramatically reduced the numbers of this beautiful bird, to the point where they are now in need of protection.

While hunting bans have helped, habitat loss is still a concern as oil palm plantations are going up and selective logging pulls trees out from underneath them.