Vervet monkeys are cute, surprisingly human primates. They’re native to the southeastern regions of Africa, but they’re now found in other locations non-natively as well.

They are fairly small, active and agile and have black faces, with grey body hair. They are sometimes referred to as ‘green monkeys’ as they have an interesting green tint to their fur! 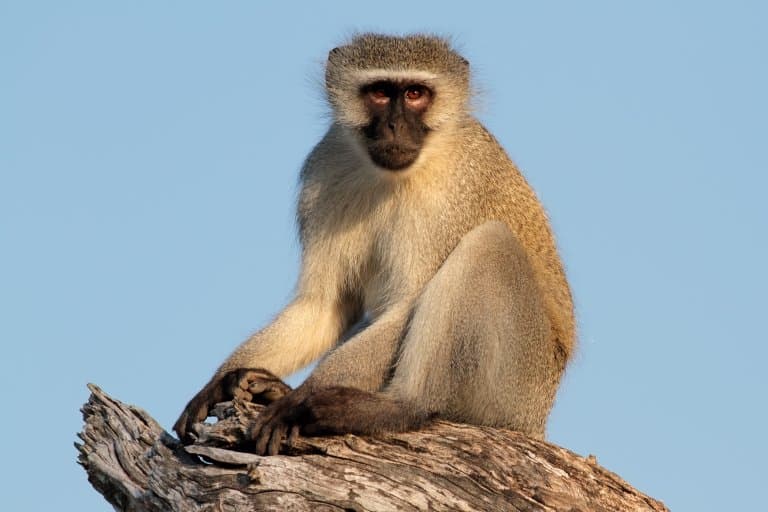 Vervets are considered to be one of the most widespread monkey species across Africa inhabiting 40 African nations, living in forests, near to food and water sources. They can tolerate a variety of habitats from semi-desert environments to swamps. 1

They depend on trees for security, and will sleep together in trees at night. During the morning and evening they will spend their time foraging for food, while in the middle of the day when the sun is at its hottest, they will rest, groom and eat.

Vervet monkeys don’t have a specialized name to differentiate between males and females. However, baby vervet monkey are known as infants. Vervets will join together in groups that are known as troops. While it may seem surprising, troops can have as many as 70 different indvidiual monkeys in each group. Inside a troop, there is a distinct hierarchy that gives each monkey a place and role, with some ranking higher than others.

Vervet monkeys conservation status is classified as ‘least concern’ by the IUCN, as their populations are largely healthy. However, humans are begining to pose a greater threat, with urbanisation, and they are seen as pests by some farmers as they can raid crops.

Sadly they are also hunted and consumed for bushmeat in some African regions, as well as caught and sold as pets.

1. There are several subspecies

Although there is only one species of vervet monkey in the world, there are several different types of subspecies. These are vervet monkeys that have slightly different characteristics from others – not enough for a new species to form, but enough that it is important to highlight their differences.

The five different subspecies of vervet monkey include:

All of the subspecies of vervet monkey are native to Africa. Some are found in different locations, however. For instance, Ch. p. hilgerti is found in southern Kenya. However, Ch. p. pygerythru is more common in South Africa and surrounding countries. 2 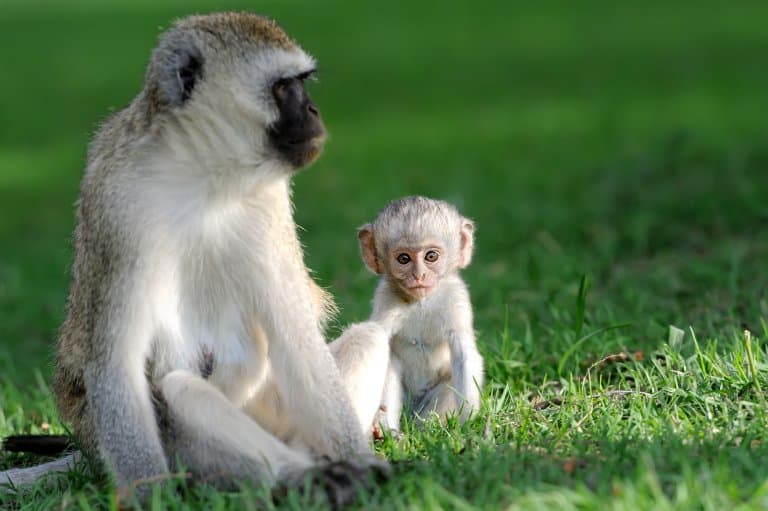 2. Although they are native to Africa, they’ve been introduced to other countries

As seen from the different types of subspecies, vervet monkeys, or just vervets, are native to Africa.

However, this is no longer the only place you can find them. Vervets have been introduced to many new, tropical locations in the western hemisphere, including Florida, St. Kitts and Nevis, Barbados, and Cape Verde.

This wasn’t recent, however. Some sources have shown that vervets were introduced to St. Kitts in the 1600s.

In Florida, however, vervets aren’t nearly as well established. With no native monkeys, the wilderness in the United States isn’t used to providing for primates. The ancestors of the vervets in Florida today escaped from a roadside zoo in the 1940s, and their descendants continue to live there now in four troops of about forty total vervets. 3

Although they’re just distant relatives in the grand scheme of things, vervet monkeys are actually a key factor in studying what it means to be human. Vervet monkeys make a perfect, nonhuman model to study genetics, behavior, and social factors.

Vervet monkeys are vulnerable to a lot of the same conditions as humans. This includes hypertension, anxiety, and even alcohol use. They’ve also been a significant part of biomedical research in the world.

Vervet monkeys love to groom cats and will play and live together in harmony!

5. Vervets have important family units inside of groups

One of the other reasons that ververt monkeys have been such a hot topic to research and focus on is because of their social structure. Vervets come together in troops made up of several different individuals. Females will stay in the same group for their entire lives, but males will move around to neighboring groups. This helps reduce tensions and also keep the population healthy by diversifying the gene pool – but only slightly, since groups stay close together.

While troops are an important social structure in vervet life, this isn’t the only significant unit. In fact, inside troops, family units still prevail. Siblings are an important part of growing up as a vervet.

Brothers have even been known to leave the troop together when going to an adjacent group.

Vervet siblings are actually quite similar to human siblings. There’s an abundance of friendship and support among siblings. However, there’s also a bit of competition as they grow. This is mostly after they’ve weaned and it has to do with who spends the most time with their mother, such as who gets to spend the most time getting groomed.

6. They have different alarm calls

Vervet monkeys are thought to have up to 30 different alarm calls for different predators and situations.

In the wild they have been observed having a different call for a human, in comparison to each of their known predators, leopards, eagles, pythons, baboons and dogs.

This has led researchers to believe this helps them distinguish between different threats. At any sign of danger, vervet monkeys will escape to the trees for safety. 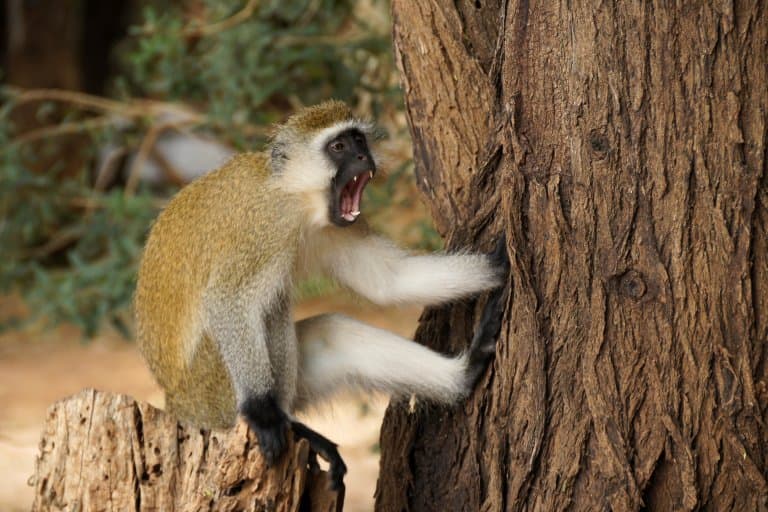 7. They have been observed to act out of spite

Spite isn’t really a thing in the animal world. Animals don’t have morals, and they act out of instinct, not out of what’s right versus wrong.

Vervets, however, have been shown to act out of spite.

Let’s view this situation. There are two rival groups of vervet. One group has an abundant storage of food; the other does not. Now, nature would say that the group without would steal to feed themselves. However, vervets have actually been recorded doing things like destroying other troop’s food supply if they’ve been wronged before!

Vervet monkeys in St. Kitts have a taste for alcohol, similar to humans. They raid local bars and steal drinks from holidaymakers and locals for rum.

While some prefer to drink only alcohol, and will become drunk, many have a preference for soft drinks and non-alcoholic beverages.

9. They have bright blue testicles

Why their testicles are blue is not entirely understood, however they’re likely linked to sexual selection. It’s thought those with the most vibrant scrota attract females! 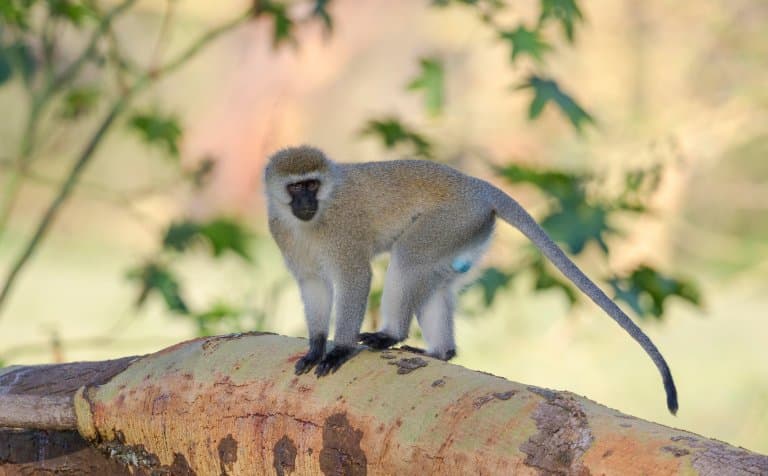 10. Vervets were present in ancient Egypt

As an Old World monkey, ververts have quite a bit of history in the eastern hemisphere of the world.

From artwork to excavation sites dating back as far as 2000 BC, it is believed that vervets were actually common pets in ancient Egypt.